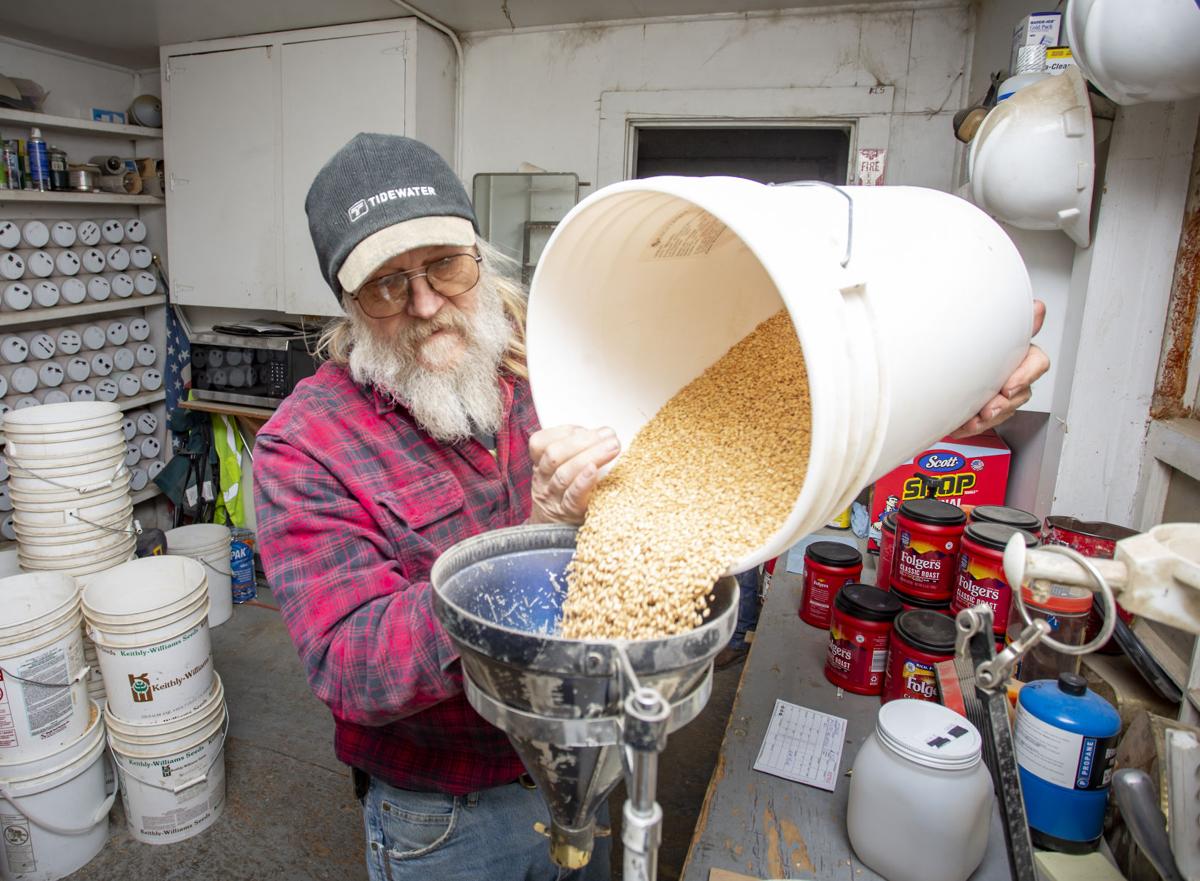 Terry Snider pours grain from a bucket into a funnel while preparing samples of wheat on Tuesday afternoon at Morrow County Grain Growers’ Hogue-Warner grain elevator in Irrigon. 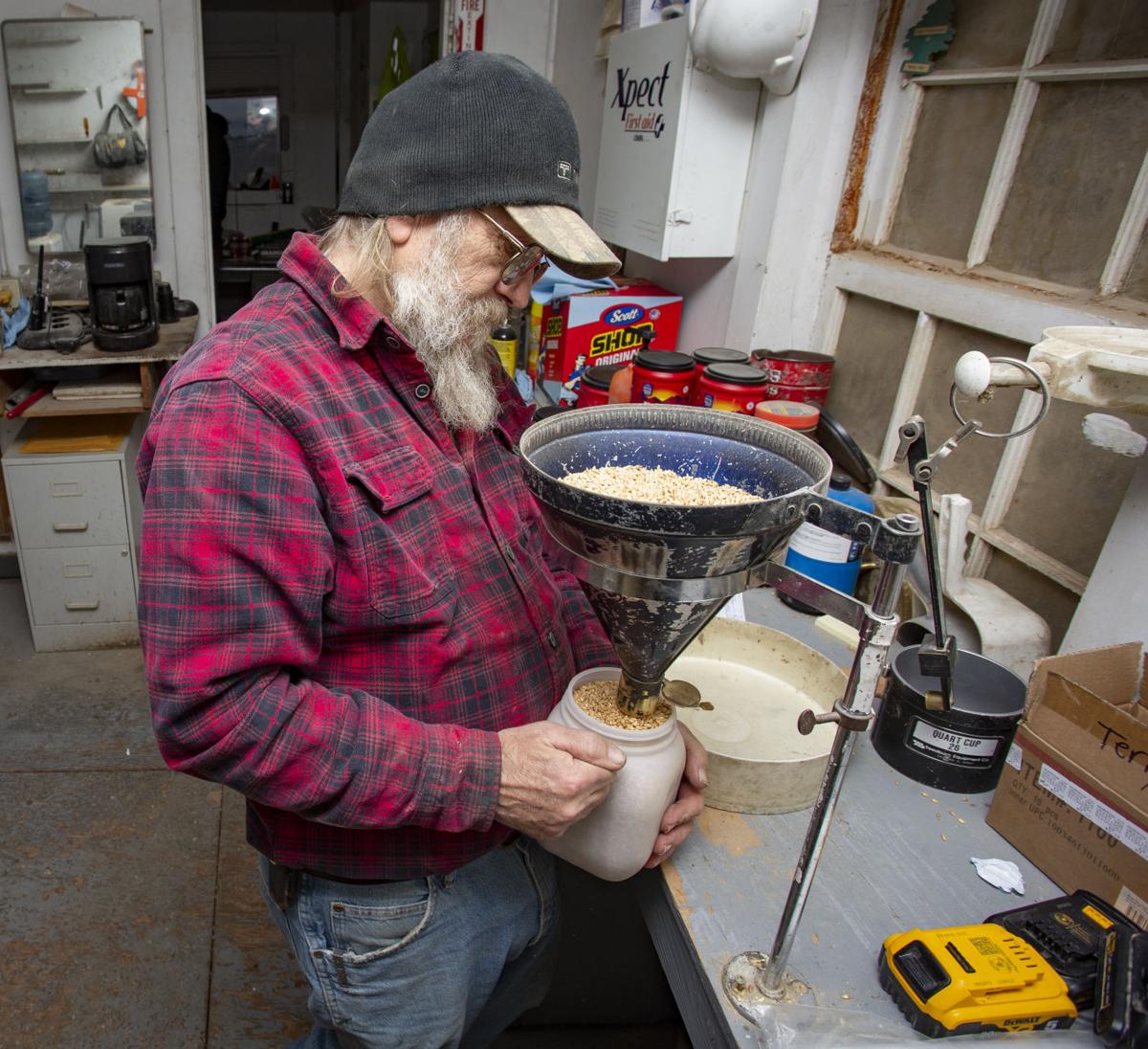 Terry Snider fills a canister with wheat at the Hogue-Warner grain elevator in Irrigon to save as a backup sample of the load. The backup canisters are stored on-site in case a farmer is not satisfied with the grading that their wheat receives. 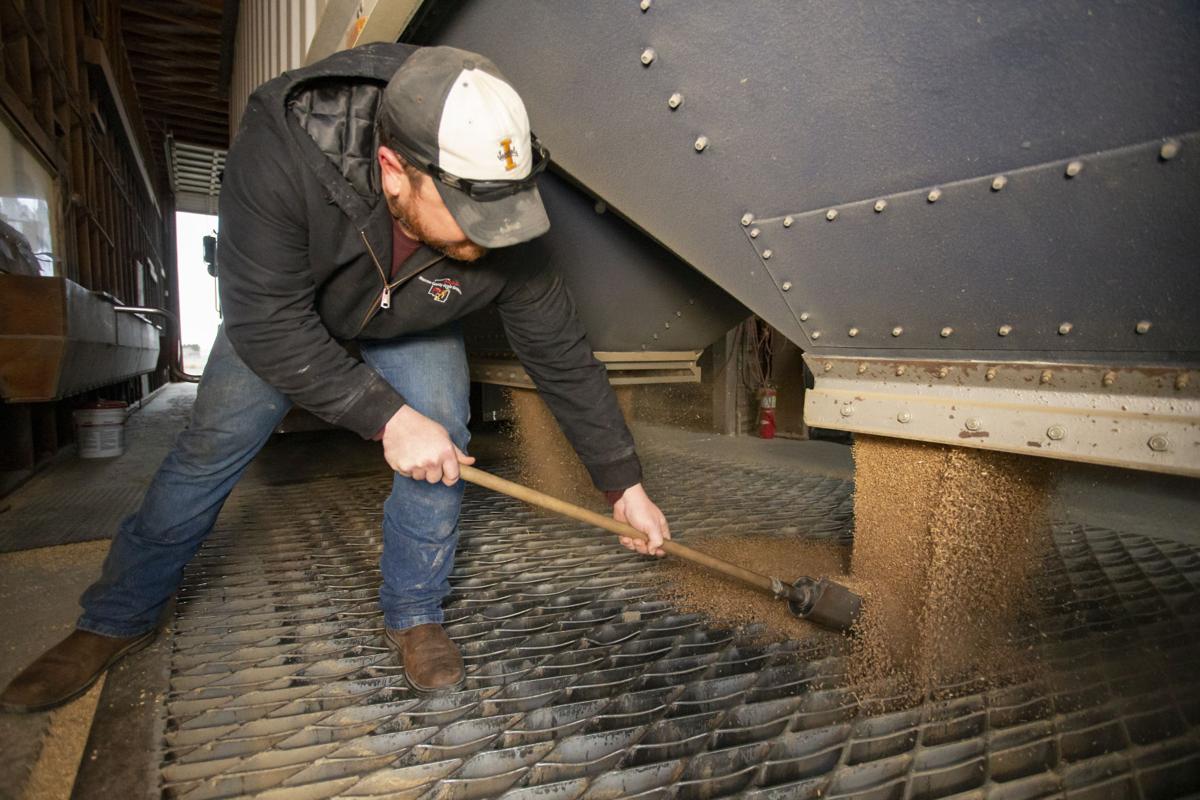 Terry Snider pours grain from a bucket into a funnel while preparing samples of wheat on Tuesday afternoon at Morrow County Grain Growers’ Hogue-Warner grain elevator in Irrigon.

Terry Snider fills a canister with wheat at the Hogue-Warner grain elevator in Irrigon to save as a backup sample of the load. The backup canisters are stored on-site in case a farmer is not satisfied with the grading that their wheat receives.

The program was recently developed in collaboration with the Port of Morrow and Morrow County chambers of commerce. It serves as a hub for businesses in Morrow County that are interested in providing paid internships, or that might already have those opportunities.

“We feel like our role is to make connections. Here’s everything we know about internships in one place,” said Port of Morrow Workforce Training Manager Kalie Davis. “People don’t know where to look. This makes it as easy as possible.”

This year there are 58 positions up for grabs, from digital media marketing to vector control. Some partners involved, like Umatilla-Morrow County Headstart, haven’t had an internship program in the past.

With unemployment at a historically low 3.7% statewide, and in the midst of continuous population growth across Morrow County — including a near 7% boost over the last year, according to Portland State University estimations — businesses are hoping the summer employment opportunities could help keep jobs filled and allow people to try out life in the county.

“We really wanted something that is a career pathway for employers,” Davis said. “And people to have an opportunity to try career paths out.”

Finding places to stay for incoming interns is not an issue far from the minds of those behind the Columbia Works effort, as recent a rise in building permits in some cities illustrates an increased demand for housing.

“We’ve got apartments here that do short-term housing,” she said. “It’s not the most affordable option, but it is an option. We also are having conversations about who might be interested in opening up their house.”

Inspiration for the Columbia Works program hails from west of the Cascades, in McMinnville. The McMinnville WORKS Program began in 2013, and received 159 internship programs in 2019 for 11 partners. For a small industry partner fee, the program hosts weekly workshops, provides marketing for the positions and organizes applications.

Last summer, a cohort group of commercial and community entities banded together to make something similar happen— at no cost to businesses or interns— on the east side of the state that will also include program-wide workshops for the interns.

”We went through developing a program that made sense for Morrow County,” Davis said.

She added that employers are hoping to find a mix of home-grown Eastern Oregonians, but also to find some recent high school graduates or college students throughout the Northwest that want to give Morrow County a chance.

“This is a rural area. We do want to make sure that people have an opportunity to try out living here,” she said.

Beef Northwest has three open positions for this summer. Director of Human Resources Kirk Jacobson said because the company hosts interns each year, they’ve been helping guide other companies in Columbia Works to develop comprehensive internships.

“I think the neat thing is there are companies involved that haven’t traditionally had internships. That’s good for our area, to have more internships. There are some synergies that can be gained,” Jacobson said.

He added that a good internship provides learning objectives. At Beef Northwest, each intern spends two weeks in relevant departments. Each internship ends with a company-wide presentation and a project analysis.

“It’s real world stuff and oftentimes we implement the project they work on,” Jacobson said.

And if all goes well, those interns leave with a job offer for when they’re done with their schooling.

“Internships are really important. A lot of people don’t understand the opportunities that exist,” he said.

Harrison said that summer workers can get placed across the county, as MCGG has facilities in multiple cities and towns.

If you want to apply

Those interested in applying for internships through the Columbia Summer Works Program can learn more at https://www.portofmorrow.com/columbia-works.