MythBusters imploded an oil tanker as part of an experiment filmed at the Port of Morrow in Boardman. The episode aired Jan. 16 on Discovery. 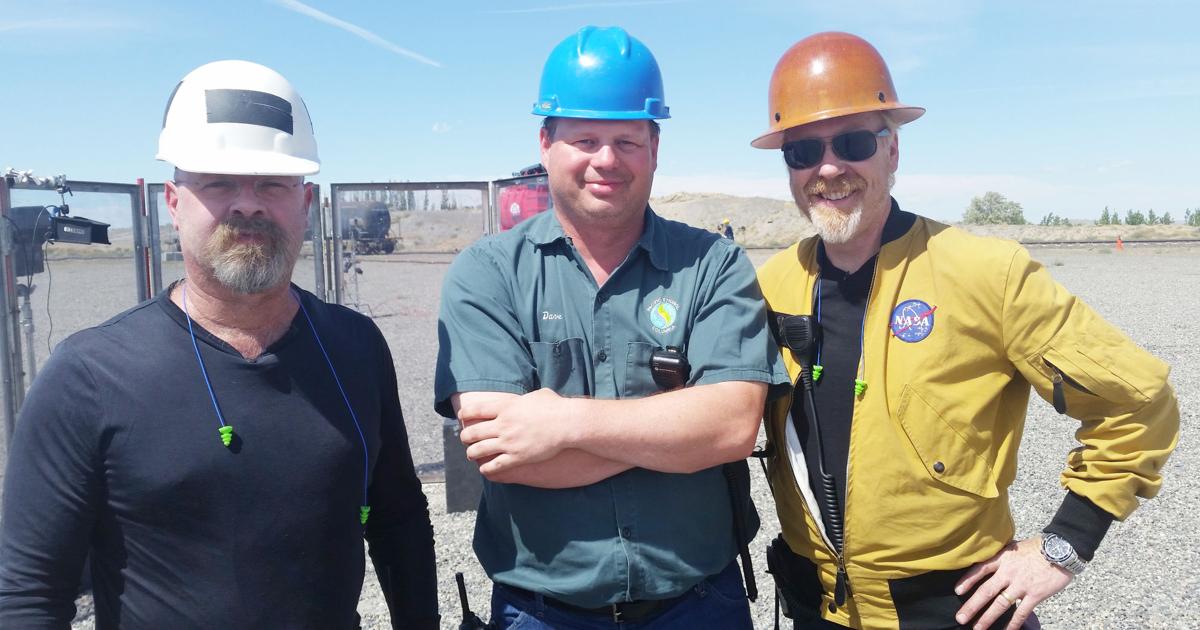 MythBusters imploded an oil tanker as part of an experiment filmed at the Port of Morrow in Boardman. The episode aired Jan. 16 on Discovery.

Six months after the fact, the myth has been confirmed.

MythBusters was, indeed, in Eastern Oregon last year. And the result was one of the show’s biggest experiments yet.

Hosts Adam Savage and Jamie Hyneman spent four days in July at the Port of Morrow in Boardman, testing whether a railroad tanker can actually implode if it’s filled with steam. The episode aired Saturday, Jan. 16 on the Discovery Channel.

The story goes that engineers were steam cleaning a freight train tank car when it started to rain. They sealed the car and went home for the day, but as the rain cooled the tanker, it caused the steam inside to condense and contract — creating a vacuum that crushed the massive steel car.

Producers for the show got in touch with AllTranstek, the largest commercial railroad management and consulting company in North America, to put the myth to the test. But first, they needed somewhere remote to film the segment.

Gino Smith, a quality assurance and hazardous materials specialist with AllTranstek, does trainings with Pacific Ethanol at the Port of Morrow. Smith recommended the site, and put the MythBusters crew in touch with Lyndon Jones, the plant manager.

Jones said he didn’t think twice about welcoming the show to Boardman. With the port’s approval, the MythBusters arrived on Monday, July 13 and wrapped up the evening of Thursday, July 16.

“They were great guys,” Jones said. “It was a good experience overall.”

Now in its 16th and final season, MythBusters has been one of Discovery’s longest running and most popular programs. The show stars Savage and Hyneman, two special effects experts, who use science to prove or disprove popular myths, adages, rumors and even movie scenes.

MythBusters touted the episode, “Tanker Crush,” as their biggest ever logistical operation. For the experiment, AllTranstek coordinated not one, but two decommissioned tanker cars 67 feet long and 10 feet in diameter, with half-inch thick steel walls. The cars were brought to the port and onto a rail loop near Pacific Ethanol’s facility, in view of the Columbia River.

“The river’s a real pretty setting,” Jones said. “They loved it.”

Jones said he checked in on the set periodically, and had two employees spend all week with the crew. Boardman Police Chief Rick Stokoe and several volunteers from the rural fire department were also called in to help.

Firefighters were initially brought in just for emergency medical services, but ultimately took part in the filming. In order to simulate the “rain” portion of the experiment, they used a portable fire monitor to douse the first tanker after it was filled with steam.

After spraying close to 350 gallons per minute for over an hour, the car never buckled. It wasn’t until the next day, with the second tanker, that Savage and Hyneman theorized internal damage to the car might make a collapse more likely.

For this, they used a crane to drop a 3,500-pound concrete block onto the car and lowered the pressure inside with an industrial vacuum. This time, it crumpled like a crushed soda can.

However, since rail tankers are designed to withstand severe conditions and are only susceptible if they’re badly damaged, Savage and Hyneman declared the myth “busted.”

“We got it a little bit on the third try after some manipulation,” Jones said. “It was dramatic.”

Adam Cole was one of four firefighters with the Boardman Rural Fire Protection District who helped out on the project. He said he’s been a fan of MythBusters for years.

“None of us even knew it was their last season,” he said. “That made it really special.”

As excited as he was, Cole said he and others were required to sign a confidentiality agreement and were forbidden from talking about the episode before it went to air. That didn’t stop the rumor mill from swirling, especially after some locals recognized Savage and Hyneman eating at Hale’s Restaurant in Hermiston.

Gary Neal, general manager at the Port of Morrow, said there was speculation that Savage and Hyneman were in the community, but by the time word got around they had already left.

“They were trying to be low key,” Neal said. “There weren’t a lot of people driving by and gawking.”

Neal said he wanted to bring in school classes for field trips to learn about the science behind the project, but was told no. He said they’re hoping to get a copy of the episode to show at the SAGE Center.

Cole described Savage and Hyneman as down-to-earth guys who love their jobs. He said it was a once-in-a-lifetime opportunity to work on the show.

“Who thinks of Boardman, Oregon being on MythBusters, let alone the biggest production they’ve ever had?” he said. “It’s amazing what they can do.”