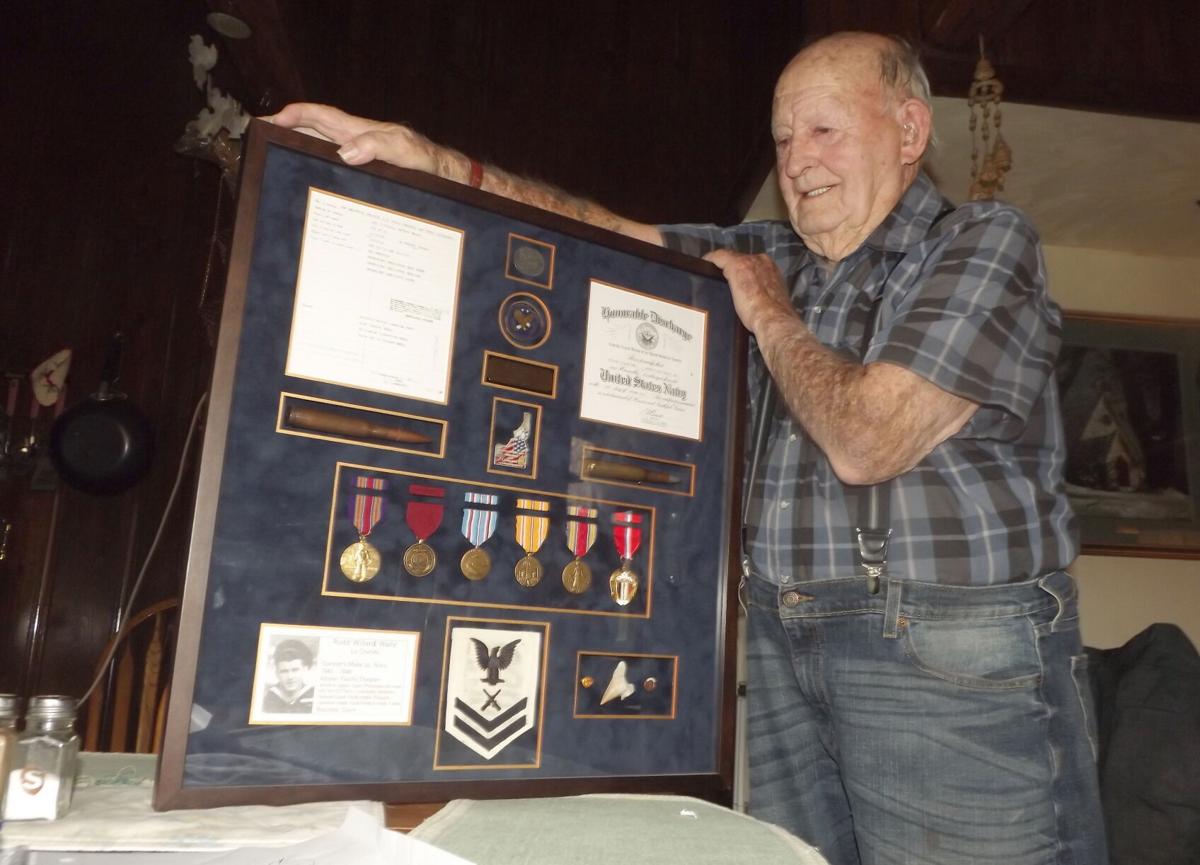 Wally Rudd of Cove shows memorials on Nov. 17, 2020, from his service in World War II. Rudd was a Navy frogman, the precursor to the Navy SEALS. 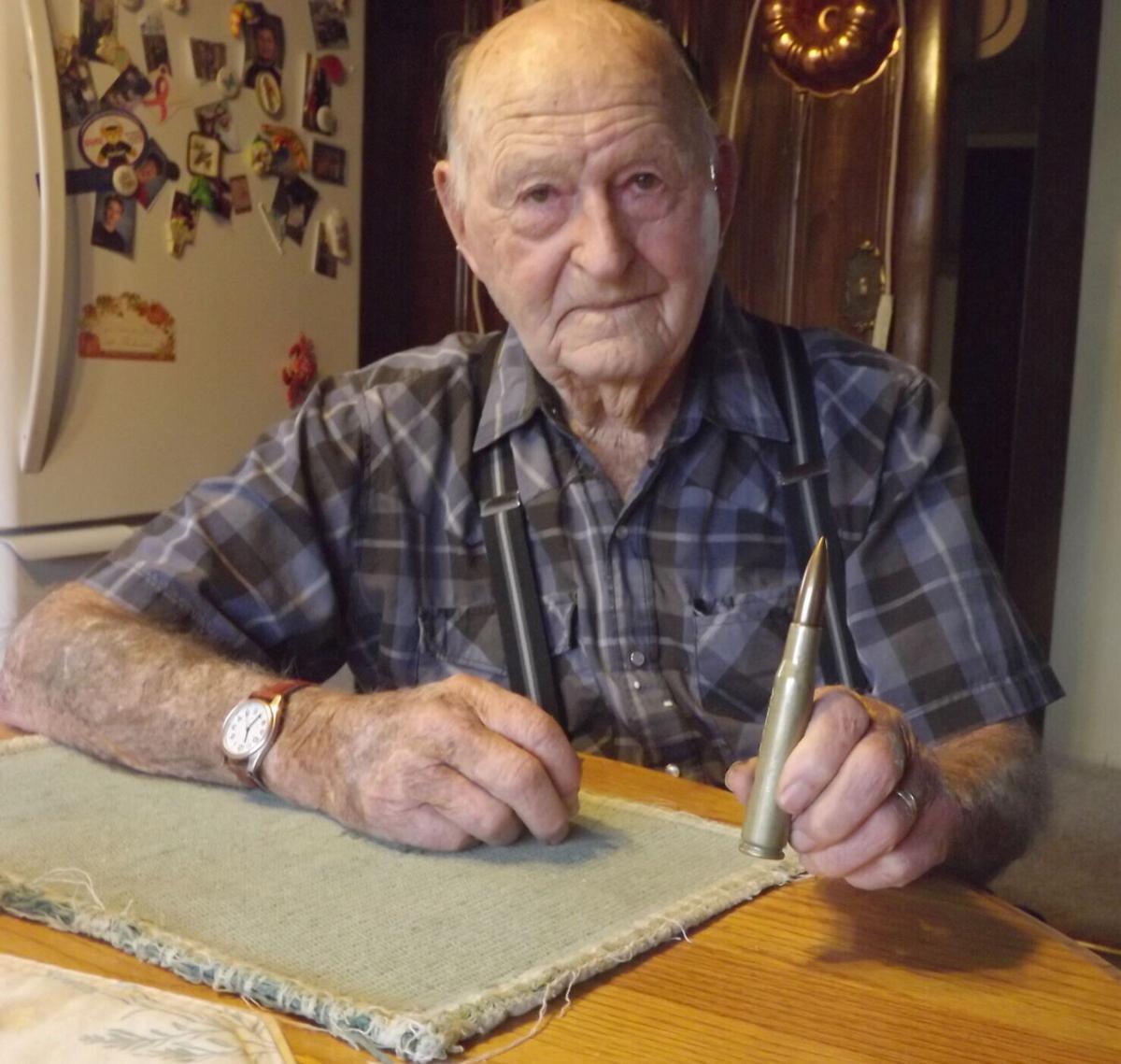 Wally Rudd of Cove holds a 50-caliber bullet on Nov. 17, 2020, at his home in Cove while recounting his experiences while serving as a Navy frogman in World War II.

Wally Rudd of Cove shows memorials on Nov. 17, 2020, from his service in World War II. Rudd was a Navy frogman, the precursor to the Navy SEALS.

Wally Rudd of Cove holds a 50-caliber bullet on Nov. 17, 2020, at his home in Cove while recounting his experiences while serving as a Navy frogman in World War II.

COVE — Almost eight decades ago the hopes of Wally Rudd, a U.S. Navy frogman, were sinking like an anchor.

Rudd, who had just survived a dangerous World War II island mission in the South Pacific, was beginning to wonder if he would ever catch a plane in Guam back to his military base at Hawaii’s Pearl Harbor.

Rudd, who now lives in Cove, had gone weeks without getting a seat on a plane bound for Pearl Harbor because the U.S. military was giving top priority to officers, letters and packages.

A frustrated Rudd then took matters into his own hands — he airmailed himself, postage-free, to Pearl Harbor.

The Navy frogman and a friend snuck onto a plane bound for Pearl Harbor and hid under bags of mail. Rudd said military bosses thought the pair were in with the mail and yelled for them to come out.

“But we didn’t,” Rudd said, “and they never came in and checked on us.”

When the stowaways arrived at Pearl Harbor they were not disciplined as mischievous rule breakers. Instead, their fellow sailors embraced them as though they were long-lost brothers.

“They were afraid that we had died because we had been gone so long,” Rudd said.

This was understandable, considering they were part of an underwater demolition team, one of a number that helped give rise to today’s legendary Navy SEALS. Rudd’s team was responsible for checking the harbors of islands occupied by the Japanese — islands the United States was preparing to invade. The teams checked for coral reefs and obstacles, such as steel triangles the Japanese placed in harbors to sink incoming ships. Rudd often evaded enemy gunfire while swimming in harbors. He said he likely escaped because the Japanese often were firing from 200 yards away and because he made for a small target.

“Often only my head was sticking out (of the water),” said Rudd, who grew up in La Grande.

Still bullets came dangerously close to hitting him, something he could easily see because of how they ricocheted off the waters he was in.

Rudd was a member of Underwater Demolition Team Three. Today, the names of all members of the Navy’s underwater demolition teams, including that of Rudd, are displayed at the National Navy SEALS Museum in Fort Pierce, Florida, said Jack Johnson of Cove. Johnson is a retired Oregon National Guardsman and a good friend of Rudd’s.

Navy SEALS today are equipped with high-tech diving gear including air tanks, which do not emit telltale bubbles. Such equipment is light-years away from what Rudd and the other Navy frogmen had at their disposal during WWII. All they had were face masks, fins and sand shoes — no air tanks or even snorkels.

“Those would have been nice to have,” Rudd said.

In lieu of oxygen sources, frogmen had to work underwater on a single breath. Rudd was able to work three minutes at a time on one breath.

“You can do this if you are in good shape,” he said.

The perils frogmen faced were great, but perhaps not as frightening as the Japanese kamikaze planes that passed over the convoys of ships Rudd was with during South Pacific journeys. The planes often appeared to be diving into the ship Rudd was on, but always hit other crafts in his convoys instead.

Still, Rudd did not emerge from WWII unscathed. He was on one ship a bomb hit. Three pieces of its shrapnel struck Rudd on his right side. The shrapnel burned at first, but Rudd never experienced great pain.

“I had three chunks of steel under my skin,” Rudd said.

Doctors did not remove the shrapnel, which broke down over time.

The Navy frogman escaped serious injury in WWII, but saw many people around him on ships die or suffer grave wounds.

“I would see guys who had really taken a beating, who had no arms or legs or had their belly shot up, but I never heard them moaning. They never said a word. I really admired them,” said Rudd, who has lived in Cove with his wife of 57 years, Marilyn, for 45 years.

Rudd left LHS in 1943 at age 17 to join the Navy. He returned home four years later, but was told by a school staff member he would not be allowed to graduate until he paid for two unreturned library books and a desk he had carved his name in.

La Grande High principal Ron Walk then told the staff member that this was no way to treat a returning serviceman and told Rudd to come back the next day. The following day, Walk awarded Rudd and three other veterans their diplomas.

“If it was not for Ron Walk, I would not have gotten a diploma,” Rudd said.

Although Rudd today is credited with being part of a program that evolved into the Navy SEALS, he humbly said he would not have wanted to serve as one.

“Their training is twice as tough as the training we received,” Rudd said.

Johnson, who has known Rudd for decades, describes him as a delightful, one-of-a-kind person.