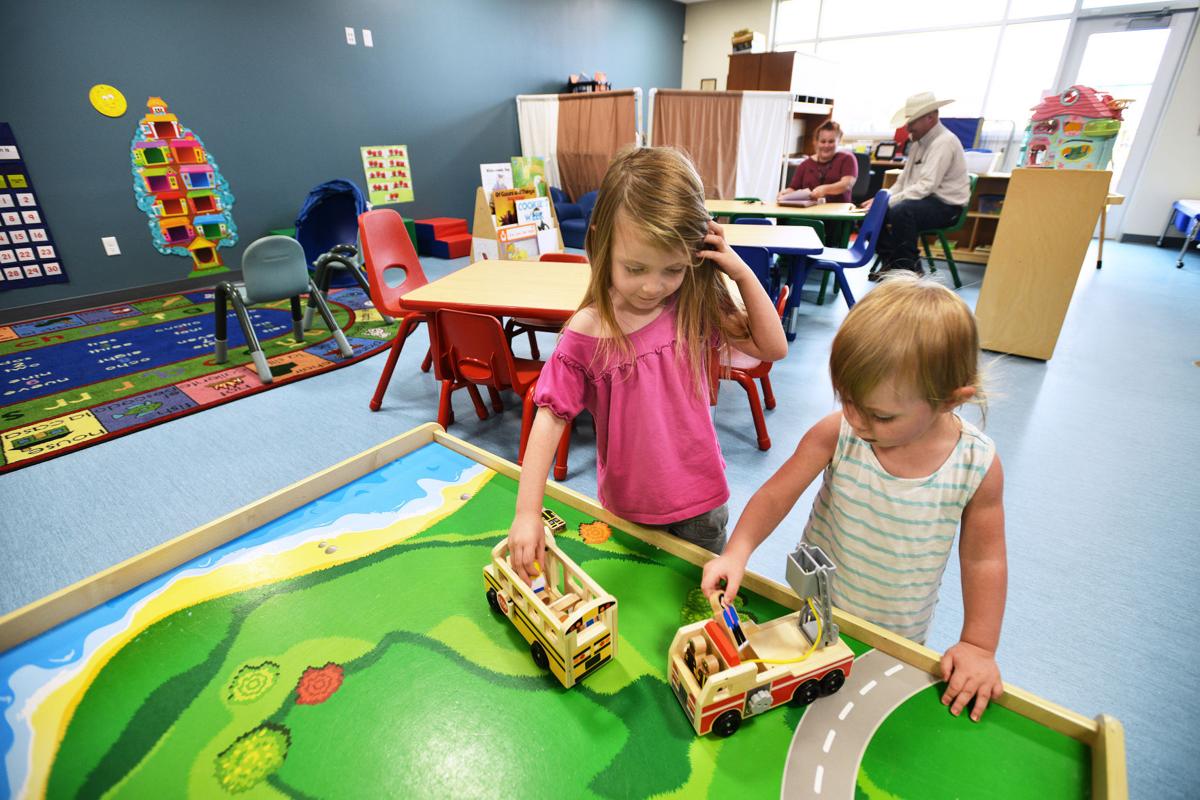 Grace, 3, and Cora Schoerfelder, 2, look at wooden cars at a play station in a classroom Wednesday during a ribbon cutting ceremony for the Neal Early Learning Center in Boardman. Grace Schoenfelder will be attending class at the learning center this fall. 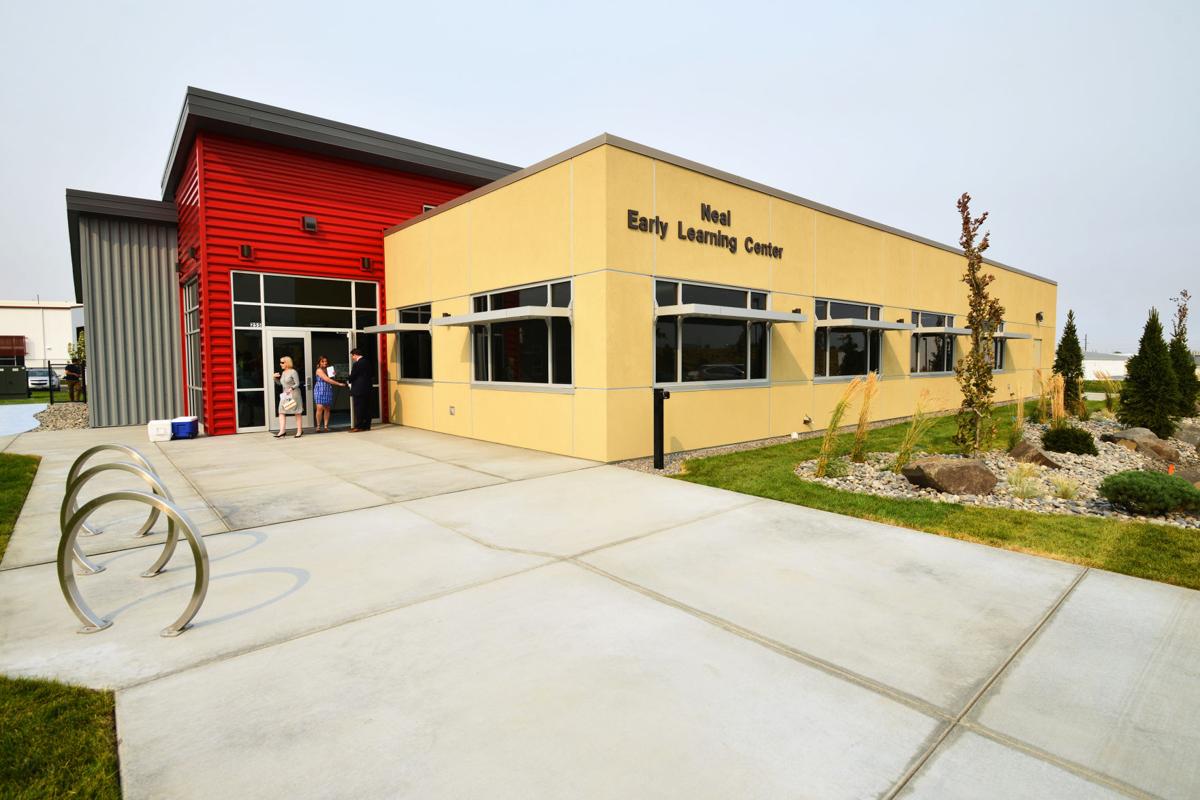 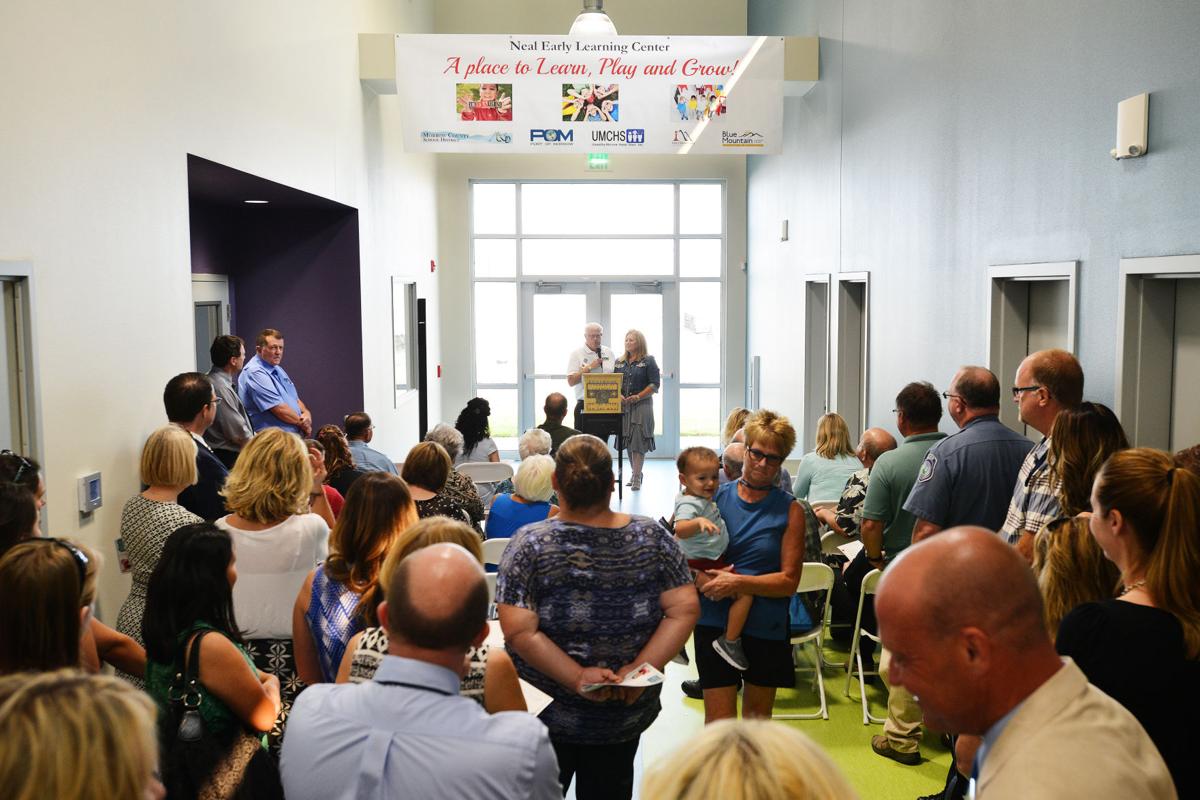 Gary and Kathy Neal speak before a ribbon cutting ceremony for the Neal Early Learning Center on Wednesday in Boardman.

Grace, 3, and Cora Schoerfelder, 2, look at wooden cars at a play station in a classroom Wednesday during a ribbon cutting ceremony for the Neal Early Learning Center in Boardman. Grace Schoenfelder will be attending class at the learning center this fall.

Gary and Kathy Neal speak before a ribbon cutting ceremony for the Neal Early Learning Center on Wednesday in Boardman.

The Neal Early Learning Center will serve as a hub for teaching Morrow County’s youngest residents, but for those who envisioned the center it’s much more than that.

“We’re incubating minds,” said Kathy Neal on Wednesday, making some opening remarks at the new facility’s ribbon cutting. “It’s designed and dedicated to nurture every child in the county.”

The center, a collaborative effort between the Port of Morrow, InterMountain Education Service District, the Morrow County School District and Umatilla-Morrow Head Start, stands at the Port of Morrow in Boardman, adjacent to the Sage Center and Blue Mountain Community College’s Workforce Training Center. Representatives from all those organizations spoke at the event, praising the resolve of those groups to get the project up and running. State Representative Greg Smith, who helped get funding state funding for the project, was also present.

“Innovation in the education world can be slow, and very methodical,” Neal said. “Not in this case. It took two years at the most. That’s unheard of for a ground-up project — it’s lightning-fast.”

Neal and her husband Gary, the Port of Morrow manager, are the center’s namesakes, honored for their role in the project’s planning and execution. Neal proposed the idea of an early learning center to IMESD superintendent Mark Mulvihill in 2015, and the two were able to pull in other entities to partner with them.

The center will be run by Umatilla-Morrow Head Start, and will have three classrooms for those students. There will also be a classroom for IMESD’s Early Intervention, Early Childhood Special Education program, which identifies students who need special services at an early age.

Jason Schoenfelder, a Morrow County resident, said he was excited to have his three year-old daughter, Grace, attend the school starting next week.

“She was part of the IMESD early childhood development (program) in Hermiston,” Schoenfelder said. He also said he was happy with the facility.

“The fact that it’s preschool, and the early childhood development services in one place,” he said.

Angie Hasbell has been a Umatilla-Morrow Head Start teacher for 14 years, and previously taught Head Start at Sam Boardman Elementary School. She will now teach at the new center.

“The facility is beautiful,” she said. “I think it will really address the kids’ needs.”

She said some of the perks of the facility included a bathroom in the classroom, as well as access to a nice outdoor play area.

She added that at Sam Boardman, she was the only Head Start teacher.

“It will be nice to have more to collaborate with,” she said.

The facility will serve more than 80 three to five year-olds, but next door at the Workforce Training Center there will be an area for infants and toddlers, which will be available 10 hours a day for working families.

Neal said she initially envisioned the center in the same building as the Workforce Training program, so that children could learn as their parents were learning. Neal said she couldn’t believe everything had come together so well.

“It’s the most humbling thing in my life, but also the most proud,” she said. “We’re years out before we will know the actual difference it makes, but it will make an immediate difference in kids’ lives.”

Neal, whose background is in real estate and banking, moved to the area in 1989 with her husband.

“We saw the potential in this area,” she said. “We just knew it was going somewhere.”

She added, “Everybody wants to make a difference in some way or another.”

The facility will welcome students next week.