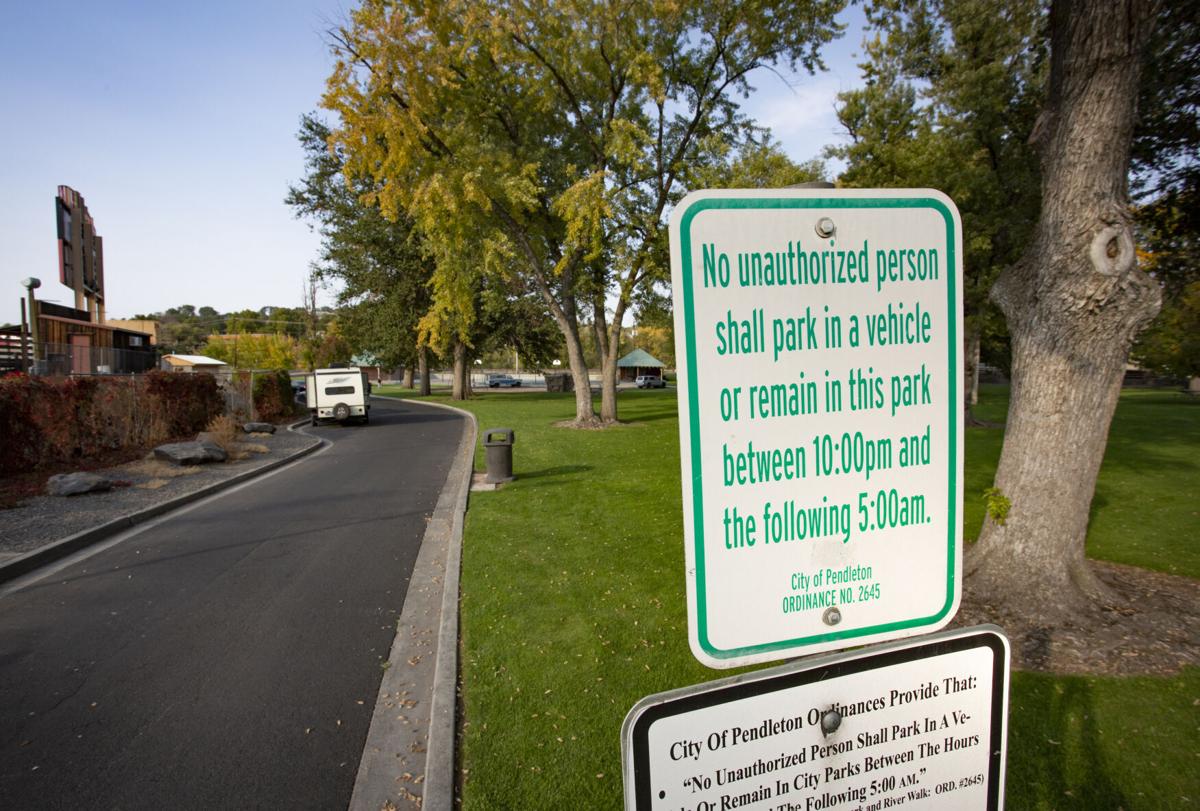 A sign advises visitors to Roy Raley Park in Pendleton that the park is closed between the hours of 10 p.m. and 5 a.m. daily. 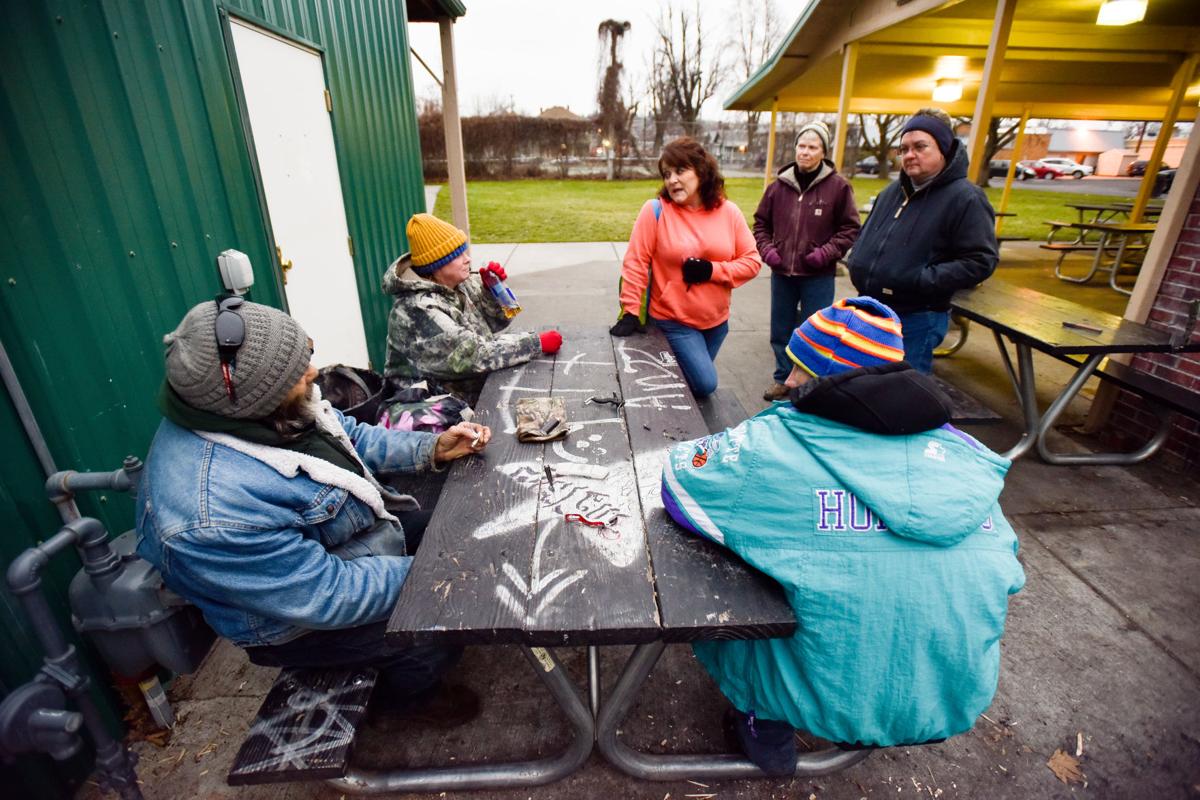 Janet McFarlane, third from left, speaks with a group of homeless people while conducting the point-in-time federal homeless count with volunteers at Stillman Park earlier in the year in Pendleton. 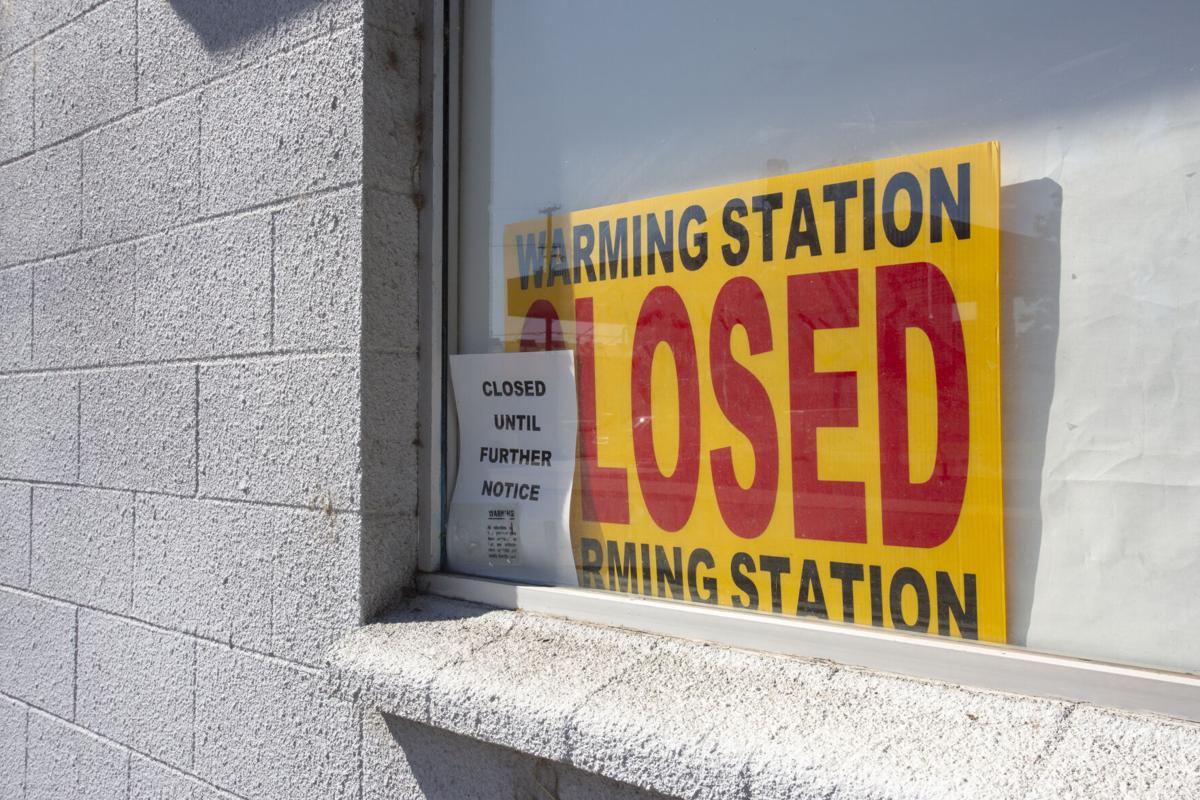 A sign in the window of the Pendleton Warming Station earlier this year advises that the station is closed until further notice due to COVID-19.

A sign advises visitors to Roy Raley Park in Pendleton that the park is closed between the hours of 10 p.m. and 5 a.m. daily.

Janet McFarlane, third from left, speaks with a group of homeless people while conducting the point-in-time federal homeless count with volunteers at Stillman Park earlier in the year in Pendleton.

A sign in the window of the Pendleton Warming Station earlier this year advises that the station is closed until further notice due to COVID-19.

PENDLETON — Starting Nov. 6, the city of Pendleton will allow residents and visitors to sleep outside on city-owned property, provided its not in a park, parking lot, alley or sidewalk and within a designated eight-hour time period.

At an Oct. 6 meeting, the Pendleton City Council passed “An Ordinance Establishing Rules for Temporary Rest on Public Property,” a city law that attempts to create restrictions to homeless camping on public property, while complying with recent federal court decisions that made it illegal to punish people for public sleeping unless there is an alternative option.

City Attorney Nancy Kerns said the ordinance was a collaboration between herself, City Manager Robb Corbett and Police Chief Stuart Roberts. She added it was time to craft the ordinance because they were waiting for the issue to be resolved in the court system.

Starting next month, people will be allowed to sleep on select city properties, although the ordinance is more specific about where they can’t sleep than where they can.

Asked to clarify which public properties people could sleep on, Kerns wrote in an email that there were 203 parcels of city-owned property, and only 23 could be excluded as parks.

But what ended up being a more contentious issue among the council was when people would be allowed to sleep publicly.

The ordinance originally proposed a legal resting period from midnight to 6 a.m., but Mayor John Turner quickly suggested pushing up the start time to 10 p.m., a period that better aligns with the time most city parks are closed. The idea was supported by Pendleton Police Lt. Tony Nelson, who told the council that police would be able to discuss the “ground rules” with the homeless population more easily than if the times were adjusted seasonally.

But Councilor Carole Innes objected to the proposed sleeping period, saying that the hours should be more flexible for the cold weather months when the temperature falls earlier in the afternoon.

“Do you know how cold it gets at 5:30 in the afternoon in December and January and into February?” she said.

While violation of the ordinance could result in fines, Nelson said punitive action wasn’t usually the police’s first move.

“We’re not looking to tell people to get out. We’re looking to educate people,” he said.

Despite Innes’ objections, the council passed the ordinance 6-2 with Councilor Kevin Martin joining Innes in voting against it.

Innes is a volunteer with Neighbor 2 Neighbor Pendleton, a nonprofit that operates a warming station and day center in Pendleton.

Neighbor 2 Neighbor Executive Director Dwight Johnson said he didn’t know that the city had passed a new law. Although he was happy to see some sort of action taken, he was concerned about the 10 p.m. start time for public sleeping.

While the warming station offers a respite for Pendleton’s homeless population during the winter months, there’s some concern around how it will operate this year.

Johnson said COVID-19 means the warming station might struggle to attract volunteers this year and will likely operate at a lower capacity to allow for social distancing. Neighbor 2 Neighbor has applied for grants to offer more hotel room vouchers for shelter seekers, but he hasn’t heard about them yet.

After reading it, American Civil Liberties Union of Oregon interim legal director Kelly Simon was a little more critical of the ordinance.

While she appreciated the city’s desire to change its laws in the wake of the federal court rulings, Simon said the ordinance was still punitive at its core. She said cities should pass laws that are more affirmative in connecting homeless to shelter and services rather than determining what they can’t do.

PENDLETON — Three weeks after announcing his retirement from the Umatilla County Assessment and Taxation Department, Paul Chalmers said at a T…

Great news about the parks !!!

Didnt the motel idea turn out to be a disaster last time? A big drug bust I believe.