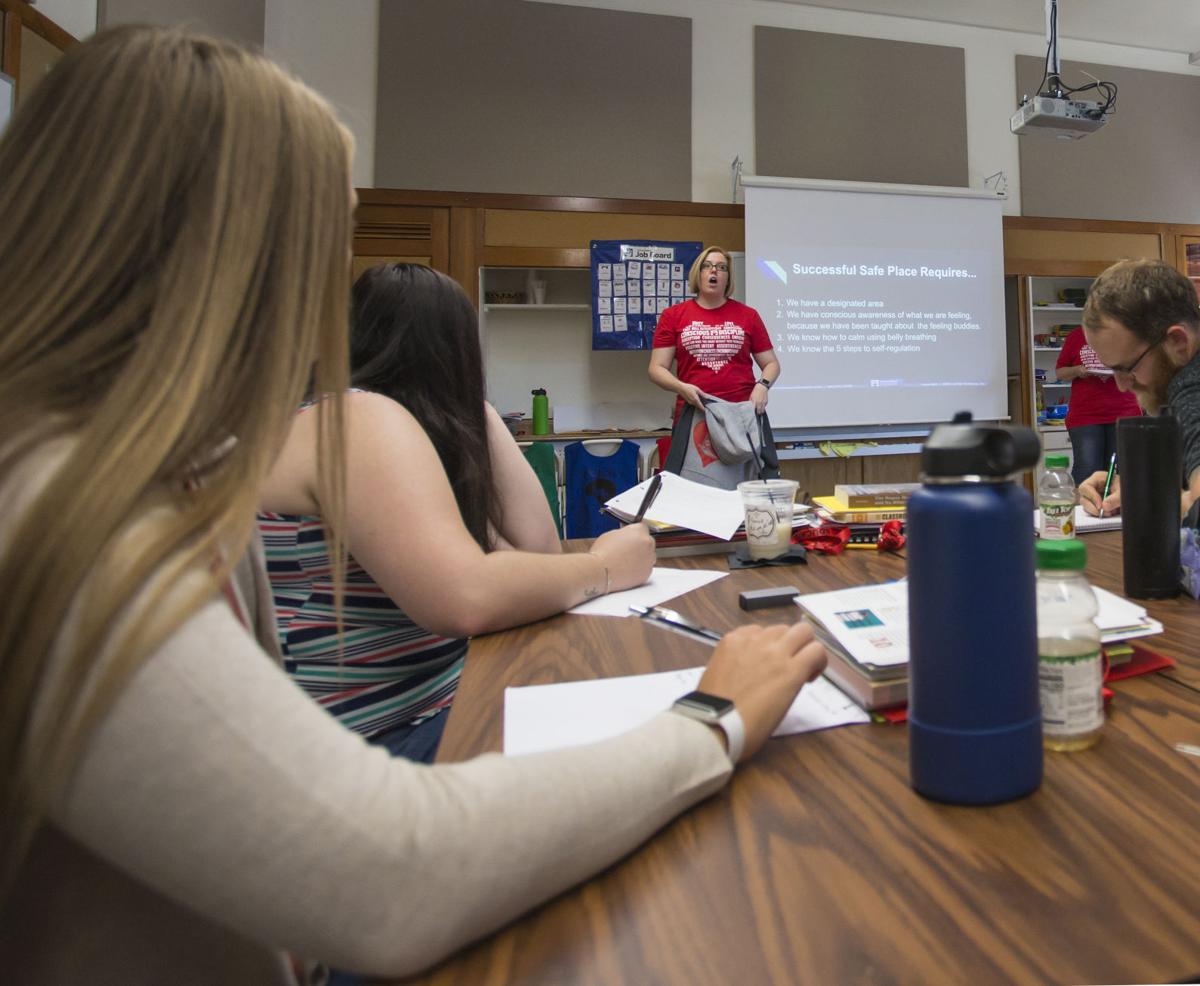 Jolene Hudson, a teacher with Pendleton School District, discusses safe places with a group of new teachers during a training on Tuesday. 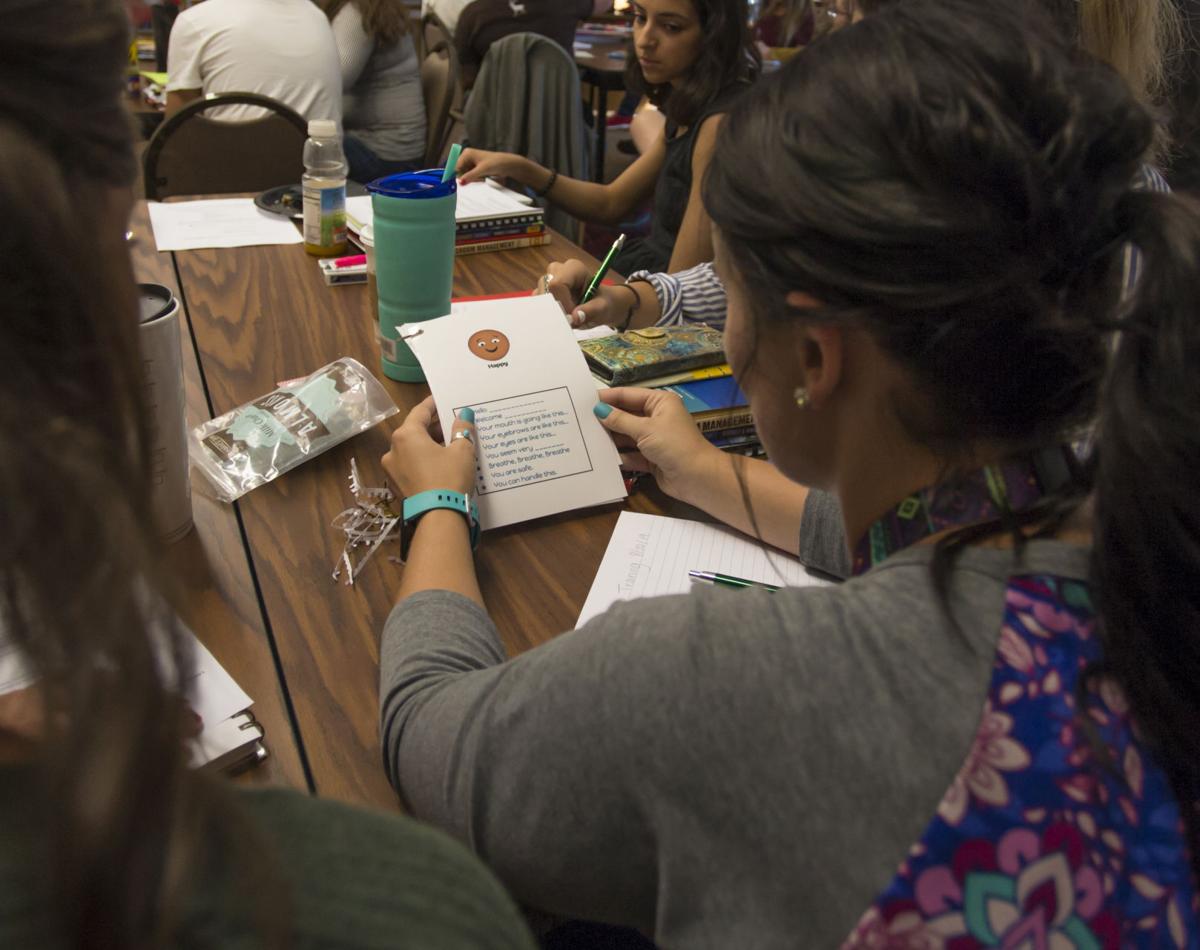 Makenna Ramos reads through a portion of the Conscious Discipline training during a new teacher orientation on Tuesday. Ramos will be a kindergarten teacher at the Pendleton Early Learning Center this year. 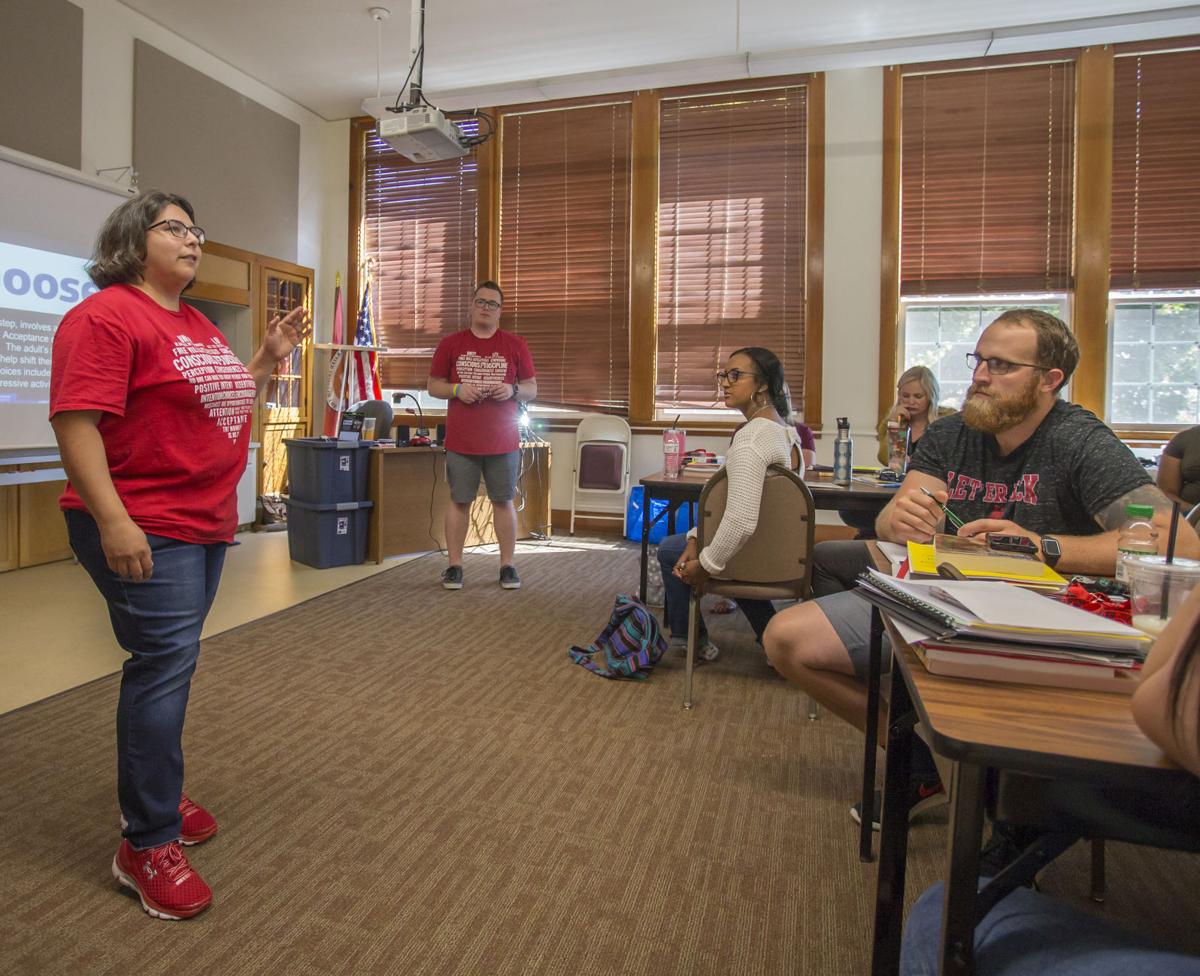 Maria Davis teaches a lesson during a new teacher orientation at the Pendleton School District offices on Tuesday. 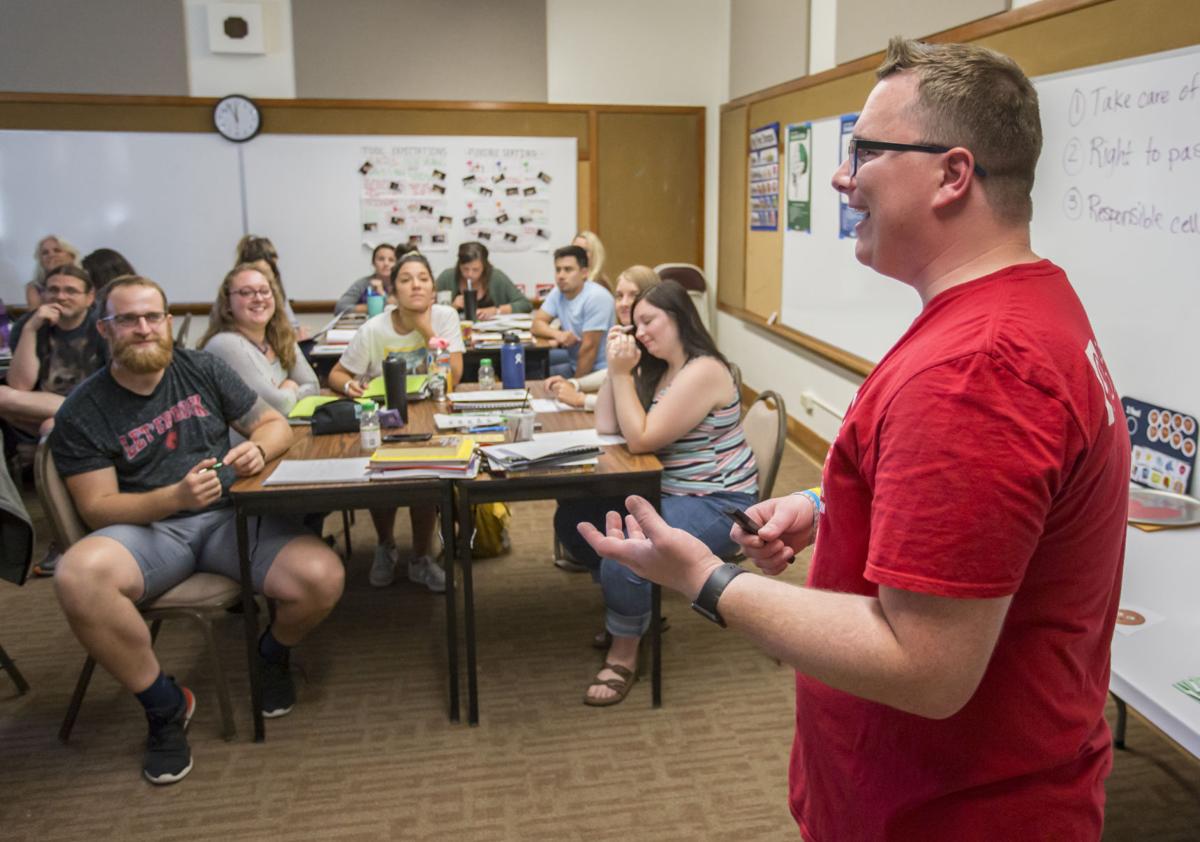 Josh McGraw, a kindergarten teacher at Pendleton Early Learning Center, teaches a lesson to the district’s new teachers during a new teacher orientation in August 2019.

Jolene Hudson, a teacher with Pendleton School District, discusses safe places with a group of new teachers during a training on Tuesday.

Makenna Ramos reads through a portion of the Conscious Discipline training during a new teacher orientation on Tuesday. Ramos will be a kindergarten teacher at the Pendleton Early Learning Center this year.

Maria Davis teaches a lesson during a new teacher orientation at the Pendleton School District offices on Tuesday.

Josh McGraw, a kindergarten teacher at Pendleton Early Learning Center, teaches a lesson to the district’s new teachers during a new teacher orientation in August 2019.

PENDLETON — For the second consecutive year, the Pendleton School District will welcome a significant number of new teachers to its classrooms for the first day of school on Tuesday.

In total, 27% of the district’s certified staff are in the “probationary” period, which means they’re in the first three years of working with the district.

On Monday, the new instructors gathered for an extensive two-day teacher orientation geared toward preparing them to hit the ground running.

“We’ve never done more,” the district’s Director of Curriculum, Instruction and Assessment Matt Yoshioka said of the program. “When I started in 2000, I was handed a key and told, ‘Good luck, the books are in the classroom.’”

The orientation program will be tested by this year’s group. Between the 21 new teachers, there are just 15 full-time years of experience in the classroom, with 17 beginning their first full-time position in teaching.

Many of the new hirees, Yoshioka said, have just finished their bachelor’s degrees and student teaching but are licensed to work in Oregon while enrolling in a master’s program.

While that means most are inexperienced, Yoshioka also sees a group that is fresh and excited to get to work.

“It’s awesome, it’s like, ‘This is it.’ All of a sudden they have a grown-up job,” he said, laughing. “(College) programs are preparing them better than they ever have before.”

Still, Monday and Tuesday were dedicated to getting the new teachers up to speed as fast as possible. Monday began with the hirees meeting Superintendent Chris Fritsch and the Pendleton Association of Teachers before focusing on professionalism training.

The group also took a trip out to Tamástslikt Cultural Institute at the Confederated Tribes of the Umatilla Indiana Reservation to learn about local tribal history and culture, which was then followed by a lunch with the school board.

Tuesday’s training started with a morning session on Conscious Discipline led by four teachers from the district. Josh McGraw, Maria Davis, Jolene Hudson and Betty Townsend taught lessons on how to handle emotional situations with students in a healthy and effective way.

“For Conscious Discipline, discipline is not a form of punishment,” Hudson said.

Yoshioka said the instruction helps teachers be more “self-aware” of themselves and the students.

This is the second year the district has presented the program to teachers, though McGraw said that he and others have been using the lessons it showcases for the last four years. The program is over two decades old and has become popular around Umatilla County, with classrooms implementing it around the world in Africa, Asia and Mexico too.

The session featured lessons on how to defuse emotional situations that arise between and within students in a way that students can learn how to acknowledge and address their own emotions.

Some of its important elements included creating a safe, age-appropriate space for students in the classroom where they can go to when they need to process emotions. These spaces include materials, such as plush toys with expressive faces to help the student identify what they are feeling, and items like sensory sequin pillows that relax them to help work through those emotions.

The point isn’t to be perfect or have children rely on these materials, McGraw said, but instead to make them available to students and reinforce the program’s values enough to make a difference.

“If we do this 20% of the time, students in our community are going to benefit,” McGraw said as he ended Tuesday’s lesson.

While the concepts of the program are designed to be implemented across all ages of students, much of Tuesday’s lesson focused on examples of students in elementary school and younger, which got Kiana Rickman and Bethany Van Cleave talking about how they could implement the same concepts in their classes this year.

Rickman was hired to teach history at Pendleton High School, while Van Cleave will be an eighth grade English/language arts teacher at Sunridge Middle School. Though both are in their first full-time teaching job out of college, both are familiar with the school district.

Before seeing each other for the orientation on Monday, Rickman and Van Cleave last met at PHS. Rickman graduated in 2015 before attending Nebraska-Wesleyan University where she joined the women’s soccer program, while Van Cleave graduated the following year and went to Eastern Oregon University. Neither had any idea they’d soon be working in the same district.

While the school district managed to bring two of its own products back, it’s also attracted others from around the Pacific Northwest.

Jennifer Wirth grew up in Brush Prairie, Washington, and will be teaching special education classes for second- and third-graders. She graduated from Eastern Washington University and said she was drawn to Pendleton by the community and the district’s educational philosophy.

Hali Fugere grew up in Timber before attending EOU and said she came to the district after her {span}fiance{/span} was hired in the city.

While the four first-time teachers sat together at lunch on Tuesday, all expressed more excitement than nerves ahead of next week’s first day of school and the challenges ahead of them.

In addition to the two-day training, the district also provides yearlong support for the new teachers. Each will receive a staff mentor who will be their liaison for questions, take them on observatory walks to other classes and observe them in their own classrooms. The district also holds monthly teacher workshops, and provides an instructional coach to assist with developing lesson plans along with offering other professional development opportunities.

While 21 new teachers in the district may present some challenges, Yoshioka is optimistic and committed to their long-term success, noting that all of last year’s hires were retained.