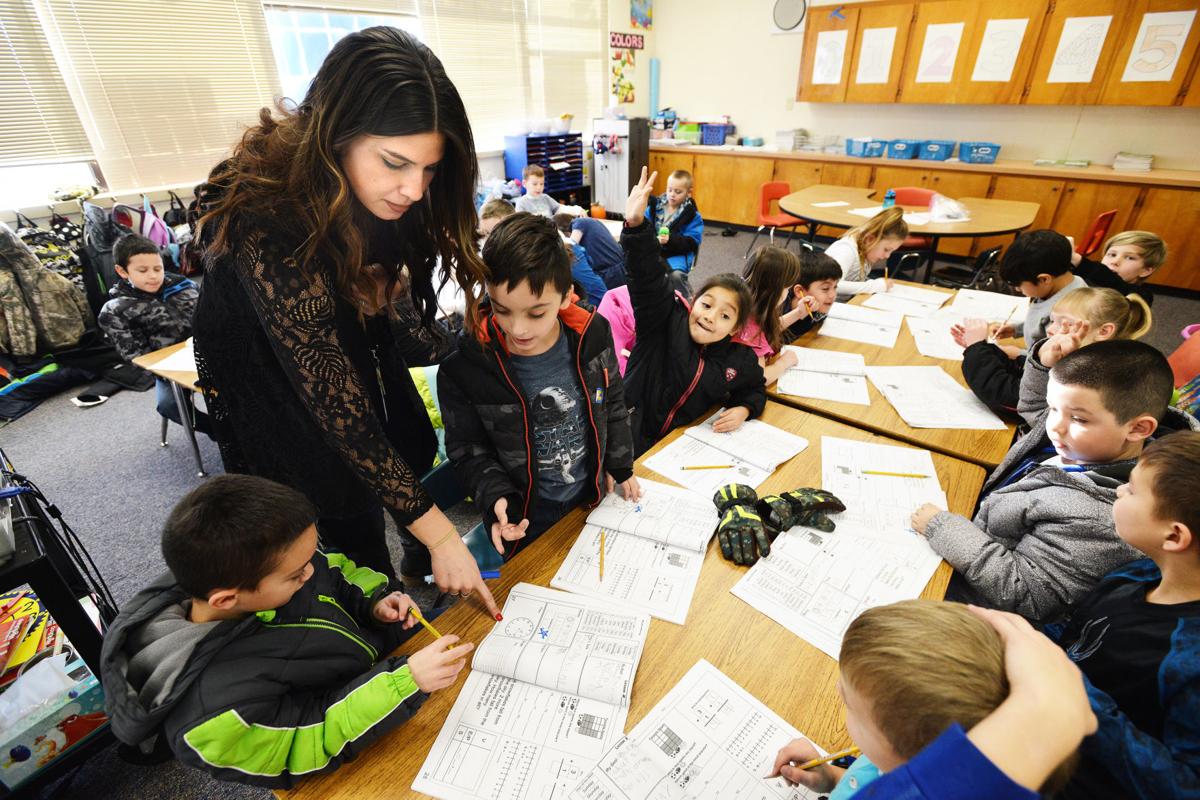 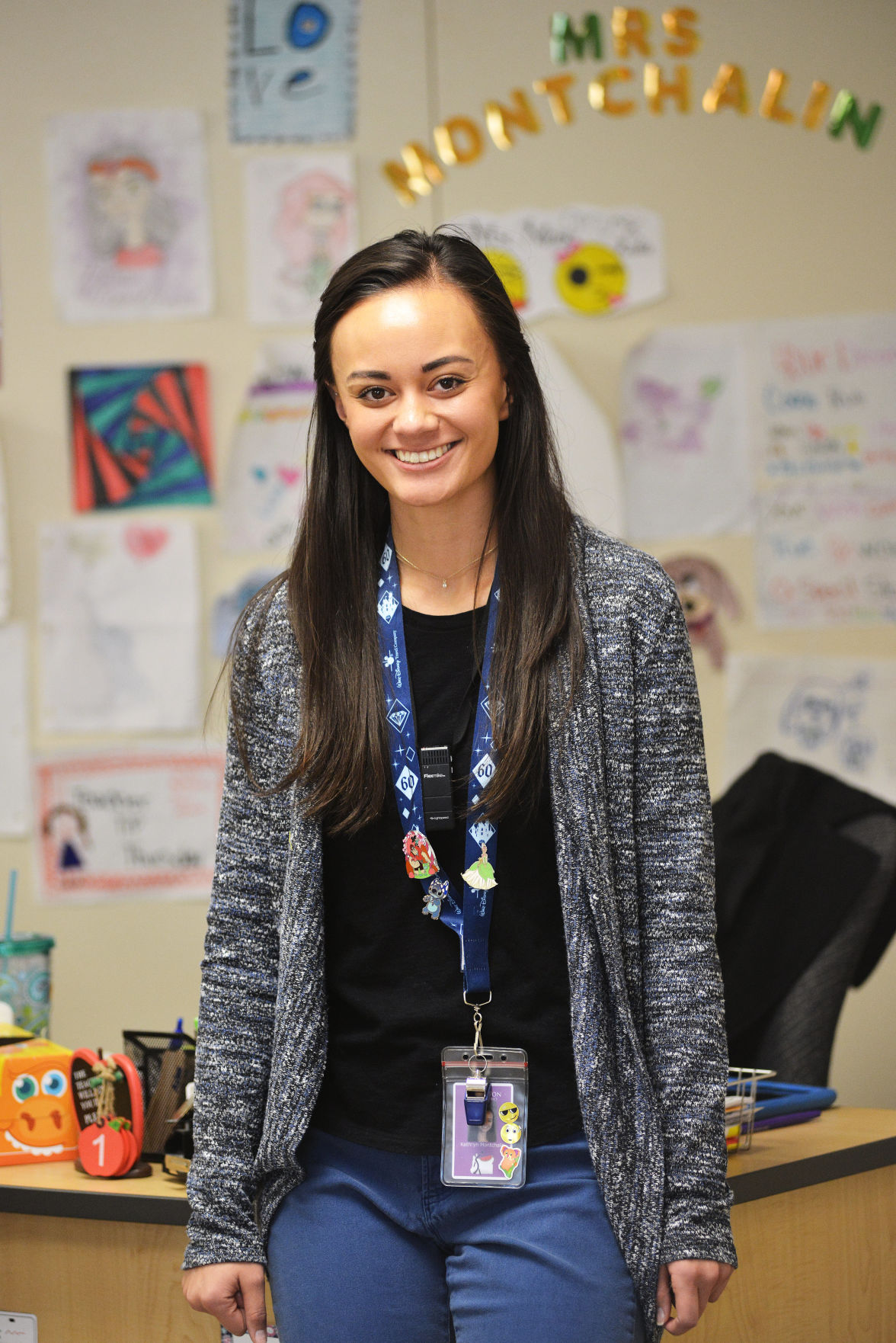 Katie Montchalin is in her first year teaching fifth-graders at Sunset Elementary School in Hermiston. 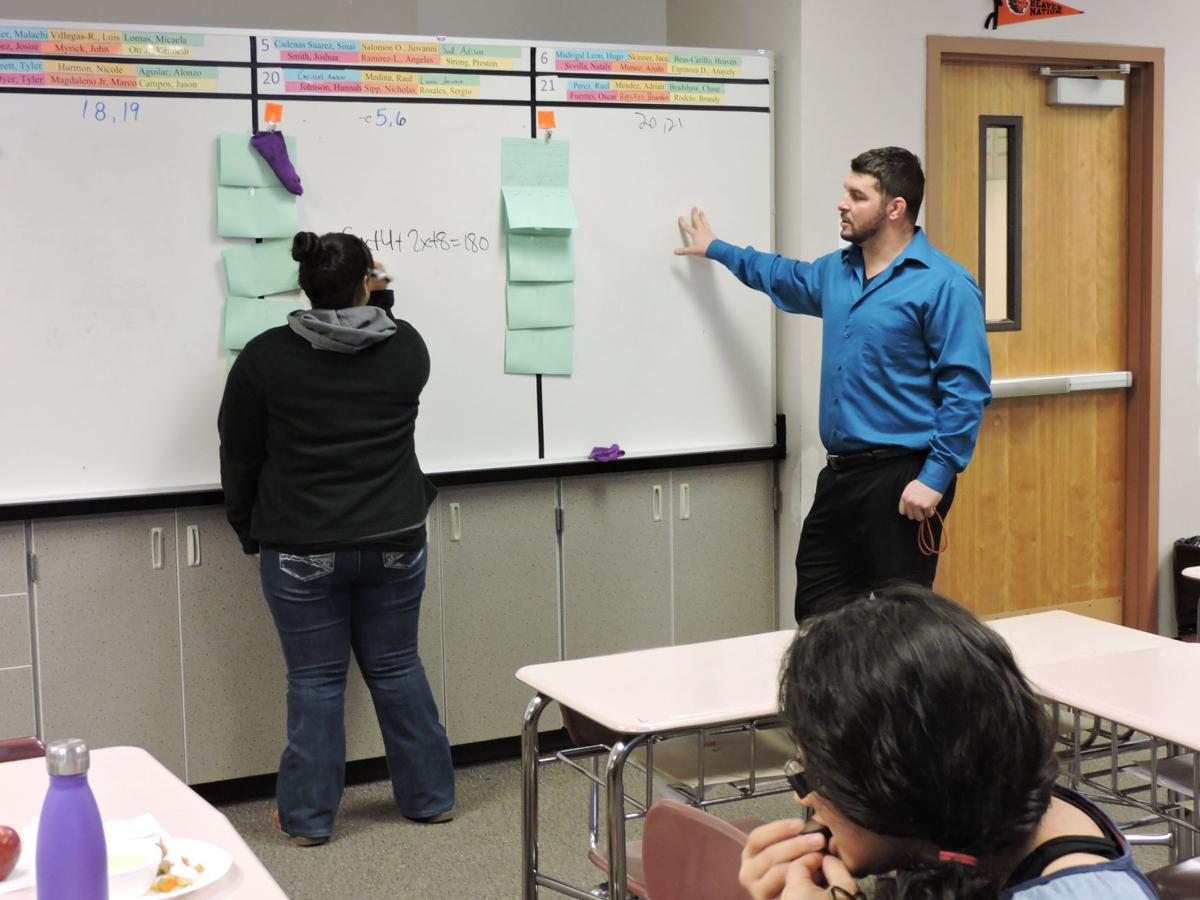 Andy Hall, a new math teacher at Hermiston High School, looks on as a student works out a problem.

Katie Montchalin is in her first year teaching fifth-graders at Sunset Elementary School in Hermiston.

Andy Hall, a new math teacher at Hermiston High School, looks on as a student works out a problem.

Hermiston School District has 51 new certified staff members this school year, in keeping with the steady growth the district has seen over the last few years.

The new additions to the district range from recent college graduates to experienced teachers, and there are new staff from out of town as well as locals — including Hermiston High School graduates coming back to the school to teach. There are 21 new teachers at the elementary school level, nine at the middle school level, 16 at the high school and 5 in the district office.

September 2016 enrollment was 5,651 students — a jump of 141 from the previous year, and in line with the district’s projections.

Here are three of the new teachers in the district:

Growing up in a family of educators, teaching was always a possibility for Katie Montchalin.

“It was always in the back of my mind,” said Montchalin, a new fifth grade teacher at Sunset Elementary School.

Though this is her first year teaching at Sunset, she has a unique connection to the school — her grandmother was a fifth-grade teacher at the same school for 20 years.

A Pendleton native, Montchalin recently spent two years as a substitute in her hometown before coming to the Hermiston School District.

“It’s been really good,” she said of her first year. “It’s been crazy.”

In getting used to the new rules and curriculum, Montchalin has found that much of her teaching job has been about learning — especially to manage the needs of 26 other people.

“You have to make sure each one of them is doing well,” she said. “Learning where you stand in relation to that — how much influence you have over them.”

She has enjoyed getting to know her students.

“Probably one of my favorite things is how much students can impact me positively,” she said. “If I’m ever down, they’re really quick to bring me back up.”

Montchalin said knowing students look up to her is another one of the job’s rewards.

“It makes me feel like I have a positive impact,” she said.

She has also enjoyed being able to work in Hermiston.

“It’s nice to be outside of my hometown and make my own name,” she said.

Madeline Laan is teaching her first-grade students about numbers — through coins, clocks and graphs.

“A quarter past one,” she calls out, as students look at the blank clock face on their worksheets, and draw on hands on to show 1:45. Laan goes around to each student with a blue marker in hand, helping and steering them in the right direction. In the same lesson, the students go over the value of each coin, and learn how to draw a bar graph.

Laan is in her first year as a teacher, and has enjoyed finding new ways to help her students learn.

“I love to hear kids’ thoughts,” she said. Her favorite thing to teach is writing — especially creative writing.

“They improve so much in writing in the first grade,” she said. “There’s so many activities you can do.”

Laan, a native of Middleton, Idaho, attended Eastern Oregon University before coming to Highland Hills Elementary. She has always wanted to be a teacher.

The new job can be overwhelming, but Laan praised the supportive coworkers and staff for helping her through the learning process.

Laan said one surprise was the amount of time teachers put in outside the classroom — something she finds herself wanting to do.

“It’s hard as a teacher to keep work from going home,” she said. “You carry it with you. I don’t have any children, but they’re like my kids.”

“It’s different every day,” she said. “They’re still learning all the rules, and they still need you — I love that. And their responses — they’re so funny!”

Andy Hall is no stranger to the halls of Hermiston High School, but this year, he’s seeing them from a new perspective.

The HHS graduate is a new math teacher at his alma mater, and is implementing some new teaching strategies he picked up from his prior experiences.

“I did all my schooling at Oregon State,” he said. “And I spent six years teaching in Denver.”

Hall recently came back to Hermiston and bought a house, and is glad to be back in his old stomping grounds. He is impressed with the students he’s encountered so far.

“The student energy and attitude is way higher than what I saw in Denver,” he said. “The instructional strategies I try here actually work.”

One of those strategies Hall has introduced is Math 360, an instructional concept where whiteboards are placed all around the room, and students are up and moving around to solve problems.

“It gets them up moving, and allows me to see the work being done,” Hall said. The district recently installed several whiteboards in Hall’s class, and is starting to do so in other rooms.

“This is the first class to have that done,” he said.

Hall has enjoyed collaborating with other teachers, and getting involved with the school outside of class — he’s a coach for the football and wrestling teams.

As a new teacher at the school, Hall says the biggest challenge is balancing time in the classroom with other requirements.

“The district does a lot of professional development for new teachers, which is good,” he said. “It’s an opportunity to share ideas and pick up new ideas. But we’re out of the classroom for a lot of training, so some of the challenges we face as new teachers are not being able to spend as much time as we’d like with students.”

He added that as a coach, his work with athletes after school can limit the number of hours he has to support students outside of class.

Hall is excited to be teaching at Hermiston High School.

“I hope to be here for a long time,” he said. “Maybe one day work my way up to administration and make changes that way.”