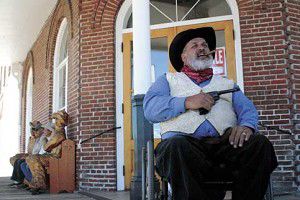 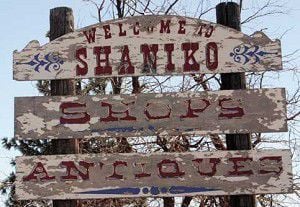 Shaniko once boasted a population of 600 during its glory days, distinguishing itself as the "Wool Capital of the World" in the early 1900s. About 30 people now live in the tiny Central Oregon town.<br> Staff photo by Kathy Aney

Shaniko once boasted a population of 600 during its glory days, distinguishing itself as the "Wool Capital of the World" in the early 1900s. About 30 people now live in the tiny Central Oregon town.<br> Staff photo by Kathy Aney

The tiny town of Shaniko appears, at first glance, as a ghost town in the making - some say it's already arrived.

Only 34 people call the desert town home and the historic Shaniko Hotel has had a "For Sale" sign taped to its stylish front door, since its owner, tycoon Robert Pamplin Jr., pulled up stakes and left town earlier this year. The gas station closed last fall.

Appearances, however, aren't everything.

Shaniko dwellers tend to mix rugged individualism with laid-back humor and pride in both their history and their self-sufficiency. While city dwellers may look at Shaniko's desertscape and lack of malls, movie theaters and ethnic restaurants and see a life of endless boredom, Shaniko residents embrace their little berg as an oasis under the stars, a place far from urban noise, pollution and crime.

Dan Hendrix, the town's fire chief, possesses a huge dose of hardy Shaniko spirit. Hendrix is an aircraft mechanic and pilot who navigates through life in a wheelchair, when he's not flying a plane. The burly fire chief crashed during a Miller High Life desert car race. His car covered 500 yards, bouncing three times, breaking Hendrix's back and leaving him paralyzed from the waist down.

Hendrix, who wielded a six-shooter at a Main Street shoot-out during the recent Shaniko Days, oversees three brush rigs and two engines that go out quite regularly, giving mutual aid to other towns.

"We're the most dysfunctional department on the planet," he joked, "but we get the fire put out."

Byron Jacobis, the owner of a Vancouver bottled-water company called Water & Air Works, commutes to his job from Shaniko each Monday and returns on Thursday.

"Every day in Shaniko is the greatest day," he said. "When the stars shine at night, you can look out for hundreds and hundreds of miles - people in the valley don't get it."

Jacobis also loves the history of the place. Shaniko, now a scattering of buildings at a lonely bend in Highway 97, boasts a rich, boom and bust past. The city boasted a population of 600 at the height of Shaniko's glory days, a time when it was known as the "Wool Capital of the World," the center of 20,000 square miles of wool, wheat, sheep and cattle production. Columbia Southern Railroad ran tracks from Biggs Junction to Shaniko where the town's huge wool warehouse handled 4 million pounds of the product in one year and shipped them out.

But boom soon turned to bust.

According to Town Historian Debbie Holbrook, 1911 was a dreadful year for Shaniko.

"That was the year of terrible tragedy," Holbrook said. "The mayor was shot, the railroad reached Bend from another direction and a major portion of the business district burned to the ground."

The mayor, J.C. Fowlie, met his end one day in October, shot to death by his friend Del Howell,

"Together, they'd been Shaniko's founding fabric for years," Holcomb said.

Howell, however, had visited many of the town's seven saloons. In his drunken state, he confronted Fowlie about some business dealings.

"They met on the boardwalk," Holcomb said. "Del pulled a gun and shot the mayor in the stomach."

To compound the loss of Shaniko's mayor, the railroad made it to Bend, instantly devaluing the Biggs-to-Shaniko spur. To make matters worse, the bulk of the town's business district burned to the ground in a fire.

Robert Pamplin Jr., an Oregon media mogul and philanthropist, bought up much of Shaniko about a decade ago, including the century-old hotel, the historic wool barn, an RV park, some downtown shops and a couple dozen buildable lots and poured hundreds of thousands of dollars into restoring and preserving the town's history.

The tycoon drew some fire when he tore down a historic grain elevator, but his relationship with residents was mostly amicable until a water rights issue split the town. Pamplin drilled a well on one of his out-of-town properties, hitting an aquifer that provided 250 gallons per minute. He asked the city for an easement to supply his hotel, offering the city a 50-year lease on his well with assurance that his corporation's demands take precedence.

"The state says you can't have your own water source within city limits," said Hugh Holbrook, who works on a cattle ranch and is city council president. "We explained to him we are a viable city and we have to follow the rules."

The dispute ended with Pamplin putting all of his properties up for sale for $3.1 million and then left town.

Shortly after Pamplin's exodus, an upside down American flag appeared on the flag pole high atop the town's old courthouse. The flag, hung sometime in the wee hours, stayed there several hours after the sun rose until someone could find an extension ladder and tear it down.

Holbrook said he doesn't know who hung the flag, but didn't think it was meant in disrespect.

"An upside down flag is also a sign of distress," he said. "As in, Bob Pamplin is gone and we've lost his money."

The councilor president shook his head.

"He didn't like being told 'no,' " Holcomb said. "But this town's been around since 1900 and it's going to survive without him."