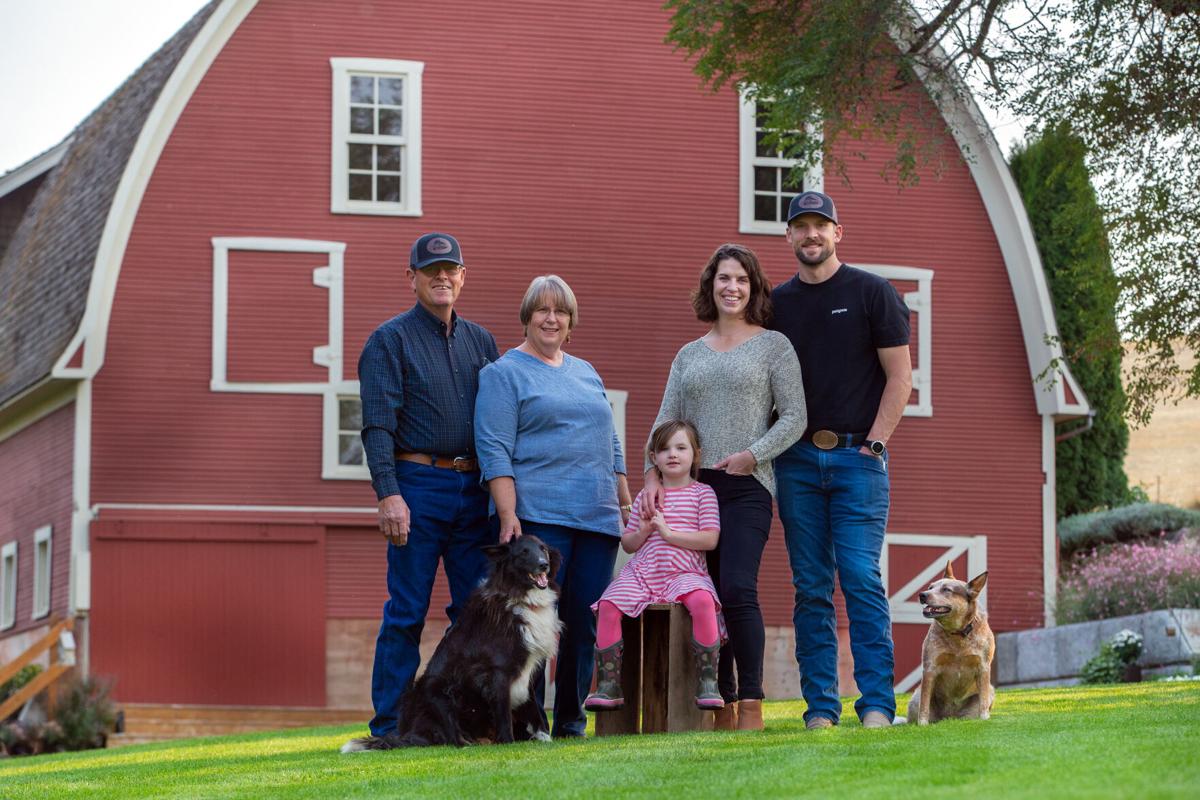 Preston and Arlene Winn, Waverly Seymour and Kendra and Tim Seymour pose on the lawn in front of their 104-year-old Gothic arch barn near Weston on Oct. 1, 2020. 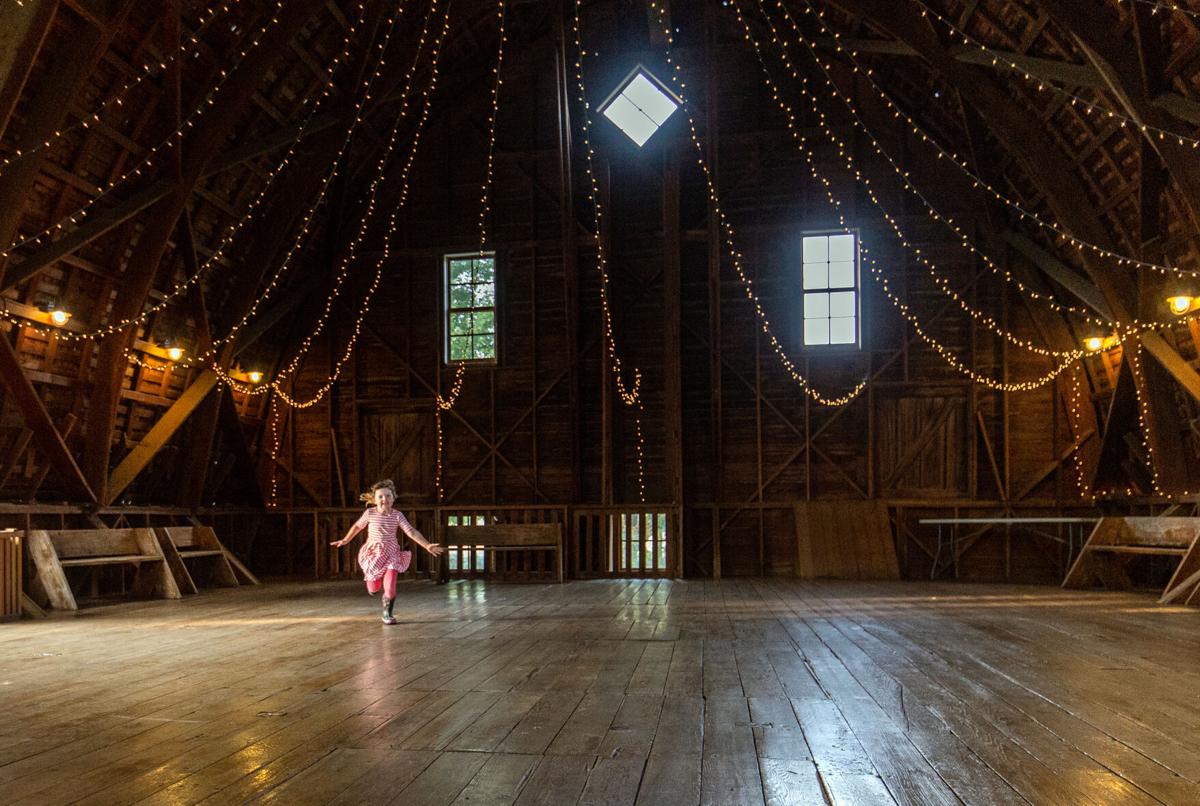 Waverly Seymour plays in her family’s 104-year-old gothic arch barn on Oct. 1, 2020. The vintage barn is being used as a wedding venue. 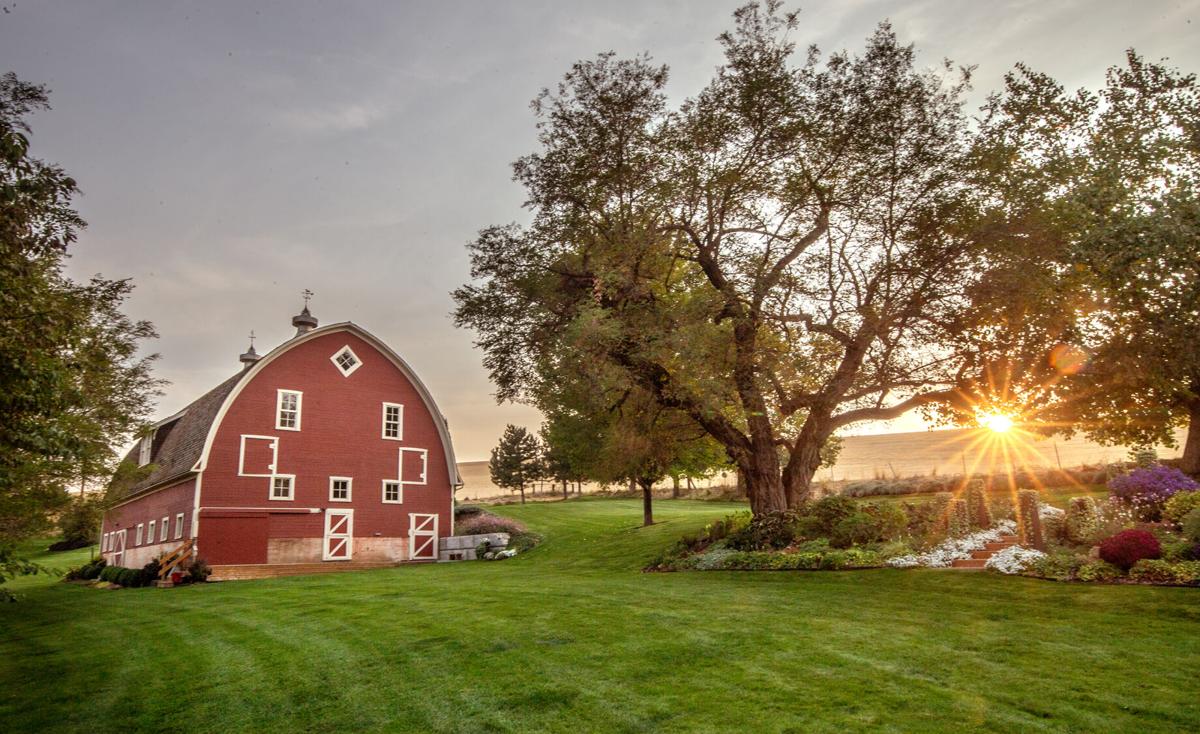 The Winn barn, in the gothic arch design, was built in 1916. George W. Winn spent two years assembling supplies in preparation of the building’s construction. 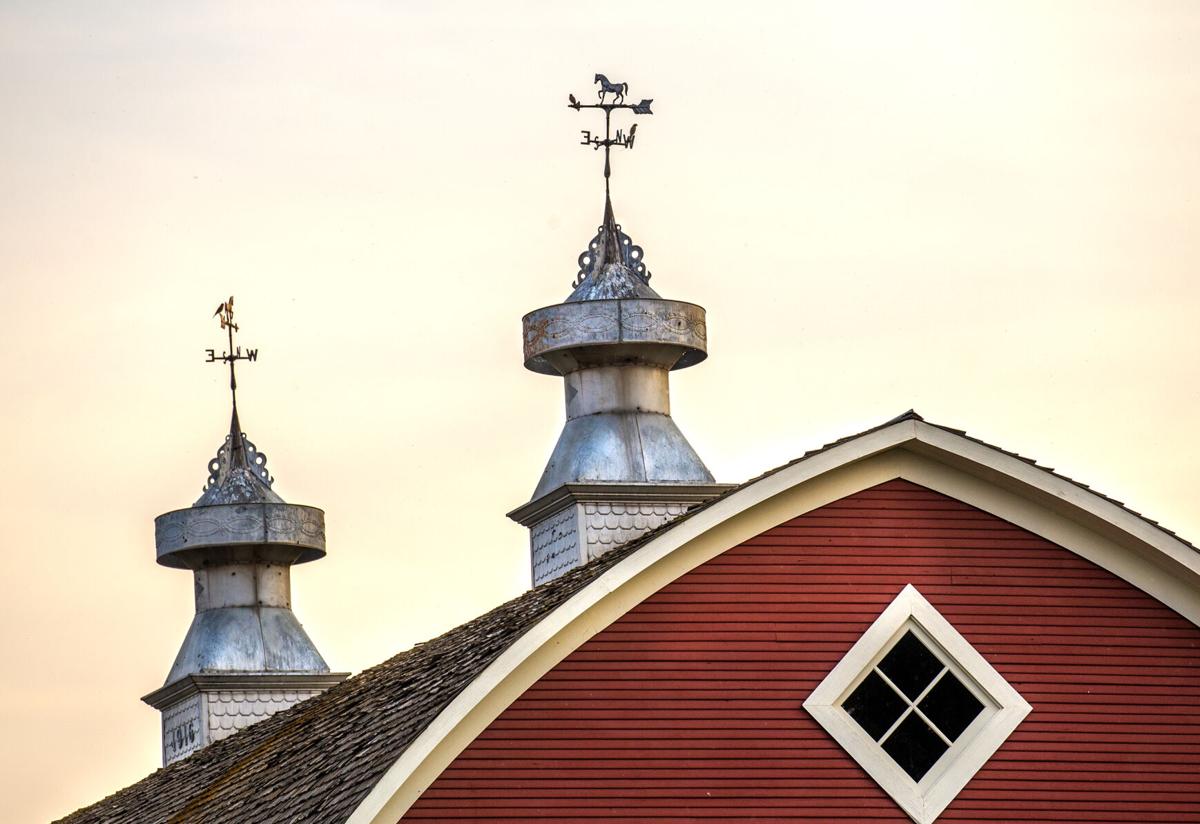 Two vintage ventilators protrude from the roof of the Winn barn. 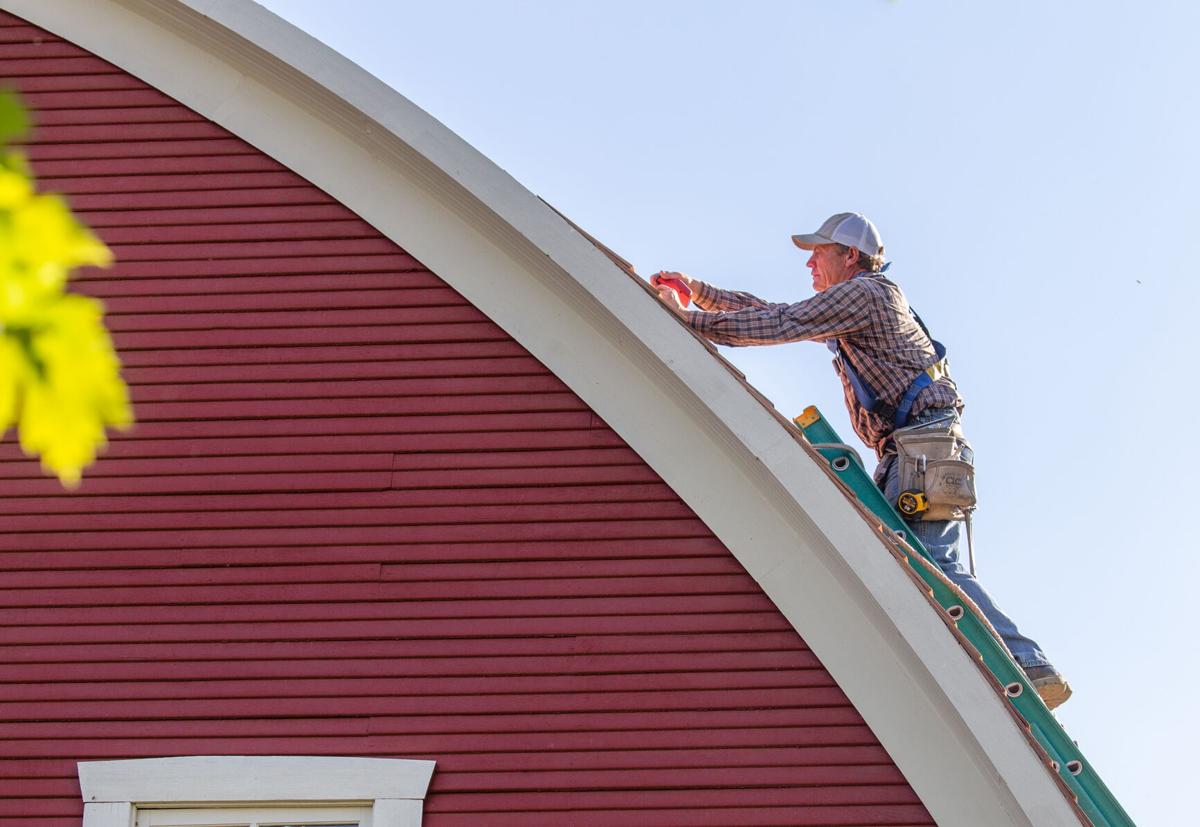 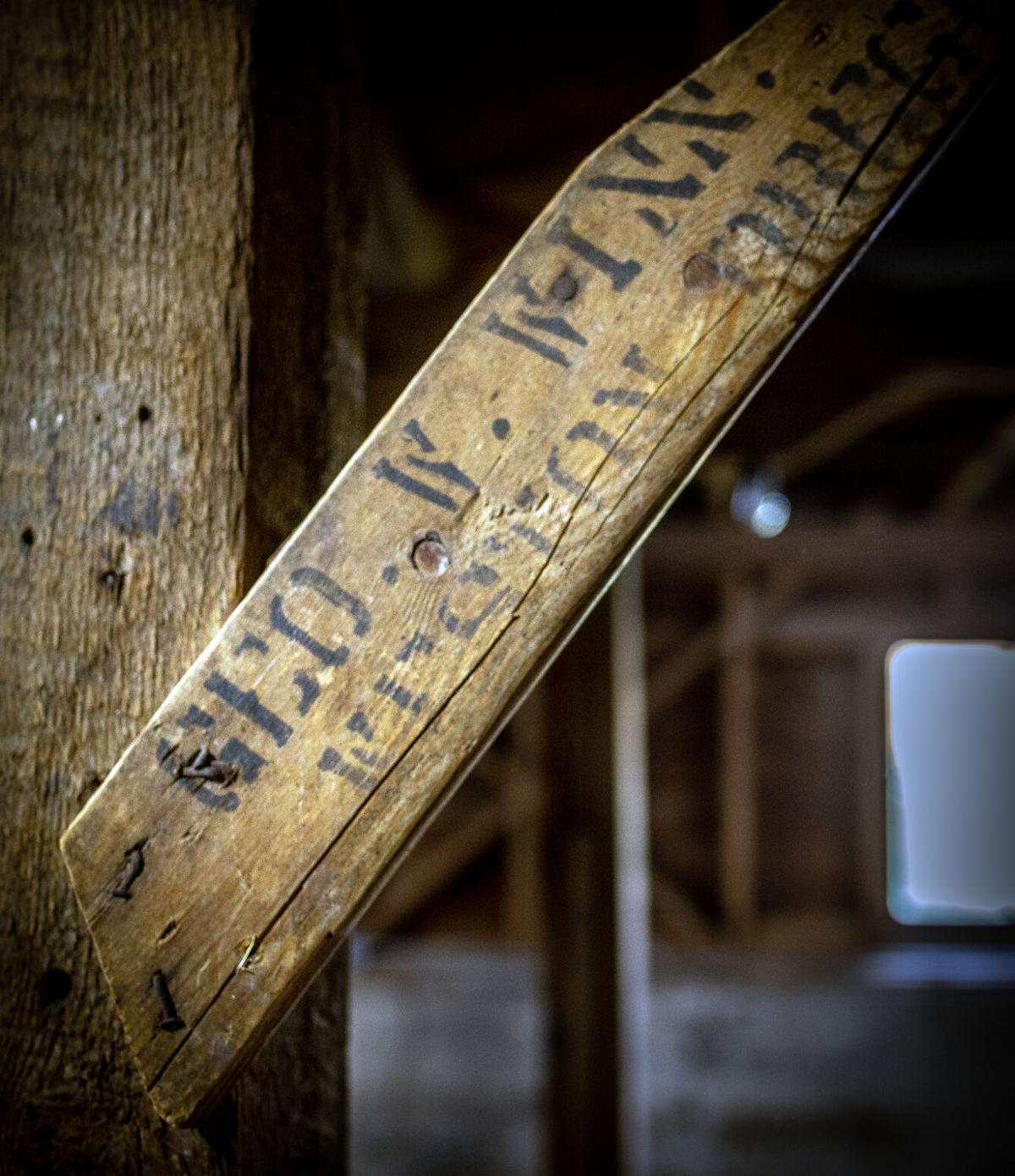 A cross brace in the lower level of the Winn barn bears the name of “GEO. W. WINN, WESTON, OREGON.”

Preston and Arlene Winn, Waverly Seymour and Kendra and Tim Seymour pose on the lawn in front of their 104-year-old Gothic arch barn near Weston on Oct. 1, 2020.

Waverly Seymour plays in her family’s 104-year-old gothic arch barn on Oct. 1, 2020. The vintage barn is being used as a wedding venue.

The Winn barn, in the gothic arch design, was built in 1916. George W. Winn spent two years assembling supplies in preparation of the building’s construction.

Two vintage ventilators protrude from the roof of the Winn barn.

A cross brace in the lower level of the Winn barn bears the name of “GEO. W. WINN, WESTON, OREGON.”

Inside are echoes of past life, easily accessible to the imagination. The nickering of draft horses and mooing of dairy cows. The hollow thunk of milk hitting bucket. Lingering aromas of manure and freshly mown hay.

The Winn barn in Weston so far has escaped the fate of thousands of barns decaying in fields across America. Maintaining such a barn against the relentless forces of nature is costly. Preston and Arlene Winn justified the expense by converting the barn into a wedding venue business in 2008, using most of the revenue to pay for maintenance.

Recently, the couple began passing ownership of the business to daughter Kendra Seymour and her husband, Tim. The energetic duo will shepherd the homestead into the next chapter of its long history.

Kendra’s great-grandfather, George W. Winn, erected the structure 104 years ago after spending two years assembling supplies. Wood and cement arrived by rail from the Willamette Valley. In 1916, Winn and his neighbors raised the barn.

The voluminous barn features a hay loft, shiplap floors and an arched roof. Its Gothic arch style is rare in the West, though common in England. The barn is built into a hillside so one could once drive a wagon into the loft to unload loose hay or grain into a chute for the livestock below. A dam on nearby Dry Creek generated electricity for the barn.

As years passed, the family’s relationship with the barn changed. In early decades, dairy cows and draft horses inhabited the place. Milk was transported to a creamery in Walla Walla. Wheat harvested from surrounding fields went into a grain bin in the center of the hayloft and flowed down via gravity. As farming technology improved and tractors replaced horses, the barn wasn’t needed as much. Sometime during the Depression, the family sold the dairy cows.

Preston remembers working in the barn as a boy. In later years, the barn provided a haven for his children. Daughter Kendra, a four-sport athlete at Weston-McEwen High School, practiced her basketball moves in the barn. She and brothers Ben and Daniel played half court games, the ball thudding on the shiplap floor. The siblings raised 4-H animals there too.

As the barn aged, the family looked for a way to preserve it. Arlene pressed her husband to consider removing the old hay chute and repurposing the barn into a wedding venue. The move would provide funds to maintain the building.

“It took her years to convince me to take out wood my grandfather had put there,” he said. “It was a hard sell.”

Preston winced as he thought back, but said the wisdom of his wife’s advice finally soaked in. Removing the old chute, he realized, was much like cutting off a man’s gangrenous finger to save his life. They removed the chute and refurbished the space with a glossy, tongue-and-groove floor. The wedding venue opened in 2008. Until the pandemic, about 25 couples each wedding season have started their married lives in the barn.

Last year, Preston retired from teaching agriculture at Blue Mountain Community College after 28 years at the institution. Arlene, a former teacher and mortgage loan processor, continues to function as Winn Homestead’s master landscaper and bookkeeper after handing off the client relationship management and marketing duties to her daughter.

Kendra embraces her new role, while marveling at her circular journey. She had happily departed Weston after graduating high school in 2003, not expecting to live full-time in the area again. She earned a bachelor’s degree in international relations and studied in Latin America, married Tim, then headed to Washington, D.C., to begin her dream job. For several years, she shepherded members of Congress and White House staffers on foreign policy trips to Latin America. Tim worked as an IT consultant on the Hill.

Five years ago, the couple moved to Portland where Tim continued his job remotely. Waverly, now 4, arrived. Kendra did research, writing and marketing for Stillwater Associates, a transportation fuels consulting firm, and ran her own photography business, Kendra Joy Photography, both of which she continues.

Then came an unexpected proposition from Preston and Arlene. They wanted to retire over time and transfer ownership in the wedding business (called the Winn Homestead Events) and the family farm to the next generation.

“Often in agriculture, the older generation is not willing to turn loose assets until late in life, oftentimes not until their 80s,” Preston said. “The younger generation doesn’t have the opportunity to shape those assets into whatever their vision is. Arlene and I see that as kind of a tragedy.”

After careful consideration, Kendra and Tim bought in.

“It all came together rather quickly,” Kendra said. “We sold our house and moved just in time for the pandemic.”

Then Tim was laid off from his IT job. Bookings dropped to just nine as couples cancelled and postponed because of the virus. The couple, along with Preston and Arlene, channeled their energies into continuing to renovate a 408-square-foot house where George R. Winn and his wife Imogene Sloan Winn honeymooned and later raised Preston and his two older siblings, turning the small home into a bridal cottage. They also updated a tiny bunkhouse on the property to a groom and groomsmen ready room.

The magnum opus is a new cedar roof for the barn. Helix wheat farmer and roofer Matt Wood and members of his crew (which include Preston and Tim) donned roofing harnesses last Monday and started removing the barn’s aging tamarack (western larch) shingles. Wood, an aficionado of old barns like this one, said he feels a sense of reverence when he looks at the structure.

“It’s an agrarian cathedral,” Wood said. ““Barns, to me, are more than old buildings. It’s nice to see someone committed to keeping a barn alive and functional, even if it means repurposing.”

Wood said he feels honored to work on the barn, which landed on the National Historic Register in 2011.

Kendra, now 35, said her appreciation of the historic barn has increased since childhood.

“As a kid, I didn’t see the value of the history,” she said. “My perspective has changed a little bit. I now see how cool the history is. It’s tangible; you can walk where your ancestors walked. There are a lot of stories in those walls.”