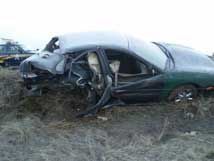 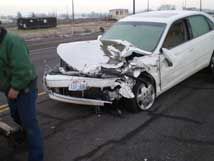 A late Monday night crash north of Milton-Freewater injured three people, one critically, and led to the arrest of a Kent, Wash., driver for driving under the influence of intoxicants and assault.

One of the drivers involved in the two-car wreck fled on foot and is still being sought.

Preliminary investigation indicates a 1998 Ford Taurus with three occupants was struck in the rear by a 2003 Toyota driven by Tyrone Kinzer, 43, of Kent.

After the crash, the driver of the Ford fled on foot, leaving behind two injured passengers. Alma Taya, 23, was critically injured and flown by air ambulance to Oregon Health Sciences University. A second passenger, Jane Ibarra, 43, suffered minor injuries and refused medical treatment. Their hometowns were not available.

Kinzer was taken to St. Mary's Hospital in Walla Walla for treatment. After he was released, he was taken into arrested and jailed in Walla Walla County Jail for DUII and second-degree assault.

Investigation of the wreck is continuing and no information was available to determine if those involved in the wreck were wearing seat belts.

Anyone with information regarding the location of the driver who fled the accident should call OSP Pendleton Area Command office at (541) 278-4090.