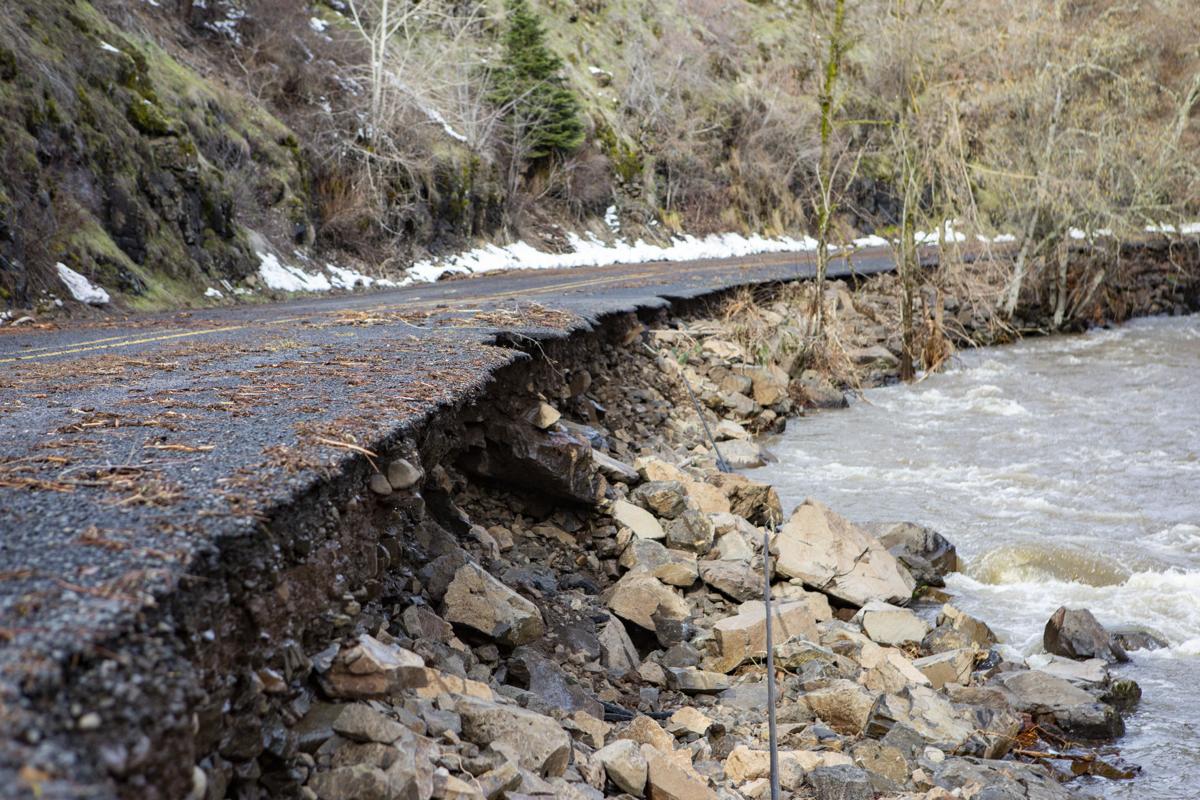 Rock that once made up the bank of the Umatilla River eroded, leaving the road surface along Bingham Road in rural Umatilla County dangerously damaged in early February 2020. 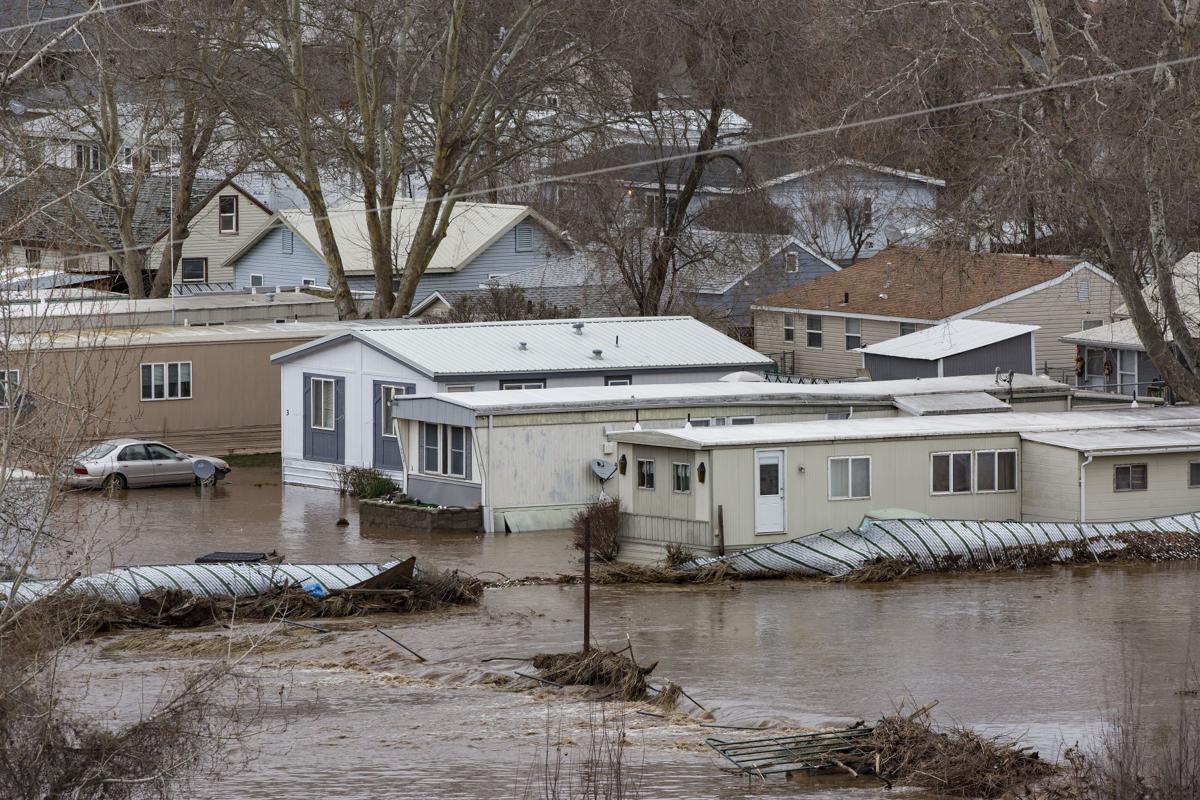 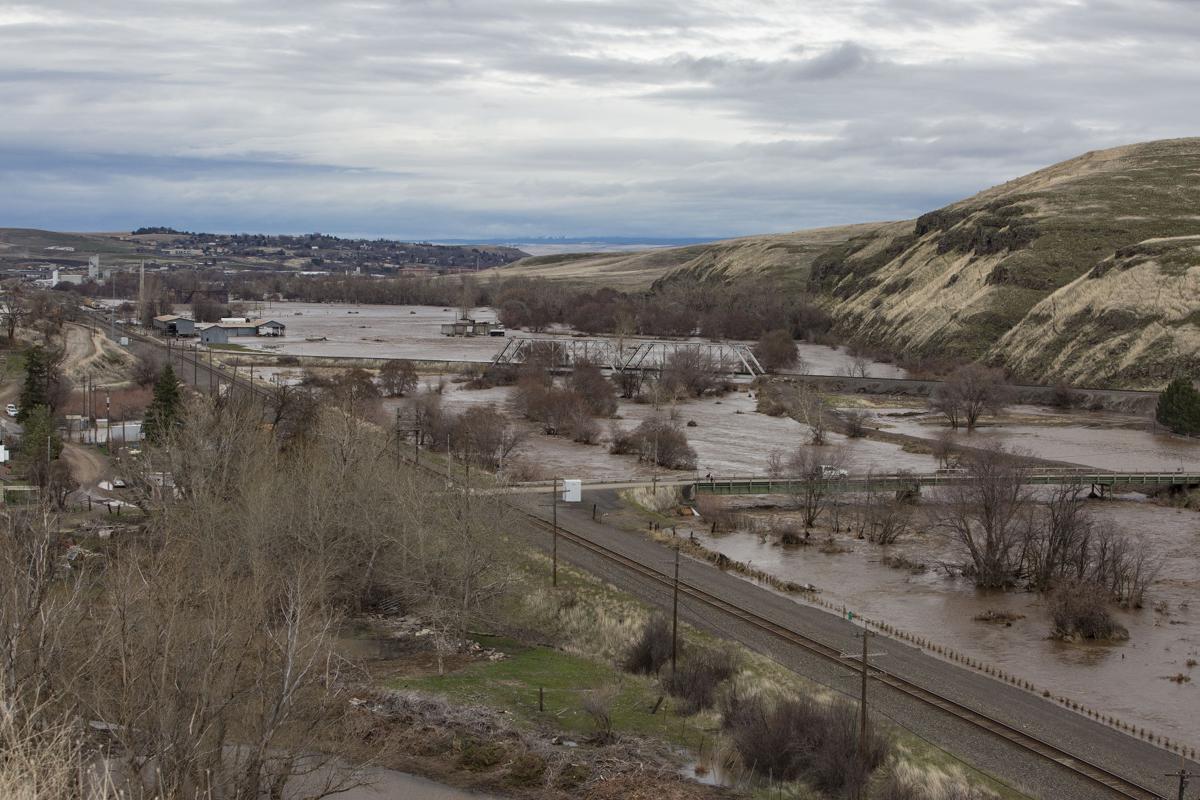 Water from the Umatilla River floods out over a large portion of the lowlands near Rieth on Feb. 7, 2020.

Rock that once made up the bank of the Umatilla River eroded, leaving the road surface along Bingham Road in rural Umatilla County dangerously damaged in early February 2020.

Water from the Umatilla River floods out over a large portion of the lowlands near Rieth on Feb. 7, 2020.

PENDLETON — The rains came rapidly, covering high points across the Blue Mountains with more than 20 inches of new snow.

The aftermath showed hundreds of homes destroyed, thousands of people evacuated and total damages over $48 million. One life was lost.

It was the second consecutive year of high waters, but its devastation was unparalleled in recent years. For many, there came a daunting question — could it happen again?

A robust and growing body of research has many scientists convinced that climate change is contributing to more frequent and severe flooding — the most common weather-related disaster threat in the United States. And with planet-heating emissions continuing to rise, extreme weather events and related losses are likely to continue, unless efforts are made quickly to curb emissions and adapt.

New modeling from Oregon State University indicates that flooding will become more severe throughout the Columbia River Basin over the next 50 years due to climate change. In some areas, the flooding season will expand, according to the research, which was published in the Journal of Hydrology and Earth System Science in January.

“The flood you’re used to seeing out your window once every 10 years will likely be larger than it has been in the past,” said Laura Queen, a research assistant at OSU’s Oregon Climate Change Research Institute and the study’s lead author.

Conducted over two years at nearly 400 sites throughout the Columbia River Basin and Western Washington, including at McNary Dam near Umatilla, the study is one of the most comprehensive of its kind, researchers said. Nearly every site showed increases in flood magnitude — the term used to describe flooding severity.

“This was surprising because it differed from past results,” Queen said, comparing the OSU study to others. “Some (studies) experienced an increase in flood magnitude, others a decrease. But we found” a ubiquitous increase.

Rising temperatures are a major factor driving this increase. With temperatures rising in the winter months, precipitation will likely fall as rain, rather than snow. This could cause mountain snowpack levels to dwindle and melt faster and earlier in the season. The change places ecosystems that rely on steady streamflow, and people living alongside waterways, at risk, researchers said.

Marilyn Lohman, a hydrologist for the National Weather Service Office in Pendleton, said earlier snowmelt can lead to drought in the summer months.

“When (precipitation) does come in these larger storms and produces flooding, it’s not as usable as when we would see it spread out through the entire season,” Lohmann said. “Looking further out, it does seem that our summers over the past five years have been drier than normal.”

In January, snowpack levels in Oregon’s mountain ranges were all below the annual average, according to USDA Natural Resource Conservation District Snotel sites that track snowfall and snow water. Average temperatures in January were also 4½ degrees above normal, according to preliminary data from the National Oceanic and Atmospheric Administration’s National Weather Service Office in Pendleton.

“It seems that more often than not when we look back over the months, we’ve seen that temperatures have been warmer than normal,” Lohman said.

Preparing for an uncertain future

The Oregon State researchers used data from 1950-99 to simulate streamflow from 2050 to 2099. Though the simulations did not factor in flood mitigation efforts, like the basin’s dams, the results suggest that existing strategies will not be enough as the climate continues to shift, according to Philip Mote, a professor in the College of Earth, Ocean, and Atmospheric Sciences and dean of the graduate school at OSU.

“We don’t know how much of this increased flood risk can be managed through mitigation measures until we study the issue further,” he said. “But managing a 30% to 40% increase, as is predicted for many areas, is clearly beyond our management capabilities.”

Flooding events driven by climate change are already proving costly nationwide. Research published by Stanford University in January shows that, over the past three decades, climate change has increased the cost of flood damage in the United States by $75 billion. That’s about a third of the country’s total flood costs from heavy rainfall between 1988 and 2017, according to the research.

“The cost of solar has fallen by a factor of 10 in the last 10 years. The cost of wind is down 70%,” Mote said. “So we’re seeing a massive market-driven move away from fossil fuels. So it’s getting harder to imagine a really high-emissions world.”

Floods in the Pacific Northwest are nothing new, the OSU study noted. In 1948, late-spring flooding of the Columbia River destroyed the entire city of Vanport and displaced more than 18,500 people. And in 1996 and 2019, flooding of the Willamette River caused hundreds of millions of dollars in damage.

Since the 1960s, Umatilla County has experienced several significant flooding events, though none were nearly as large as the 2020 flood, according to graphs from county hydrologists.

“We’ve had droughts and we’ve had floods in the past,” said Kate Ely, a Umatilla Basin hydrologist for the Confederated Tribes of the Umatilla Indian Reservation. “And we are anticipating longer and harder droughts, and higher, more intense and frequent floods. What do we need? We need leadership and we need planning.”

Adaptation will be essential in the face of climate change, Ely said, but she’s concerned that current efforts will likely not be enough.

“I worry that more levees will be built to fight a losing battle against a river doing its work naturally to drain the watershed,” Ely said. “Time and time again people try to control a river with engineering methods knowing the river will eventually win and society will pay the cost.”

Under normal conditions, flooding is a natural phenomenon. By carving pools, creating side channels, redistributing sediment and large wood debris on the banks and channel bars, floods can create complex and healthy habitats for fish, aquatic life, plants, birds and deer, Ely said.

“It will ultimately manage itself,” Ely said of the Umatilla River. “But how long will it take before people realize that rivers are self-made and self-maintained?”

Ely said community leaders can still show resilience in the face of climate change by dedicating long-term planning and resources toward working with the river, rather than against it. Restoring watersheds and using floodplains will be key to mitigate the severity of floods and droughts in the future, she said.

One year later: Digging out after disaster