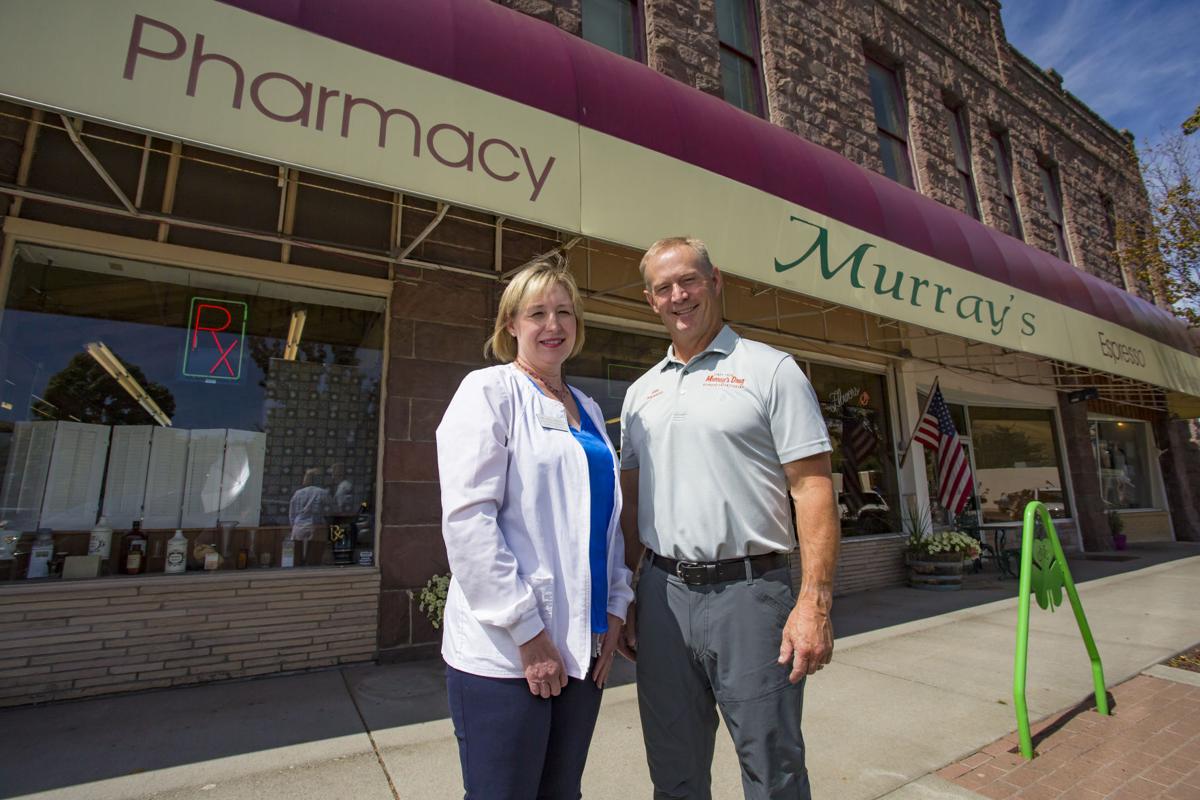 Ann and John Murray pose in front of the Heppner location of Murray’s Drug Friday afternoon. 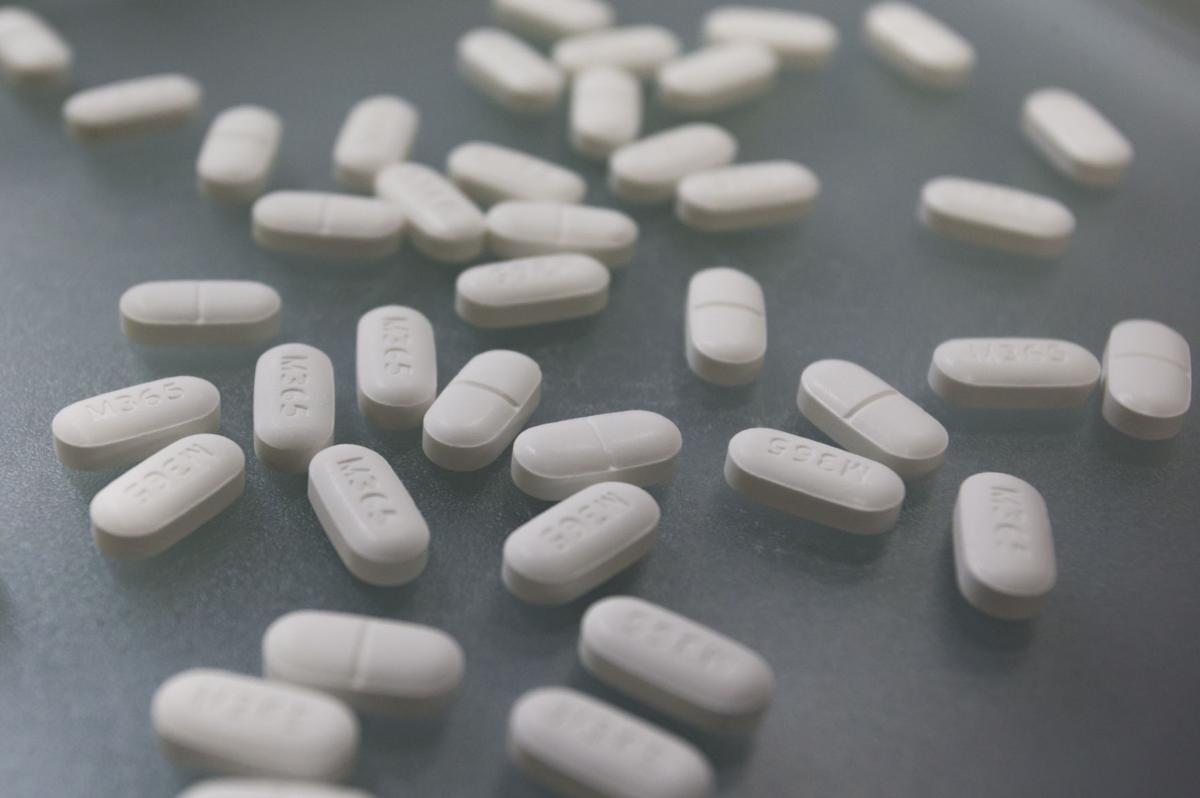 Hydrocodone pills are laid out on a counting tray to be counted at Murray’s Drug in Heppner on Friday afternoon.

Ann and John Murray pose in front of the Heppner location of Murray’s Drug Friday afternoon.

Hydrocodone pills are laid out on a counting tray to be counted at Murray’s Drug in Heppner on Friday afternoon.

UMATILLA COUNTY — In the year 2006, the world was mourning the death of Crocodile Hunter Steve Irwin, arguing about Al Gore’s “An Inconvenient Truth” and buying their first Blu-ray discs.

In the medical industry, doctors were being told that too many patients were in pain after being denied their “right” to prescription painkillers known as opioids.

Murray, who runs Murray’s Drug in Heppner, Boardman and Condon with her husband, John Murray, said there wasn’t the same level of awareness around opioid addiction back then.

Opioid overdose deaths in Oregon peaked that year, at 238.

After waging a yearlong legal battle, the Washington Post recently obtained data from the Drug Enforcement Administration tracking the path of every prescription pain pill in the United States between 2006 and 2012. It shows millions of opioids were flowing into Eastern Oregon each year.

From 2006 to 2012 Oregon received more than 1.3 billion prescription pain pills, according to the Post’s database. Of those, 22,583,610 were supplied to Umatilla County pharmacies — enough for every person in the county to receive 43 pills per year. Morrow County pharmacies received 1,235,200 pills, enough for 15 pills per person per year. Those numbers don’t include prescriptions patients received directly via mail order.

John Murray said the database has its limits — their Condon pharmacy, for example, shows a high “pills per person” count for Gilliam County because it doesn’t take into account that they also serve neighboring counties, such as Wheeler and Sherman, which don’t have any pharmacies.

“I applaud looking at these numbers, though, because you have to start somewhere,” he said.

Since the Post’s database came out, some pharmacists have shifted blame for opioid overuse on doctors, saying they didn’t feel they could say no to filling prescriptions. But legally, pharmacists do have a right to step in when they have suspicious of abuse or other worries.

The Murrays say they often do just that.

They cross-reference the patient’s prescription history through the Prescription Drug Monitoring Program and will call up a physician to ask if they were aware the patient is already receiving drugs from another provider, are a first-time opioid patient or on other medicines, such as muscle relaxants that make opioid use more dangerous. The calls sometimes result in an agreement that the dosage should be adjusted.

They even worked with police when someone at an area clinic was illegally calling in prescriptions not authorized by the doctor.

“We’re the last line of defense people have (against misuse),” John said. “We have a co-responsibility with providers.”

Patients are also more likely to self-police their use these days after reading about the dangers or seeing someone close to them battle addiction.

On the other end of the spectrum are people still trying to game the system. Steven Hardin, emergency department manager for St. Anthony Hospital in Pendleton, said ER doctors are no strangers to people making up stories about having injured themselves while traveling or getting their medication stolen.

St. Anthony doesn’t replace prescriptions patients claim were lost, stolen or “eaten by the dog,” Hardin said. And when someone comes in looking for a new prescription for an injury, the department can use the Emergency Department Information Exchange to check their story.

“We’ll ask if they tried anyone else and they’ll say no, but EDIE will tell us Joe already hit up two other emergency rooms in the last 30 days,” Hardin said.

The emergency room hands out significantly fewer opioids than it used to. In the past, someone with an injury that would be expected to heal in a few days might have automatically been given a 30-day supply. Now, they will get two or three days’ worth.

ER departments have shifted from “just believing patients,” Hardin said, to checking history, alerting primary care providers of ER visits and comparing the pain level patients claim with what X-rays and other tests are actually showing.

Safe use of opioids

On the other hand, Hardin said, they don’t want to scare off people who legitimately need something stronger than ibuprofen. Opioids can help someone function in the early stages of healing from surgery or serious injury, which can be healthier than lying down all day just thinking about their pain.

The Centers for Disease Control provides guidelines for taking pain medications safely, encouraging people to never take more than prescribed or for longer than prescribed, and to step down their use as their pain decreases.

Jaine Crowell, community health educator for Good Shepherd Health Care System in Hermiston, said mixing opioids with other medications or alcohol is one of the main causes of overdoses. The hospital is starting to hold trainings for the public on how to administer Nalaxone, which reverses the effects of an overdose.

Those who have prescription medications in the house are encouraged to lock up the drugs they’re actively using and safely dispose of anything extra, cutting off opportunity for theft by friends or family secretly battling addiction. Area police departments have secure drug take-back boxes, and Good Shepherd recently added one to their pharmacy for people who don’t feel comfortable dropping off unused pills at the police station.

Crowell said they are also working with other partners in the area on a campaign to reduce the stigma of admitting an addiction to opioids — something she said can affect people of any demographic.

Juli Gregory, education director for Good Shepherd, said there are a lot of resources for people who find themselves addicted to painkillers, from peer support groups to counseling. One frustration, however, is that Medicare does not pay for inpatient rehabilitation treatment for addiction.

“It’s not just people who recreationally use drugs,” she said. “Seniors have a high rate of addiction.”

As awareness has increased about the addictive nature of opioids, medical providers are upping their focus on controlling pain without medication.

Dr. Miriam Washington, a physiatrist for the clinic, said the newer generation of doctors is more wary of prescribing opioids.

“Many primary doctors are looking for a specialist that can help get their patients off opioids, so interventionists like pain physicians and physiatrists are in higher demand to provide more alternative pain control options,” she said in an email. “Further, the understanding of the psychological component to pain and our reaction to it has garnered interest and the need for pain psychology.”

She said studies have suggested that opioids, while effective in the short term, are no more effective than Tylenol in treating chronic pain. It’s important medical providers address root causes of pain, she said, and manage expectations so that patients understand that in some cases it is not possible to live completely pain-free.

As the country has been gripped by a crisis of addiction and overdoses, lawmakers on the state and federal level have passed new laws addressing the epidemic. Some of those have resulted in the prescription and emergency room monitoring databases listed above, while others have increased penalties for improper prescribing or increased money for treatment.

In October, President Donald Trump signed the SUPPORT for Patients and Communities Act, a package of laws which Rep. Greg Walden told the East Oregonian is “the most significant effort ever made to combat a single drug crisis.”

Among its provisions were reauthorization to continue providing $500 million a year for the opioid crisis, increased measures to stop fentanyl from illegally entering the country, removing some restrictions on medication that treats opioid addiction and increasing access to Nalaxone for first responders.

In the past few years, Walden has held roundtables in Pendleton, Hermiston and other parts of Oregon about opioids, taking feedback from medical providers, law enforcement, mental health agencies and people in recovery from addiction. He said in an emailed statement that as chairman of the Energy and Commerce Committee he also conducted hearings that resulted in a 325-page report “that uncovered numerous warning signs and red flags missed by wholesale drug distributors and the Drug Enforcement Administration (DEA) that contributed to the opioid epidemic.”

He added, “We’ve made progress, but there is much left to do and I plan to continue to hold roundtables, propose legislation, and monitor this epidemic until we can solve it once and for all.”

Where the drugs went