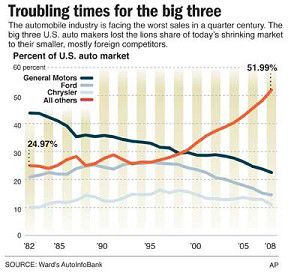 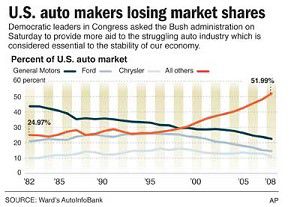 DETROIT - At Ford Motor Co. they called it "Blue," a team set up around the year 2000 to design an array of small, fuel-efficient cars to compete with the Japanese.

It didn't get far because no one could figure out how to make money on low-priced compacts with Ford's high labor costs. Besides, the automaker was racking up billions in profits by selling pickups and sport utility vehicles. Times were good and gas was cheap.

"Blue" is only a small blip in automotive history, but it tells a big part of the story about why Detroit automakers are in a mess so critical they could be only months away from bankruptcy.

Democratic leaders in Congress asked the Bush administration on Saturday to provide more aid to the struggling auto industry, which is bleeding cash and jobs as sales have dropped to their lowest level in a quarter-century.

House Speaker Nancy Pelosi and Senate Majority Leader Harry Reid said in a letter to Treasury Secretary Henry Paulson that the administration should consider expanding the $700 billion bailout to include car companies.

Critics say leaders over the years at Ford Motor Co., General Motors Corp. and what is now Chrysler LLC were slow to take on unions, failed to invest enough in new products, ceded the car market to the Japanese and were ill-prepared for the inevitable rise in gas prices that would make their trucks and SUVs obsolete.

"There's been 30 years of denial," said Noel Tichy, a University of Michigan business professor and author who ran General Electric Co.'s leadership program from 1985-87 and once worked as a consultant for Ford. "They did not make themselves competitive. They didn't deal with the union issues, the cost structures long ago, everything that makes a successful company."

Industry representatives, however, say their critics are simplistic, giving them no credit for huge progress this decade in cutting costs, raising productivity, and building competitive cars while handling multiple government regulations and a powerful labor union.

"In the last five years, there's been more restructuring done in the automotive business than any other business in the history of the United States," said Tony Cervone, a GM vice president of communications.

Whatever the reasons, the Detroit Three are closer to collapse than ever, and likely won't make it without billions in government loans.

On Friday, GM posted a $2.5 billion third-quarter loss and ominously said it could run out of money before the end of the year. The company spent $6.9 billion more than it took in for the quarter and reported that it had $16.2 billion in cash available at the end of September.

Ford reported a $129 million loss but said it burned up $7.7 billion in cash for the period. It had $18.9 billion on hand as of Sept. 30. Its chief financial officer says he's confident Ford will make it through 2009, but that's because the company took out a huge loan last year.

Industry analysts believe Chrysler, now a private company that does not have to open its books, is as bad off as GM as U.S. sales continue to plummet because of tight credit and lack of consumer confidence due to the economy.

To survive, automakers are pressing Washington for $50 billion in low-interest loans on top of $25 billion already approved to build more fuel-efficient vehicles. The $25 billion, though, is gummed up in Energy Department regulations and may not be available until next year.

The industry's path to cliff's edge is a complex one that even critics say is intertwined with government fuel economy and safety regulations and the United Auto Workers union.

The demise started in the 80s when Toyota Motor Corp. and Honda Motor Co. mastered building reliable and efficient cars while the Detroit Three lagged behind.

As GM, Ford and Chrysler saw their market share start to slip, the 90s arrived and high profits returned as Americans snapped up pickup trucks and SUVs.

As Honda and Toyota took over the small and mid-size car markets, Ford, GM and Chrysler put most of their resources into trucks and SUVs, which brought in billions in profits that covered growing health care, pension and labor costs.

"In a market-based economy when you have to try to be profitable, you go where the money is," said David Cole, chairman of the Center for Automotive Research in Ann Arbor.

When times were good, the automakers did not take on the UAW, which the companies say drove up their labor costs to $30 per hour more than Japanese companies paid their workers. The figure includes pension and health care costs for hundreds of thousands of retirees.

When GM pushed for changes in 1998, the union went on strike at two key Flint, Mich., parts plants, shutting down the company and costing it about $2 billion in profits.

"They were making money and the union had a monopoly," Cole said. "They'd shut them down. That's why they had some very lengthy strikes that were very painful."

But when the SUV and truck market started to fade in the mid-2000s, executives realized their business model would no longer work and began globalizing their vehicles, streamlining manufacturing processes and developing new and better cars.

The UAW, realizing that the companies were in trouble, agreed to a landmark new contract last year that nearly eliminated the labor cost difference between the Detroit Three and the Japanese, shifting retiree health care costs to a union-administered trust fund.

But just as the cost cuts started to take hold and new products were rolling out, gas prices rose rapidly to around $4 per gallon and Wall Street collapsed, virtually eliminating credit which 60 percent of car buyers need.

Automakers have all said bankruptcy is not an option because people would not buy cars from a company that might not exist in a few years. But if the car companies run out of money and can't pay the bills, bankruptcy could be forced on them, according to industry analysts.

GM's statements that it may run out of cash this year or next likely will have an effect on sales, Libby said.

"It doesn't help, and they know that," he said.