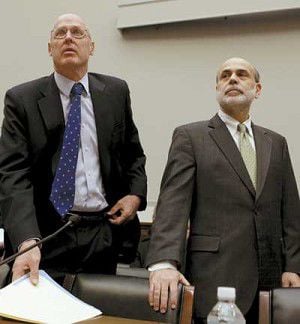 <a href="http://eastoregonian.com/SiteImages/FileGallery/510.pdf"&gt;Click here to see a PDF timeline of the bailout plan.</a>

<a href="http://eastoregonian.com/SiteImages/FileGallery/510.pdf"&gt;Click here to see a PDF timeline of the bailout plan.</a>

Paulson and Federal Reserve Chairman Ben Bernanke were on Capitol Hill defending their management of the bailout program, just one week after the administration abandoned the original strategy behind the rescue.

Although having a U.S. auto company fail during such a fragile time for the economy would not be a "good thing," Paulson told the House Financial Services Committee that he remains against diverting some of the bailout money to aid Detroit as the panel's chairman Rep. Barney Frank, D-Mass., and other Democrats want.

"I don't see this as the purpose" of the bailout program, which is intended to stabilize jittery financial markets and get lending flowing more freely again, which eventually should help revive the ailing economy, Paulson said.

The U.S. had "turned a corner" in averting a financial collapse, but more work needs to be done to get things back to normal, he said.

Focusing the program on infusing billions into banks - and possibly other types of companies - to pump up their capital and bolster lending to customers was deemed a faster and more effective approach to stabilizing the financial system than buying rotten assets from financial institutions, the centerpiece of the original plan, Paulson said.

Buying those toxic debts would have required a "massive commitment" of the bailout money, Paulson told the panel. As economic and financial conditions quickly worsened, it became clear that the first installment of the money - $350 billion - for that purpose "simply isn't enough firepower," he said.

It's crucial that the administration be nimble in assessing changing conditions and adapt the bailout strategy accordingly, the Treasury chief said.