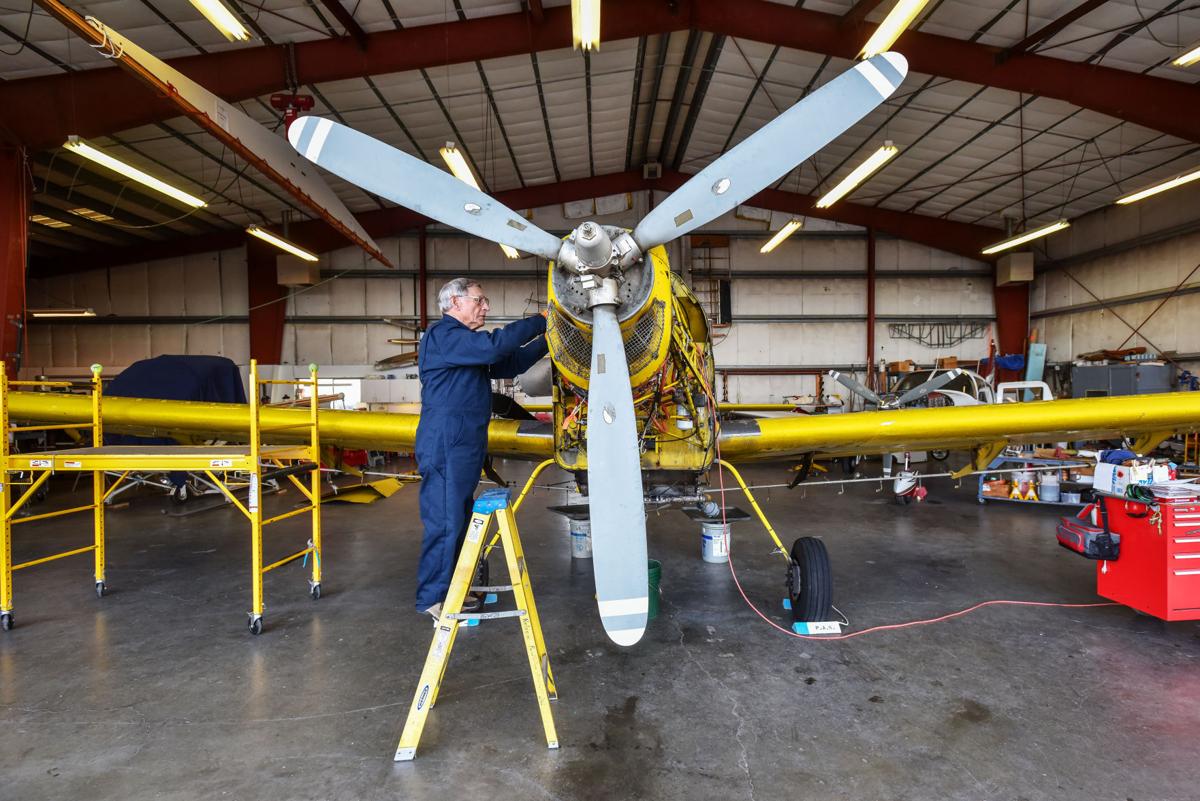 Harold Nelson, owner of Pendleton Aircraft Service, works on removing the oil filter on an Air Tractor while performing an annual inspection on the aircraft Thursday in his hanger at the Eastern Oregon Regional Airport in Pendleton. 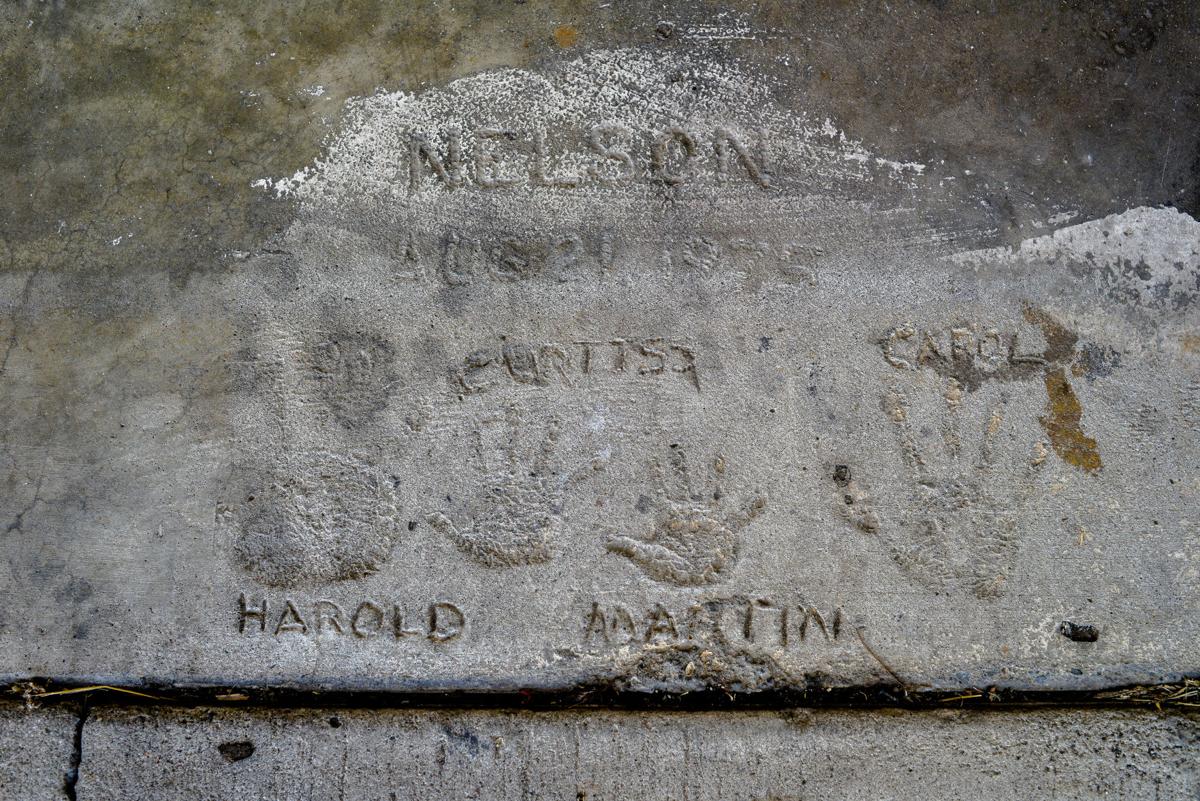 The handprints for the entire Nelson family lie in the foundation of the aircraft hanger at Pendleton Aircraft Service. All of the Nelsons left their prints during the construction of the building in 1975. 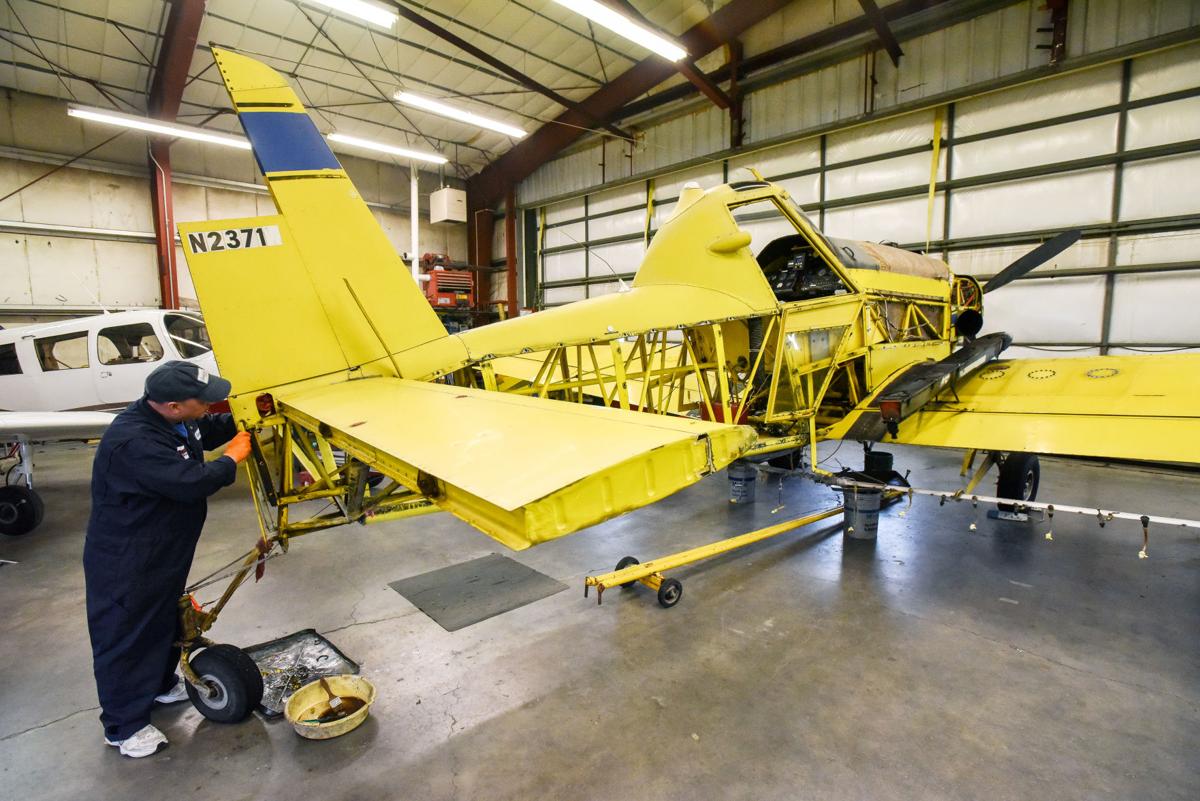 Curtiss Nelson works on cleaning the tail structure of an Air Tractor while performing the annual inspection for the aircraft Thursday at Pendleton Aircraft Service at the Eastern Oregon Regional Airport in Pendleton.

Harold Nelson, owner of Pendleton Aircraft Service, works on removing the oil filter on an Air Tractor while performing an annual inspection on the aircraft Thursday in his hanger at the Eastern Oregon Regional Airport in Pendleton.

The handprints for the entire Nelson family lie in the foundation of the aircraft hanger at Pendleton Aircraft Service. All of the Nelsons left their prints during the construction of the building in 1975.

Curtiss Nelson works on cleaning the tail structure of an Air Tractor while performing the annual inspection for the aircraft Thursday at Pendleton Aircraft Service at the Eastern Oregon Regional Airport in Pendleton.

Those tensions recently rose to the forefront at a Pendleton Airport Commission meeting Wednesday, where airport manager Steve Chrisman and Pendleton Aircraft Service owner Harold Nelson got into a heated exchange over what airport leases should look like going forward.

At the heart of the debate is the “reversionary clause” of an airport lease, language in the contract that allows the city to take back rented property once a lease ends.

Airport officials are saying that the reversionary clause has long been included in lease contracts with tenants, and by updating the language, the city is merely trying to comply with Federal Aviation Administration regulations.

Airport business owners — a group that includes aircraft mechanics, inspectors and service providers — argue that previous city administrations allowed them to enter and renew leases without the threat of clawing back the land and a more strict application of the reversionary clause would kill the general aviation business community.

The land lease system is a result of the unique real estate setup at the Eastern Oregon Regional Airport.

After the federal government transferred management of the airport and the surrounding industrial area to the city following World War II, the FAA required the city lease the land instead of selling it.

With a few exceptions, all businesses and organizations located at the airport own the buildings they operate in while leasing the ground from the city.

In an interview after the meeting, Chrisman said the city was compelled to take another look at the reversionary clause when some longtime leaseholders like Nelson saw their leases expire. Nelson said his last lease expired more than three years ago and he’s been renting month-to-month ever since.

Chrisman said he doesn’t want to engage in this conflict, but the FAA doesn’t allow the city to rent to tenants in perpetuity without recapturing the value of the land.

If the city doesn’t include some sort of reversionary language in its lease contracts, Chrisman said it could put the city at risk of losing its federal airport funding, referencing the $8 million runway project the FAA is funding this year.

Nelson was apologetic about losing his temper at the commission meeting, but he and many other airport entrepreneurs remain unconvinced about Chrisman’s arguments.

Nelson said he built the Pendleton Aircraft Service building in 1975 and leased with the airport for 40 years afterward.

Curtiss Nelson, Harold Nelson’s son and a mechanic at Pendleton Aircraft Service, said there’s also an emotional appeal to the building, pointing to the handprints the family left before the concrete floor set.

The elder Nelson said he leased the land for $170 per month before his last lease expired, and although he’s willing to pay more in his next deal, he doesn’t like the reversionary options the commission is discussing.

At a meeting Wednesday, the commission hunkered around a conference table to discuss those options.

The first option was a standard reversionary model: A tenant could rent airport property for a maximum of 50 years. At the end of the lease, the tenant could either pack up their building and leave, allow the city to take the building, or renew the lease and pay the a “reversion deferral fee” that covers the value of the building.

The second option has a tenant paying 1.5 times the standard lease rate for a maximum of 40 years. Once the lease ends, the premium could either be reimbursed if the tenant walks away from the land or applied toward the reversion deferral fee if they choose to renew.

Not every commissioner was enthusiastic about the proposal.

“Having a reversionary situation with any sort of clause is going to be a massive disincentive for folks to come here,” commissioner Mike Short said.

David Styer, a member of the airport commission and the owner of All Terrain Aircraft, said he did some research and not every federal airport had reversionary clauses in their lease contracts.

Modeled after similar leases at the airport in Medford, Styer suggested including a third option where a tenant could pay twice the market lease rate in exchange for having no reversionary language in the contract.

But after the meeting, many business owners said they didn’t like the alternatives.

Owners like Nelson and South County Helicopter owner Cliff Hoeft didn’t like the thought of continually paying the value for a building they already paid for.

In the owners’ view, taking a straight reversionary clause would devalue their investment because potential buyers wouldn’t want to acquire a property that could be taken back by the city and would put a damper on future growth as well.

Ultimately, the commission voted to table the issue so members could take a closer look at Styer’s proposal. The commission will meet again for a special meeting on Feb. 27.

After the meeting, Styer said he was encouraged by the commission’s receptiveness to his idea, but admitted it could all be undone once the recommendation goes before the city council.

A non-voting member of the airport commission, City Councilor Becky Marks told the commission that it needed to focus on what was best for Pendleton taxpayers.

“This has got to continue, or at least get on the foot, of sustainability,” she said. “We’re not sustaining this airport with the businesses that we have here now, except for UAS, maybe. So think about that. We’re the ones who are having to cover the bill. Whether you fly into here or work into here, you’re making money. We have the right to make money too. That’s the bottom line.”

The airport business owners said they felt unfairly burdened to financially support the airport and got short shrift compared to the emerging unmanned aerial systems industry.

On Tuesday, the council unanimously approved to take out a $2.6 million loan to build an 18,000-square-foot hangar on behalf of the drone company PAE ISR.

Wahl said an emerging industry like UAS was volatile and could fluctuate in the future, but general aviation has been a mainstay at the airport even in lean years.

Chrisman said he doesn’t want there to be a perception that it’s manned flight versus unmanned flight at the airport. He said he sees value in having aircraft service providers at the airport and includes them in marketing pitches.

Chrisman had a simple answer for general aviation business owners who wanted to stay long term while complying with FAA lease rules.

“Stay forever, my friend,” he said.