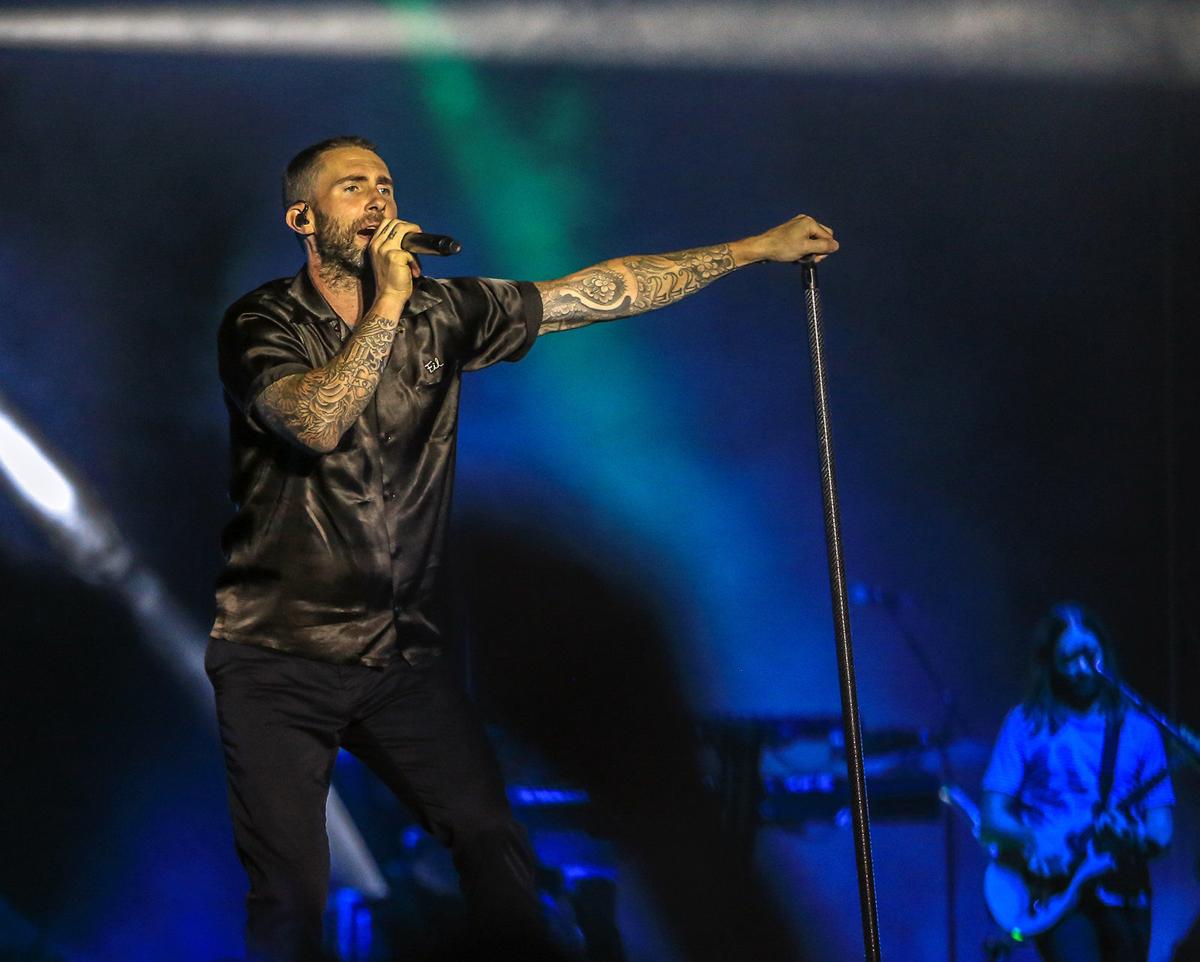 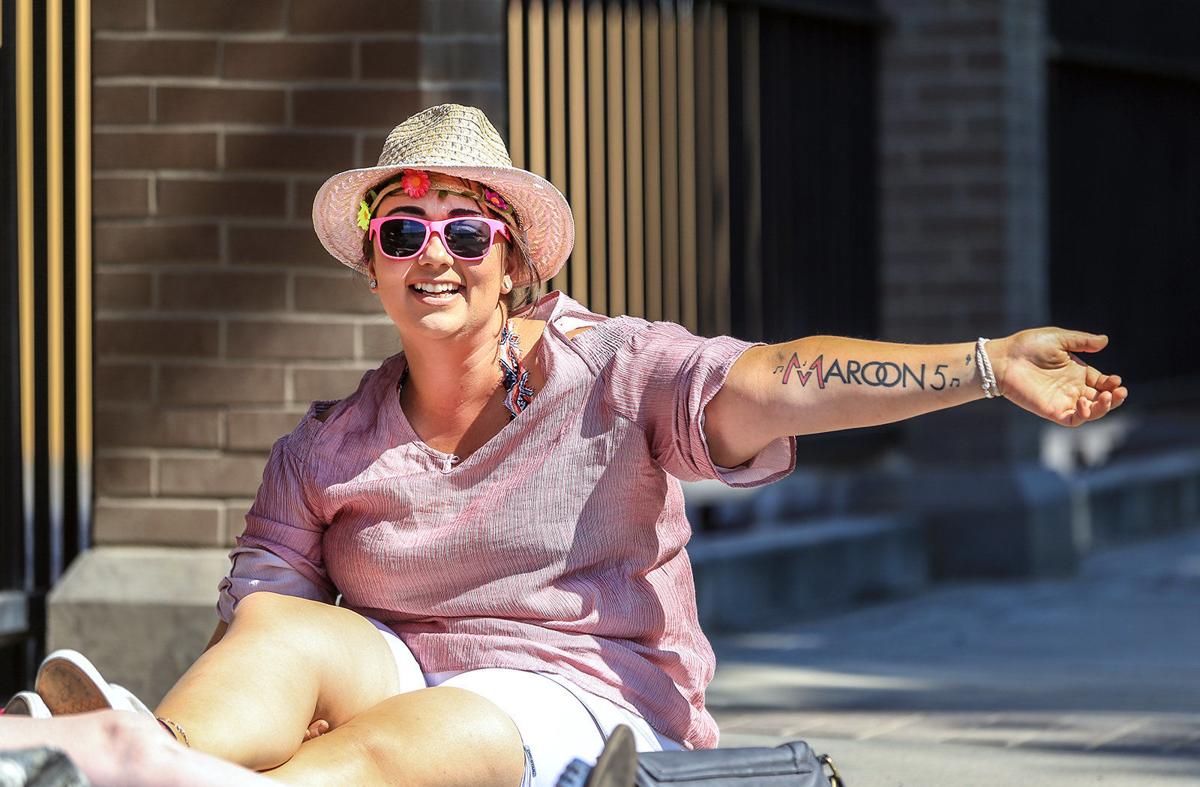 Heather Hampton, of San Diego, first in line to get into the Pendleton Whisky Music Festival, started waiting early Saturday morning so she could find a spot in the front row to see her favorite group, Maroon 5. Hampton has attended almost 200 Maroon 5 concerts. 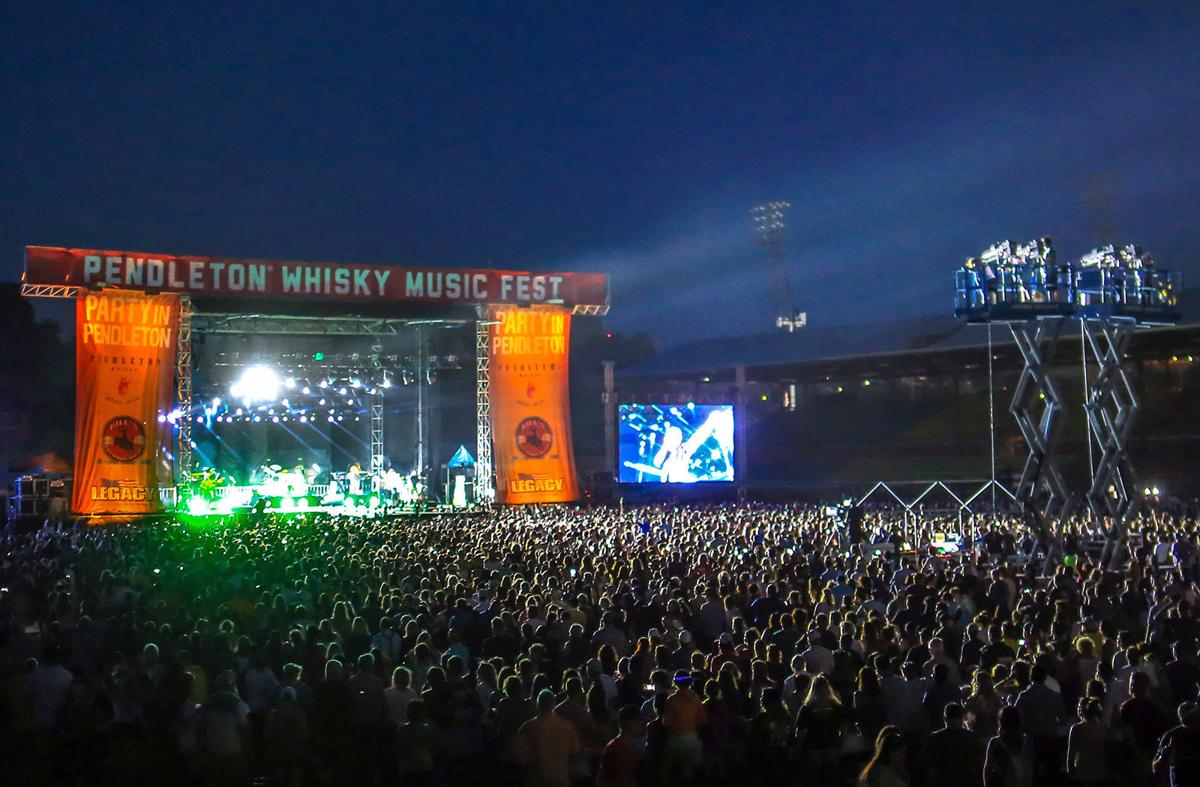 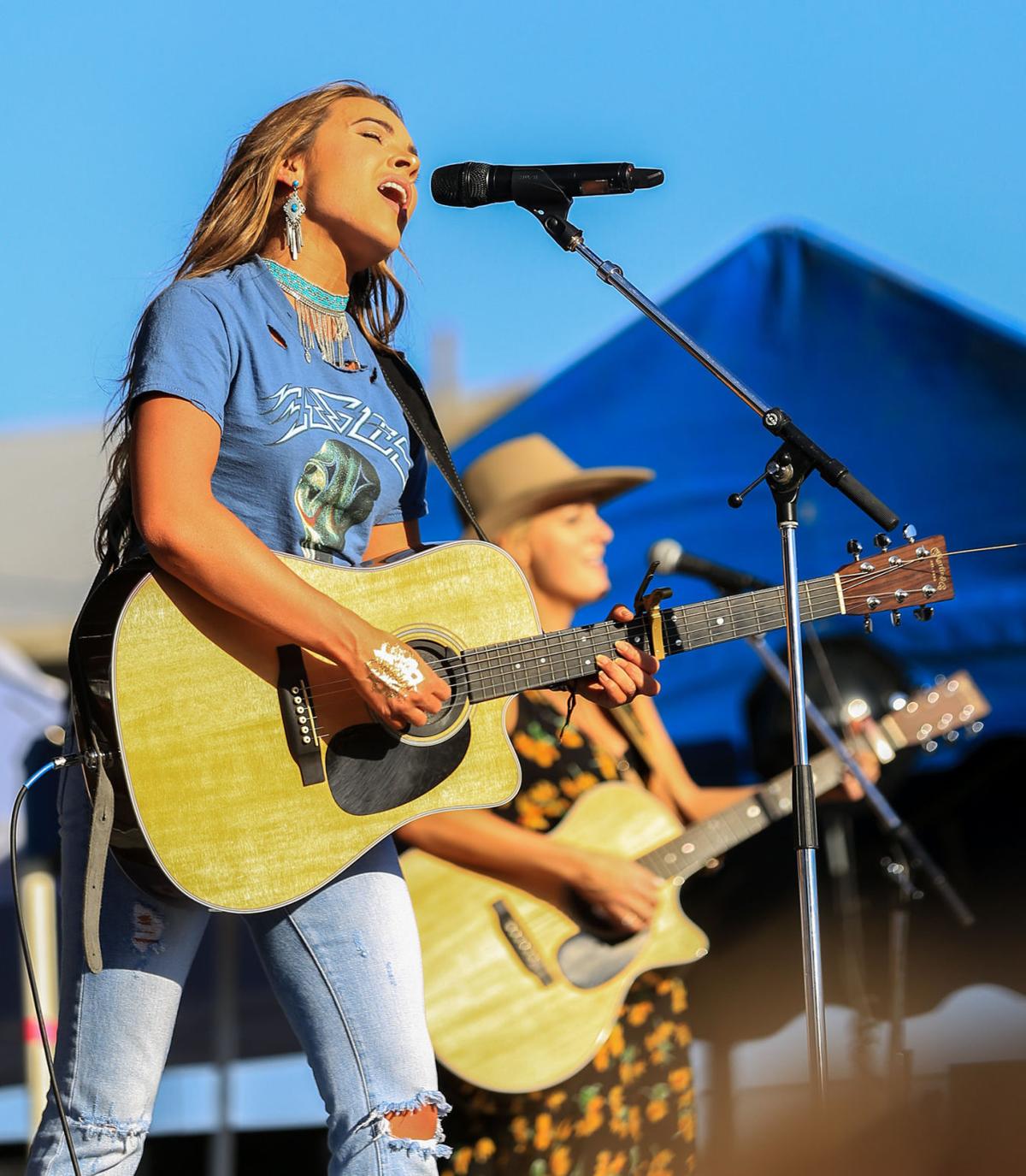 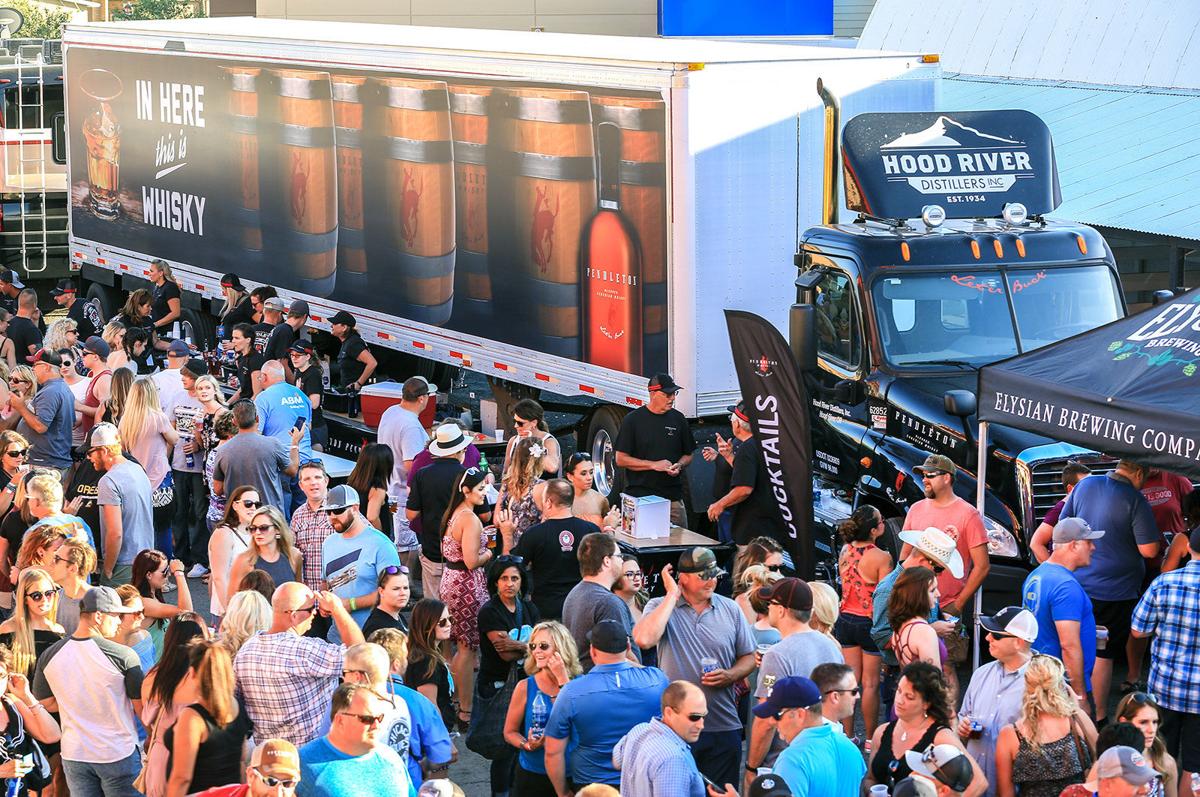 Audience members fuel up on whisky and beer during the second annual Pendleton Whisky Music Fest.

Heather Hampton, of San Diego, first in line to get into the Pendleton Whisky Music Festival, started waiting early Saturday morning so she could find a spot in the front row to see her favorite group, Maroon 5. Hampton has attended almost 200 Maroon 5 concerts.

Audience members fuel up on whisky and beer during the second annual Pendleton Whisky Music Fest.

The first time Heather Hampton saw Maroon 5 in concert, the band was the opening act at a West Hollywood nightclub in 2002.

“The first time I saw them live, they were just super talented and super catchy,” Hampton said.

Music fans and critics agreed, and Maroon 5 has since ascended to superstardom, winning multiple awards and topping the U.S. Billboard album charts.

Hampton, who works as a mail carrier in San Diego, can say she’s been there since the beginning. She has a tattoo of the band’s name on her left forearm, and a video on YouTube from 2011 when she was invited on stage by lead singer Adam Levine at the Hollywood Bowl.

“She started it all,” Levine told the crowd. “She was our first huge fan.”

Hampton made the trip to Pendleton with her friend and fellow Maroon 5 superfan Tracy Wesolowski. The two women previously met about five years ago at a K-Mart in Los Angeles, where they attended a promotional event for Levine’s clothing line. Now, they travel to shows together whenever they can.

The duo arrived Friday night following a 12-hour drive from Wesolowski’s home in San Jose. By 7 a.m. Saturday, they were the first to line up outside the Pendleton Round-Up Stadium waiting for gates to open at 4:30 — joined by several more of their friends from past concerts.

“If we’re not against the rail in the front, we’re mad,” Hampton said. “We don’t want anyone else in front of us.”

Andy McAnally, festival co-organizer, said more than 16,000 people packed the Round-Up Grounds for the sold-out show, representing a 30 percent increase over last year’s inaugural event. A mob of concert-goers watched from the grass infield against the stage, dubbed the “Party Pit,” while others filled the surrounding grandstands.

McAnally said they also quadrupled their workforce to help solve some of the logistical problems from year one — such as long waits in line for drinks, which was a common complaint among fans.

Overall, McAnally said he and fellow organizer Doug Corey were extremely happy with the improvements they made.

“We got a lot of positive feedback this year,” McAnally said. “Logistically, it’s just a huge operation.”

McAnally said he and Corey will soon be turning their attention to next year, and will again be seeking the biggest and best musical acts to headline.

“Everyone keeps asking how we’re going to top Maroon 5,” he said.

With Whisky Fest in the books, Hampton is already looking forward to catching the band over Labor Day Weekend in Aspen, Colorado, and will celebrate her 200th Maroon 5 concert by traveling overseas to Peru.

Attending that many shows does get expensive, she admits, but it helps to travel with a group and split the cost with her fellow fans.

“The more people who go, the cheaper it is,” she said. “The gas and motel is probably the most expensive.”

If Whisky Fest is any indication, Maroon 5 also has a plethora of fans right here in Eastern Oregon.

Amanda Whitman, of Grass Valley, was one of eight women who made the trip together from Sherman and Gilliam counties to celebrate their friend’s birthday. They wore matching hot pink shirts, with the Maroon 5 lyric “This Summer’s Gonna Hurt.”

“We like to look at Adam (Levine),” Whitman said with a laugh. “And the music is great. It’s a lot of fun.”

Tonya Myers, who lives in Pendleton, said the concert lured in friends from all over Oregon, including Portland, Roseburg, La Grande and Baker City. It was nice to see a big name band like Maroon 5 help to put Pendleton more on the map, she added.

“This is the event of the year we’ve been waiting for,” Myers said. “We get to share the energy of our town. It’s fantastic.”