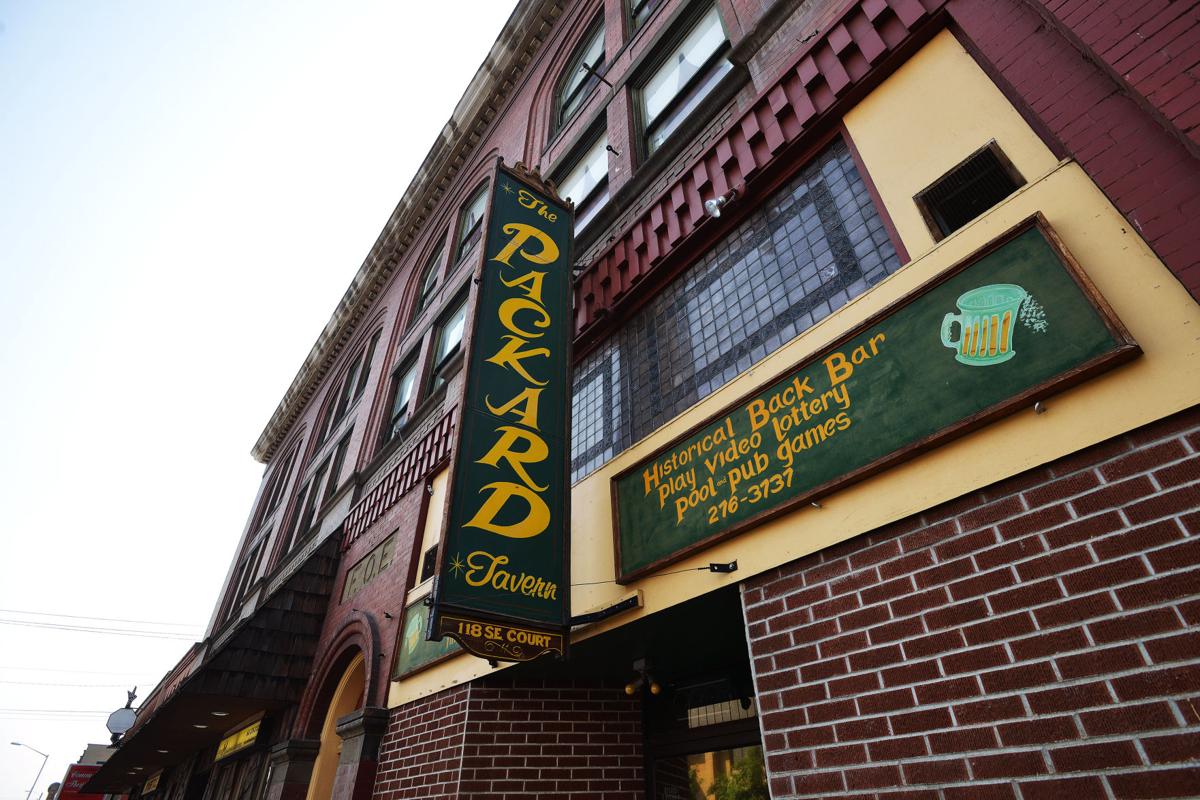 The Woodman of the World building on Southeast Court Avenue in Pendleton. 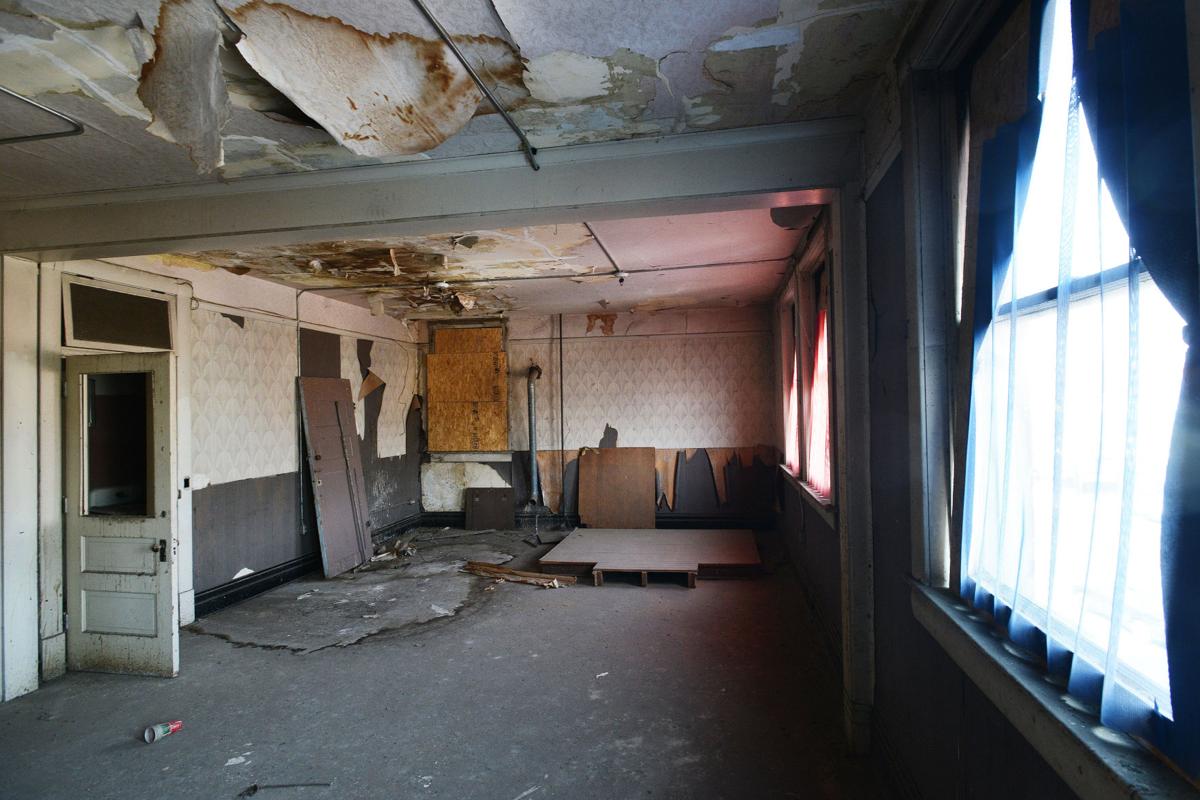 Water stains and other damage in a room on the second floor of the Woodsmen of the World building on Southeast Court Avenue in Pendleton. 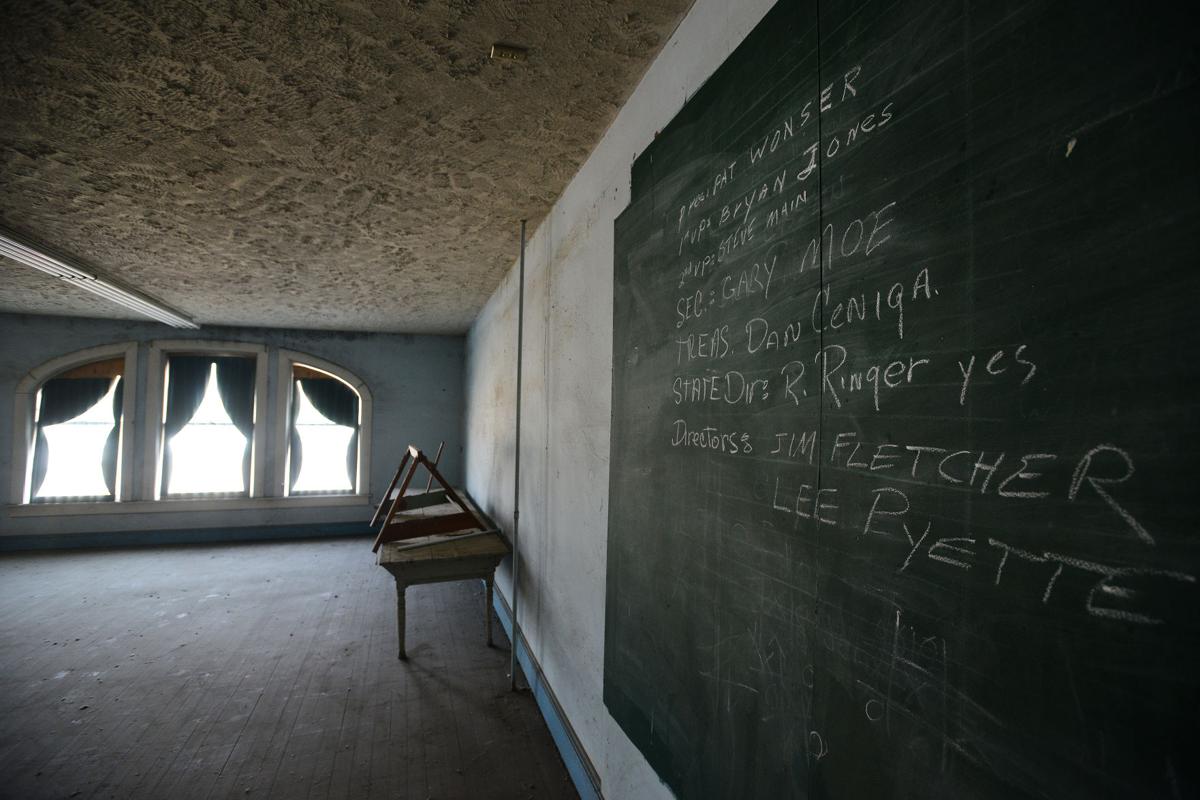 Names written in chalk are still on a chalkboard in a meeting room last used by the Jaycees in the Woodsman of the World building on Southeast Court Avenue in Pendleton. 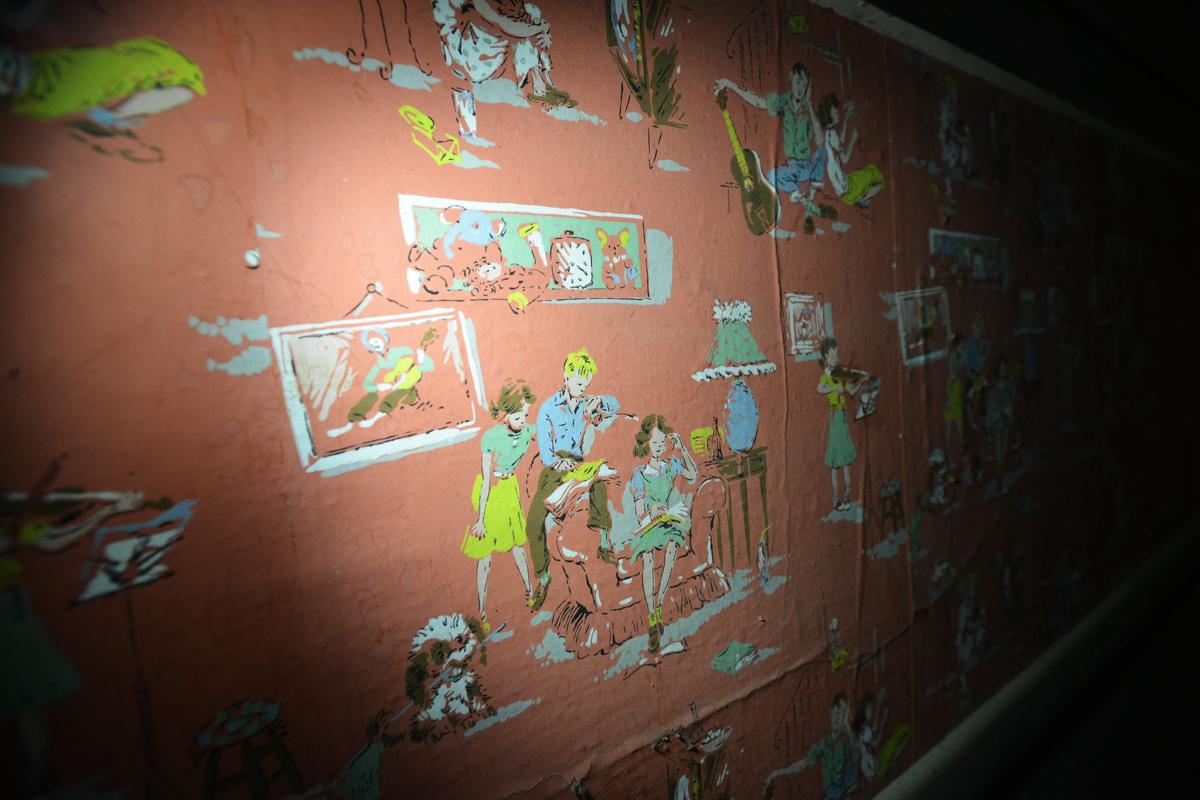 Old wallpaper still lines the walls of a washroom in the Woodman of the World building on Southeast Court Avenue in Pendleton. 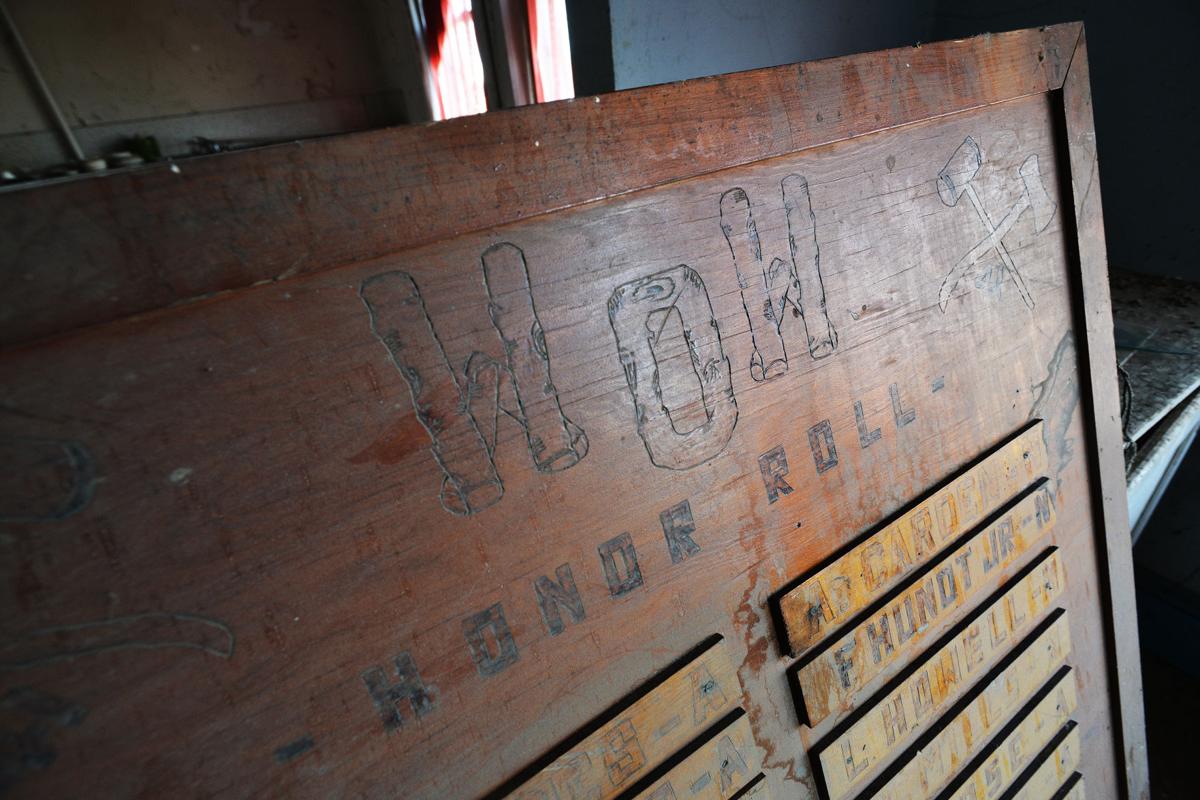 The Woodman of the World building on Southeast Court Avenue in Pendleton.

Water stains and other damage in a room on the second floor of the Woodsmen of the World building on Southeast Court Avenue in Pendleton.

Names written in chalk are still on a chalkboard in a meeting room last used by the Jaycees in the Woodsman of the World building on Southeast Court Avenue in Pendleton.

Old wallpaper still lines the walls of a washroom in the Woodman of the World building on Southeast Court Avenue in Pendleton.

At the dawn of the twentieth century, downtown Pendleton’s second story offered a diverse set of services.

Boarding houses, meeting halls, a gymnasium and more could all be found on the second floor of Pendleton’s merchant quarter. But decades of neglect left many of them unused.

The Pendleton Development Commission is eager to revive downtown’s second story spaces and invited several building owners to a design meeting at city hall Thursday in its ongoing attempt to invest in renovating them.

The commission hired LRS Architects of Portland to tour the buildings and create floor plans that would show owners how modern apartments or offices would fit in these historic spaces.

The five buildings with owners that indicated serious interest in renovating their second stories span across downtown Pendleton.

But all of the owners share the challenge of not only restoring the old spaces, but complying with modern codes and laws while keeping the project economic feasible.

Rod Parker of Pioneer Title needs to pry off two planks nailed to the door to access the second floor directly above his office.

The second floor is dominated by a gymnasium, which used to host basketball games and boxing matches, Parker said.

The third floor meeting room includes faint reminders of the defunct local chapters of the fraternal organizations that used to occupy the building — Woodmen of the World and the Junior Chamber of Commerce.

One piece of left-behind memorabilia is a wood-carved Woodmen “honor roll” which appears to include the names of longtime Round-Up rodeo clown Allen “Monk” Carden and former Pendleton Mayor Norm Gorfkle.

Gail Sargent of LRS presented two options: turn the second and third floor into a seven-unit apartment complex that would include a couple of two-floor lofts or use it for a fitness center complete with a restored gymnasium.

Parker liked the idea of a mixed-use development, but Sargent said any option would probably require a second staircase to accommodate emergency evacuation.

Parker estimated it would take $2 million to renovate the second and third floor of the Woodmen building.

Another former fraternal organization meeting place, Great Pacific hosted the development commission on its second story for a previous meeting.

One half of the second floor is dressing rooms, closets and other small spaces while the other half revolves around a large meeting space.

Unlike the other buildings, LRS didn’t include an apartment option.

While Great Pacific co-owner Ken Schulberg considered turning the space into apartments in the past, he now envisions it as an event venue with a main event hall, dining room and green room.

Sargent said turning the GP’s second story into apartments would also sap the space of all its character.

The reason for the disparate façades varied. While the owners of the LaFontaine building kept its original character, the hardware store was given a “modernized” stucco façade long before Zimmerman owner Jim Naughton bought the building in 1982.

On the other hand, Joe’s Fiesta owner Joe Meda decided to paint over the Columbia Hotel’s original whitewash with his own vibrant hues, much to the dismay of state historic preservation officials.

“Good or bad, people talk about it,” Meda said. “There’s no such thing as bad publicity.”

The outward differences belied the fact that all buildings had old boarding houses on their second floors, meaning LRS had similar prescriptions for each space.

For all three, Sargent recommended turning them into four, 1,000 square foot apartments or five offices.

The people in the room debated whether office space or apartments were the better investment for second floors.

While Meda thought his second floor might be a good spot for a dental office or credit union, Alan Feves, representing the LaFontaine building, wasn’t sold on the idea.

“I don’t see a big market for office space, but I’m not sure if that’s accurate or not,” Feves said.

Jordan McDonald, the co-owner of Wtechlink and a member of the development commission’s advisory committee, estimated there was 20,000 to 40,000 square feet of available office space in Pendleton, half of which was in the downtown area.

The Robinson Building was its own unique case — with its second floor completely gutted, renovators wouldn’t be forced to reconfigure the historical layout.

“(It’s a) clean slate,” Sargent said. “No historical fabric to deal with.”

That doesn’t mean the second floor doesn’t have its problems. LRS noticed that the ceiling was sagging and the building would probably need a completely new roof in the longterm.

In addition LRS provided two different six-unit configurations for apartments, engineer Dave Krumbein said he’s also made his own plans for the space.

Alderson said the family is also considering installing an elevator between Sister’s and old city hall that would connect the two buildings.

For the city’s park, building official Ty Woolsey said he would balance safety and business concerns when evaluating renovation plans.

“It’s going to be a challenge but it’s something we’re going to figure out through conversation,” he said.

While not every building is eligible, officials from LRS and the city encouraged the owners to look into the government incentive programs from the city, state and federal government.

Sargent promised that LRS would continue to work with the building owners to create more detailed designs and a more accurate quote of the total cost it would take to restore their second stories.