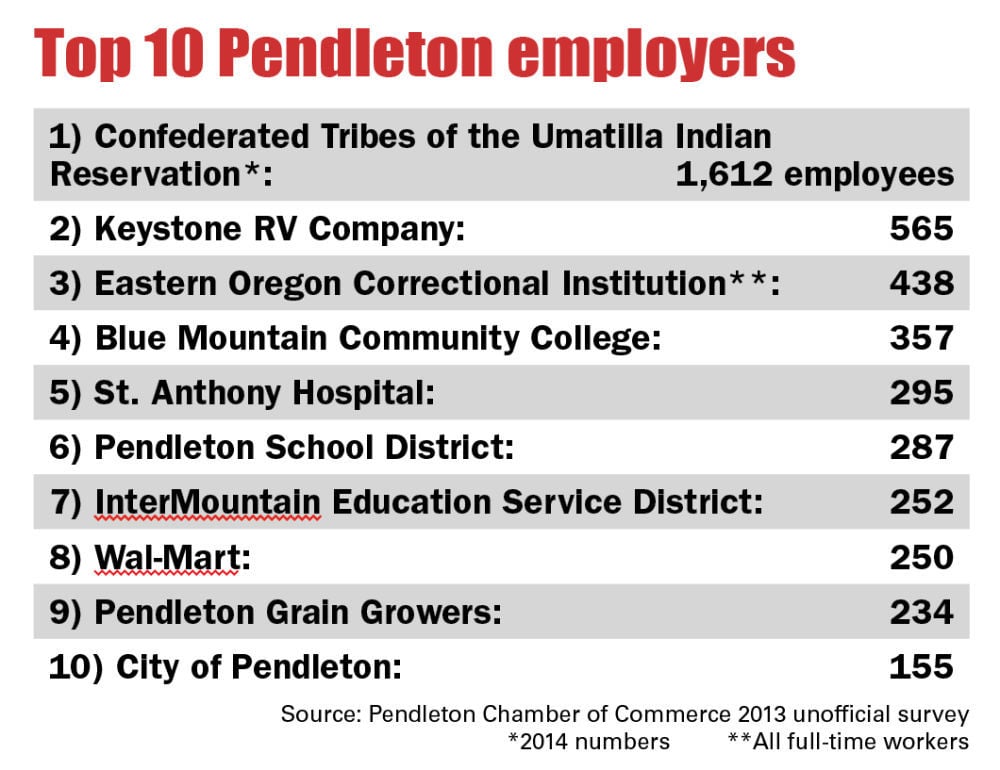 In the early 19th Century, many settlers and traders needed help from Eastern Oregon tribes to tap the regions economic potential.

While a centurys worth of anti-Indian legislation eroded that relationship, the Confederated Tribes of the Umatilla Indian Reservations economic status has come full circle in recent years.

With more than 1,600 employees and a payroll of $50 million, the CTUIR is Pendletons largest employer.

According to a 2014 informational guide, the CTUIR has created 1,000 jobs since 1992  many of which have gone to Pendletonians.

Both Tovey and Pendleton City Manager Robb Corbett agree that the city and reservations good relationship is essential for both entities.

Youd be hard pressed to find another tribal community and a city that has as positive relationship as ours, Tovey said.

Even though the 1994 construction of the Wildhorse has stimulated much of the CTUIRs economic growth, the tribal government is making headway on diversifying its enterprises. Of the eight tribes that operate casinos in Oregon, the CTUIRs 396 non-gaming jobs are the most in the state, according to a 2012 Worksource Oregon study.

While the reservation continues to expand ventures like Cayuse Technologies and Yellowhawk Clinic, the CTUIRs 2010 comprehensive plan acknowledges that the reservation needs more industry than the casino.

Economic diversification is a critical issue facing CTUIR, the plan states. Currently, the Reservation is essentially a company town, highly dependent on a single employer, and very vulnerable if something happens to that employer.

To combat this trend, the CTUIR is aiming to establish 10 non-gaming enterprises by 2030.

Within city limits, the Pendleton city government is also hoping to spark some new enterprises.

Since the Eastern Oregon Regional Airport was approved by the Federal Aviation Administration as a unmanned aerial systems test site at the end of last year, the city has dedicated a considerable amount of resources toward turning the airport into an economically viable area.

The city has already spent $300,000 to convert a portion of the airport into a test range and wants to borrow an additional $2.5 million to extend utilities to the west end of the airport.

City officials maintain that the airport area is the last major piece of industrial land in Pendleton and will give the city a competitive advantage in the region.

Leaders envision the airport as not only a hub for drone testing, but also a destination for UAS manufacturing and sales.

According to a 2012 economic analysis of Pendleton by Worksource Oregon, the local retail industry could use a boost.

Pendleton holds a 37 percent share of Umatilla Countys retail market despite having the second highest population.

Worksource Oregon regional economist Dallas Fridley said the subject would require further research, but added the reason could be associated with Pendletons stagnant population growth or the citys proximity to larger shopping destinations like the Tri-Cities.

Corbett said many retail outlets and smaller retailers cant compete with the advent of big box stores and the Internet.

As a way to stimulate small business, Corbett said officials are continuing to focus on the citys downtown area through the urban renewal district and the jump start loan program.

Hospitality is one of the few private industries to enjoy success, where Pendleton as a tourist destination commands 42 percent of the hotel and leisure market.

Knights Inn manager Surya Das bought the motel two years ago and commuters from Boise, Portland and Spokane have made his business shine.

Pendleton has been heaven to us, he said.