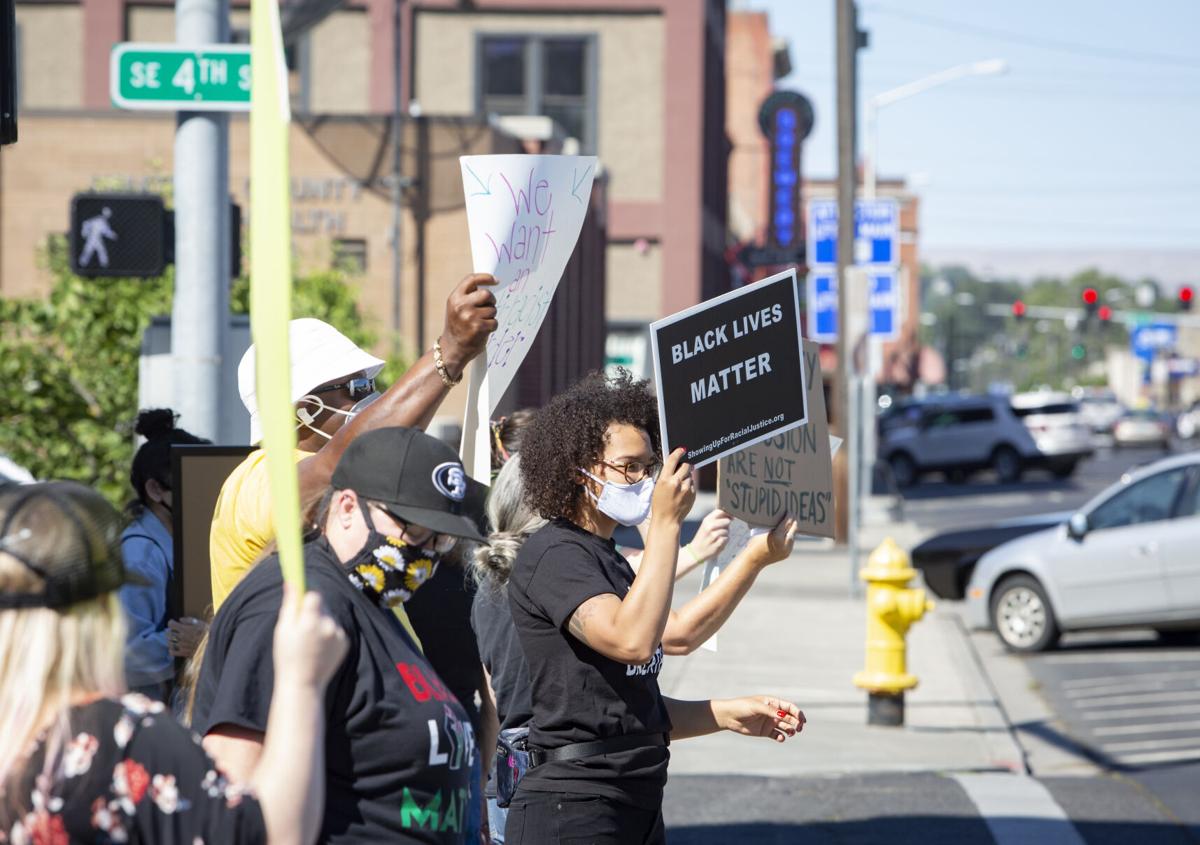 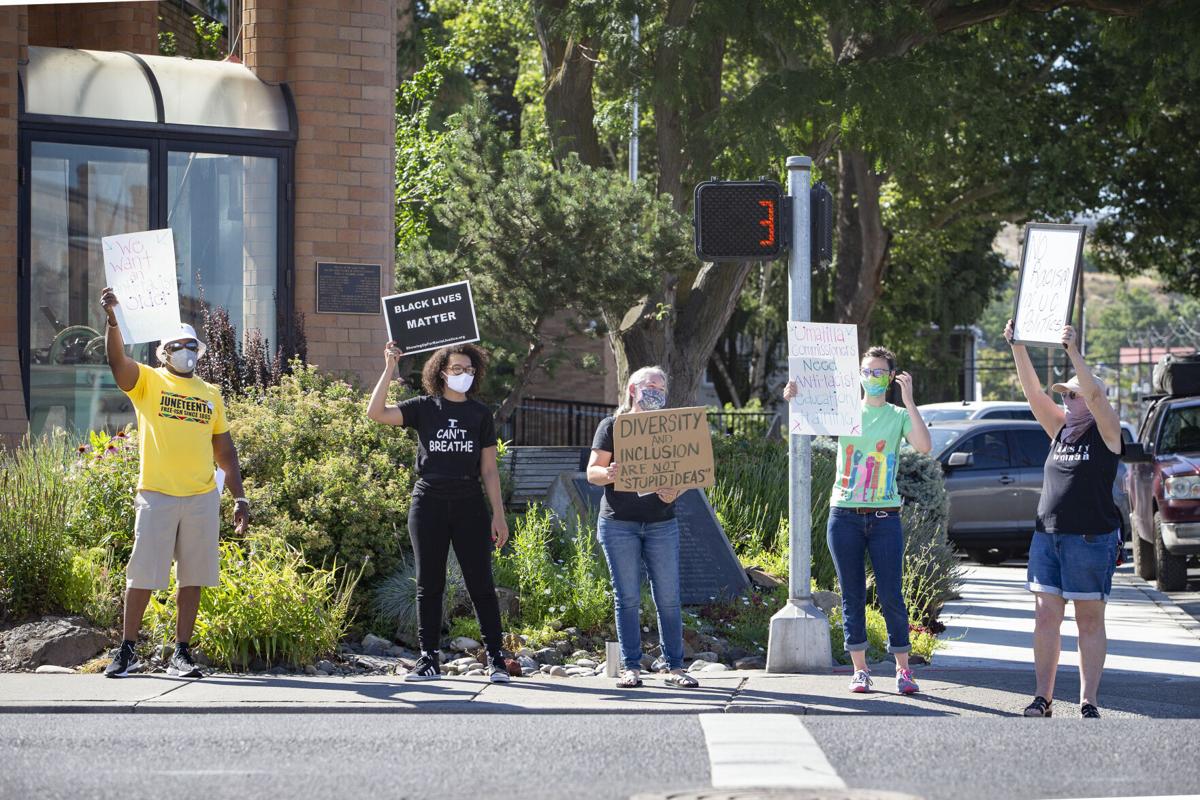 A small group of protesters line Southeast Court Avenue outside of the Umatilla County Courthouse in Pendleton on Wednesday, July 15, 2020. The protesters gathered outside the courthouse to protest in opposition to the commissioners’ dismissal of systemic racism in Umatilla County. County officials adopted a resolution on Wednesday, Aug. 5, 2020, in response to the order placed on July 15 by advocates for the Black Lives Matter movement. 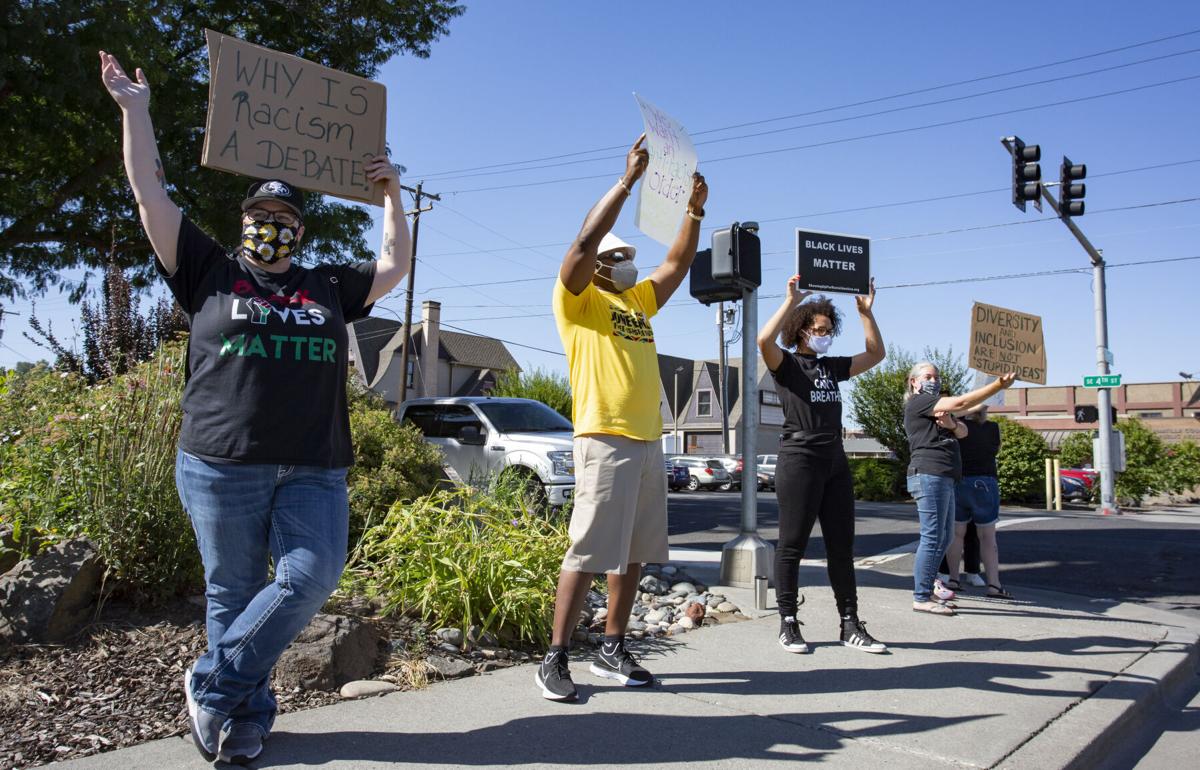 A small group of protesters line Southeast Court Avenue outside of the Umatilla County Courthouse in Pendleton on Wednesday, July 15, 2020. The protesters gathered outside the courthouse to protest in opposition to the commissioners’ dismissal of systemic racism in Umatilla County. County officials adopted a resolution on Wednesday, Aug. 5, 2020, in response to the order placed on July 15 by advocates for the Black Lives Matter movement.

PENDLETON — A group of Umatilla County residents is asking county commissioners to support communities of color.

Advocates for the Black Lives Matter movement drafted and submitted an order to the Umatilla County Board of Commissioners on Wednesday, July 15. The group stood protesting outside the courthouse during commissioners’ meeting.

“We demand an order of support from our commissioners, as vigorous as the Order of support for Law Enforcement, for our BIPOC (Black, Indigenous and People of Color) community in Umatilla County,” the order read.

The group submitted the order — titled “In the Matter of Support of BIPOC and Protest Community in Umatilla County” — after the meeting started, outlining their response to the board of commissioner’s order of support for law enforcement that was unanimously adopted last month.

“I am here as part of a collaborative effort to bring some material to our county commissioners in regards to some of their comments they have made to our community both off the record and on the record,” said Nastasha Stiles, a protester outside of the Pendleton courthouse. “We are here because we are requesting an order drafted to protect people of color in our community. This is what we’ve delivered to them today.”

The order asks county commissioners to put forth a resolution against racism and violence, and outline the ways county officials plan to support BIPOC communities and deal with systemic racism in Umatilla County.

Stiles said they also presented a copy of an order that Clackamas County adopted, using it as an example of how the group would like county commissioners to respond to systemic racism.

The meeting started with a reading of two letters in support of law enforcement, one from Good Shepherd Hospital and another from an anonymous community member.

The commissioners did not comment on the protesters outside of the courthouse.

“I wanted to send a message to the commissioners that they have to be for everyone here in Pendleton,” she said. “Not just a single body or their own preference.”

Protester John Carbage stated he would like to see the commissioners outline a plan that discusses police officer training in terms of racial profiling and sensitivity training.

“I don’t think they realize they’re racially profiling when they do it, but they need to understand what it is so they know what they’re doing wrong,” he said.

Stiles said she tried to attend the commissioner’s meeting, but couldn’t get in due to COVID-19-related safety limitations imposed. She said she also didn’t realize she needed to reserve a spot to be in the meeting. Instead, they delivered the order to the commissioners’ offices.

Umatilla County Responds, a community-led organization created to respond to Umatilla County public officials, stated in a July 15 Facebook post that the order was dropped off to all three county commissioners, John Shafer, William Elfering and Geroge Murdock.

“We were able to leave a binder for all three commissioners with our collaboratively collected demand for an Order of Protection and Support for BiPOC Communities in Umatilla County,” the post stated.

The next commissioner meeting is slated for Aug. 5, but it has not yet been determined if the order will be discussed then.

Schafer said he has not read the order, but will comment as soon as he does. A timeline for review was not provided.

“I’m out here because I’m really shocked and ashamed of what our leaders think of our community,” protester Becca Finney said. “There is racism here and to say there isn’t is ridiculous.”

UMATILLA COUNTY — As a civil rights movement continues with protests against racism and police brutality around the nation, neither candidate …