Police and medics gather around a vehicle on the side of the road just past Exit 210 on Interstate 84 in Pendleton.

An ambulance helicopter with a victim aboard takes off from Interstate-84. 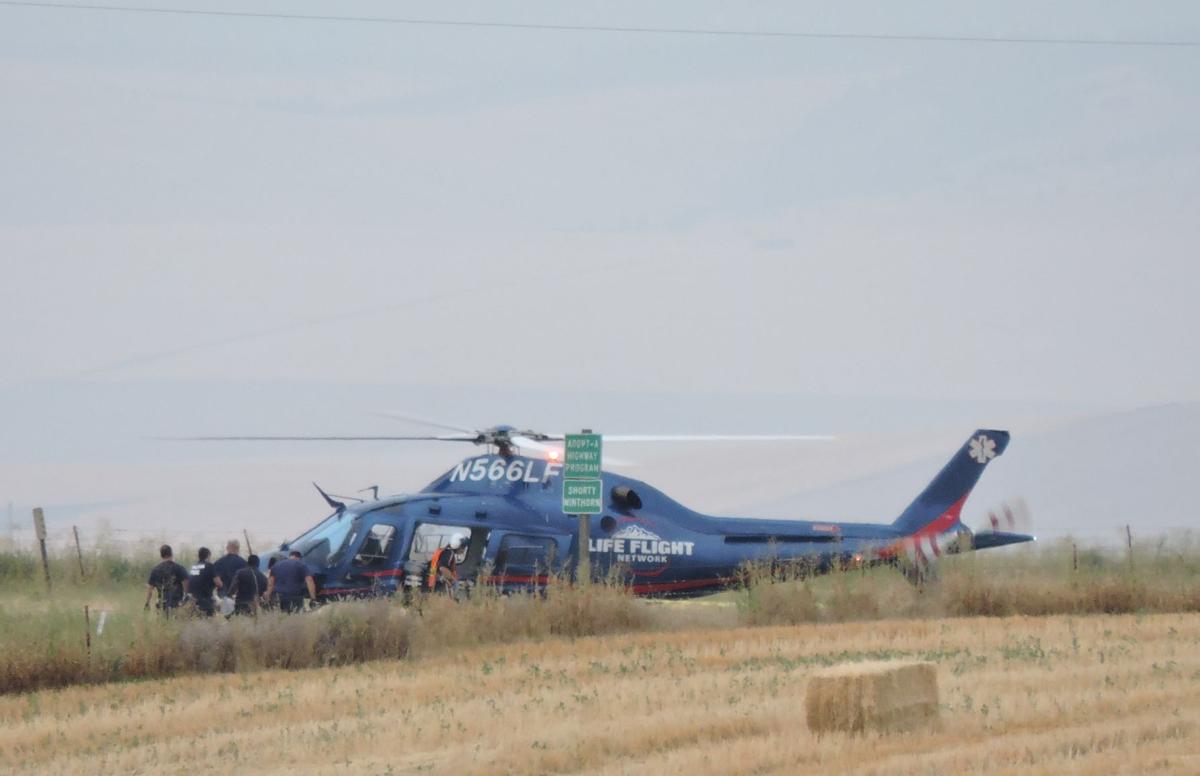 Emergency personnel transport a victim to an ambulance helicopter.

Police and medics gather around a vehicle on the side of the road just past Exit 210 on Interstate 84 in Pendleton.

An ambulance helicopter with a victim aboard takes off from Interstate-84.

Emergency personnel transport a victim to an ambulance helicopter.

[EDITOR'S NOTE: This story has been changed to reflect a correction. An earlier version misstated where the police pursuit began and what evidence police found of a shooting earlier that morning. The pursuit began on Southeast Nye Avenue and the police had found a bullet from a bedroom window frame.]

PENDLETON — Oregon State Police is investigating a shooting Thursday afternoon just outside Pendleton that resulted in a helicopter ambulance flying off with one victim.

Pendleton Police Chief Stuart Roberts said that when officers removed Ryan Newsome, 28, of Pendleton from the vehicle he was driving, he was gasping and had a pulse. Police and emergency medical technicians treated Newsome at the scene and he was taken by LifeFlight.

Roberts said he did not know Newsome’s status.

The incident initially began Thursday morning when officers received reports of shots fired in the 300 block of Southeast Dorion Avenue, Roberts said. When officers responded to the area, they retrieved a bullet from a bedroom window frame later in the morning.

Police later located Newsome’s vehicle and began a pursuit, but it was called off because the high speeds were deemed too dangerous to the public. Law enforcement again found Newsome’s vehicle shortly before 4:30 p.m. Roberts said he was behind Newsome on Southeast Nye Avenue when the vehicle went the wrong way at Exit 210. Roberts said police followed the suspect in the eastbound lanes of I-84 as he traveled eastbound in the westbound lanes of the interstate. The chase ended less than a mile east of the exit, according to witnesses at the scene. Police said Newsome’s vehicle eventually left the roadway where he was boxed in by police cars. Officers reported hearing a single gunshot from the suspect’s vehicle.

State authorities shut down the interstate, as police determined Newsome’s condition. Roberts said police broke the window to the vehicle, found and secured a gun and began first aid.

Newsome was recently released from prison after spending seven years in prison for sexually abusing and raping a 13-year-old girl. He was found guilty in 2011 of 11 felony sex crimes for having a sexual relationship when he was 19 with a then 13-year-old girl for three months in late 2009 and early 2010.