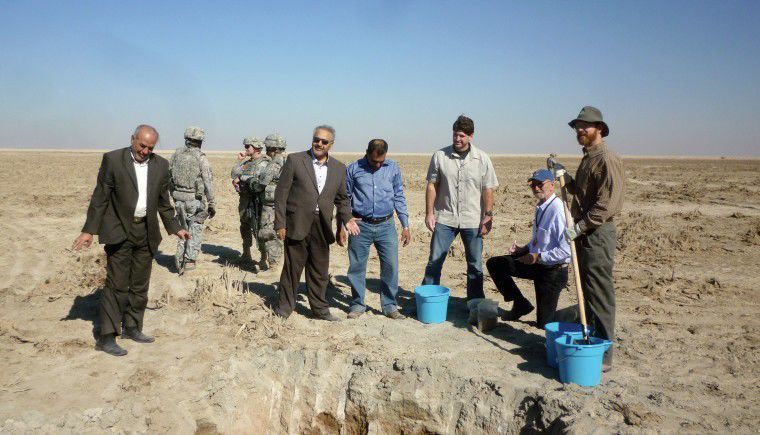 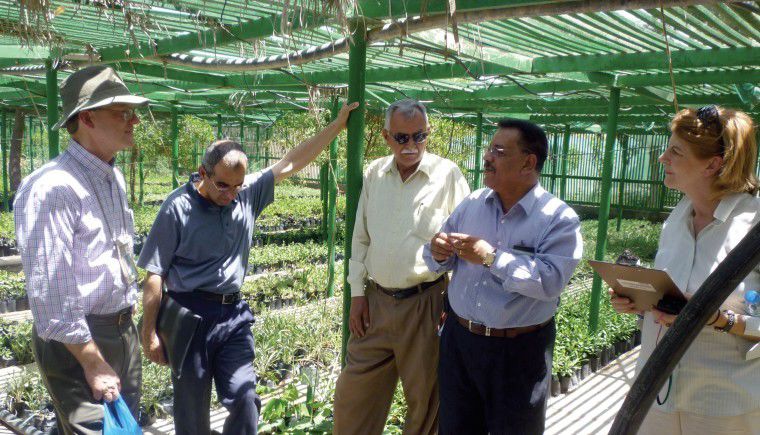 Sean Currans, left, visits a state nursery in Basra, Iraq, during his year working for the U.S. Department of Agriculture there.

Sean Currans, left, visits a state nursery in Basra, Iraq, during his year working for the U.S. Department of Agriculture there.

During the past year, agronomist Sean

Currans found himself fulfilling a unique role far away from

The owner of Rugged Country Plants in

Operating Base Basra in southern Iraq. When he went off base, he

wore a bullet proof vest and helmet. He was accompanied by an

interpreter. He worked for the U.S. Department of Agriculture

bringing Iraqi farmers up to date on modern agriculture

The reality is Iraq has been

isolated for 30 years and has not been adopting new technologies,

For instance, Iraq was the date palm

capital of the world 30 years ago, he said. There were once 30

million date palm trees, but that number has dropped to 2 million

today. Those left only produce about 10 percent of their potential

because of neglect and out-of-date farming practices.

Date palms took up a big portion of

palm conference in Abu Dhabi in the United Arab Emirates. There he

Six months later he set up an

exchange program between Iraqi date palm farmers and the American

They had a very enlightening and

wonderful time, Currans said. The Iraqis came back full of

compliments and praise for the hospitality and generosity of the

Californian host, all the things theyve learned and all the new

Since then, Agrotech employees

traveled to Basra to help the Iraqis design model farms.

Currans had the freedom to find this

the USDA program he works for operates. You go and see whats

going on in a province, he said.

You use your background and

to a more productive level. Professionally, its quite interesting

Currans was able to address another

more complicated and cultural issue, too.

Currans said, most farming was heavily controlled by the

government. Supplies like seeds and fertilizers came from Baghdad.

Then, after harvest, the government bought the crops.

The government is pushing for

privatization, for farmers to work things out on their own. But

only in the last year, Currans said, has the government begun to

make progress in that direction.

It is a big change and a big shock

to the farmers, he said. Theyre being told to go to a place

where they havent been before.

To help the Iraqis cope with these

to farmers in the west: communication.

American farmers get together all the

They meet at conferences,

agricultural supply offices, or at the local cafe for coffee. They

talk to each other as neighbors, Currans said. Iraqis dont have

that kind of cooperative communication as their culture. They dont

know what their neighbor is doing. They dont talk to each

So Currans worked to get farmers

together. He brought them to conferences, or to meals and

Then he and his interpreter would say

to the farmers, Wed like to be helping but we dont know how to

are your challenges? What are your problems? Lets talk about this

and work on it together.

This is all new for Iraqi

Freedom of speech and the ability to

organize and coordinate is not a part of their world view, Currans

said. They havent had the opportunity to get together and talk

In a way, he said, he was bringing a

very basic form of democracy to the Iraqis. After living under

first communist rule, and then under a dictatorship, the farmers

werent used to having someone ask what they needed.

just before Christmas. He is home for three weeks before leaving

again for a second year in Iraq. He has many goals, including

expanding on his date palm program. Also, by the time his second

year is done, he hopes he has taught the farmers enough about

communication that they can keep talking.

I hope to have enough organizing

meetings with the farmers to where they have a relationship with

each other and with the government, he said. When Im gone, I

hope they can carry on those things for more functioning dialogue

Though he enjoys the work and looks

forward to his next steps, Currans knows there is only so much he

can do in a year.

be Iraqis rebuilding Iraq, he said. Americans are not going to do

it. Its going to have to be them coming up with the appropriate

solutions for their own situation. I hope to help them take another