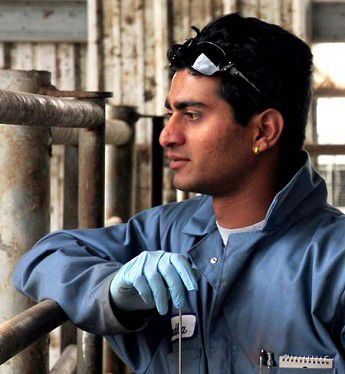 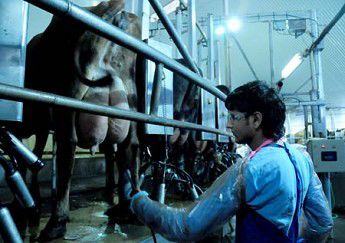 Ram Luitel works at his station on the cow carousel Thursday at Threemile Canyon Farms.<BR><I>Staff Photo by Brenna E. Chapman</I>

Ram Luitel works at his station on the cow carousel Thursday at Threemile Canyon Farms.<BR><I>Staff Photo by Brenna E. Chapman</I>

Ram Luitel faces the backside of an enormous circle of milk cows, a long-handled nozzle at his side. Wearing a long plastic apron, rubber boots and eye shields, he sprays the bulging udders with iodine, then gives each teat a quick pull to check for signs of infection.

As the cows rotate on an enormous carousel, other workers wipe off the iodine and attach milking cups. By the time she's completed a rotation, each cow will be milked out and ready to head back to a barn.

Thousands of cows pass by Luitel, 21, every day at Threemile Canyon Farms west of Boardman, the largest dairy in Oregon. It's not easy work. The days are long and monotonous, the work physically challenging.

But Luitel is cheerful. A year ago, he was a political refugee, living in a bamboo hut inside an enclosed camp in Nepal. Originally from Bhutan, he and his family were among thousands of refugees the Bhutanese government expelled in the early 1990s because of their ethnicity and religion. Luitel is part of an ethnic Nepalese group that practices Hinduism, which the Buddhist Bhutanese saw as a threat.

Luitel was 3 years old when his family arrived in Nepal. They lived in the refugee camp for years, where food was scarce and they were rarely allowed to leave. Once, they attempted to return to Bhutan by foot with a large group of refugees; when they were only two kilometers from Bhutan, the Indian army stopped them by throwing stones and beating people. At least two of the refugees did not survive the trip, he said.

Back in the camp, Luitel's family attempted to live a normal life. They ate rations from the Nepalese government and wore clothing the government donated to the camp once a year.

But Luitel was also lucky; he attended a camp school and then got permission to attend college outside the camp. He studied physics, and finished the equivalent of one year of college.

Then, last summer, the U.S. State Department's refugee program accepted Luitel's family - along with 5,320 other Bhutanese refugees - for settlement in the United States.

Luitel's family arrived in Boise, where they were met by representatives from the International Rescue Committee, an organization that helps refugees and other vulnerable people from war-torn areas of the world. The IRC provides them with a place to live, job-readiness classes and access to health care for about the first eight months of their stay.

"Basically, we provide them with all the essentials they need when they get here to get on their feet," said Leslye Moore, the executive director of IRC's Boise office.

Moore said that when IRC opened in Boise in 2006, employers were "pretty much knocking down our door to get refugees hired."

Refugees are generally stable and hard-working, Moore said, and they are willing to work in entry-level positions in housekeeping and food service industries. Although many of the refugees are highly educated, she said, they don't have the language skills to transition directly into their profession.

Since the economy soured in Boise, however, competition for even low-level jobs has gone up dramatically. Moore said IRC began looking outside the Boise area for available jobs.

Luitel initially worked as a temp at a microchip company in Boise until he was laid off. He ended up at Threemile Canyon Farms because livestock manager Walt Guterbock heard a story about the refugee organization one day on NPR.

Guterbock said Threemile Canyon Farms has trouble keeping the dairy fully staffed. Most of the applicants are Hispanic, he said, and while there is no shortage of people looking for a job, many are not legally authorized to work in the United States.

"I'd been thinking about finding a refugee organization for quite a while," he said.

Guterbock contacted the IRC and offered jobs to refugees. In January, a group of eight arrived from Boise. Although the language barrier is "an issue," Guterbock said he was impressed with the refugees' work ethic and cheerful attitude.

"Many of them have been through hell to be here," he said. "Some had been in the refugee camps for 15 years."

Threemile Canyon Farms offers the refugees about $9.50 an hour, plus benefits and evening English classes - although many, Guterbock admitted, are too tired at the end of the day to attend. But the refugees find ways to communicate, he said, and many of them are picking up Spanish quickly from their co-workers.

"I actually expected much more resistance or trouble (from the Hispanic workers)," Guterbock said, "but people have been giving them rides and sharing food."

There may be some rumors among the dairy's Hispanic workers that Guterbock intends to replace them with refugees, he said, but that's untrue. Threemile Canyon Farms still accepts applications and hires from the Boardman community, he said.

Still, the refugees have been so successful at the dairy that IRC has now placed 27 people there. They are also refugees from Africa and Iraq. Luitel lives at the Maple Crest apartments with his father, his uncle and his mother, who recently arrived from Boise.

Luitel said he wants to return to college and become a nurse someday. His brother attends Boise State University, he said, and Luitel said he hopes to follow his lead soon.

Another Bhutanese refugee at Threemile Canyon Farms is 22-year-old Radha Chapagai, who works as a breeder. Chapagai is college-educated and taught math and English as a teacher in a school outside the refugee camp in Nepal. He said being a Hindu in the United States is not always easy - he's a vegetarian and cannot celebrate Hindu traditions, such as the 15-day Dashara festival, in the same way - but he is thrilled to be here. Now that his support term from the IRC has ended, he is on his own now.

"I want to be self-independent," he said.

Chapagai said he was recently married, and wishes to bring the rest of his family from Boise soon. Back in Nepal, he said, it was a great difficulty to even buy a bicycle.

"You work for five to six months to have a bike," he said.

Now Chapagai drives a Toyota Celica, and he enjoys shopping at Walmart and the Dollar Tree - "I like low prices," he said with a grin.

Chapagai said he felt privileged to be working with cows, which are considered sacred to Hindus. Unlike some workers, he said, he never kicks them or treats them roughly.