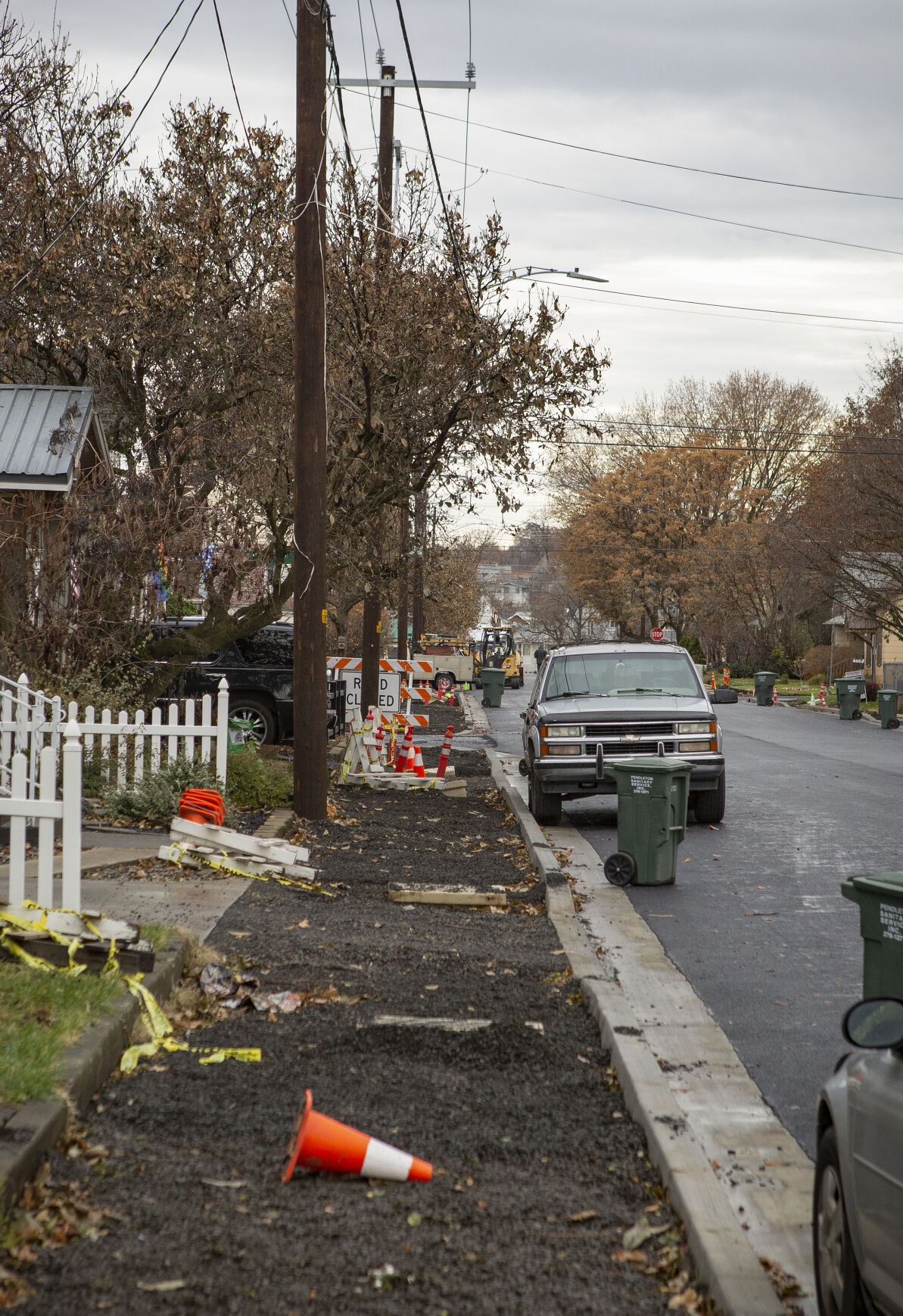 A section of sidewalk along Southeast Byers Avenue in Pendleton sits awaiting replacement on Monday, Nov. 16, 2020. 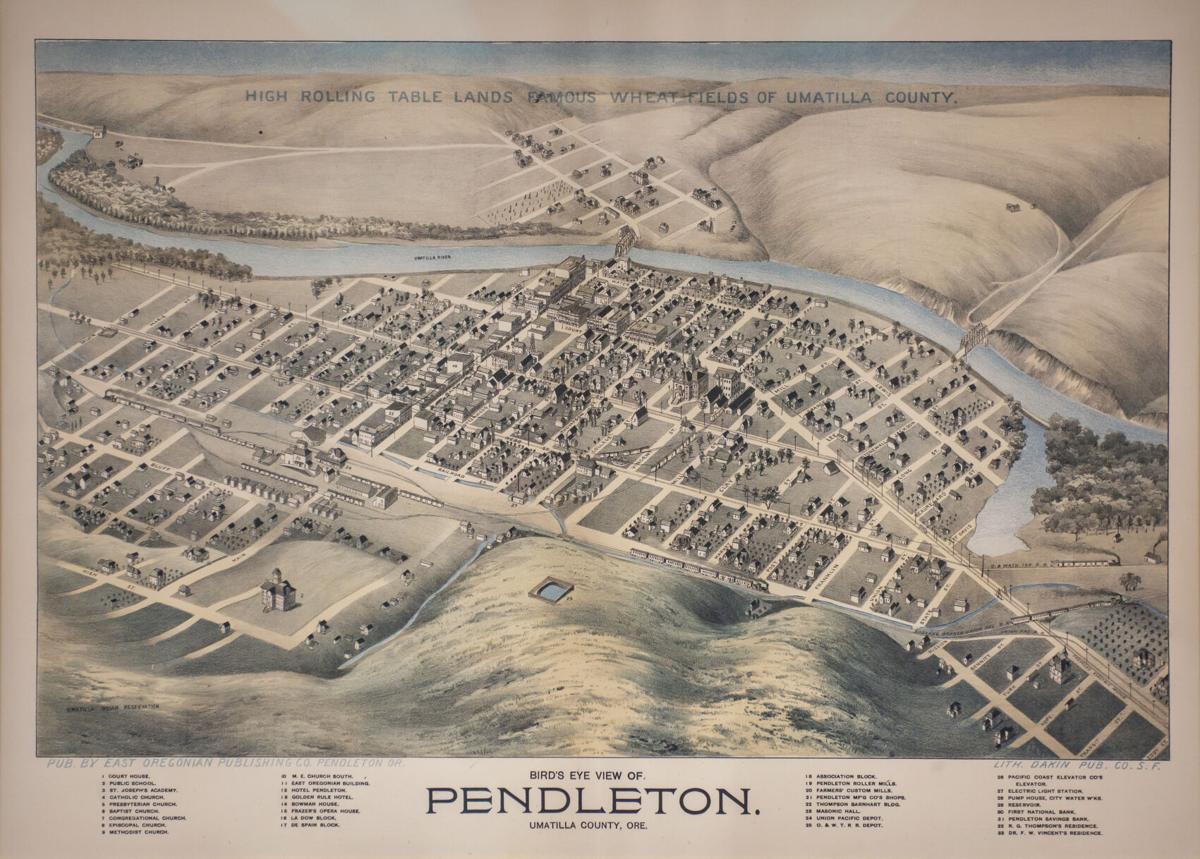 A map depicting a bird’s-eye view of Pendleton shows the town and its original street names around the year 1890.

A section of sidewalk along Southeast Byers Avenue in Pendleton sits awaiting replacement on Monday, Nov. 16, 2020.

A map depicting a bird’s-eye view of Pendleton shows the town and its original street names around the year 1890.

PENDLETON — As awareness spreads over the city of Pendleton’s antique sidewalk stamps, one resident decided to take visceral action against it.

Pendleton police recently cited Joshua Walker for breaking a sidewalk stamp commemorating Jefferson Davis and attaching a pro-Black Lives Matter sign to the remains, an act of protest, according to Walker.

In a Monday, Nov. 16, interview, Walker said he lives in the Southeast Byers Avenue area, where contractors are rebuilding and repairing streets and sidewalks as a part of a road construction project. As construction crews replace sidewalks, workers have been cutting out the sidewalk stamps, imprints in the concrete displaying the street’s old name, with the intention of reinstalling them later.

As he went out for a run on the morning of Nov. 10, he spotted a sidewalk stamp commemorating Jefferson Davis, the former president of the Confederacy. He found a sledgehammer at the scene and proceeded to smash apart the stamp.

He soon returned with a sign that states “Say Her Name Breonna Taylor,” and nailed it to the stamp’s remains. The sign references Taylor, a Black Louisville, Kentucky, woman who was shot to death by police in March. Her death and the lack of charges against the police who shot her helped galvanize the Black Lives Matter movement and led to protests throughout the spring and summer.

Walker said construction workers recorded him defacing the stamp, and police soon followed up with him. He said he was briefly detained while the police investigated the matter further, and was later released.

Police Chief Stuart Roberts said law enforcement issued a citation for third-degree criminal mischief the following day, but did not send him to jail as he awaits trial.

Despite the charges, Walker, 47, described breaking the stamp as an act of protest against a city that hasn’t reckoned with the country’s history of racism and oppression. He said the decision made by the Pendleton Historic Preservation Commission, the body responsible for the decision to preserve the stamps, showed “implicit bias at best” and the shortfalls of having an all-white body.

“The oppression of BIPOC and marginalized communities is about equity and equality that has been taken from them essentially since Columbus got lost trying to discover America through a spice route,” he said.

The stamps are relics from the city of Pendleton’s pre-World War II era, when the streets used different naming conventions. Sidewalk stamps can be found all over the older parts of the city, but the Byers area seems to be the only part of town where the old street names referenced Confederate figures like Davis, Robert E. Lee and Stonewall Jackson.

Kate Dimon is the vice chair of the historic preservation commission, a four-person body that is a part of city’s web of committees.

While the city ordered new stamps that could be used to replace the Davis stamp that was broken, she was critical of the vandalism and continued to defend the commission’s decision to preserve it.

Dimon said she and the rest of the commission want to refer the issue to the council so they can decide what to do with the stamps long term.

But Mayor John Turner said he’s not aware of the council putting it on a future agenda, although he was also critical of what Walker did to the stamp.

“I find it rather disturbing, almost sinister, when people try to rewrite history,” he said, adding that preserving the stamps doesn’t mean the city is promoting the Confederacy.

Walker said he’s been forthright with authorities about his actions and he plans to take a similar approach when he appears in court in December.

Just a week earlier, Walker had been a candidate for appointment to a vacant seat on the city council. Walker didn’t get the appointment, but he said he’s actually glad that he didn’t because it will allow him to act more freely than he would if he were a public official.

PENDLETON — As much as Southeast Byers Avenue is changing, one key feature is staying the same.

Joshua Walker sounds like a immature whining 4 year old. They should throw the book at him for damaging property that wasn't his !