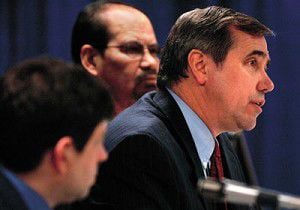 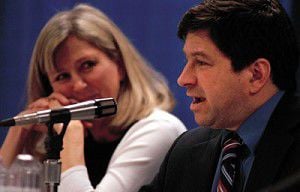 Now that the presidential debates have turned increasingly acrimonius,

What they got instead was a surprisingly civil presentation from the

the incumbent Republican senator from Pendleton - and even those shots

The first Democratic debate, which was sponsored by the East Oregonian

and included a panel of reporters and editors asking the questions,

The debate brought a strong response from the community. As 5:30 p.m. -

the start time for the forum - neared, convention center personnel had

chairs. The room was packed to the brim with people of all ages ready

to hear what candidates had to say.

Four candidates appeared for the hour-long forum at the Pendleton

Convention Center Tuesday evening. Each, it seemed, had aspects he or

she wanted to be sure voters heard.

background from his upbringing in Myrtle Creek, while also hitting on

topics such as health care, veterans and keeping working-wage jobs in

"We need a senator who looks at the world the way you and I do,"

lens of the working family. ... The issues I want to fight for are the

David Loera, a naturalized American who was born in Mexico, spoke from

his background, citing his time living in Nyssa - where he graduated

from high school - as his introduction to Eastern Oregon.

Cindy Neville of Eugene spoke strongly against the War in Iraq.

"It is the one issue that is an absolute log jam," she said in her

Steve Novick, a Portland lawyer, seemed to show himself as opposing

many of the policies he saw Sen. Gordon Smith, R-Ore., standing for.

Smith was a major issue for all four Democrats.

Though the Pendleton native wasn't at the forum, his issues were front

and center in the candidates' answers.

"Sen. Smith is a good man, but I have problems with his voting record

and I don't think his votes have helped Eastern Oregon," Novick said.

He chastised Smith for not backing health care plans, for increasing

"I believe that Sen. Smith is connected to the real daily needs of the

people," Neville said. "But I do not think he has been open to putting

his strong effort into making sure Oregon is getting what it needs."

Some questions posed by the EO panel were specific to the region, such

as those addressing drawing water from the Columbia and working with

water from the Columbia in the winter ... and find ways to do

have to start thinking about that given global warming."

and farming. He suggested drawing water during high-flow times and

storing it or recharging aquifers. He also suggested getting federal

funding to repair pipes rather than using ditches.

consideration in policies. They also commended Smith for his work with

the health of streams and salmon.

"But many of the issues on reservations are, in fact, the same issues

we face in all of our communities," he said. "A family's aspiring to

have good family wage jobs, a family's aspiring to have health care, of

Novick made special mention of the Confederated Tribes of the Umatilla

"Preserving the culture of the tribes is like the importance of

preserving the culture of rural Oregon, which is different from urban

Among other major national issues were health care, education and the

When it came to Medicare, candidates agreed more funding was needed to

their patients," Merkley said. "It doesn't matter what your plan says

on paper if you can't get the services available."

Neville said she believed the program was a good idea, but it was just

wired wrong. She wanted to see support for struggling schools rather

than pursuing other careers.

attitude children have toward teachers," he said. "They consider them

as people who are wise."

providing a well-rounded program that stimulates the imagination and

creativity of our children," Merkley said. "And it's taking money away

from schools that most need the money to succeed. In that sense its a

perverse attack on the success of our schools."

privatization of schools, saying when public schools failed, there

would be a call for private vouchers.

"They never thought this was going to work," he said. "The idea was to

privatize education like they've privatized much of the Iraq war."

When asked what policy they support in Iraq, all candidates said they

want to get troops out.

Novick said the U.S. needs to get out but be ready for the consequences.

likely continue," he said. He also said the U.S. needed to make sure it

worked with other countries in the region to achieve stability.