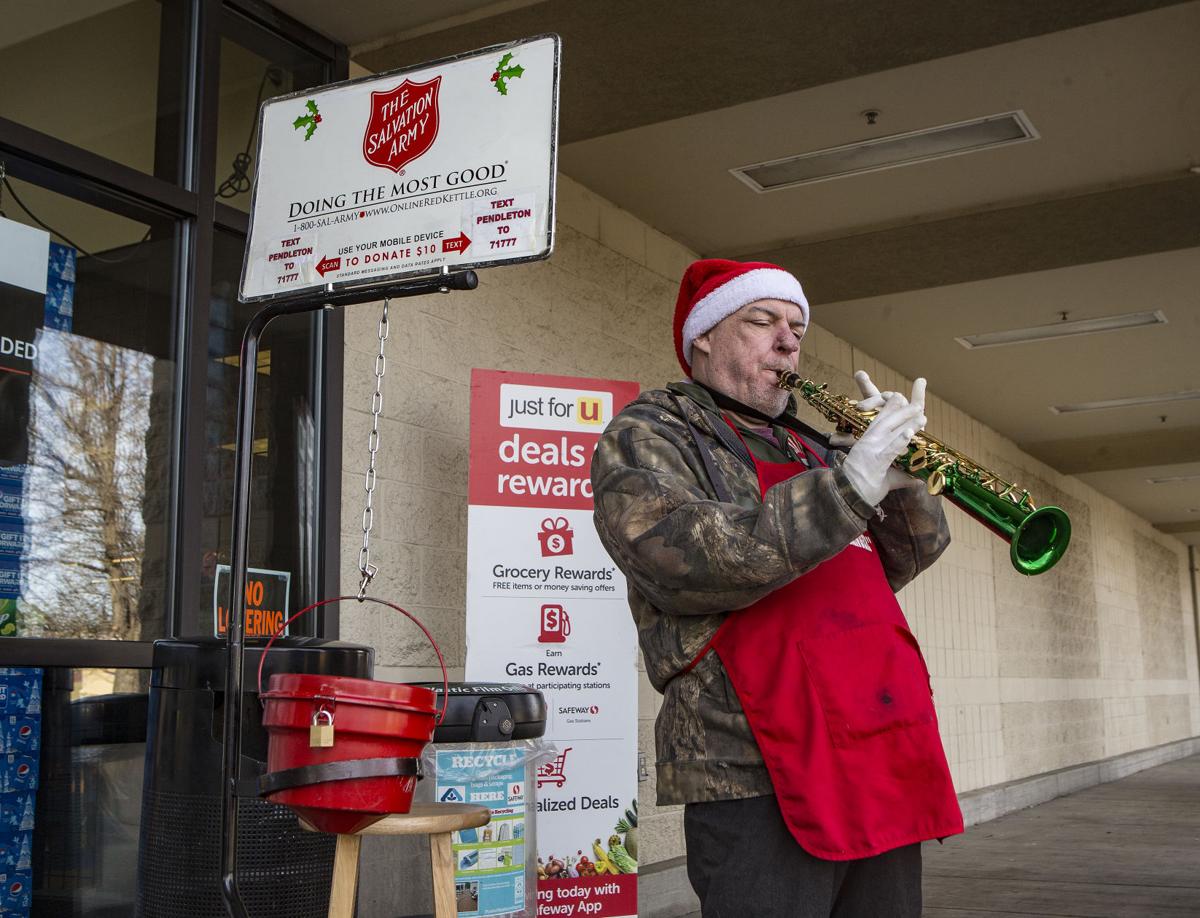 George Isenhart performs on his soprano saxophone while taking donations for The Salvation Army outside of the Safeway in Pendleton on Wednesday. 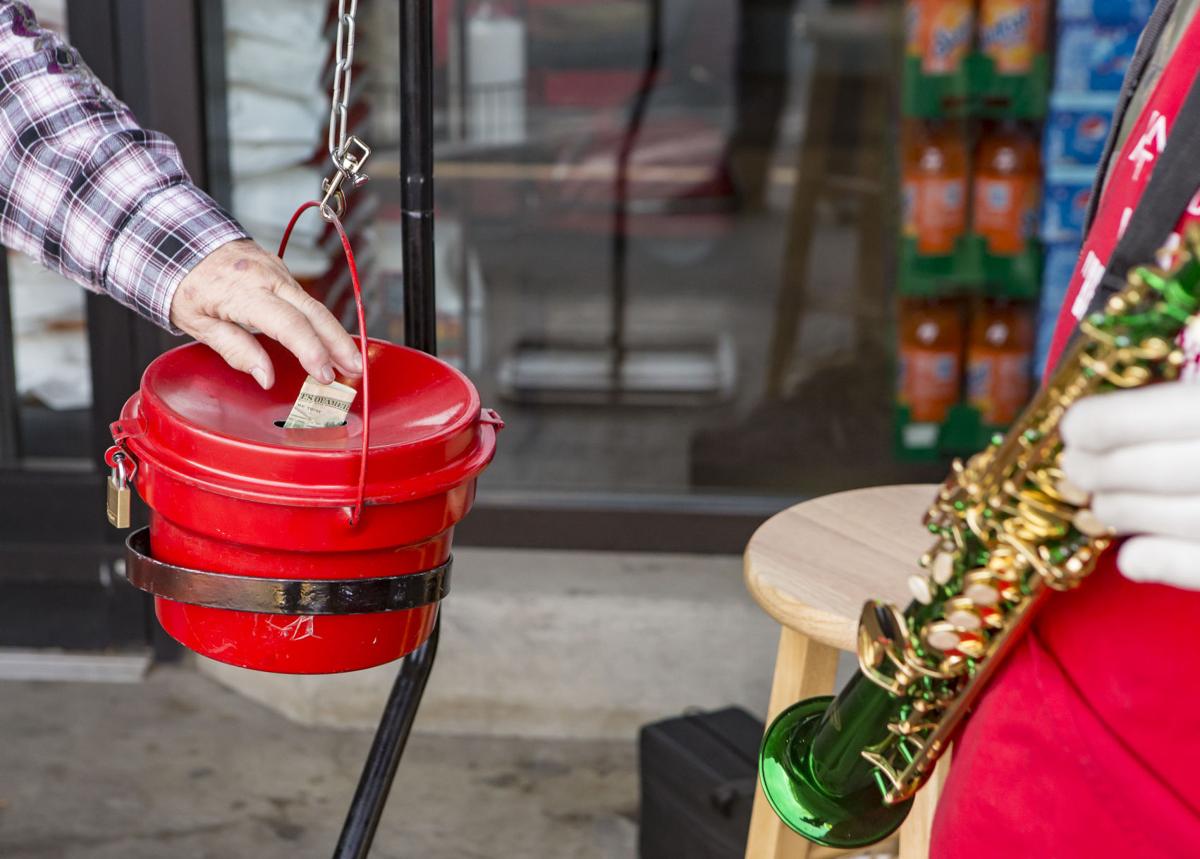 A shopper deposits money into a Salvation Army donation bucket outside of the Safeway in Pendleton on Dec. 4, 2019.

George Isenhart performs on his soprano saxophone while taking donations for The Salvation Army outside of the Safeway in Pendleton on Wednesday.

A shopper deposits money into a Salvation Army donation bucket outside of the Safeway in Pendleton on Dec. 4, 2019.

PENDLETON — The holiday season typically means shoppers are greeted with the sound of bells ringing as volunteers man the familiar red kettles of the Salvation Army.

However, in Pendleton on Wednesday the sound of George Isenhart’s soprano saxophone could be heard wafting across the parking lot at the Safeway. Isenhart has been a soldier with the the Salvation Army since the mid-1980s, when he was a young father looking for work in Nampa, Idaho.

“I felt so grateful for everything they did to help me find work,” said Isenhart. “Anything I can do for the Salvation Army, I’d love to do.”

After moving to Pendleton in 2016, Isenhart reconnected with the Salvation Army earlier this year and wanted to assist in this year’s kettle campaign. Maj. DeWayne Halstad said that performances like Isenhart’s attract attention and help raise more money than conventional bell ringing.

A study by personal finance website WalletHub found that Oregon was the fourth most charitable state behind Minnesota, Utah and Maryland, and led the country in “volunteering and service” despite falling to 37th in “charitable giving.” The WalletHub study examined data from “19 key indicators of charitable behavior” to rank the states. Indicators included metrics on volunteer hours per capita, the share of income donated and share of sheltered homeless among several others.

As the ringing of bells and familiar red kettles return to stores throughout Umatilla County, the Salvation Army Pendleton Corps, which serves Umatilla County, is hoping to make the most of the shorter holiday shopping season.

Last year, the Salvation Army raised just over $50,000 in the county during the Red Kettle Campaign, however Halstad is hoping to push that number to $70,000 this year — despite six fewer days to do so.

“We want people to support us,” he said. “This is the one time of the year we are out looking for help.”

As of Wednesday afternoon, the kettles in Umatilla County had raised approximately $9,900 since Thanksgiving. The money raised through the campaign is used to fund the Salvation Army’s meal, family assistance and youth programs as well as case management and counseling services.

Halstad said in order to meet their goal, they are seeking volunteers to aid in bell ringing and shoppers to contribute to the campaign throughout the season. Halstad has been involved with kettle campaigns throughout the Pacific Northwest for 23 years and said while shoppers are generous, it is harder to find volunteers in the region.

“For some reason we seem to have a hard time finding bell ringers in Pendleton,” he said.

When volunteer staffing allows, there are bell ringers at Bi-Mart, Safeway and Walmart locations in both Pendleton and Hermiston for most of the day. Halstad said they typically have 15 to 20 volunteers as well as service groups that help to fill shifts at the stores. However, they are always seeking volunteers.

When the Salvation Army is unable to find volunteers they are forced to use paid employees for bell ringing, which cuts into profits.

“Whenever someone is willing to volunteer, we take that and go to employees as a last resort,” Halstad said.

Those wishing to volunteer as bell ringers should contact the Salvation Army Pendleton Corps at 541-276-3369. Volunteer applicants must pass a criminal background check.

A guide to holiday giving in Umatilla County

PENDLETON — ’Tis the season for giving, and Umatilla County residents have plenty of options to choose from if they want to make the holidays …