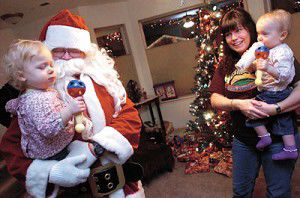 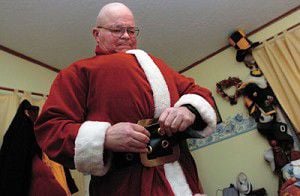 Hermiston resident Spike Piersol notches the belt on his Santa Claus suit while dressing up like the jolly old elf before heading out on Christmas Eve to spread some holiday cheer. <i>Staff photos by E.J. Harris</i>

Hermiston resident Spike Piersol notches the belt on his Santa Claus suit while dressing up like the jolly old elf before heading out on Christmas Eve to spread some holiday cheer. <i>Staff photos by E.J. Harris</i>

Piersol's son, Chris, took the reins of a red 2003 Mustang Mach I and chauffeured his father to spread Christmas cheer, making both planned and unplanned stops.

At the home of Tim and Danette Beinert, 16-month-old twins Michelle and Brooke initially didn't know what to think about Jolly St. Nick.

However, when Brittany, 10, was holding Brooke, the toddler reached out to Santa Spike.

"You want one?" Tim said with a laugh, as Piersol held Brooke.

Although Michelle initially began crying when she heard Piersol bellow, "Ho, ho, ho, Merry Christmas," she warmed up to him too, after being cajoled by her parents and 12-year-old sister, Kristen.

The girls opened brightly wrapped package to find a new pair of pjs.

"This is a tradition - pajamas in the evening, that way they aren't in their underwear in the morning," Danette said.

Even though the pajamas had a useful purpose, Brooke and Michelle were much more enthralled with colorful rattles they received.

"These are non-church toys," Danette said as the girls shook them with glee.

At the home of Louie and Cori Bonifer, the couple took numerous pictures, as 4-year-old Bryon slept through most of Piersol's visit.

The youngster cried briefly and then plopped face-down across his father's lap.

"We'll show him the pictures in the morning, so he can see what he missed," Cori said.

After giving Piersol a hug, Isaac got down to business.

"I want a motorcycle and a John Deere tractor," he said.

"A real one?" Piersol asked.

After shaking his head yes, Piersol asked if the youngster had plans to help his dad in the back forty.

"I want a back thing," Isaac clarified.

"Oh, you want a back hoe!" Santa Spike exclaimed.

Satisfied that Santa understood the desires of his heart, Isaac retreated to the kitchen.

"Merry Christmas buddy," Piersol said. And in the twinkle of an eye, Santa Spike was on his way to another house.

Driving into town, Chris nearly stopped on a dime when Spike told him to stop in front of a house.

Inside, a spread of food and people were everywhere.

Minton's great-grandsons, Jonah Wilcott, 5 and his brother, Grayson, 3, hugged each other upon seeing Santa Spike.

"Have you guys been good?" Piersol asked.

The brothers shook their heads yes.

"I saw Santa Claus," the younger Wilcott said about a dream he had the previous night.

"I just enjoy doing it," Piersol said. "It's just fun seeing the looks on kids' faces."

Piersol's been carrying on the tradition since his dad died around 17 years ago.

"We got it from Frank Wells," Piersol said. "When I was a little kid he used to come to our house on Christmas morning."

Piersol's late aunt, Mary Shaw, made his costume,. Spike added two dog collars with bells, that jingle-jangle with every step he takes.

An article published earlier this month in The Oregonian, said the average weight of a shopping mall Santa is 256 pounds.

"I must be a midget one then," Piersol said with a laugh.

Santa Spike adds a pillow to fill out his suit.

Although he may be light on the scales, Santa Spike is a jolly elf, spreading holiday cheer with a twinkle in his eye and a bright smile on his face.