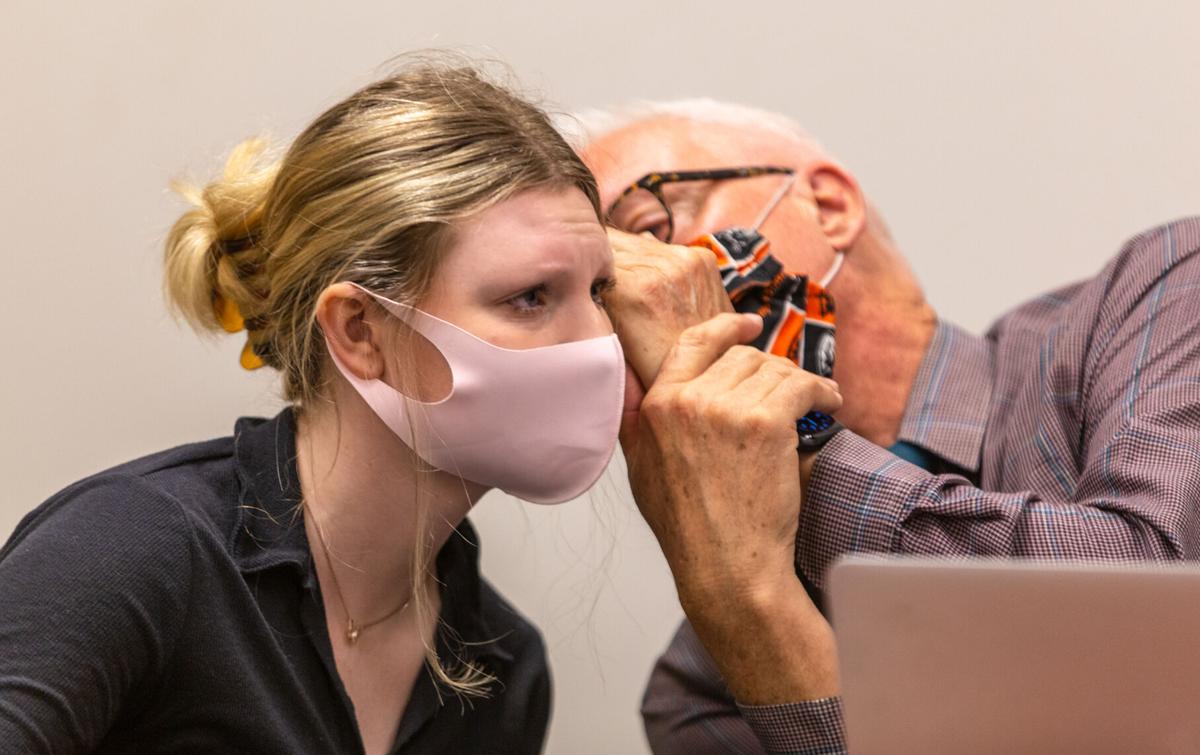 Retired Weston Middle School teacher John Bartron gives 17-year-old Bailey Munck some calming advice before the pair testified remotely for Senate Bill 649, known as Bailey’s Bill, which increases penalties for criminal sexual contact with an underage victim when the defendant is the victim’s teacher. Munck and Bartron testified from Pendleton on March 25, 2021. 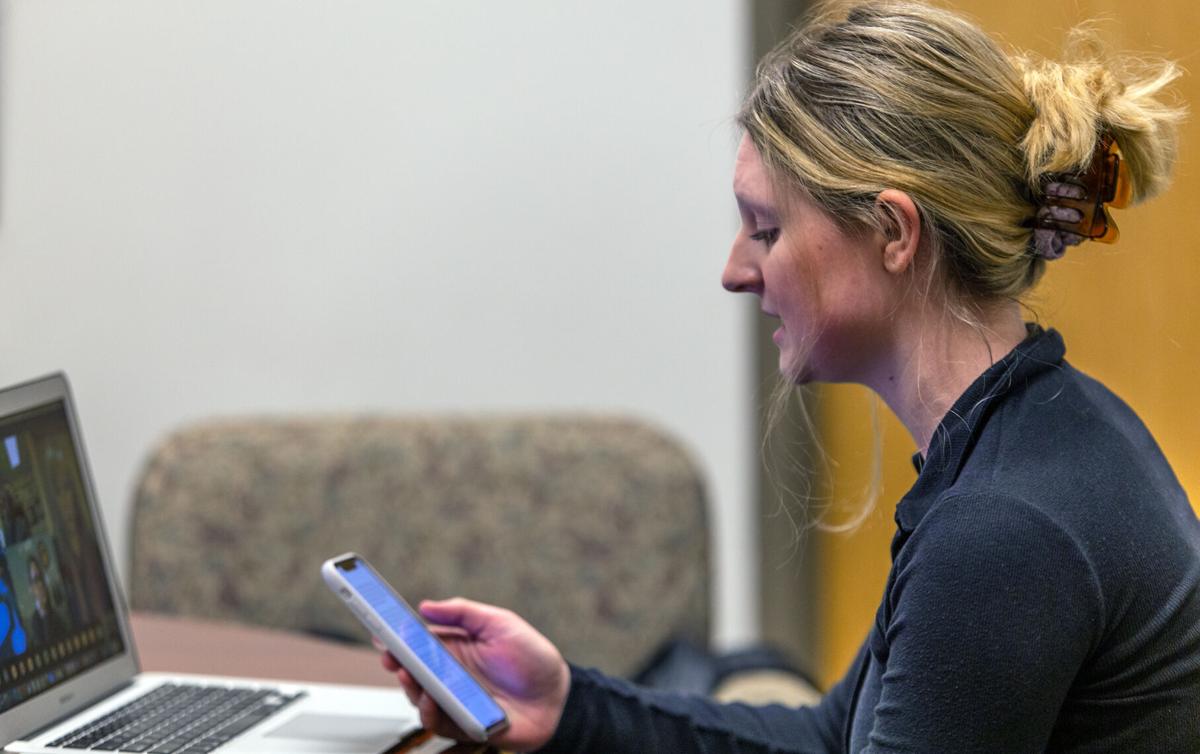 Seventeen-year-old Weston-McEwen senior Bailey Munck testifies remotely for Senate Bill 649, known as Bailey’s Bill, which increases penalties for criminal sexual contact with an underage victim when the defendant is the victim’s teacher. Munck testifed from Pendleton on March 25, 2021. 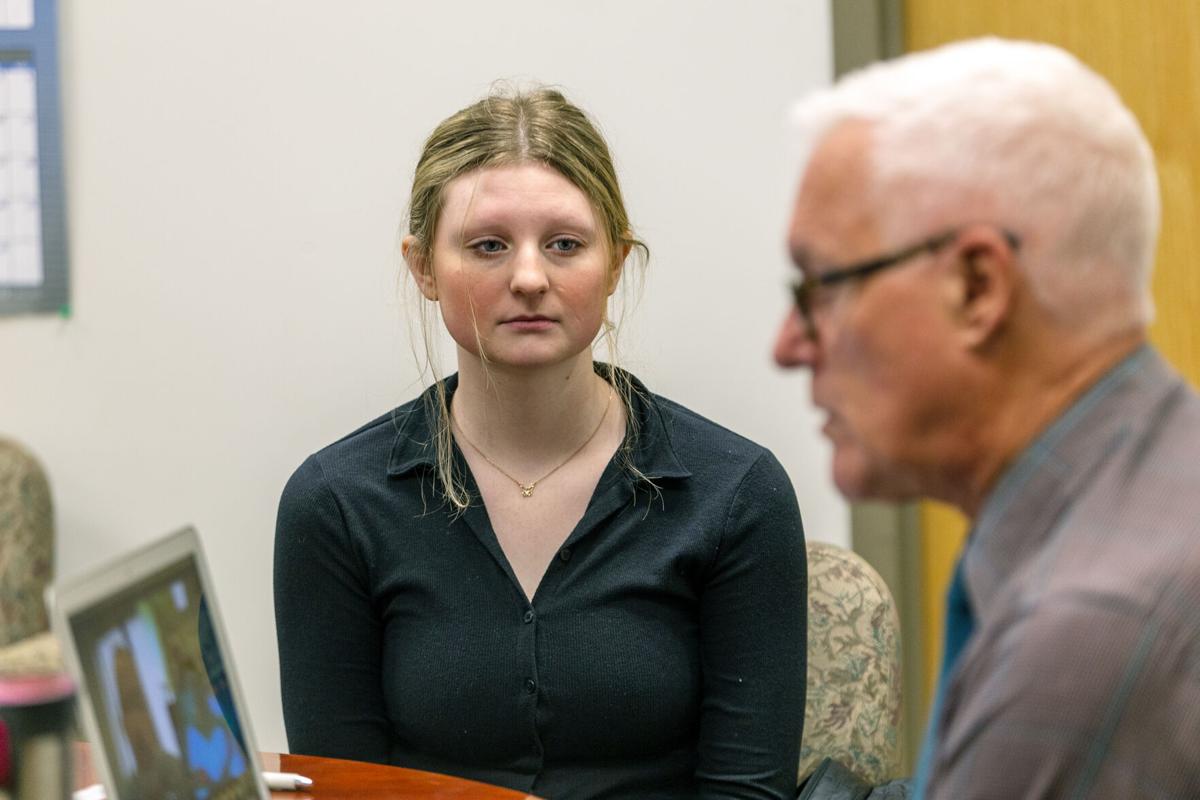 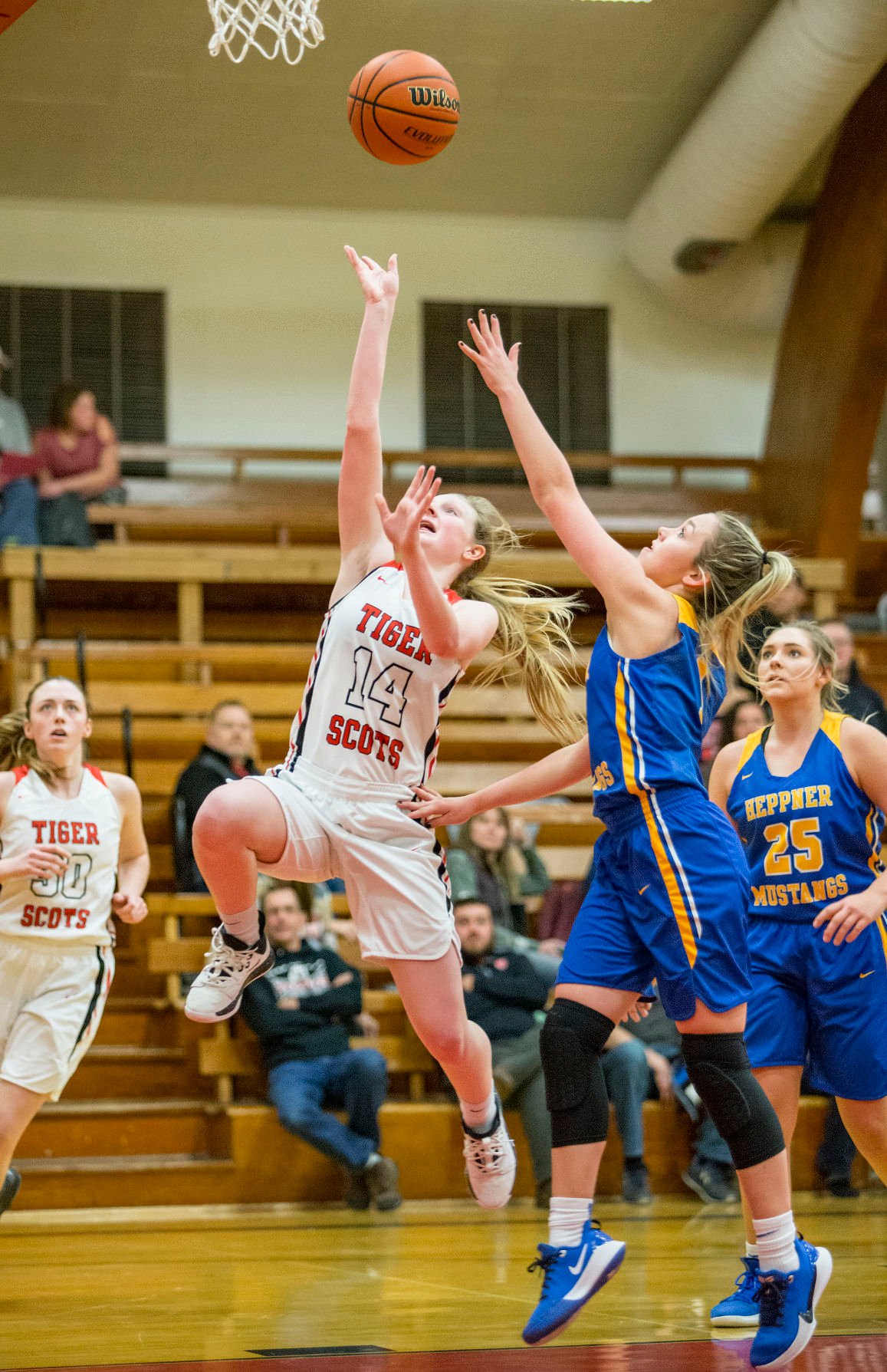 Weston-McEwen’s Bailey Munck (14) goes up for a shot against the Heppner Mustangs during a game in Athena on Jan. 3, 2020. 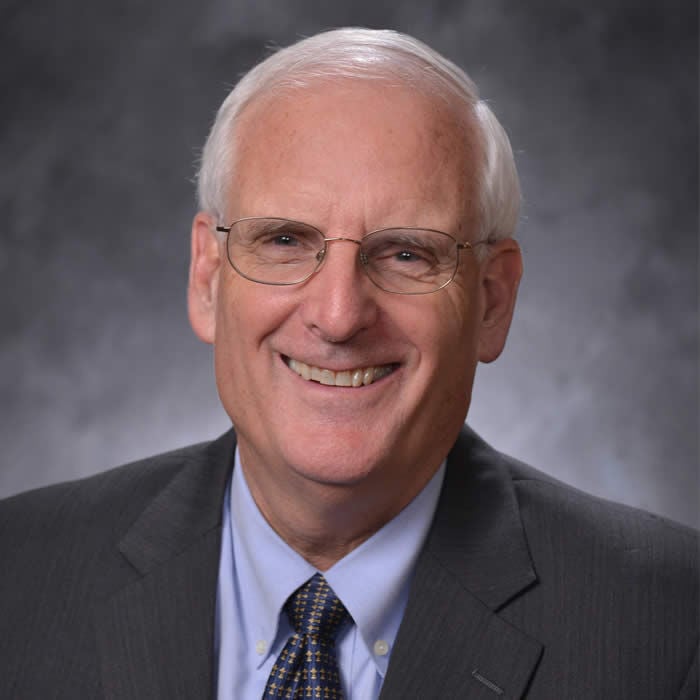 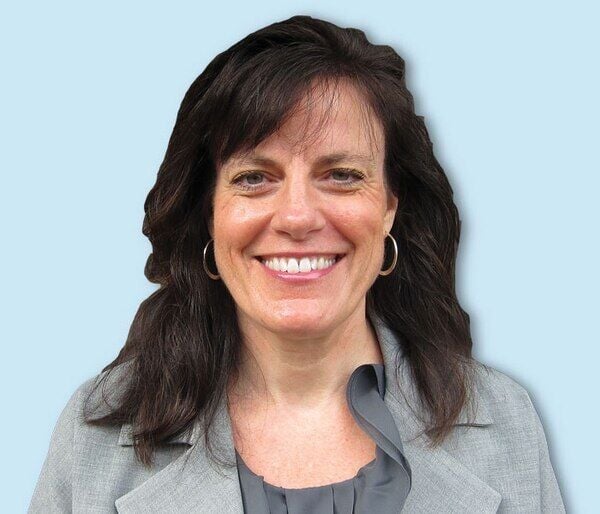 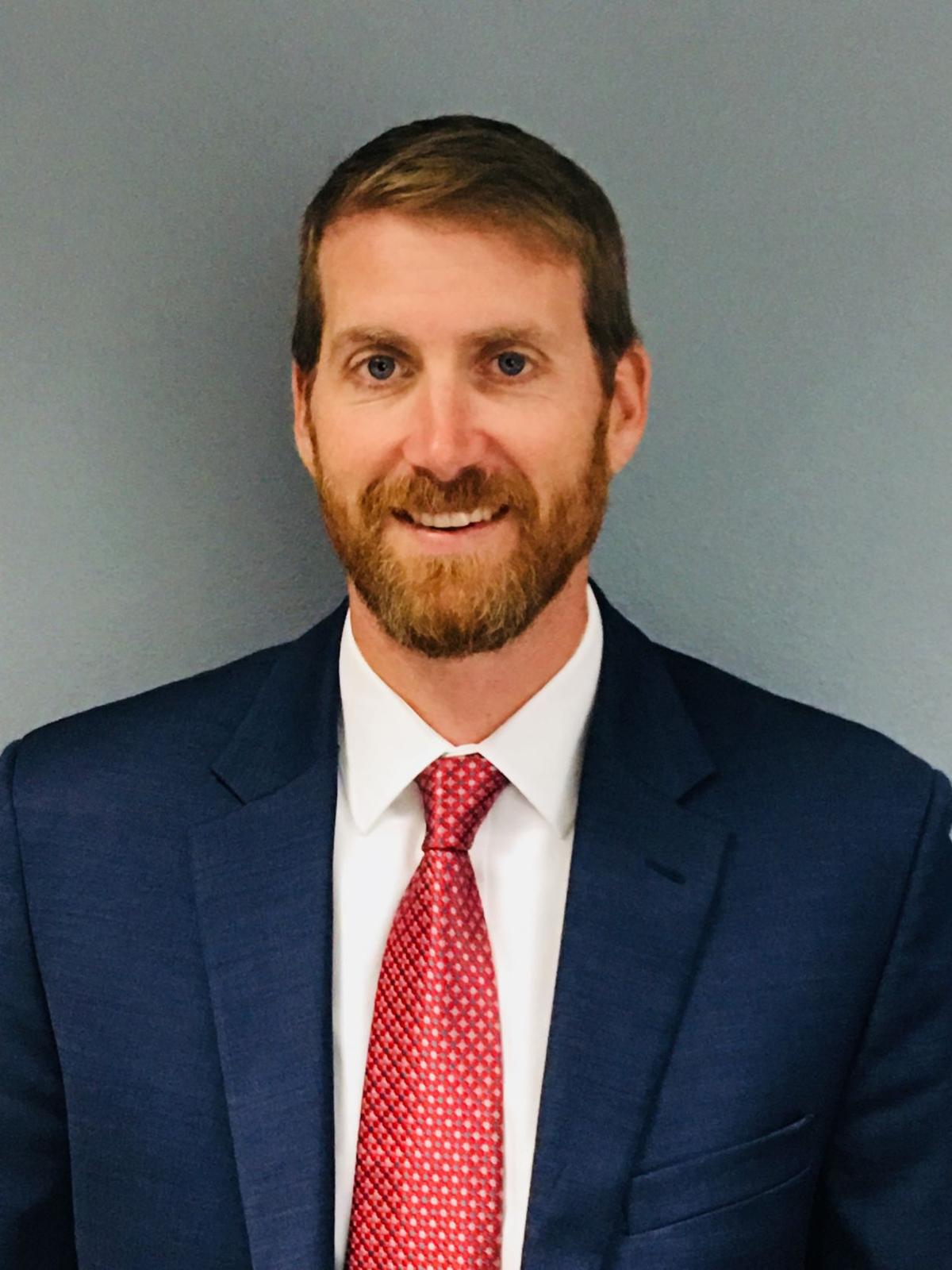 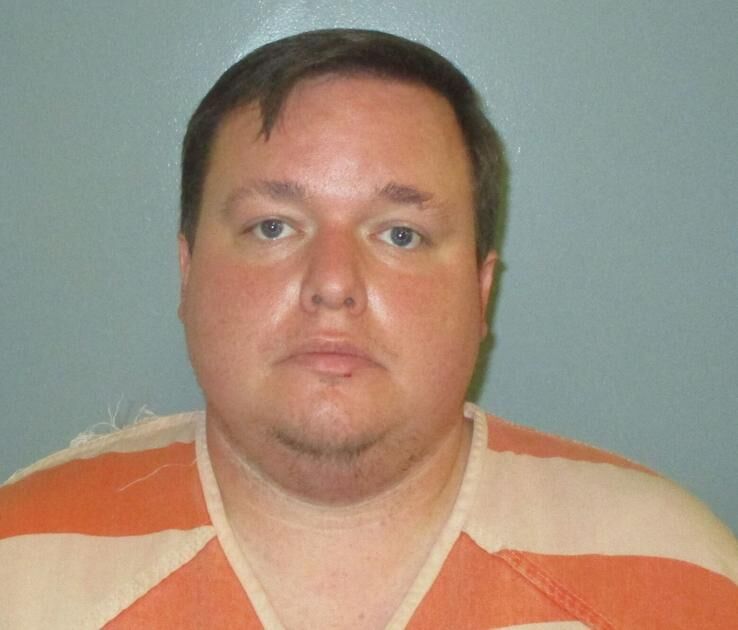 Retired Weston Middle School teacher John Bartron gives 17-year-old Bailey Munck some calming advice before the pair testified remotely for Senate Bill 649, known as Bailey’s Bill, which increases penalties for criminal sexual contact with an underage victim when the defendant is the victim’s teacher. Munck and Bartron testified from Pendleton on March 25, 2021.

Seventeen-year-old Weston-McEwen senior Bailey Munck testifies remotely for Senate Bill 649, known as Bailey’s Bill, which increases penalties for criminal sexual contact with an underage victim when the defendant is the victim’s teacher. Munck testifed from Pendleton on March 25, 2021.

Weston-McEwen’s Bailey Munck (14) goes up for a shot against the Heppner Mustangs during a game in Athena on Jan. 3, 2020.

In a few short minutes, the 17-year-old Weston-McEwen High School student would testify to the Senate judiciary committee of the Oregon Legislature via video chat. Munck fought her nerves as she thought about the intensely personal information she was about to share with total strangers.

The testimony on March 25 would be in support of “Bailey’s Bill,” named after her. Sponsored by Sen. Bill Hansell, R-Athena, and Sen. Kathleen Taylor, D-Milwaukie, the proposed legislation would increase penalties for criminal sexual contact with an underage victim if the defendant is the victim’s teacher. Currently, a coach convicted of sexual abuse (in the third degree) receives harsher penalties than a teacher who commits the exact same crime.

When committee chairman Sen. Floyd Prozanski in Salem invited Munck to speak, she unmuted the laptop and began.

“Good morning Chairman Prozanski and Vice-Chairman (Kim) Thatcher and committee members,” she began. “For the record, my name is Bailey Munck and I’m a senior at Weston-McEwen High School. In November of 2019 after the first state volleyball playoff game, I was sexually harassed by my English teacher.”

Munck’s appearance at the hearing came after some difficult months. Now 17, she likely wishes she could go back in time and give her 16-year-old self some heartfelt advice, preferably before her teacher inched closer and closer to student-teacher boundaries and finally stepped over them on Nov. 2, 2019, the day Munck and the other Weston-McEwen volleyball players shut out Coquille 3-0 in a first-round state playoff match on a road trip.

That night in their Roseburg hotel, popular teacher and scorekeeper Andrew DeYoe crossed that line. The next day on the bus, teammates pried the story from the obviously distressed Munck and persuaded her to tell an adult.

She did, but it would take six months for DeYoe, who taught freshman and sophomore English at the school, to be put on administrative leave. In the meantime, inappropriate behavior continued. It would be almost a year before DeYoe pled guilty to harassment that included sexual touching. DeYoe, 31, in the plea deal, forfeited his teaching license, terminated his housing lease in Athena and agreed to have no contact with minors who are not family members. He spent a night in the Umatilla County Jail and will serve five years probation. He wasn’t required to register as a sex offender.

If DeYoe had been a coach, he might have been convicted of a Class C felony, a crime that carries sentences up to five years in prison and a $125,000 fine. But DeYoe wasn’t technically a coach.

During the hearing, Munck urged the senators to amend existing law to include teachers.

“What is the significant difference between a teacher and a coach? Do coaches somehow carry more authority than a teacher might?” she asked the senators. “Coaches and teachers should be prosecuted equally as they both have responsibility for students’ safety and they both have positions of authority and power over their students and players.”

Others speaking in favor of the bill included Taylor and Hansell, Umatilla County District Attorney Dan Primus and retired Weston Middle School teacher, coach and athletic director John Bartron, who originally urged Hansell to consider sponsoring a bill that would fix the discrepancy.

Primus testified that sexual abuse in the third degree is a misdemeanor that involves “touching of an intimate part for sexual gratification.” If the defendant is a coach, the charge is elevated to sexual abuse in the second degree, which is a felony. He said the addition came during the 2009 legislative session. Legislators discussed including teachers, but ultimately didn’t.

Primus, whose office handled the prosecution, expressed frustration at not being able to charge DeYoe with a felony the same as a coach.

“The relationship between a teacher and a student is really no different than a coach and an athlete,” Primus said. “It should not be treated any differently.”

In preparing to testify, Primus said he reviewed reports in DeYoe’s file. One comment from a law enforcement officer’s interview with Munck struck him.

“He asked Bailey why she could tell a boy her age ‘no,’ but she was unable to tell the defendant ‘no,’” Primus said. “Bailey’s answer was simple and profound — because he had power and authority over her.”

During Hansell’s testimony, he pushed the committee to send the bill, which adds teachers to the existing Oregon statute, to the Senate floor for a vote.

“We as a state need to be consistent in protecting our vulnerable high school girls and boys with consistent sanctions, be the perpetrator a coach or a teacher,” Hansell said. “It’s a simple fix.”

Bartron sat in the East Oregonian conference room next to Munck, testifying after Hansell. He said he has known Bailey since she was small, both as a family friend and student. When he learned of the abuse, he felt gut shot.

“I was absolutely stunned, saddened and angered on so many levels,” Bartron said. “My greatest concern of course was Bailey.”

Bartron said he started researching Oregon’s sexual abuse statutes after learning more about how the case against DeYoe was proceeding.

“I was absolutely shocked to learn that within those statutes there appeared to be that loophole that held coaches to a higher consequence than a teacher,” he said. “I was beside myself.”

With the blessing of Bailey and her parents, he approached Hansell about creating a bill to fix the loophole. Hansell promised to look into it.

“One way I am apprised of needs is when people come to me and say this doesn’t make sense,” Hansell said after the hearing. “To be in a position where you can attempt to correct something is very rewarding and fulfilling for me.”

Munck has spent a lot of time thinking about what transpired with DeYoe. If she could have warned her younger self, she might have identified classic signs of grooming behavior in DeYoe.

“He just wanted to be the fun teacher,” she said several weeks ago during an East Oregonian interview. “DeYoe’s classroom was the hangout spot.”

She knows now she should have been more alarmed when DeYoe often texted her about non-school things, simply to say good morning or good night or ask what she was doing as late as 3 in the morning. Screen shots of texts bear this out. She would have avoided being alone with him in his classroom. During moments of inappropriate touching, she felt paralyzed. She’s stronger now.

“I sort of don’t associate myself with myself a year ago,” Munck said. “I feel like I’m a completely different person.”

Munck said she realized that she once assumed she could easily identify and avoid predators.

“I spent my life staying away from old men that I didn’t know,” she said. “Looking around and under my car before getting in. That protected me during my 16 years, but what didn’t was the knowledge of grooming by somebody that I know already.”

Munck said she doesn’t blame the justice system for not securing a harsher sentence for DeYoe and going for a plea deal that would keep the case from dragging on for months.

“Ultimately I think the assistant district attorney involved (Jaclyn Jenkins), she helped us settle the best situation,” Munck said. “There were just a lot of factors that I feel like people outside looking in just don’t see all that. They’re quick to judge the sentence, but that was really all we could do with it. It was a misdemeanor. You can’t do a lot with a misdemeanor. It was the best that could have happened.”

During the court hearings, the teen observed Jenkins with fascination. So taken was Munck that she has decided to study criminal justice in college and become a prosecutor like Jenkins.

Sen. Hansell said he is hopeful Bailey’s Bill will reach the Senate floor for a vote this session.

“Senate Bill 649 will close a loophole in Oregon statutes so that other daughters and their families will not have to endure what Bailey Munck and her family have had to go through.”