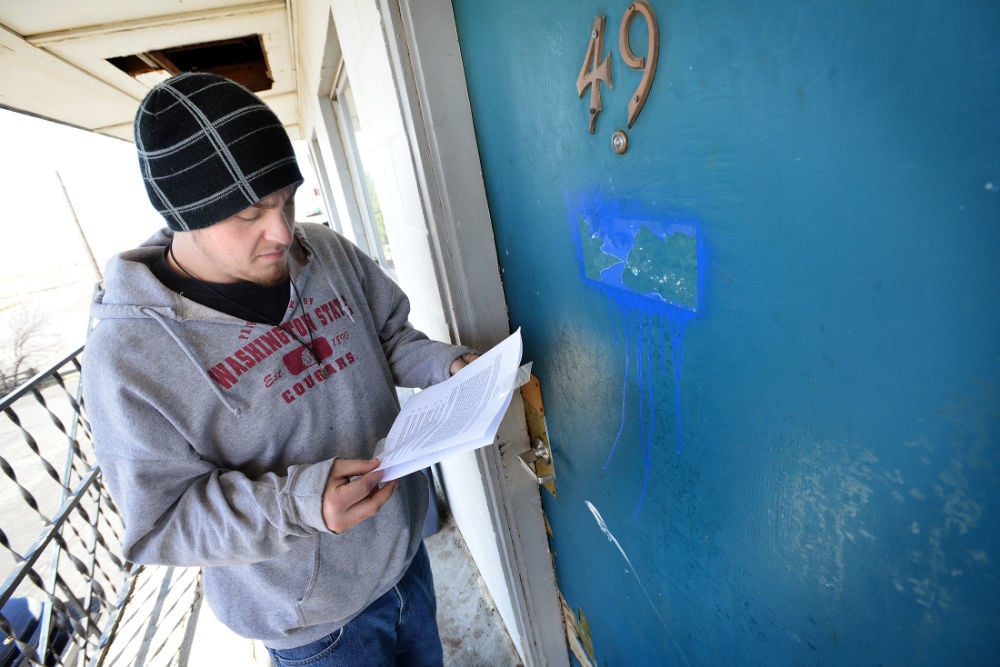 <p>Byron Baker looks at a notice the deputies with the Umatilla County Sheriff's Office placed on the door of his room Thursday at the Rodeo City Inn outside of Pendleton.</p> 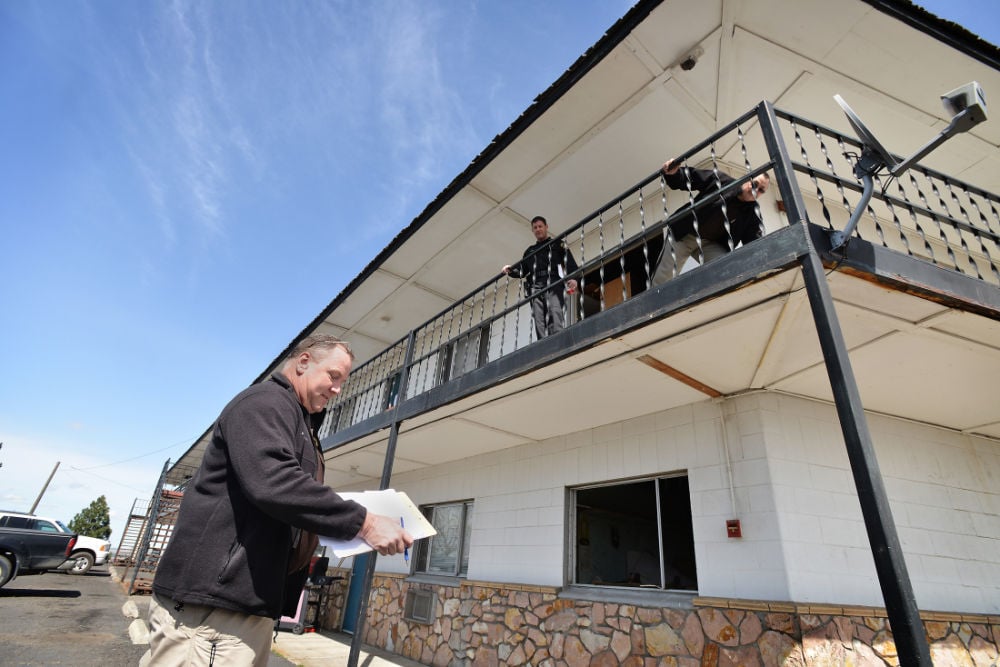 <p>Umatilla County Sheriff Terry Rowan, left, coordinates with deputies while serving notices on the residents at the Rodeo City Inn on Thursday outside of Pendleton.</p>

<p>Byron Baker looks at a notice the deputies with the Umatilla County Sheriff's Office placed on the door of his room Thursday at the Rodeo City Inn outside of Pendleton.</p>

<p>Umatilla County Sheriff Terry Rowan, left, coordinates with deputies while serving notices on the residents at the Rodeo City Inn on Thursday outside of Pendleton.</p>

Byron Baker pulled a notice off his door at the Rodeo City Inn and stared in consternation at the paper.

Umatilla County sheriffs deputies had just posted the notices on doors at the 52-room motel/apartment complex. The county can declare a place a crime property if any of 16 crimes  assault, harassment, disorderly conduct, theft and sexual abuse among them  occur there three or more times in a 90-day period.

The designation is the first step toward closure, though owners Raymond and Marcia Osias could stave off court proceedings by convincing county commissioners they can turn things around. That could be a tough sell, though.

The board of commissioners has the option of proceeding to court, said Lt. Glen Diehl of the sheriffs office. It can go to the point where the property is actually closed.

Baker, who has lived at the inn for a month, said the police arrive with regularity. He hears frequent fights and screaming and is hesitant to leave his room lest someone break in. There is constant drama, he said.

The cops are out here almost every day, Baker said. Its a hell hole.

Shawna Rundle lives at the inn with her family, which includes two young children and a mastiff. She said she is tired of the crime and the unsanitary conditions.

Its disgusting  its not a place to raise your kids, she said. It needs to be shut down.

The building has broken windows, peeling paint and sacks of garbage. Rundle said her apartment leaks, is moldy and has a non-working shower.

The notice, however, has less to do with sanitation and more to do with crime.

Manager Drew Osias, brother of owner Raymond Osias, said he works to evict the bad apples  those who cause trouble or fail to pay their rent. Despite the inns rough reputation, Osias said closing the place would lead to more people on the streets.

If they shut us down, theyll have a lot of people who have nowhere to go, he said.

Another tenant, who said she was Rae from Apartment 37, but wouldnt give her last name, said Osias does the best he can and often lets people live rent-free in exchange for work if they are broke.

Drew is a respectful man, she said. He puts up with people who otherwise would be on the street. He gives second chances. He cuts people breaks.

Umatilla County commissioners, however, may not cut Rodeo City a break. If commissioners dont enter into an agreement with the owners for abatement, Diehl said, the next step is for the county to file a complaint with the courts.