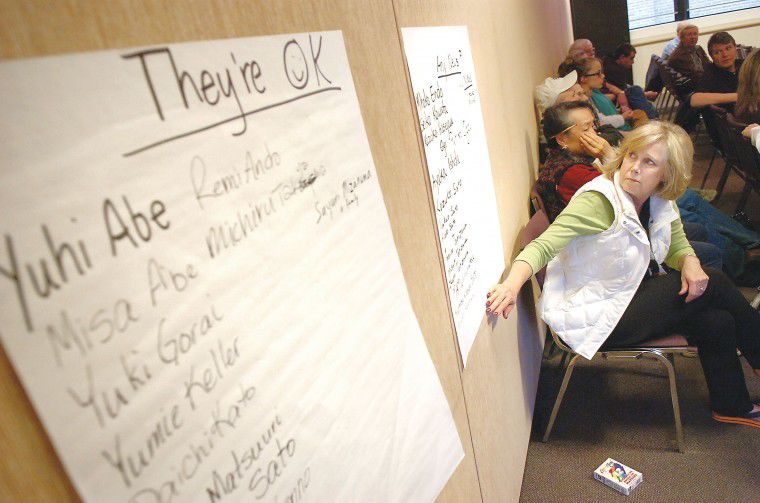 Carol Blanc looks at a list of Japanese exchange students, chaperones and host families from Pendleton’s sister city, Minamisoma, that was hit by Friday’s 9.0-magnitude earthquake and subsequent tsunami. An impromptu meeting of concerned citizens gathered at the Pendleton City Hall to discuss relief efforts for the city. 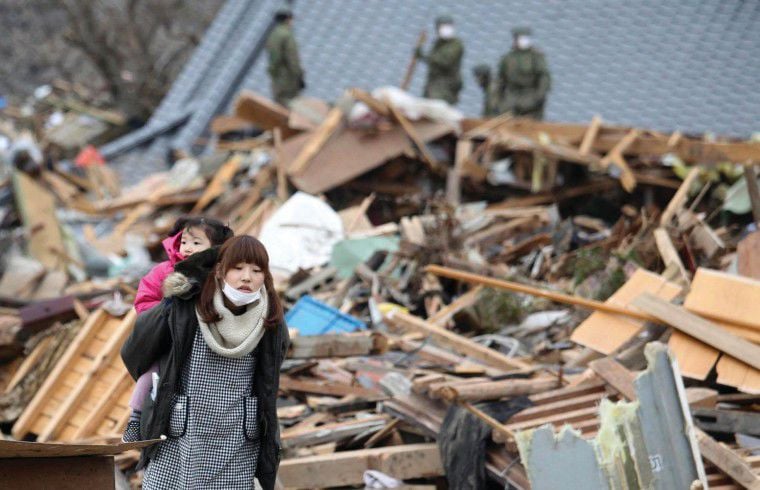 A woman carries a girl on her back Tuesday in a devastated area during a search operation in Ofunato, Iwate Prefecture, northern Japan.

Carol Blanc looks at a list of Japanese exchange students, chaperones and host families from Pendleton’s sister city, Minamisoma, that was hit by Friday’s 9.0-magnitude earthquake and subsequent tsunami. An impromptu meeting of concerned citizens gathered at the Pendleton City Hall to discuss relief efforts for the city.

A woman carries a girl on her back Tuesday in a devastated area during a search operation in Ofunato, Iwate Prefecture, northern Japan.

The questions was simple: What can we do to help Pendletons sister city of Minamisoma, which the recent earthquake and tsunami have devastated? The answers werent so direct.

Pendleton and Haramachi were the original sister cities and began exchanges with high school students more than a decade ago. That continued after Haramachi and two neighboring cities of Odaka and Kashima merged in 2006 to form Minamisoma.

The coastal community of almost 71,300 people is about 40 miles south of Sendai, the nearest major city to the earthquake. The tsunami wiped out large swaths of Minamisoma nearer the coastline, leaving behind only concrete foundations. City officials have since told news agencies there are 494 people dead in Minamisoma and about 2,200 people missing.

Monday, about two dozen Pendleton residents gathered in the Community Room at Pendleton City Hall to share what they knew had happened to people from Minamisoma and figure out what to do to help.

Participants made two lists of names: one from the Japanese exchange students they have heard from and another of the list of teachers, chaperones and host families that no one has received any word about.

Randy Gundlach, art teacher at Pendleton High School, spoke what several felt: We have to do something.

Just what, though, became the question. Pendleton Mayor Phillip Houk suggested families here could give surrogate homes to students who may have lost families there.

Someone suggested perhaps the Pendleton Foundation, the nonprofit that provides some funding for the exchange program, could devote money to help those in need. Others suggested sending goods. One person pointed out aid organizations, such as American Red Cross, prefer money to more easily fill needs on site.

For former host families and exchange alums, the social networking website Facebook has been the key to communicating with friends in Japan. As people revealedwho they had heard from, some hope seemed to replace feelings of distress. It seemed many of the students who have visited Pendleton are safe. While electricity and phones were out, the former students were using smart phones to access the Web.

Pete Wells, city attorney, created a Facebook group, Pendleton-Minamisoma, so people could share information at one place. Wells said he will keep it open for a couple of weeks so anyone can join, then will close it to only group members.

The emergency in Minamisoma is threatening the exchange program, but right now its too early to tell if Pendleton will send students this summer.

Over the next week, the group decided getting more information was best. They will meet again next Monday at 5:30 p.m. in the same room.