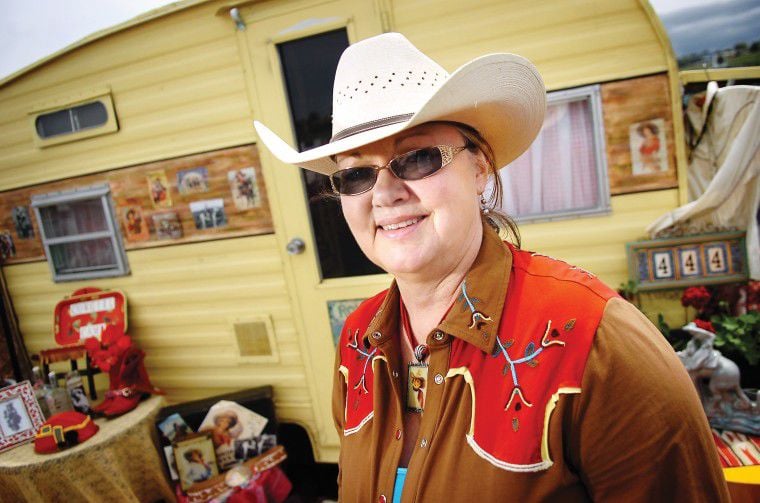 Juli Thorson of Troy, Idaho, poses for a photo in front of her rodeo-themed 1968 Oberlin trailer at the Sisters on the Fly camp during the Pendleton Cattle Barons Weekend on Saturday at the Pendleton Convention Center. 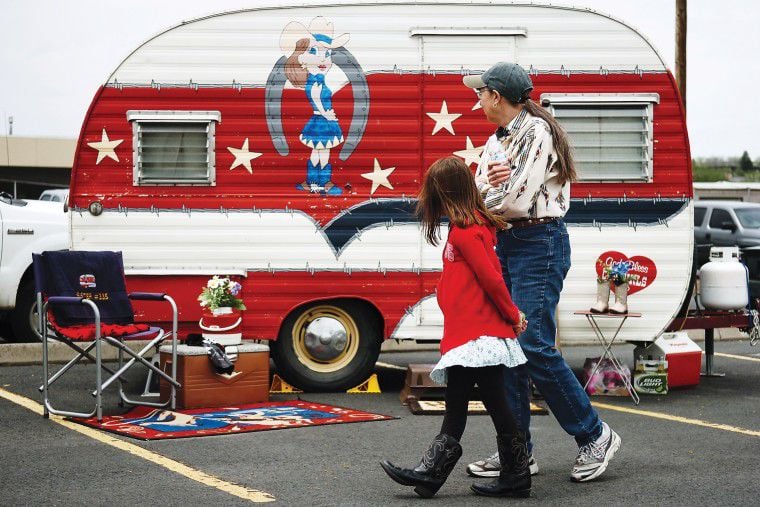 Kricket Nicholson of Pendleton and her granddaughter Jessica Brown, 8, of The Dalles look at a trailer owned by Carol Hill of Pocatello, Idaho.

Juli Thorson of Troy, Idaho, poses for a photo in front of her rodeo-themed 1968 Oberlin trailer at the Sisters on the Fly camp during the Pendleton Cattle Barons Weekend on Saturday at the Pendleton Convention Center.

Kricket Nicholson of Pendleton and her granddaughter Jessica Brown, 8, of The Dalles look at a trailer owned by Carol Hill of Pocatello, Idaho.

A cowgirl caravan rolled into town for Pendleton Cattle Barons Weekend. Nearly a dozen members of Sisters on the Fly set up a vintage trailer camp in the parking lot of the Pendleton Convention Center.

The group, whose motto is We have more fun than anyone, began when two siblings, Maurrie Sussman (Sister No. 1) and Becky Clarke (Sister No. 2), were drinking a glass of wine while adrift in a boat in Montana. The two were celebrating catching an 8-pound brown trout. The fishing trip was the catalyst for the sisters to invite others to share in their adventures.

Nickerson, Sister No. 23, helped organize the gathering in Pendleton. Nickerson said it was a great opportunity to spend some time with other sisters.

For those who are into the cowgirl stuff, this is a mecca, she said.

Members of the club often set up displays outside their trailer, including vintage items theyve found during trips.

Every trailer is kind of a rolling exhibit of souvenirs we find, said Thorson, Sister No. 444.

Thorson showed off her favorite find over the years  a small saddle. The saddle, she said, was a salesmans sample from the 1920s. The intricately designed leather saddle would be more suited for a large dog, rather than a horse.

Saddles were so big, the salesmen couldnt drag them all around, so saddle makers would make miniatures to show to people, she said.

Each trailer, Nickerson said, is as individualized as the owners.

Although the cowgirl theme is popular, Nickerson has seen everything from beach to patriotic themes. Linda Elliott of Florence has a trailer thats painted to look like a log cabin.

Every trailer has a story, Thorson said. Its like playing house for grown-up ladies.

The trailers are special to each woman, and when not on the road, Thorson keeps hers in storage on her ranch.

Ill turn the heat on and go visit it, she said about her 1968 Oberlin trailer.

Elliott had tried camping in tents and pop-up tent trailers before becoming Sister No. 1,736.

I was really struggling to go camping, she said.

A friend referred her to the Sisters on the Fly website. She purchased Ms. Dazy, a 1956 Shasta, last October.

It just needed a little sprucing up, she said. You can find them all over  sometimes they need a little work.

Elliott has taken several trips in her trailer, but Pendleton Cattle Barons Weekend marked her first trip with the sisterhood.

I know there was life before Ms. Dazy, but I dont know what it was, she said with a laugh.