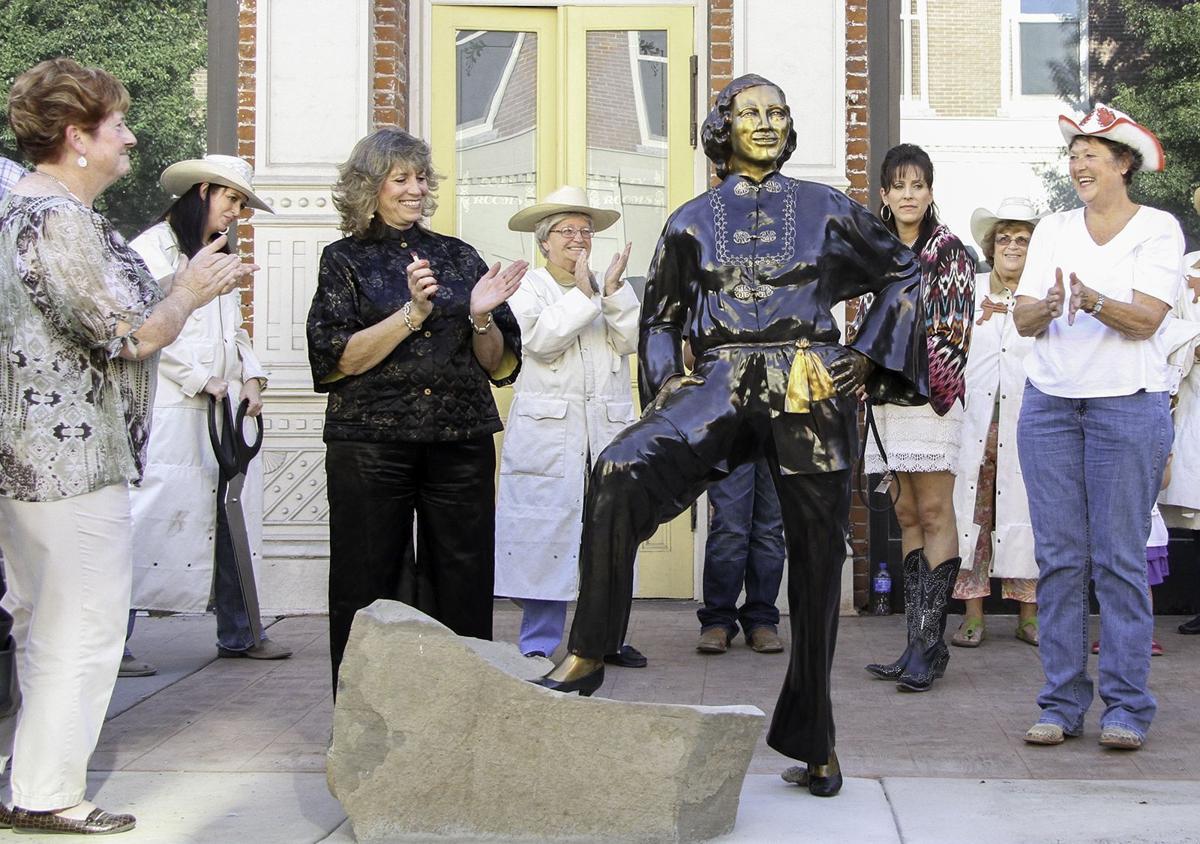 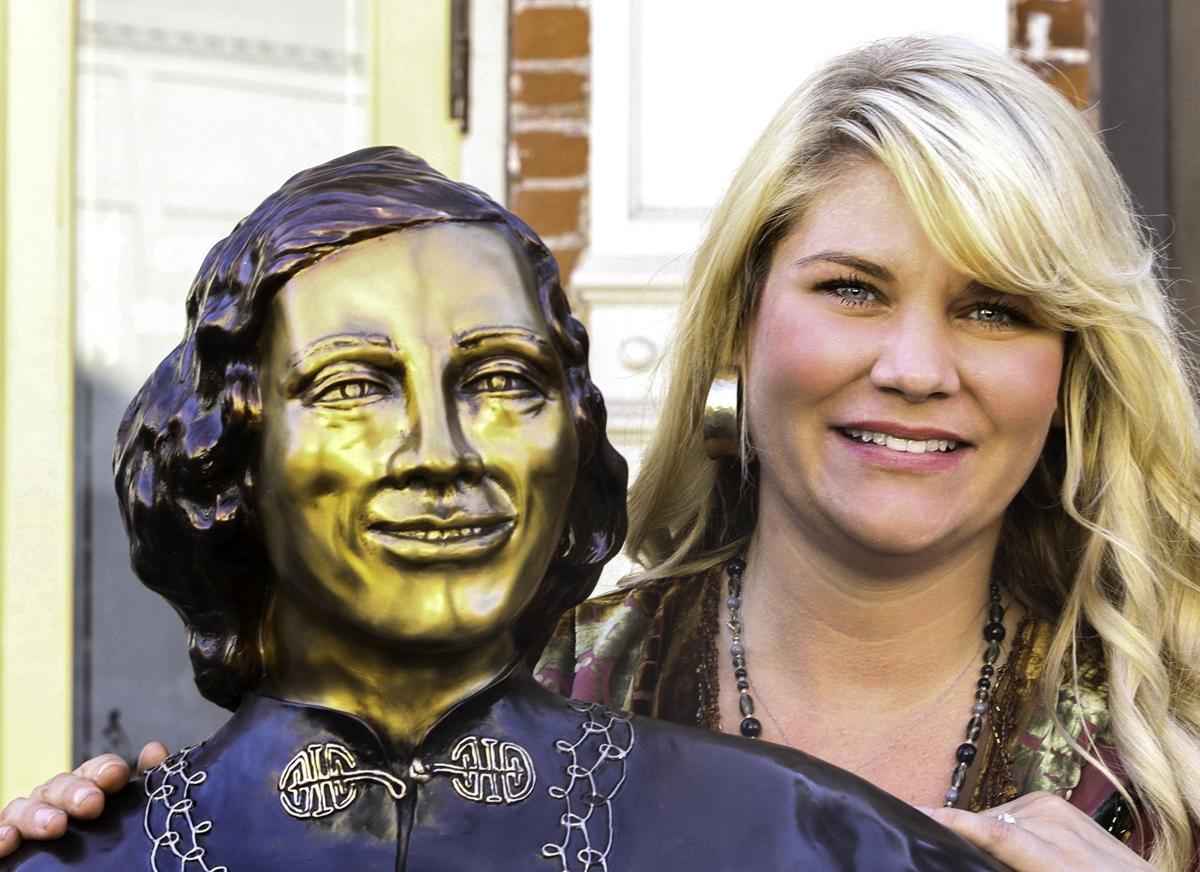 <p>Brooke McKay poses with the statue of madam Stella Darby that was unveiled Wednesday on Pendleton's Main Street. The bronze is dedicated to McKay's mother, Pam Severe, who was writing a book about Darby and was executive director of Pendleton Underground Tours.</p>

<p>Brooke McKay poses with the statue of madam Stella Darby that was unveiled Wednesday on Pendleton's Main Street. The bronze is dedicated to McKay's mother, Pam Severe, who was writing a book about Darby and was executive director of Pendleton Underground Tours.</p>

Pam Severe never wanted to gloss over Pendletons bawdy past.

The Pendleton Underground Tour director liked transparency and described bootlegging and prostitution as chapters in the towns colorful history. Severe, who died two years ago of cancer, would likely have felt giddy at Wednesdays unveiling of a statue of Stella Darby, the madam of the most popular of the towns 18 historical brothels  the Cozy Rooms.

The statue is dedicated to Severe, who was in the midst of penning a book about Darby when she lost her battle with non-Hodgkins lymphoma at age 59. Darbys bordello closed in 1967, but remains a stop in the Pendleton Underground Tour, a 90-minute journey into Pendletons past. After visiting a speakeasy, butchers shop, opium den and a Chinese laundry, tour groups climb 31 steps to the second-floor bordello where Darbys girls lived and worked.

On Wednesday evening, several dozen people, many in period costumes, gathered at the mid-block crossing between Dorian and Emigrant Avenues and clapped as the plastic covering was pulled off the bronze statue, revealing a metallic Darby in oriental lounge attire and high heels. A couple ladies of the night peeked out a second story window.

Severes daughter, Brooke McKay, circulated through the crowd, wearing a similar vintage costume and looking emotional. While some in town have criticized the notion of immortalizing a madam in bronze, McKay sees Darby as a much more complex character  someone who shared some important qualities with Severe.

They were both strong, independent, hard-working women, said McKay, the Underground Tours current director. My mom always had a connection with Stella.

Darby opened the Cozy Rooms at the age of 26 and never worked as a prostitute herself, said McKay. The madam was known as a smart businesswomen who had a heart for her girls.

She wanted to help the girls get out of the business  to educate them, teach them to be proper and ladylike and get them married, McKay said. She gave them things they wouldnt have gotten otherwise.

The benevolent Darby often donated food, money and clothing to the poor and served as a financial advisor to some of her clients.

She was very good with money, McKay said. She would take the gentlemens paychecks and dole them out over the month, so they wouldnt gamble them away.

Darby operated the bordello from 1928 to 1967. In 1953, a Presbyterian minister threatened to reveal patrons of the towns red light district by reading a list of names in church if the establishments didnt close. Most did. However, Darby laid low for a year, then ran her business in secret.

Artist Randy Gundlach fashioned the statue of Darby in the basement of his North Hill home, getting hints about her height (about 5-foot-four) and personality from two of Darbys nieces, who live in Walla Walla. He had only one photo.

All I had was a small original photo that was blown up to an 8x10, Gundlach said.

The sculptor watched the crowds reaction with interest. The retired Pendleton art teacher said he started crafting the figure from Styrofoam, clay, plaster and silicone and delivered a wax version to T.W. Bronze in Enterprise earlier this summer. He laughed as McKay quipped, Randys wife, Jan, was very happy to get rid of the other woman in the basement.

The Underground Tour paid $18,500 for the bronze and will retain ownership and assume liability for the statue, which is located near the Cozy Room front door.

Board member Fritz Hill said the bronze is an appropriate way to recognize both a colorful character in Pendletons history (Darby) and an important player in the towns recent past (Severe). While Severe didnt start the Underground Tour in 1989, he said, she embraced the business and made it one of Pendletons most popular destinations.

About 25,000 people a year go through that tour, Hill said. She kept it going and grew it. Its still here because of her.