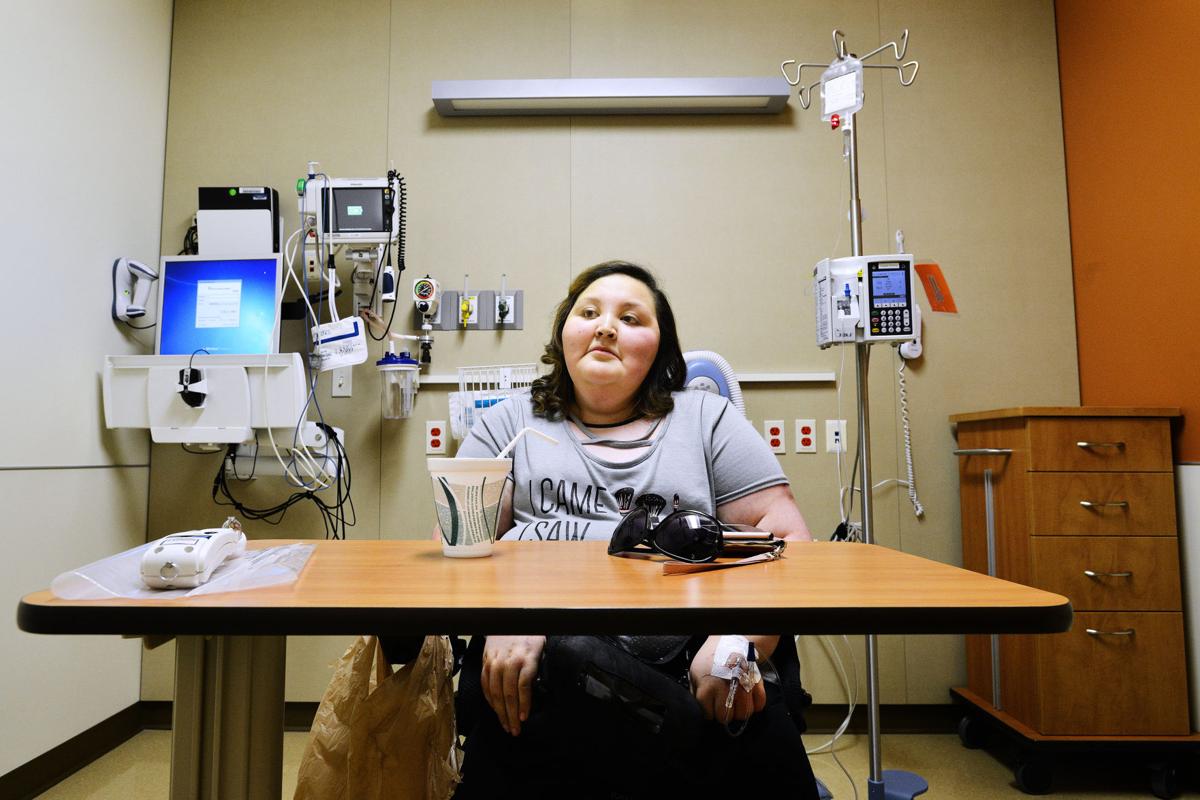 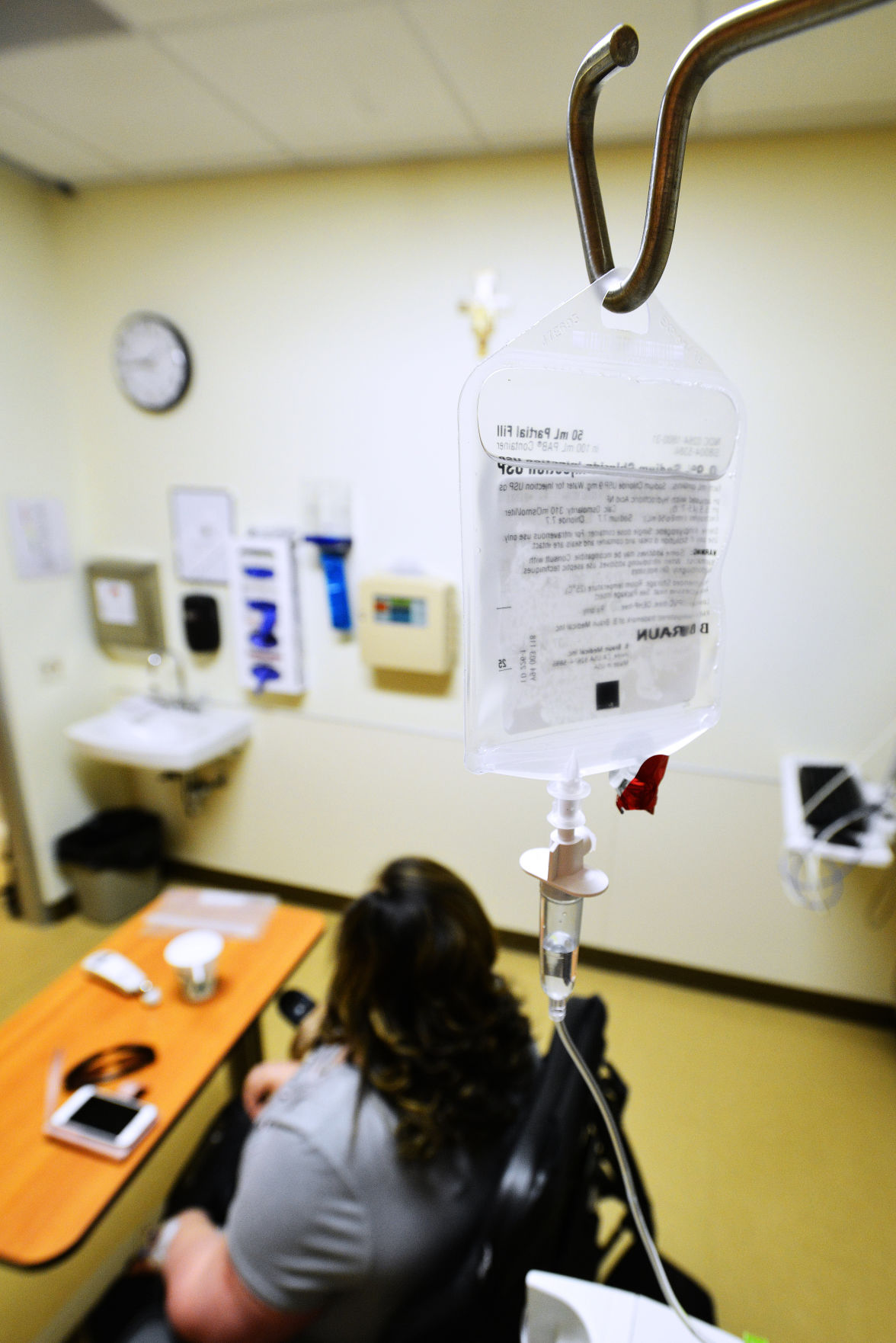 Exondys 51, known generically as eteplirsen, can run between $300,000 to $750,000 for a year-long course of treatment depending on the patient's weight. 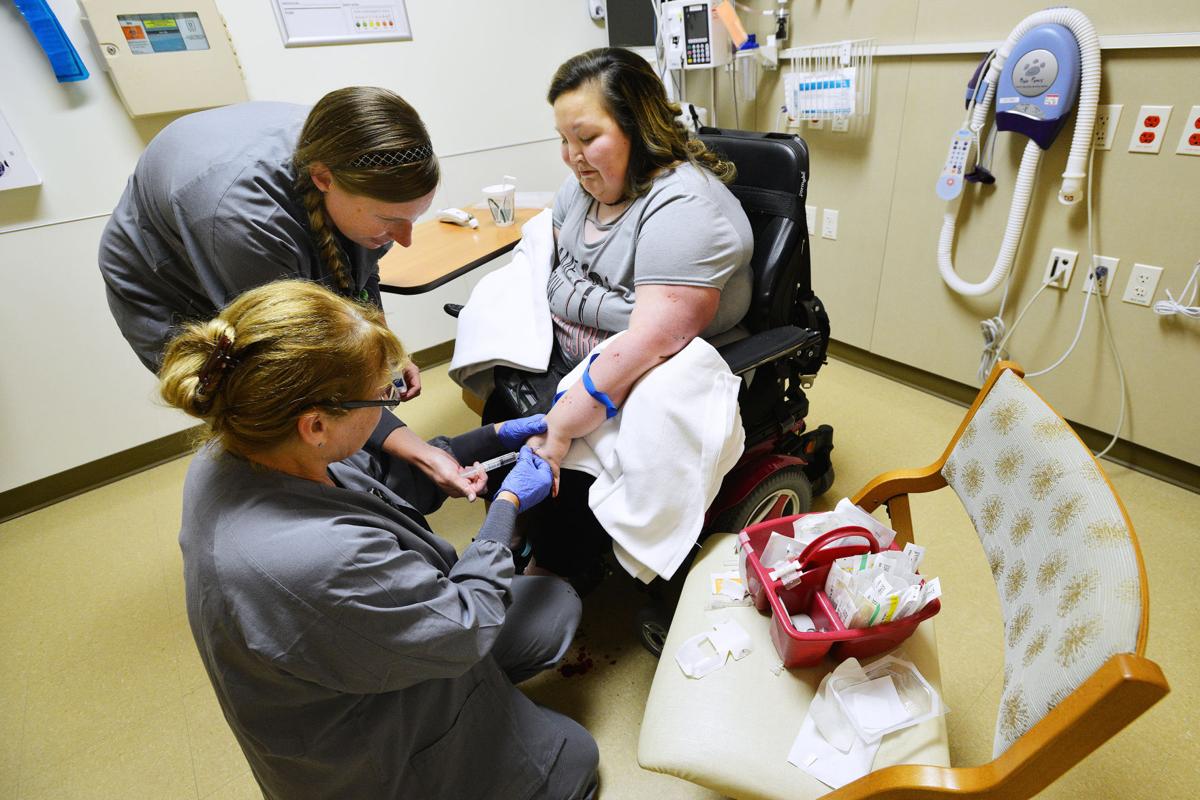 Exondys 51, known generically as eteplirsen, can run between $300,000 to $750,000 for a year-long course of treatment depending on the patient's weight.

The 27-year-old sat in her wheelchair with a rubber tourniquet around her forearm, looking calm as St. Anthony Hospital registered nurse Sally Bishop installed an IV port. Soon a drug called Exondys 51 sluiced into her veins.

Arroyo’s green eyes conveyed a mixture of elation and victory. She had waited for years to try this drug, known generically as eteplirsen. The Pendleton woman has a rare, muscle weakening disorder called Duchenne muscular dystrophy. Children with Duchenne are usually in wheelchairs by the time they’re teenagers and often die in their 20s and 30s.

The disorder strikes one out of every 3,500 boys. Arroyo estimates she is one of only 20-or-so females in the U.S. with Duchenne. Girls usually serve only as carriers, but Arroyo is what’s known as a manifesting carrier and she exhibits the same symptoms as her male counterparts.

As a young girl, her muscles progressively weakened, then she seemed to rally in her teenage years, warding off stiff muscles with exercise. Then in 2009, things changed when Arroyo fell, broke her back and was encased in a full-torso cast for six months. Her heart deteriorated rapidly during her time of inactivity. Suddenly wheelchair-bound, the Blue Mountain Community College student was terrified.

In 2013, a surgeon implanted a device in her heart’s left ventricle to help pump blood to the rest of her body. The surgery came just as Arroyo’s heart was on the verge of failing.

“They were thinking I had only a few days,” she said. “My heart was giving out.”

The device in her chest gave her more time, but provided only a stopgap.

Eteplirsen offered hope, though it was stuck in deep in the Food and Drug Administration drug trial process. In the winter of 2016, she flew to Washington, D.C., to testify to an FDA panel that the agency should give accelerated approval to the drug since people with Duchenne have no other option. The meeting, canceled after a snowstorm descended on the Capitol city, had to be rescheduled for April. Arroyo flew home. In April, the FDA heard testimony, then denied the request.

One morning last September, however, Arroyo awoke to a flurry of phone calls. The FDA had changed course and decided to approve the drug on a conditional basis.

“I guess they were listening,” Arroyo said. “Something finally clicked in their hearts.”

Just because a medication is approved doesn’t necessarily mean insurance companies will cover it, though. Eteplirsen is expensive. The price, based on a person’s weight, runs annually from $300,000 to around $750,000. Skeptics argue that the drug’s effectiveness hasn’t yet been determined. Arroyo, covered by the Oregon Health Plan, would have to wait to learn if she would get the drug.

Earlier this month, she traveled to Salem to testify in front of the Oregon Drug Utilization Review Board’s Pharmacy and Therapeutics Committee. Also speaking were Jamie Ambuehl (the mother of a toddler with Duchenne), three clinicians and a biologist.

“They gave us three minutes each,” she said. “I had to make every second count.”

She focused on making eye contact with each of the 20 panel members. She beseeched them to cover the drug and lift a proposed restriction that would bar Duchenne patients who can’t walk for at least six minutes from receiving the drug.

“I got a little emotional,” Arroyo said. “They were listening.”

At the end of the session, the committee lifted the walking requirement, pending approval by the state Health Evidence Review Commission. Arroyo later learned she would have access to the drug at least until the end of the year.

“Susie is a fighter,” said Pat Furlong, founder and CEO of Parent Project Muscular Dystrophy, an organization that advocates for Duchenne patients and their families. “She’s trailblazing for all of us.”

Furlong knows the pain of Duchenne. In 1984, doctors diagnosed her two sons, Christopher and Patrick, with the deadly disorder. Not much was known about cause or treatment then.

“My sons died at 15 and 17,” Furlong said. “They never had a good standard of care. Their physician said, ‘Go home and love them.’”

Furlong said her organization works to understand the genetic disorder and raise funds for research. The approval of eteplirsen brought excitement to the Duchenne community.

“Before this approval, there were no approved drugs especially for Duchenne. This is our first approval,” she said. “It’s hope.”

Arroyo certainly has hope. She personally knows some of the boys in the initial trials and has followed their progress.

“This is a progressive disease,” she said. “They haven’t gotten worse in five or six years – that’s huge.”

If the state decides not to pay for the drug next year, she plans to push on.