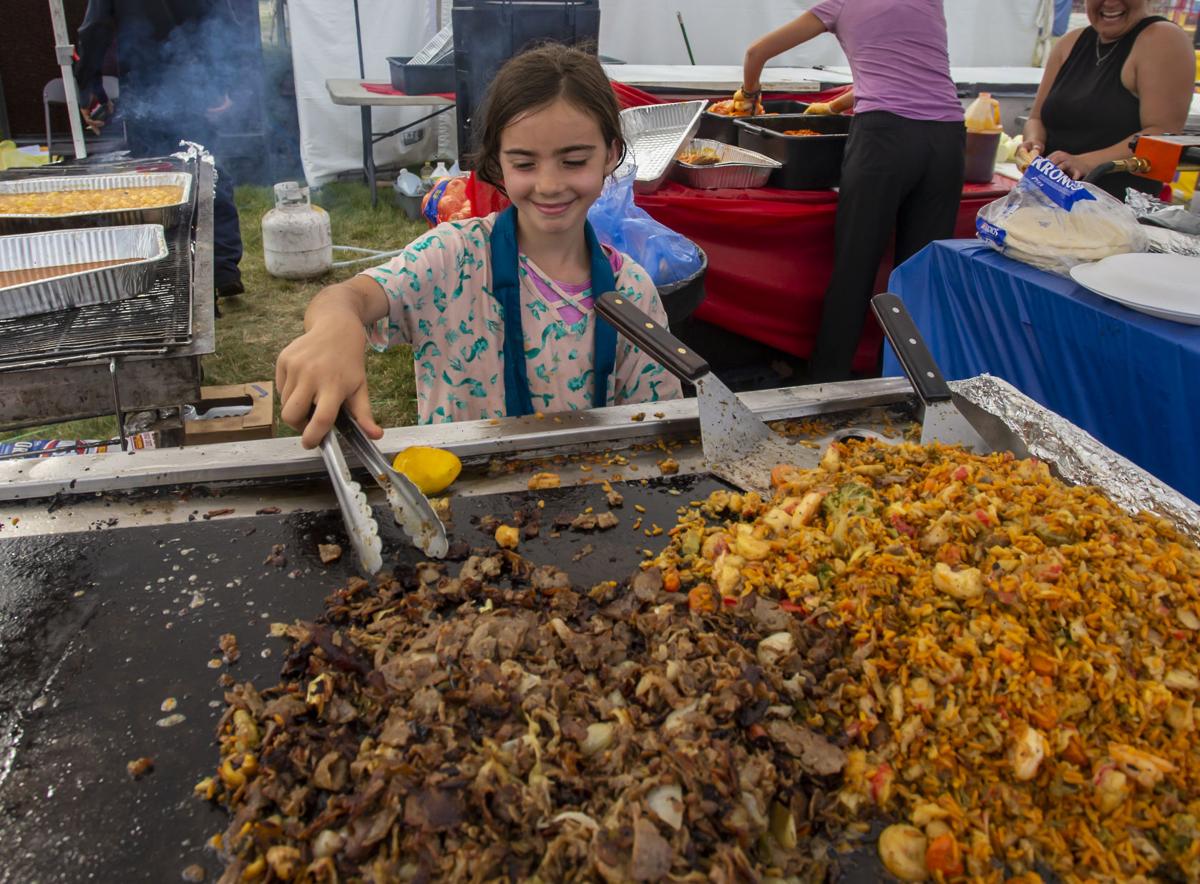 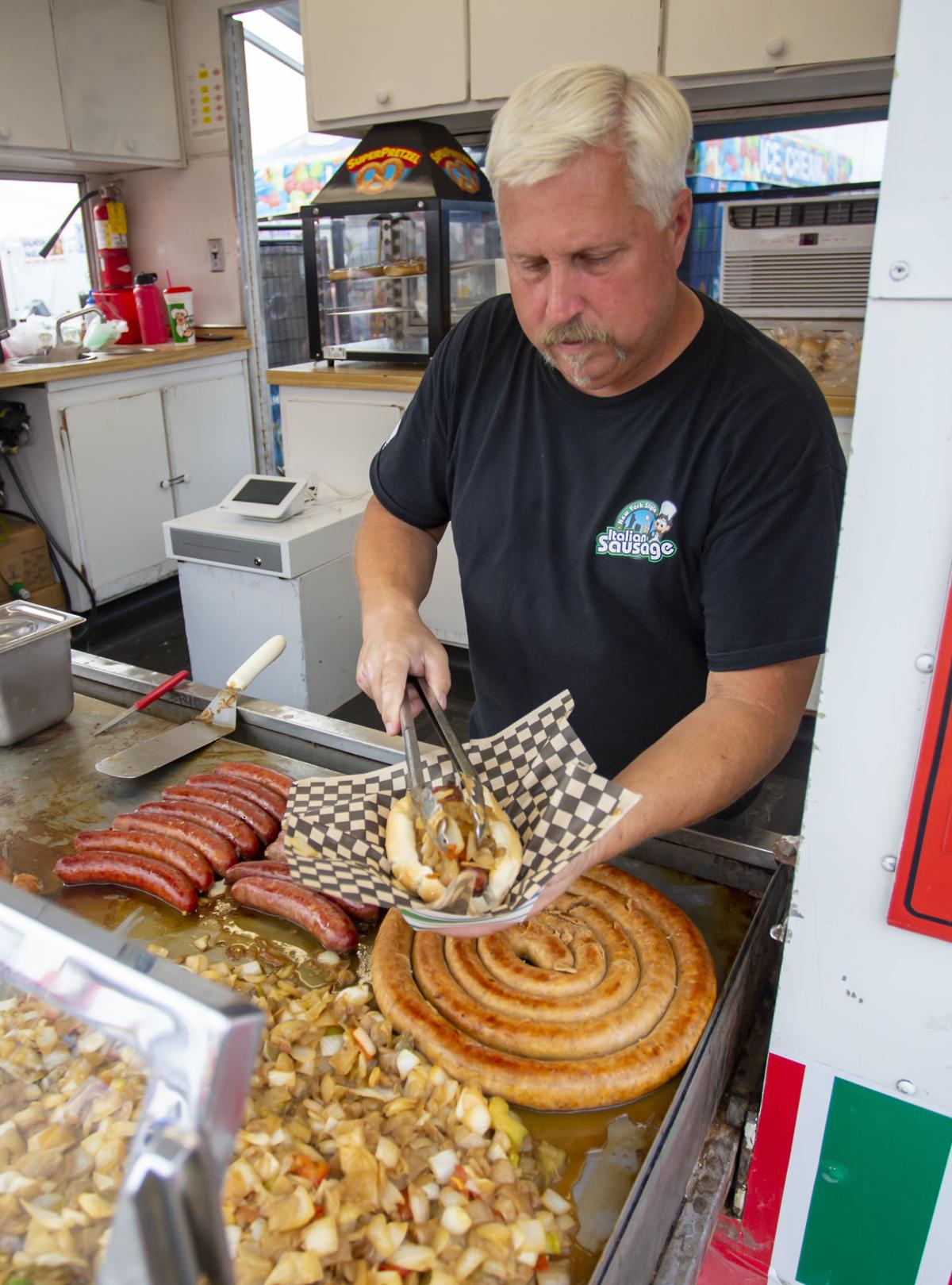 Dan Dirksen adds grilled onions to a sausage at a booth at the Umatilla County Fair Wednesday afternoon. 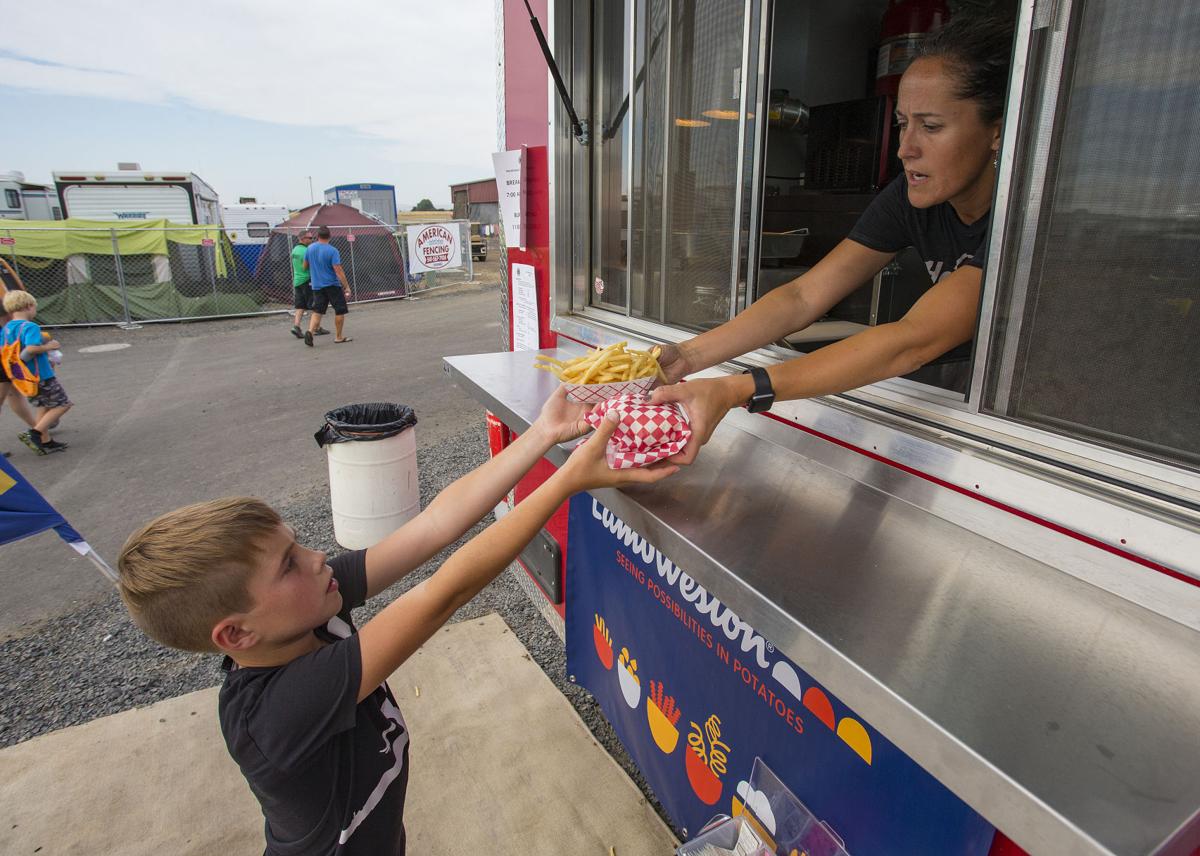 Tabor Mills receives a burger and fries from the kitchen at the Lions Club stand before delivering it to a customer at the Umatilla County Fair Wednesday afternoon. 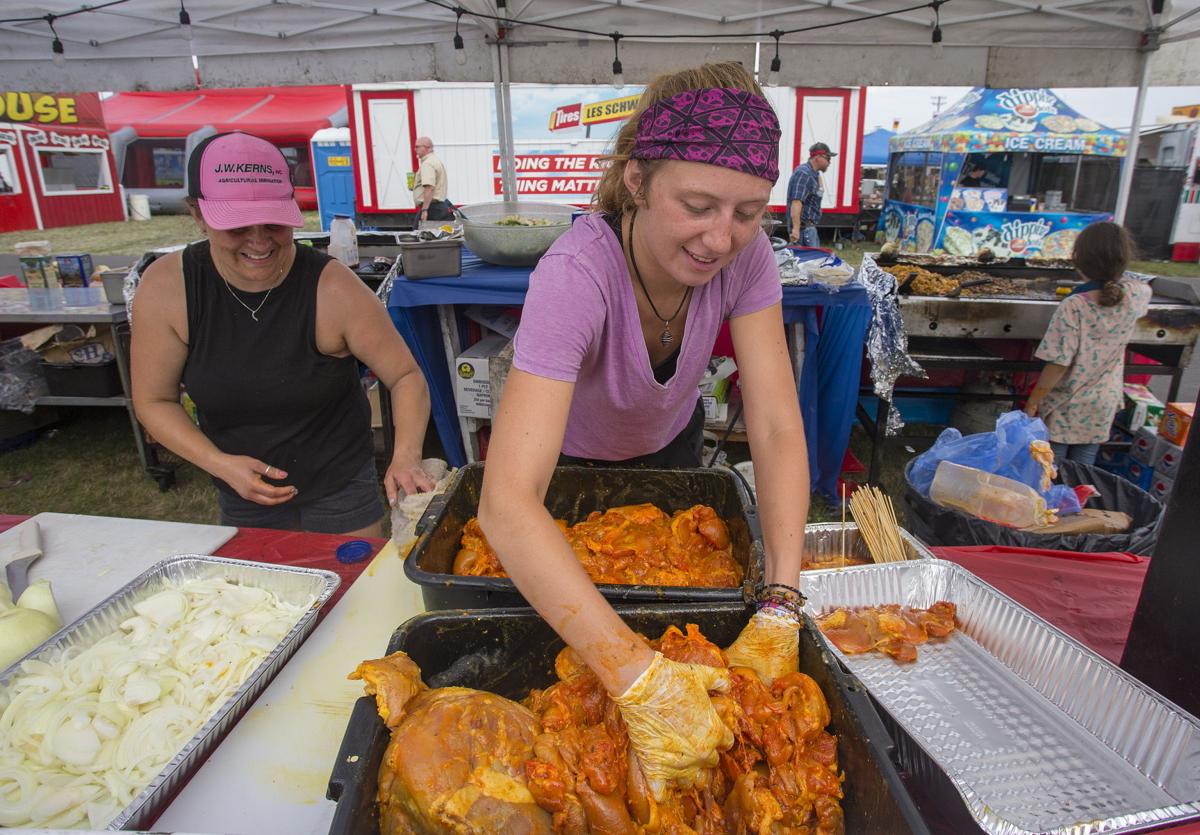 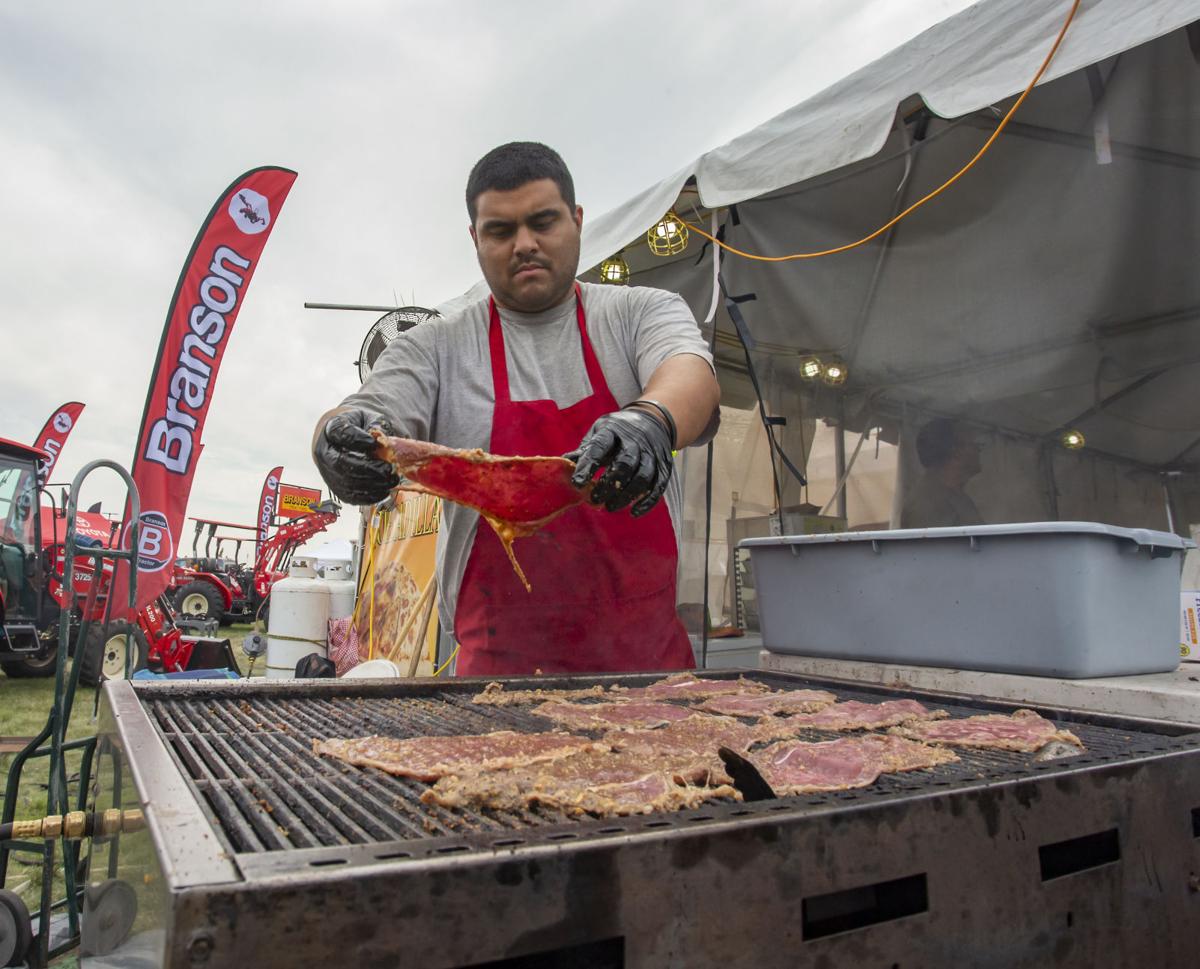 Michael Hernandez throws meat onto the grill at a food vendor booth at the Umatilla County Fair.

Dan Dirksen adds grilled onions to a sausage at a booth at the Umatilla County Fair Wednesday afternoon.

Tabor Mills receives a burger and fries from the kitchen at the Lions Club stand before delivering it to a customer at the Umatilla County Fair Wednesday afternoon.

Michael Hernandez throws meat onto the grill at a food vendor booth at the Umatilla County Fair.

HERMISTON — As Umatilla County Fair attendees roam the booths and barns, it is often families who provide the fuel for their adventure.

Children help their parents serve up funnel cakes, or spouses work in tandem to take orders and fry corndogs. At the International Foods booth, which serves up treats such as kebabs and gyros, Louie Sbaih’s 7-year-old daughter Hanan Sbaih was pushing meat and fresh vegetables around the grill.

“Yesterday she asked me, ‘Please Daddy, I’m bored, can I wait on customers?’” he said.

He said she did such a good job that some customers returned the next day to ask for her specifically to make their food. He doesn’t want her taking over his business someday, though — the single father is determined to make sure his daughter achieves her goal of becoming a judge.

“My father’s a lawyer, my brother is a lawyer, my cousins are lawyers,” he said. “I went to college but didn’t finish. I want my daughter to be not just a lawyer but a judge, over all of them.”

Sbiah comes up from Las Vegas each summer to escape the heat by working fairs in the Pacific Northwest. This week is his first time at the Umatilla County Fair, and although it hasn’t turned out to be an escape from the heat, he said he was thoroughly enjoying himself.

“This is a great fair, very well put together,” he said. “It’s very organized, and the staff is very helpful. ... If you ask me how I rate this fair, it would be an A+.”

Elizabeth Peterson started working at her parents’ Monster Foods booth when she was 15, and is still at it almost 20 years later. The booth serves up “monstrously huge” fair foods, such as elephant ears the size of a pizza.

Peterson, who came down from Alaska to help run the Umatilla County Fair booth, said her parents raised foster children, and it was hard on their budget to take large groups of children to the fair.

“We make monster foods so that families can try a little bit of everything and still afford it,” she said.

Many of the fair’s vendors come from the Tri-Cities, such as Nany Scott, who serves Filipino food at the Taste of Manila booth.

She is originally from the Philippines, and said she loves cooking for other people at the fair.

“I want them to learn of our food and how good it is,” she said.

While food is important at the fair, staying hydrated is even more essential, especially after the first two days of the fair pushed the thermometer up to triple digits in the afternoon. Lemonade stands are some of the busiest in the afternoons, as red-faced fairgoers seek after a tall glass of something cold and sweet.

Michelle Hagans was serving up lemonade at the Davis Amusement lemonade stand Wednesday afternoon, helped out by Bella, 10, who couldn’t remember how to spell her last name.

Hagans said they hand out a lot of water to young children and the elderly to make sure they’re staying hydrated. As for the lemonade, they currently have strawberry and original, but are hoping at some point to add a watermelon option.

Some of the people handing out food at the fair aren’t getting paid for it. The Lions Club booth is staffed with volunteers who donate their time so that all of the proceeds can go to Lions Club projects ranging from local scholarships to the rebuilding of Funland playground.

“Not only do we have the best hamburgers, the coldest drinks and the freshest fries, but all the money we make goes back into the community,” said Phil Hamm of the Lions Club.