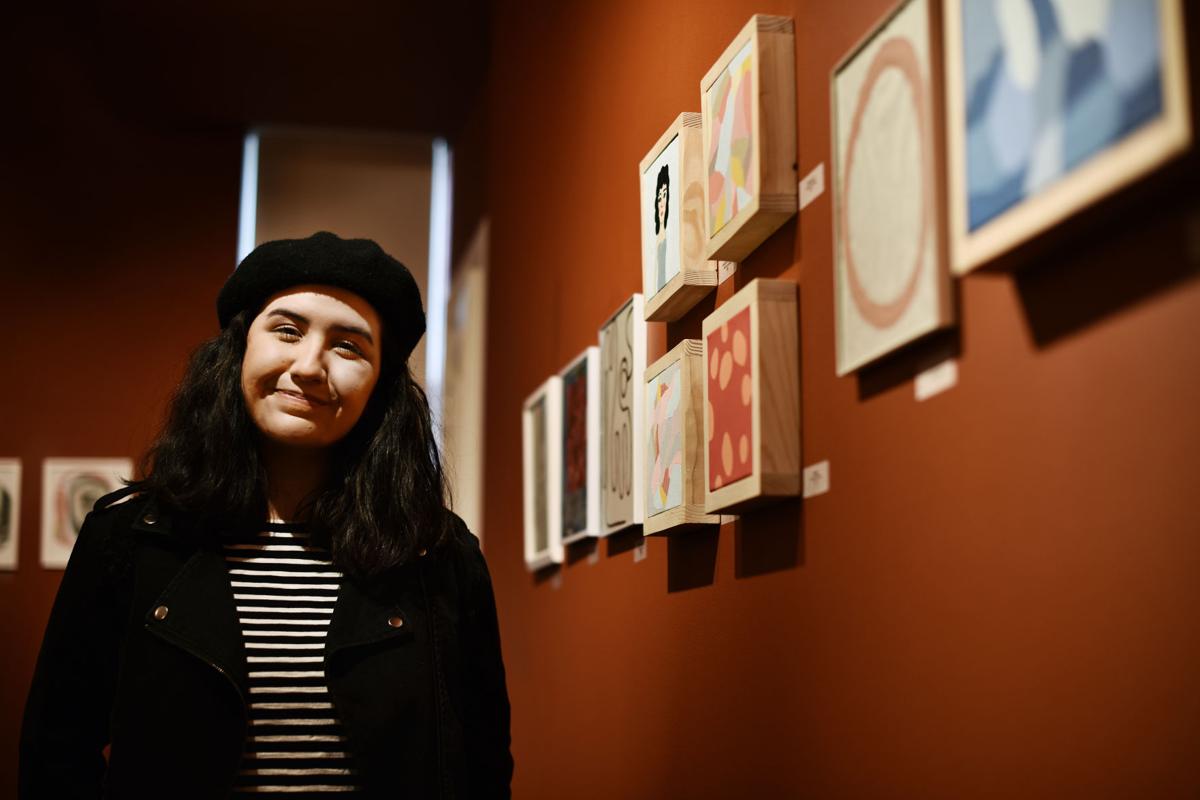 Pendleton artist Alysha de Martinez, 15, sold two of her works on display at the Pendleton Center for the Arts to real estate developer Jordan Schnitzer. 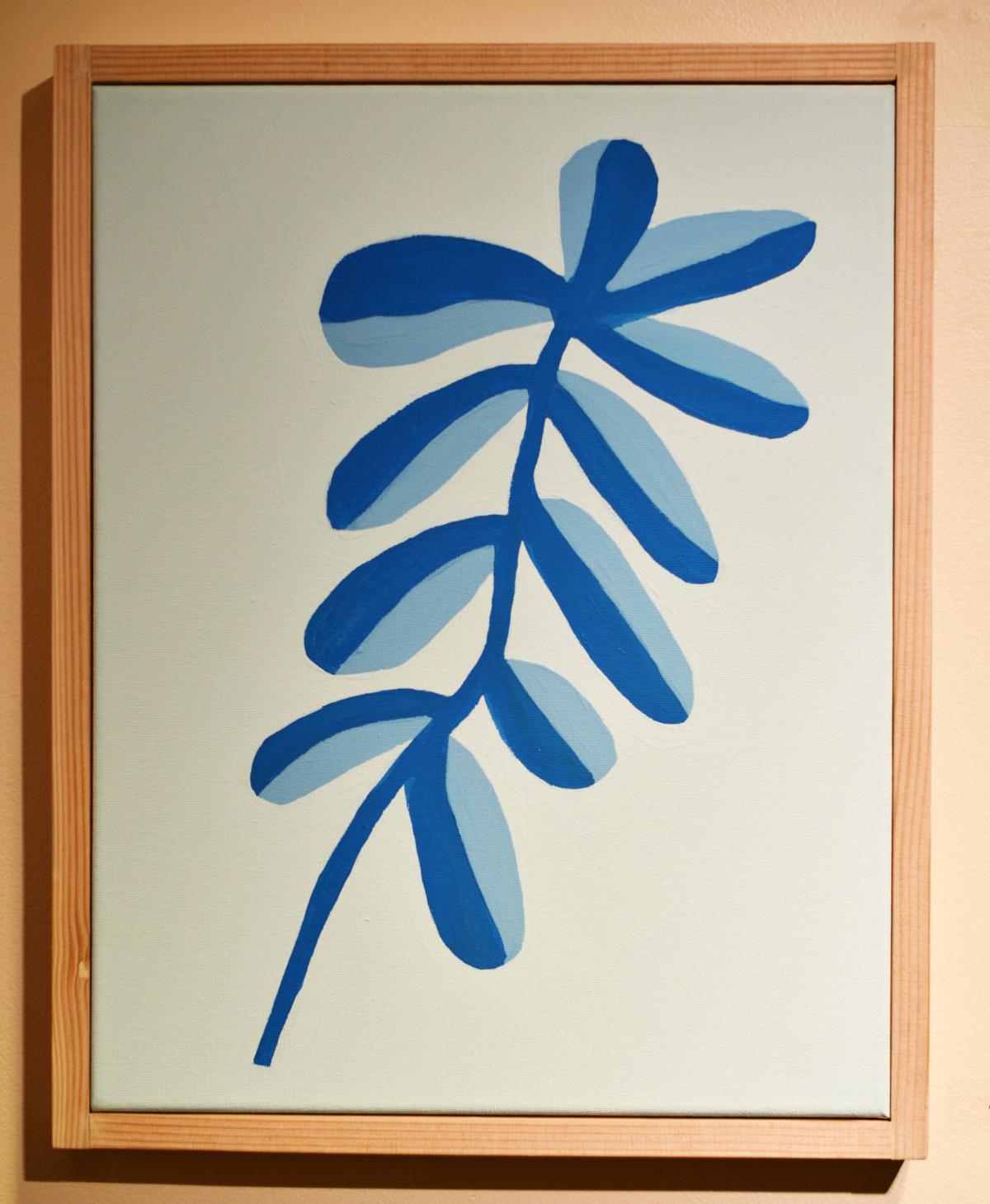 Alysha de Martinez's piece of acrylic on canvas titled “Elena” on display at the Pendleton Center for the Arts.

Pendleton artist Alysha de Martinez, 15, sold two of her works on display at the Pendleton Center for the Arts to real estate developer Jordan Schnitzer.

Alysha de Martinez's piece of acrylic on canvas titled “Elena” on display at the Pendleton Center for the Arts.

Not many fledgling artists can say they sold work to a major collector at their very first art show, but a Pendleton teenager did just that.

Two abstract pieces created by Alysha de Martinez, 15, are now part of real estate developer Jordan Schnitzer’s extensive art collection. The Portland businessman and art aficionado traveled to Pendleton on March 16 to attend the opening of an exhibit of the works of Louise Bourgeois. The art, borrowed from Schnitzer’s collection, lined the walls of the art center’s main upstairs gallery.

Alysha’s pieces, colorful and abstract, hung in a different part of the building, a little off the beaten path. Roberta Lavadour, the executive director of the art center, escorted Schnitzer down a flight of stairs to the Lorenzen Board Room Gallery where he met de Martinez and her parents. De Martinez’s paintings and collages ringed the room. As Schnitzer gazed at them one by one, he asked the teenager questions.

“I was extremely impressed with the quality of her acrylics and collages — so impressed that I bought two of them,” Schnitzer said. “Equally impressive was her maturity, her demeanor and her confidence in herself.”

The Pendleton High School sophomore is self taught. She does most of her work on her bedroom floor with art supplies — brushes, jars of paint, paper and magazines for clipping — spread around her.

The teenager said she has random inspirations that eventually find their way onto canvas or paper. De Martinez calls them her midnight creative spills. Inspiration “comes from my teenage soul,” she said, admitting she stays up “way too late.”

When it comes to art, de Martinez knows what she likes.

“I like abstract art,” she said. “My biggest inspiration is Henri Matisse. I’m constantly on Pinterest looking at pins of Henri’s work.”

Matisse, a French artist, died in 1954 before Pinterest was even an idea, but he seems to have reached out from the past and grabbed de Martinez like a kindred spirit.

“I feel like we have similar interests,” she said.

The artist, who worked as an intern at the arts center, was encouraged by Lavadour to organize a show. The director gave the teen six months to prepare.

On the night of the opening, de Martinez was anxious. Except for Lavadour and her parents, nobody had really seen her art. She went to the boardroom and braced herself. Jordan Schnitzer was the first person through the door.

“For him to be the person to come in here to look…,” she stopped and gave an amazed head shake.

Eventually, they both headed upstairs for the formal opening of the Bourgeois exhibition in the East Oregonian Gallery. The French-born painter and sculptor is known for her spider sculptures, which range from tiny to towering. Bourgeois was also a prolific printmaker of various subjects until she died at age 98 in 2010. Schnitzer, who spoke by phone this week, said he loved having pieces by Bourgeois and a young artist featured in the same building — a juxtaposition of the two artists, one a master and the other just beginning.

“Louise Bourgeois was a significant artist of the last 50 years,” Schnitzer said. “She burst through a lot of glass ceilings.”

He said he couldn’t imagine how hard it was for Bourgeois as an emerging artist in the 1950s and 1960s to be taken as seriously as her male counterparts.

At the Bourgeois opening, he took a moment to introduce Alysha to the gathered art admirers.

“You’re off to a very good start,” Schnitzer told her. “Never stop following your dream.”

The experience has bolstered the teenager’s opinion of herself. She’ll never forget Schnitzer telling her, “One day when your work is the Museum of Modern Art in New York, I’ll be able to say I bought your first piece.”

“I didn’t consider myself as an artist for the longest time,” she said. “It was cool to finally accept it.”

Both exhibits run through May 5.