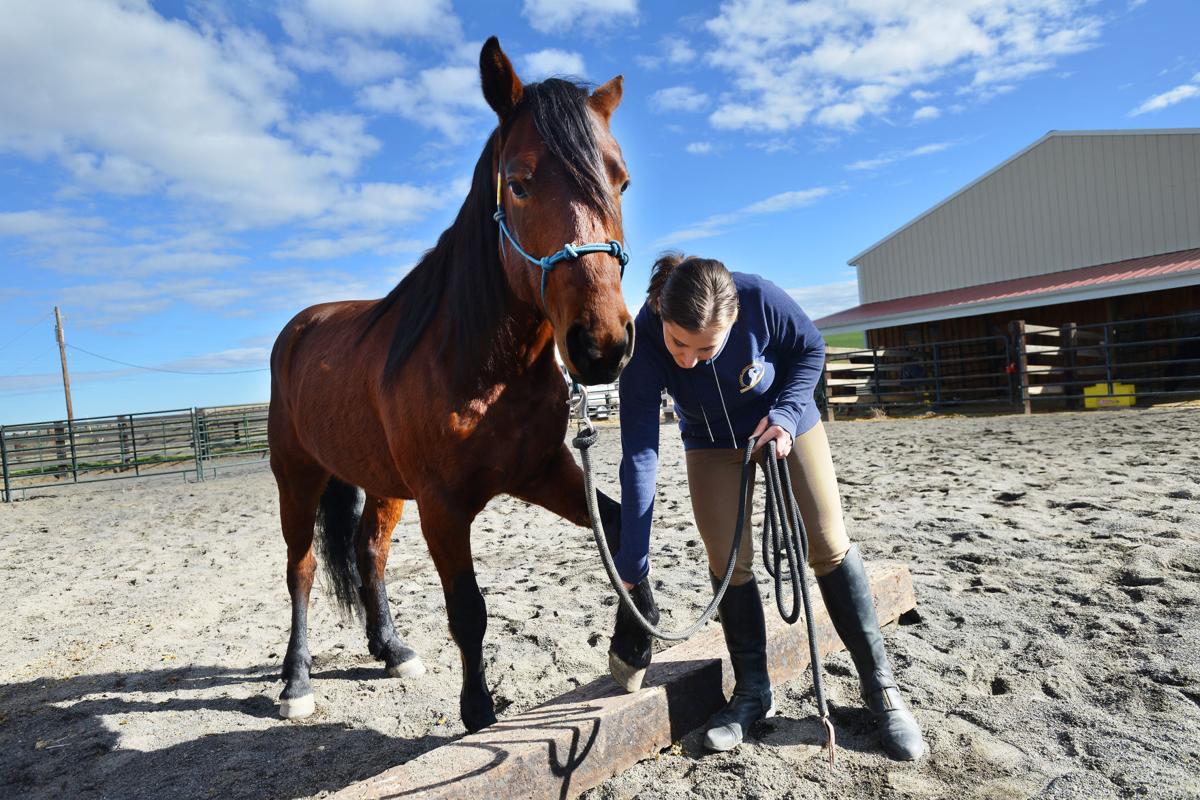 Staff photo by E.J. HarrisMadison Feller lifts the leg of her mustang, Leo, while training the animal Monday at her home outside of Pendleton. Feller got the horse through Teens and Oregon Mustangs, a nonprofit that pairs teens and wild horses. 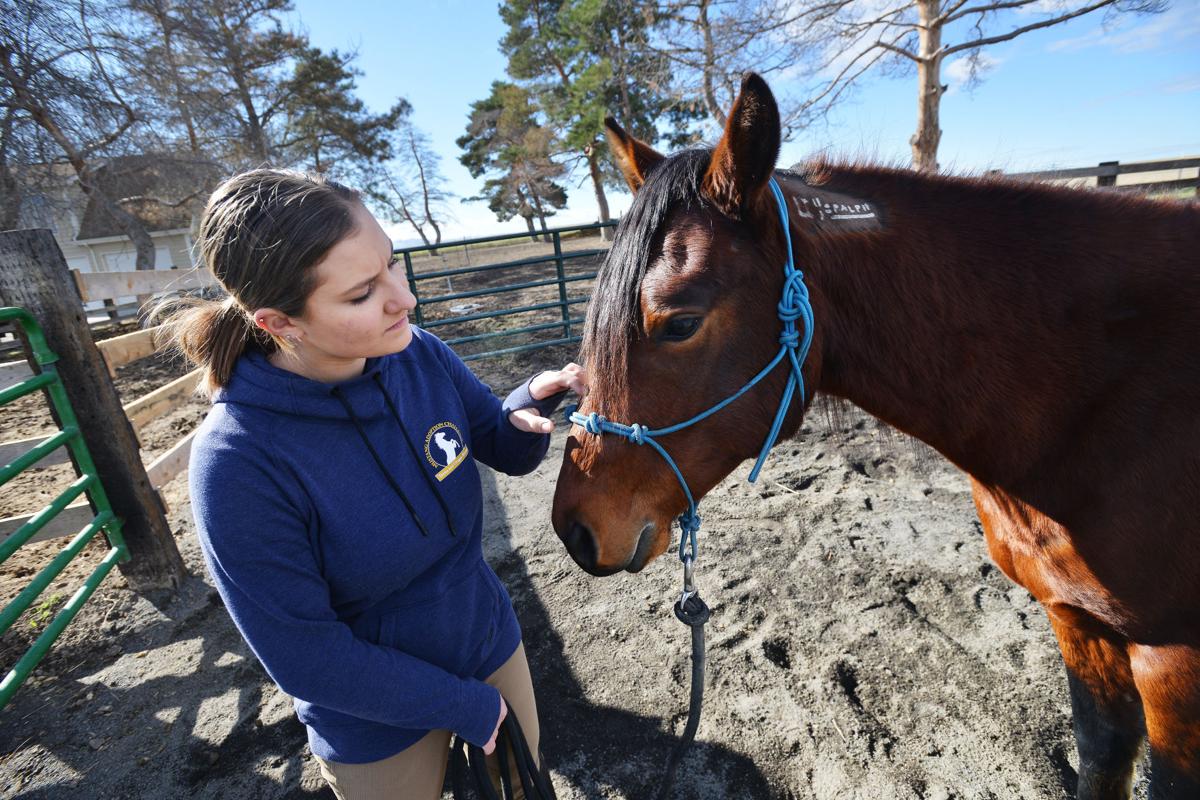 Staff photo by E.J. HarrisMadison Feller scratches the nose of her mustang, Leo, while training the animal Monday at her home outside of Pendleton. 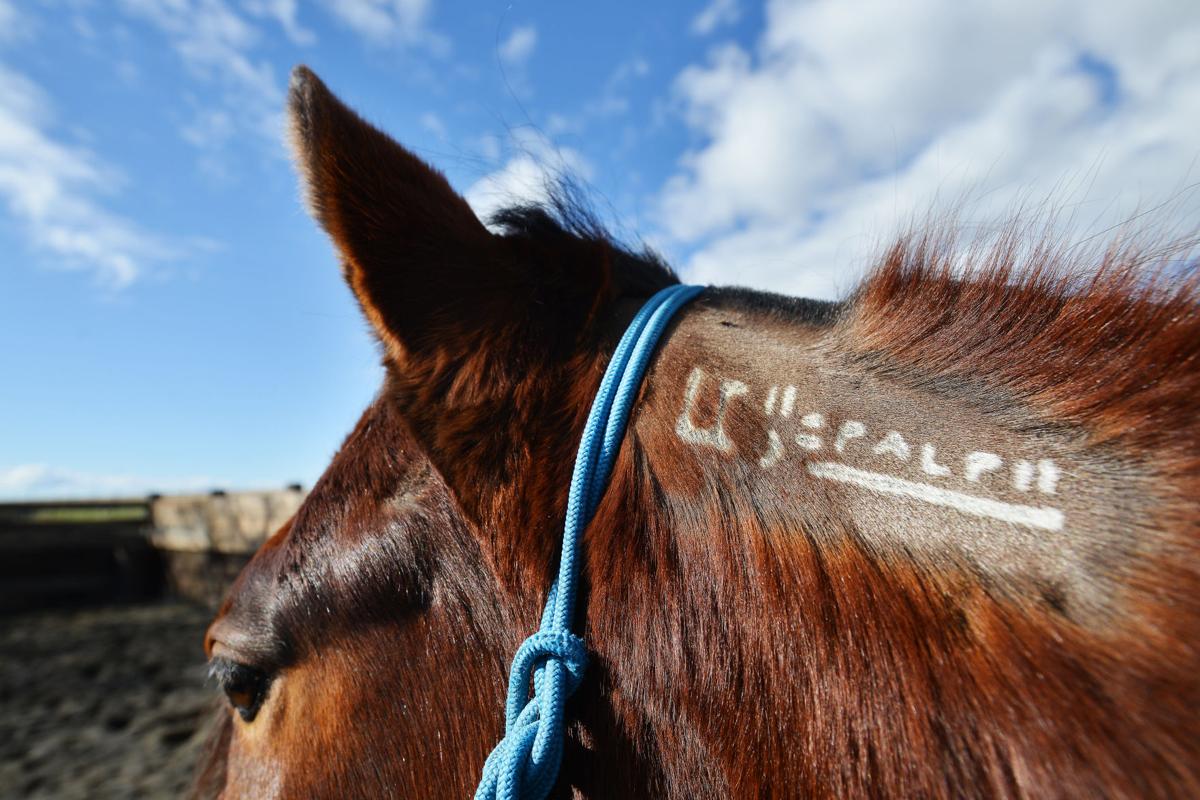 Staff photo by E.J. HarrisThe Bureau of Land Management freeze brands all of the wild mustangs they round-up. 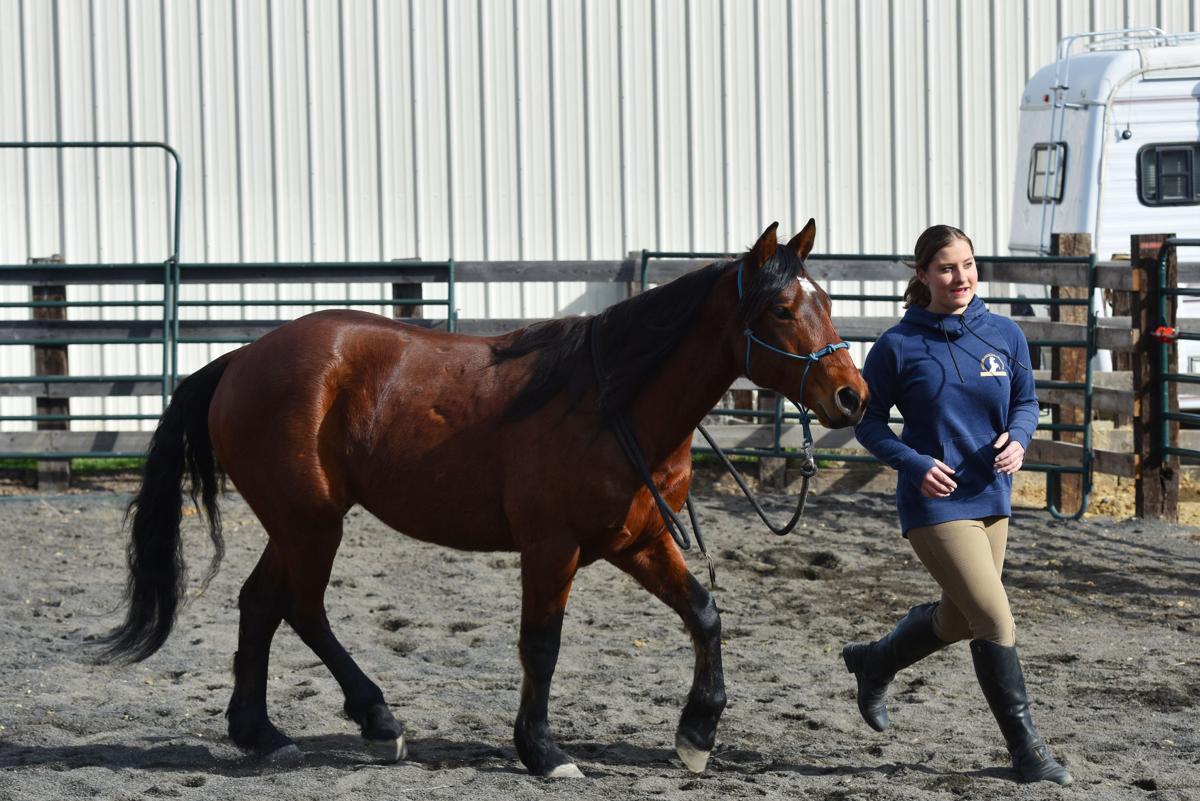 Staff photo by E.J. HarrisMadison Feller runs along side of her mustang, Leo, without holding his lead rope while training the animal Monday at her home outside of Pendleton.

Staff photo by E.J. HarrisMadison Feller lifts the leg of her mustang, Leo, while training the animal Monday at her home outside of Pendleton. Feller got the horse through Teens and Oregon Mustangs, a nonprofit that pairs teens and wild horses.

Staff photo by E.J. HarrisMadison Feller scratches the nose of her mustang, Leo, while training the animal Monday at her home outside of Pendleton.

Staff photo by E.J. HarrisThe Bureau of Land Management freeze brands all of the wild mustangs they round-up.

Staff photo by E.J. HarrisMadison Feller runs along side of her mustang, Leo, without holding his lead rope while training the animal Monday at her home outside of Pendleton.

Madison Feller bounced on the balls of her feet and peered through the rail fence. Nervous energy surged through her body as she waited for the first glimpse of the wild mustang she would train over the next 98 days.

The Pendleton teenager had signed on with Teens and Oregon Mustangs, a nonprofit that pairs teens and wild horses. Each of the 40 feral horses in the St. Paul Rodeo corral that day had run wild in Oregon, untouched by human hands, until they were caught and placed in a Bureau of Land Management holding facility. Their teenage trainers would gentle their charges, train them and bring them to the Linn County Fairgrounds on March 22 for a three-day competition and auction.

Madison, 16, ignored the pouring rain as she strained her eyes to get a look at Leo, the bay horse assigned to her. Finally, a helper shooed the mustang into an alleyway that led to the back of the family’s horse trailer.

Madison drank in the sight of him.

“He was gorgeous,” she said. “A bright red coat, thick black mane and tail, bay markings, stocky legs, and to top it all off, a white star on his forehead.”

She and her parents, Sarah and Patrick Feller, drove the horse to their small ranch just outside of Pendleton. Training was a delicate dance. The teenager had trained horses before, but never one this raw. She absorbed writing and videos by horse trainer Clinton Anderson and put his techniques into practice. Early on in the process, she drove Leo around a round pen to keep him moving in a quest to establish dominance.

“Horses in a herd have a pecking order ­—whoever moves first is on the losing end,” Madison said “You have to prove you’re dominant over them.”

Eventually, Leo realized he could trust Madison and the two became inseparable.

“He follows her everywhere,” said Sarah.

Madison, who is homeschooled and the oldest of nine siblings, made Leo a priority. Over the next few months of daily training, Leo got comfortable with his human handler.

“He’s changed drastically. He went from being spooky, unreliable and reactive to a trusting partner,” Madison said. “He’s chill with everything now.”

Erica Fitzgerald launched Teens and Oregon Mustangs in 2008 after competing in the Extreme Mustang Makeover. Fitzgerald said the reason for starting the teen group was twofold.

First, she hoped to give young aspiring horse trainers the same boost she got training her first mustang.

“I figured out that if I would have learned as a teenager what this horse taught me in my 30s, I would be so much farther ahead,” Fitzgerald said. “These horses are untainted and virtually untouched by humans. You learn a lot from wild horses. I wanted to take that to the kids.”

Fitzgerald’s other reason for starting the program is the glut of wild horses in this country. She said the Bureau of Land Management, which manages wild horses and burros, periodically removes excess animals for the health of the land and the herds. Under the 1971 Wild Free-Roaming Horse and Burro Act, excess horses are stockpiled in holding areas or are adopted out. Slaughtering the animals is not legal.

“There are thousands of them rotting in corrals in containment centers,” she said.

According to the BLM, Oregon had about 4,300 free-roaming horses (as of a year ago). Nationwide, more than 72,000 roam on BLM-managed rangeland and currently about 45,000 are held in off-range facilities.

She doesn’t blame the BLM for this. The law is clear and the agency is doing the best it can in a difficult situation, she said. Every wild horse trained is one less horse in a holding corral.

During the auction on March 25, members of the public can bid on the horses trained by the kids. Minimum bid is $100, which covers the government fee to get title and have a veterinarian inspect the horse. In past years, winning bids ranged from $165 to $7,200. Since the group started, 356 wild horses have been trained and adopted out.

Earlier this week, Madison ran Leo through his paces in the Fellers’ corral. The horse stepped easily onto a pair of railroad ties at Madison’s command. He walked backwards at the gentlest of nudges. The pair communicates subtly without much talk or pulling on the rope.

During the competition that starts Thursday, Madison will guide Leo through a course that includes such obstacles as bridges, gates and ramps. The competition will also include showmanship and body conditioning divisions. Sarah said her daughter took the challenge seriously.

“You can’t have a day off,” she said. “You can’t veg out on the couch. You have to put on your boots and hit the barn. It takes blood, sweat and tears.”

Leo did his part, too. They prayed for the right horse, Sarah said, and got him.

Madison and the other young trainers may purchase their horses for $25 or auction them off and keep the money (minus $100). Madison, who plans to formally adopt her mustang, marvels at what she has learned from Leo. She gives her horse most of the credit.