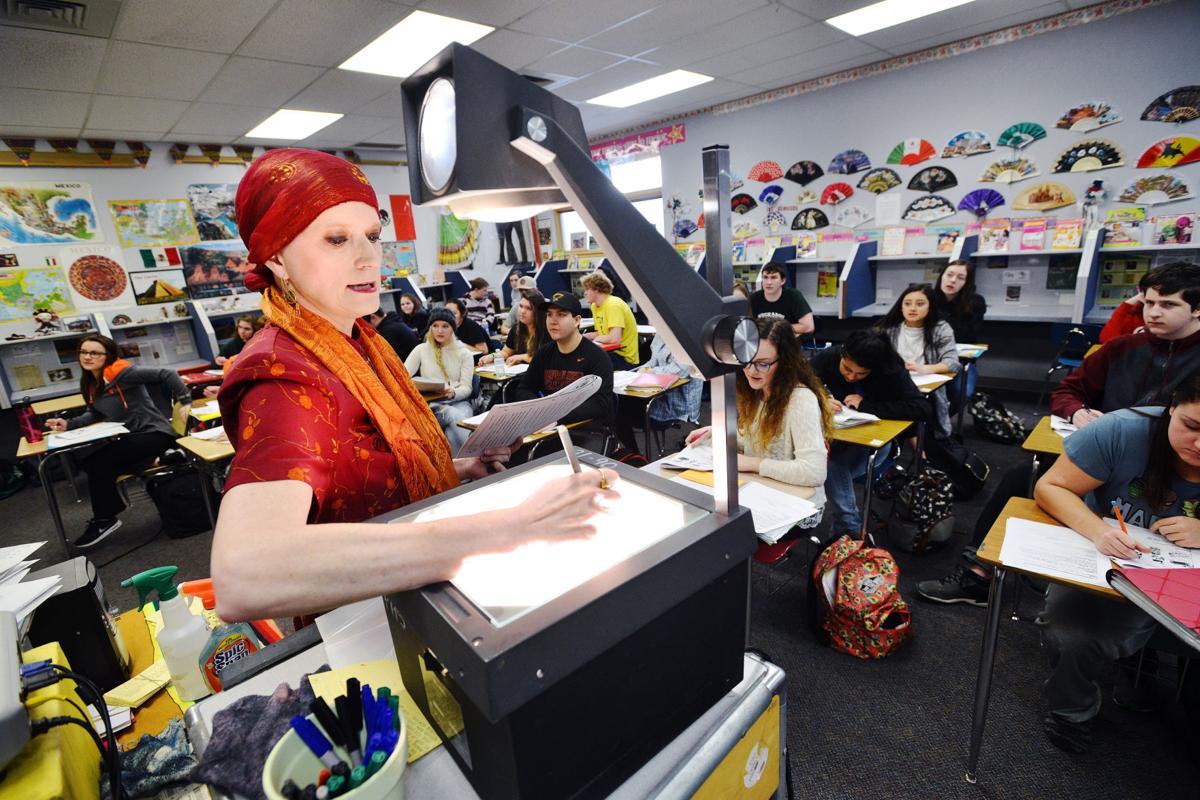 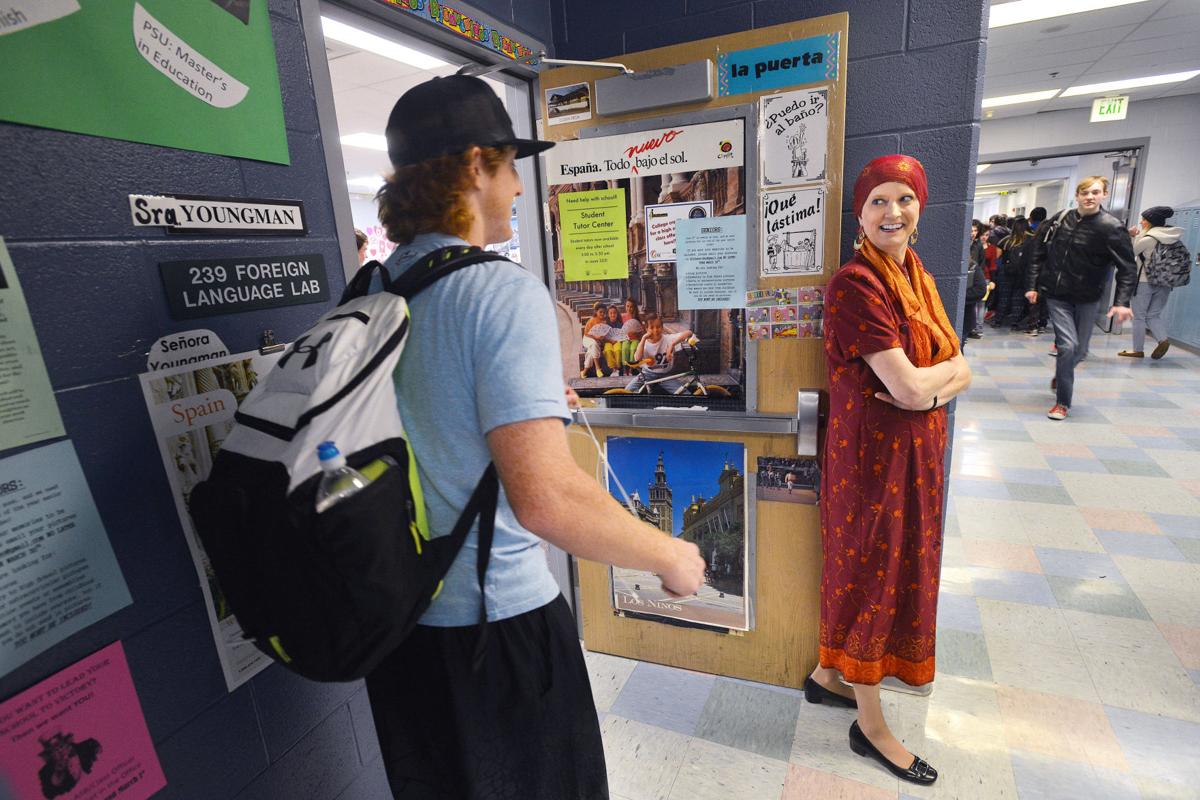 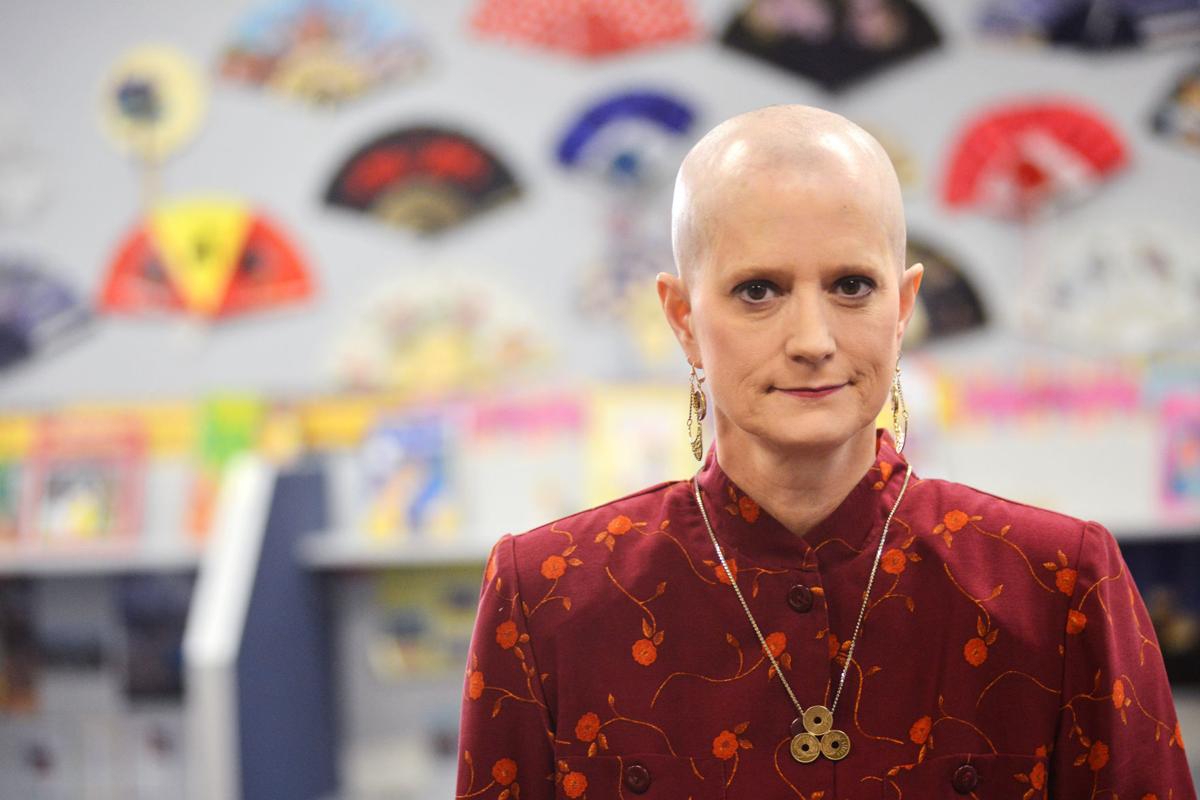 Spanish language teacher Kathryn Youngman has lost her hair due to chemotherapy treatments she has undergone while battling against breast cancer. This is Youngman's third bout fighting cancer.

Spanish language teacher Kathryn Youngman has lost her hair due to chemotherapy treatments she has undergone while battling against breast cancer. This is Youngman's third bout fighting cancer.

Kathryn Youngman treats her third bout with cancer as she would a mean playground bully who regularly shoves her to the ground and steals her lunch money.

Those who know the Pendleton High School Spanish teacher say Youngman concedes no power to the bully. She deals with the tyrant when she must and quickly switches her focus to things that matter more: her family, her students and her faith.

On a recent day, the veteran teacher worked her Pendleton High School classroom with the precise timing of a Vegas comedian or Fortune 500 CEO. She wandered among the students firing questions and instructions.

“Turn to your partner and ask, ‘Are you hungry?’” Señora Youngman directed. “Answer in a complete sentence.”

The volume in the room rose and fell. Youngman plunged back into the fast-paced dialogue with her students. They dared not daydream, lest they be left in their teacher’s wake. Their eyes followed the constantly moving Youngman with the concentration of a tennis crowd watching the ball at Wimbledon.

Though her style is fast and furious, her students say she is kind and inspirational. If someone falls behind or fails a test, Youngman spends time encouraging and coaching the student. She stands at the doorway before each class greeting pupils as they enter and taking the effort to know them personally. She posts a fresh motivational quote in the classroom each day.

Her students know all about the cancer. They realize Youngman’s strawberry blonde hair with wispy bangs is a wig that covers a head bare from multiple rounds of chemo. Her older students traveled down this road with their teacher two years ago when a tumor was discovered in her sinuses. This time, it popped up as breast cancer.

When Youngman learned she would face yet another cancer battle, she gently informed her classes.

Senior Chyenne Carey admitted she “started crying a little” as Youngman broke the news around Thanksgiving and assured students that she believed the stage two cancer could be defeated.

“She said I’m fine with this,” Carey said. “She told us not to worry.”

The teenagers are trying, but it’s tough, knowing what they could lose.

“We experienced her last cancer our sophomore year. This time, it’s hit us a lot harder,” Reilly Heggarty said of himself and the rest of the seniors. “She doesn’t make a big deal about it, but we’re very concerned for her.”

The veteran teacher travels to the Tri-Cities Cancer Center every other Monday for chemotherapy. Radiation will follow. The treatments make her nauseated, dizzy and weak.

A group of students hope to raise money to pay for the uninsured portion of Youngman’s expensive treatments and medications and maybe help her realize a dream.

“She’s a big fan of Ellen (Degeneres),” said Katie Montchalin, who substitutes for Youngman on treatment days. “One of her wishes is to meet her. We’re making a video to get Ellen’s attention.”

The video will feature a narrative and shots of students, each holding a sign with one word describing Youngman. The NBC show occasionally honors inspiring teachers.

In addition, Montchalin, also Youngman’s niece, set up a Go Get Funding account at gogetfunding.com to raise money. The campaign is titled “Help Mrs. Youngman fight her battle.”

The ongoing cancer battle is only Youngman’s latest physical challenge.

Youngman’s mother, Marie Groshong, said Kathryn’s life started in dramatic fashion. The family lived in McKenzie Bridge, in the Oregon Cascades. When Groshong went into labor, a sheriff’s deputy transported her the 50 miles to the hospital in Springfield. A construction delay slowed the journey and the vehicle later broke down and had to be towed.

“She was born three minutes after we got to the hospital parking lot,” Groshong recalled.

Dean and Marie’s girl attacked life, they said. She got good grades, competed tenaciously in athletics and faced challenges with a dry sense of humor.

At age 10, Kathryn almost died of a burst appendix. At 27, a tangerine-sized lump was removed from behind her breastplate. The powerful chemo treatments for Hodgkin’s disease burned Youngman’s veins, damaged her hips (which eventually had to be replaced) and made her infertile. Youngman, however, gave birth to twins several years later thanks to in vitro fertilization using eggs given by her sister, Rebecca Barlow, and sperm from Kathryn’s husband, Jim.

“They screwed the mask to the table. It was claustrophobic,” Marie said. “It was hard. She steeled herself for that.”

Youngman said she survives by focusing on the positive. A Mother Teresa quote she keeps on her desk sums up her attitude. “Spread love everywhere you go. Let no one ever come to you without leaving happier.” In her dark moments, she said, “I remind myself that 30 or 40 years ago I wouldn’t be alive. I remind myself to be grateful for what I have, rather than resentful for what I don’t have.”

“I don’t want to die. I’m not ready to die,” she said. “But if I have to die, I hope to accept it graciously. I know I’m going to a better place. I will leave life with no regrets.”

“Her faith has always been absolutely unshakable,” said Groshong, admitting that she worries. “She has pain 24/7. I don’t know how she does it. I would trade places with her in an instant.”

But that isn’t an option. Those who love Youngman can only send positive energy and encouragement. As they sit on the sidelines, they are inspired.

“She’s a beautiful person, inside and out,” said student April Barkhurst. “She turns negatives into positives. She lights up every room.”

“She’s really inspiring,” said Samantha Cross. “She taught me that the toughest things can be a blessing.”