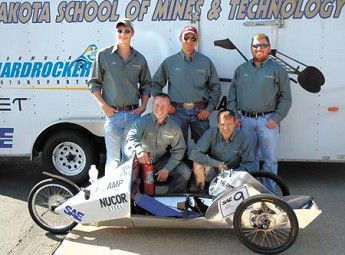 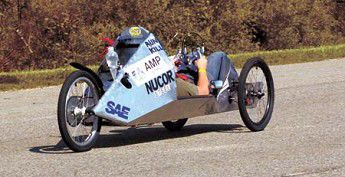 The South Dakota School of Mines & Technology car cruises around the track.

The South Dakota School of Mines & Technology car cruises around the track.

As a little boy, Jeff Comrie was obsessed with Legos. In high school, the Pendleton teen got hold of an old Jeep, tore it apart and put it back together.

This year, as a senior at the South Dakota School of Mines & Technology, he kicked it up a notch, laboring to build a car capable of getting 1,000 miles to the gallon.

Comrie and five other engineering students spent the entire year designing, manufacturing and testing their car. This month, they towed their creation to Michigan, to compete against other college teams in the SAE (Society of Automotive Engineers) Supermileage competition.

The eight month period leading to the competition was an adventure in logistics, an engineering odyssey Comrie couldn't have imagined.

The squad was the school's first team to enter the supermileage competition. Thinking back, the five young men - Comrie, Trent Oddenbauck, Todd Curtis, Isaac Williams and Brian Atnip - admit to a certain naivety.

The designing phase went smoothly. It wasn't until the manufacturing stage that the major headaches started.

"We came to realize that a lot of the parts we designed couldn't be manufactured with the tools and equipment we had," Comrie said. "We came to a lot of dead ends."

The team wanted to encase the guts of their car in a light, aerodynamic, fiberglass shell - a feat that wasn't so easy to pull off. Using pourable foam, they fashioned eight mold sections that they planned to conjoin and layer with fiberglass.

"We put a heavy plastic vacuum bag over the entire thing and sealed it," Comrie said. "We put a vacuum pump on one end and a large canister of epoxy on the other."

In theory, the vacuum would suck epoxy out of the canister and coat the body evenly, but it was a bust. Faced with soft spots and air gaps, the students abandoned the fiberglass idea.

The team managed to make dramatic design changes, construct a chassis, install brakes and a drive chain and test the car - all in the month they had left. Then the young men embarked on the 1,000-mile trek from Rapid City to Marshall, Michigan.

At a hotel along the way, the students got curious about how fast the car could go.

"We took it out and zipped around in the hotel parking lot," Comrie said. "Then we took it to a local road that appeared to be abandoned. We got it up to 51 before we ran out of road."

Pretty cool, they thought. The police officer watching didn't agree. He pulled the car over and gave the team's official driver, Isaac Williams, the smallest and lightest member of the team, a verbal warning for going 51 in a 25 mph zone and driving a vehicle that wasn't street legal.

In Michigan, the team surveyed the 1.6-mile oval track where they would run their car. The track, which has a hill and sloping sides, is normally used to test differentials on semi trucks.

Three teams hailed from India. One came from the Kingdom of Bahrain.

After passing inspections by judges, the South Dakota car hit the track for some test drives. During one run, the speedometer registered 57 mph.

One of the judges appeared shocked the car could go so fast, Comrie said.

Drivers must cruise along at average speeds of 15-20 miles per hour or receive penalties. To save fuel, most teams use the burn and coast method of driving.

"You run the motor for about 15 to 20 seconds then turn it off and coast," Comrie said. "There's a certain amount of fuel wasted just keeping the engine running - if your car's really efficient in rolling, you can save fuel by just coasting."

The team gave it seven tries. The driver mixed it up a bit, doing variations of burning and coasting for six runs, keeping the motor running on the final run.

When it was all over, the team earned 17th place, with 312 miles per gallon, nowhere near the original goal of 1,000. Team members didn't sink too deep into depression. The exercise, Comrie said, will help future School of Mines' teams, giving them a framework.

The South Dakota team marveled at the winner, Universite Laval, a French Canadian team out of Quebec. The team had racked up an impressive 1,876 mpg with their futuristic, low-slung machine.

"In previous years, they've been able to pull off up to 3,170 mpg," Comrie said. "They won by a landslide, but were severely disappointed."

"High-efficiency bearings," Comrie said. "They could coast forever - it looks like they're floating."

"He doesn't like to brag about himself," he said.

Jeff, who was home-schooled for most of his youth, enrolled at Blue Mountain Community College classes during his high school years.

Now that he's graduated, Comrie has a paying gig with a university professor. In a project funded by the Air Force, Comrie will help develop a levitation system for rocket cargo.

"Say you put a satellite in the space shuttle cargo bay," Comrie said. "There are lots and lots of vibrations. The project seeks to levitate the cargo in the shuttle bay so it doesn't feel the vibrations."

He called the venture "a huge undertaking" with "with many, many baby steps along the way."