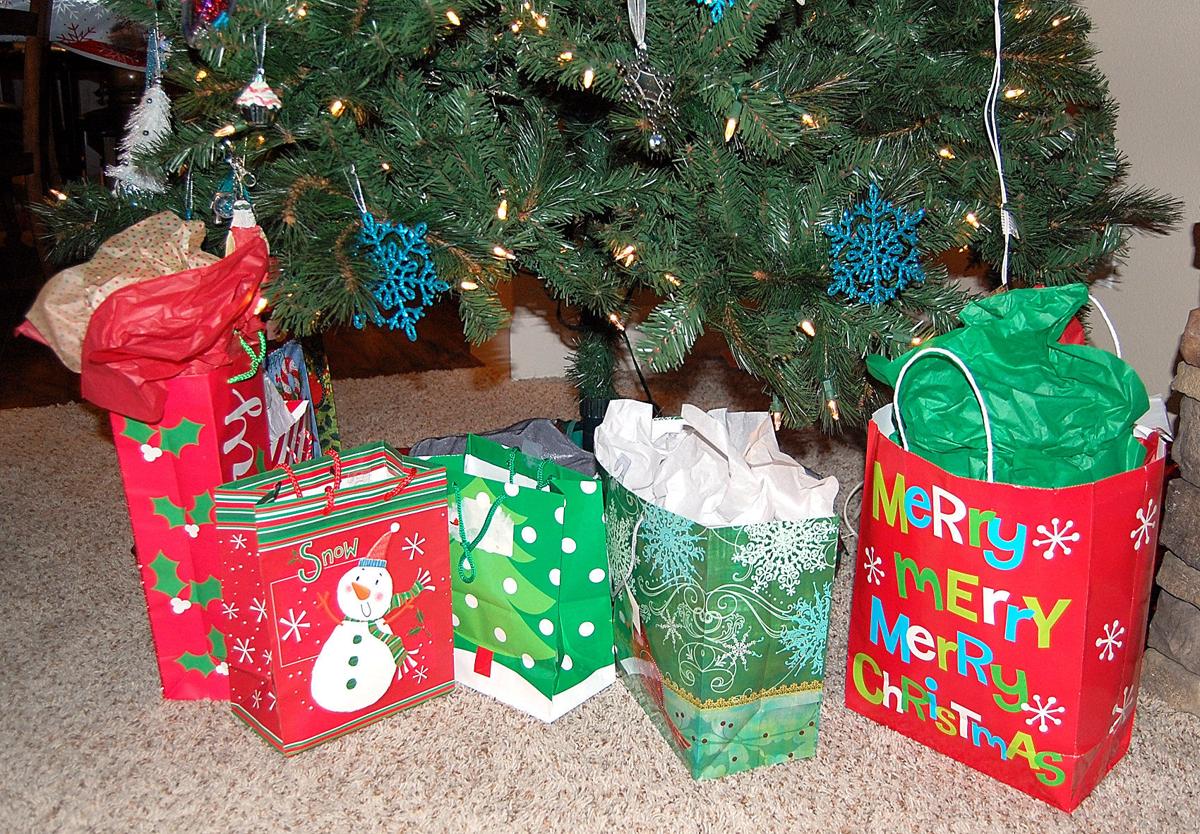 Presents sit under the tree at the home of Shawn Logue. The Hermiston woman hosted a Dec. 16 Christmas potluck and gift exchange for members of an informal coffee klatch. 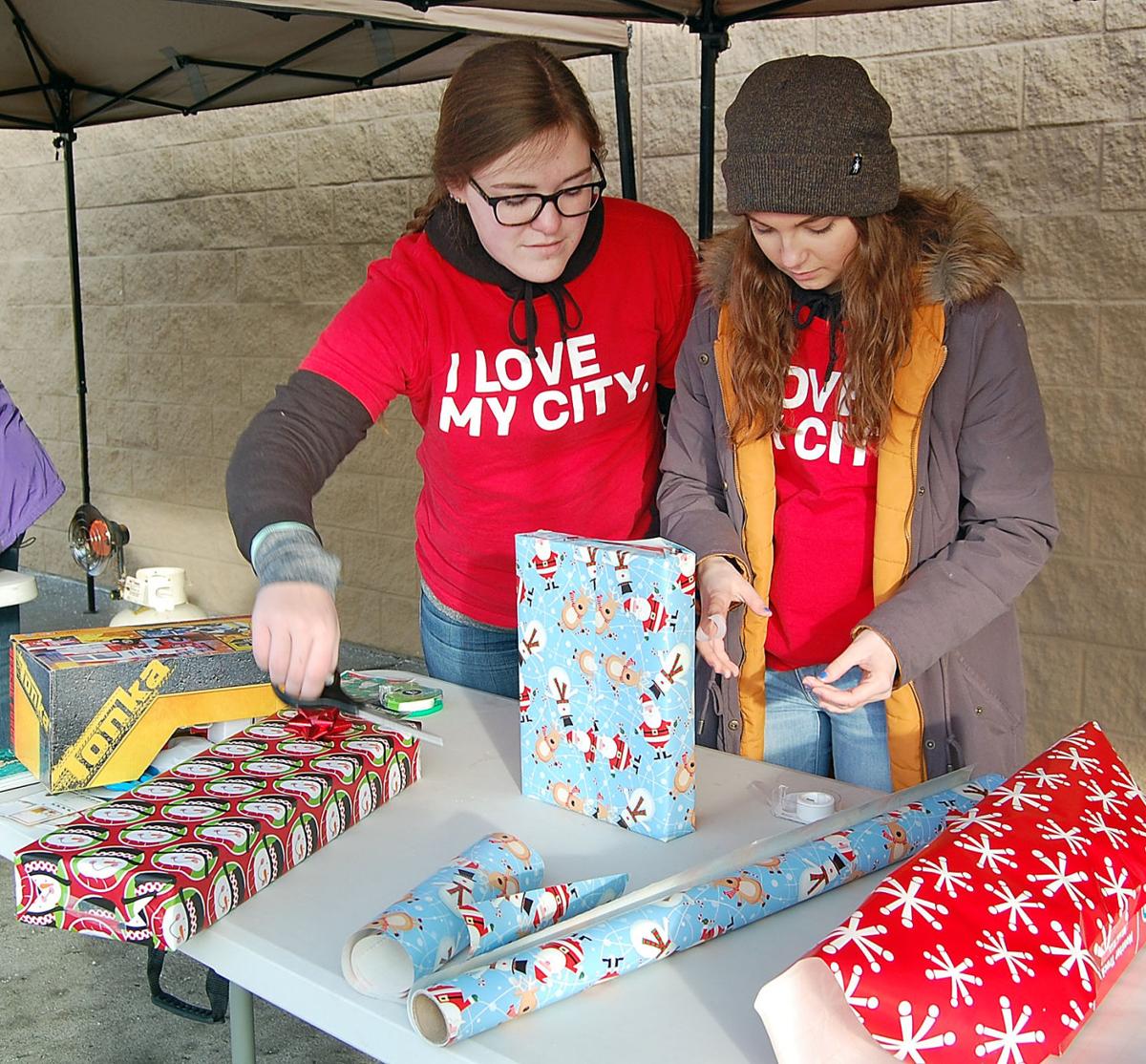 Christina Haight and Breena Wadekamper, both 17, volunteered during an “I Love My City” gift wrapping project Dec. 16 at Walmart in Hermiston. 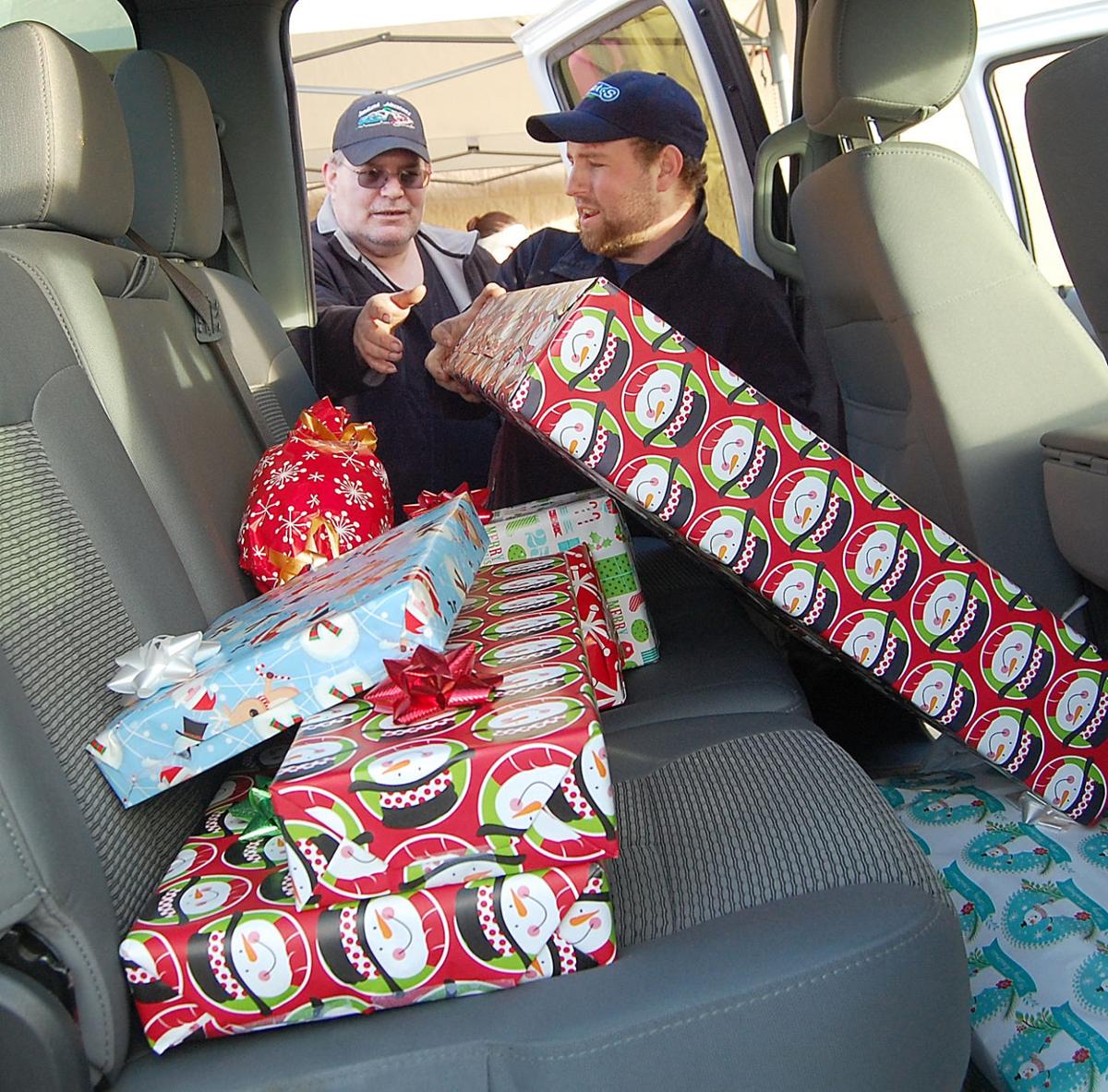 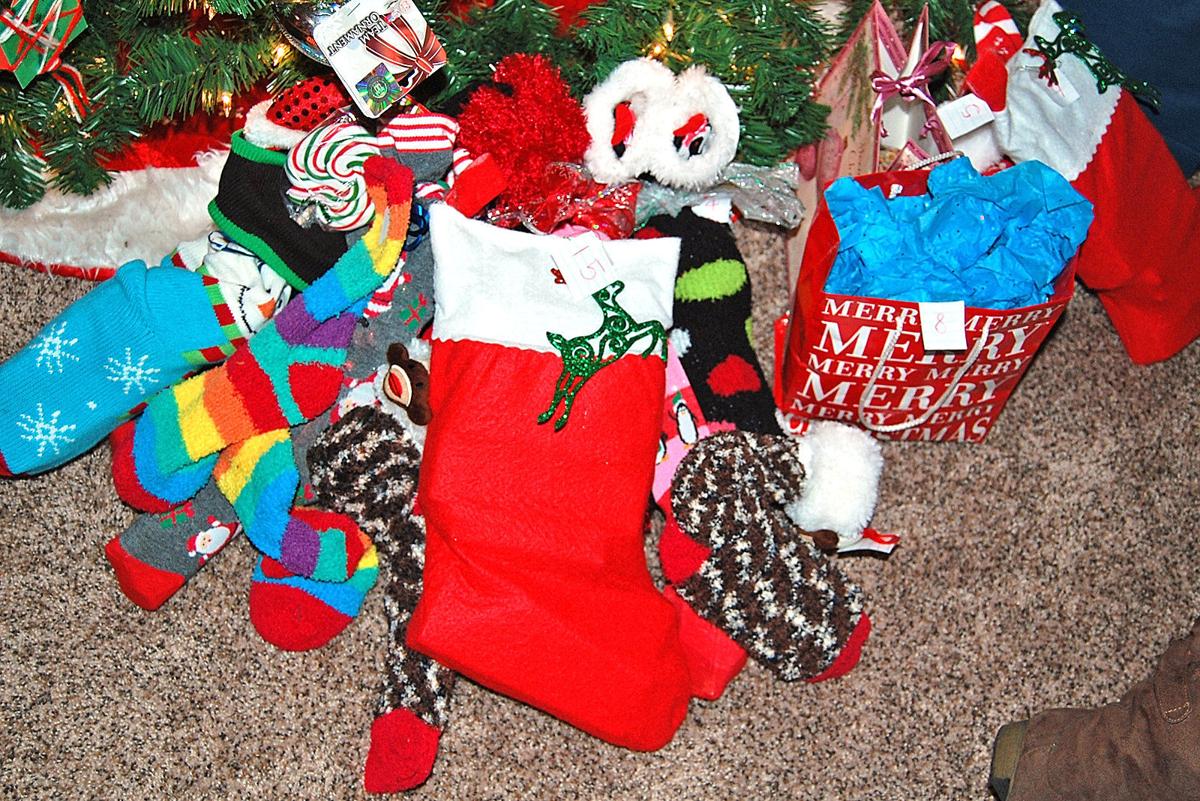 Members of an informal coffee klatch put gift-filled stockings under the tree during a 2015 Christmas potluck and sock exchange at the Hermiston home of Deana Cordell. 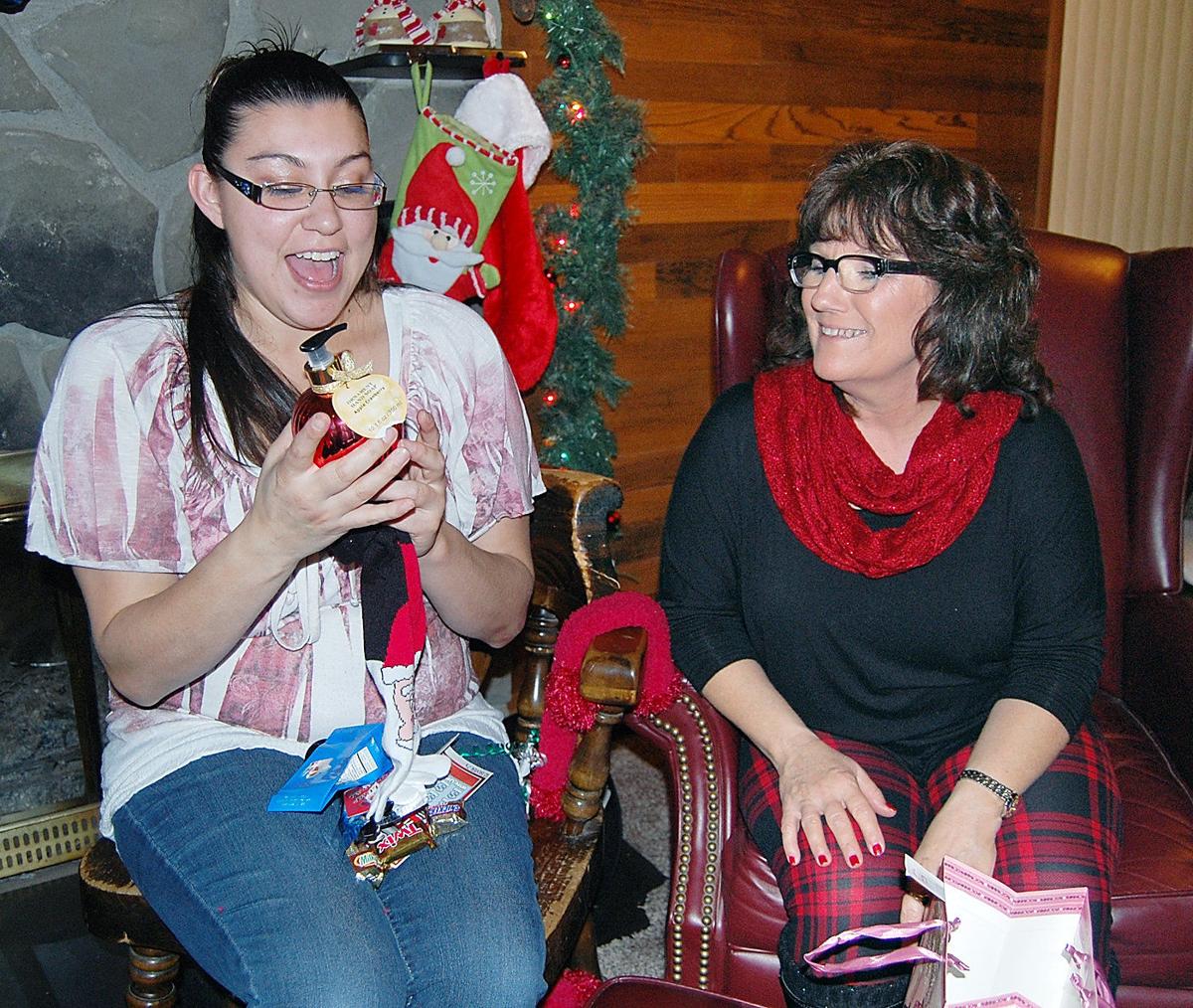 Haley Jones opens an ornament-shaped hand soap dispenser while Carol Greene looks on during a 2015 Christmas potluck and sock exchange at the home of Deana Cordell in Hermiston.

Presents sit under the tree at the home of Shawn Logue. The Hermiston woman hosted a Dec. 16 Christmas potluck and gift exchange for members of an informal coffee klatch.

Christina Haight and Breena Wadekamper, both 17, volunteered during an “I Love My City” gift wrapping project Dec. 16 at Walmart in Hermiston.

Members of an informal coffee klatch put gift-filled stockings under the tree during a 2015 Christmas potluck and sock exchange at the Hermiston home of Deana Cordell.

Haley Jones opens an ornament-shaped hand soap dispenser while Carol Greene looks on during a 2015 Christmas potluck and sock exchange at the home of Deana Cordell in Hermiston.

Brightly wrapped packages are a familiar sight under Christmas trees across the world.

Many children grow up believing in Santa Claus. You know the story — the jolly old elf dons a red suit, hitches up a team of reindeer and flies through the night delivering gifts on Christmas Eve.

Growing up in a Christian home and married to a minister, Maria Hurty of Stanfield encourages people to not lose sight of the reason for the season. In her advent devotional, “Christmas Crazy to Jesus Joy!,” she admits to “doing it wrong” for many years.

Many people, Hurty included, was more focused on extravagant dinners, decorations to outdo the neighbors and shopping ‘til she dropped.

A time-honored tradition of the holiday season is to give and receive presents. Rev. Billy Graham’s website suggests that the centuries-old practice seems to replicate the biblical story of the wise men presenting gifts of gold, frankincense and myrrh when they met baby Jesus.

But the question remains — what about the man in the red suit? He’s known by various names, including St. Nicholas.

Many legends and stories have swirled around about the real Nicholas, who lived nearly 2,000 years ago. Hurty shares about the tradition of hanging stockings and filling them with blessings.

In her book, available on Amazon.com, Hurty introduces people to Nicholas, who enjoyed helping others by sharing his wealth. As the story is told, Nicholas became aware of a destitute father who considered selling his daughters into servitude.

“When Nicholas heard of their predicament, he crept into their home undetected and put a sack of gold into each of their stockings, which were hanging by the fire to dry,” Hurty said.

While she stresses that Christmas isn’t about Santa Claus, Hurty still encourages people to give of themselves by using their resources or talents to bless others.

And it’s not necessary to go deep into debt. Hurty suggests filling stockings with blessings, which can include small gifts, candy or a short letter. She shared about the touching sentiments of a handwritten note from her then 10-year-old son, Hobs.

“I love you more than TV” melted the mom’s heart more than any store-bought gift ever could.

The spirit of Christmas can include spreading the joy of the season, appreciation of unwrapping a present that’s needed or the touching sentiments of something unexpected. Several Eastern Oregon residents shared what the gift of giving and receiving means to them.

•Sen. Bill Hansell of Athena finds cutting firewood for his wood stove is very therapeutic. However, when his aging chainsaw was becoming less dependable, he was thrilled when his children pitched in and bought him a brand new Stihl chainsaw.

•Several years ago, Roberta Lavadour of Pendleton had randomly complained about her mis-matched flatware. Lavadour said her daughter, Lindsay, who listens for hints and clues throughout the year, bought her a beautiful set of flatware.

“It’s really special when someone really knows you, and you know they’ve been listening to you,” Lavadour said. “Also, the nice thing is I think of her every day when I use it.”

•Over the years Heidi Sipe of Umatilla had given money to her brother when he needed help with rent, buying groceries or paying bills. Opening a Christmas card 11 years ago, she was surprised when a whole wad of cash fell out. Never expecting to be repaid, Sipe is still moved to tears when she thinks about it.

“I never kept track of the money I gave him, but he did,” Sipe said. “It made me realize he had become a man.”

•Erica Sandoval of the Hermiston Police Department is looking forward to giving each of her team members at work a special ink pen. Working with them for the past year, Sandoval said the camaraderie and brotherhood has rejuvenated her. Each Thin Blue Line Pen is handcrafted from military fired .308 rounds. She said it will provide a lasting reminder of the connections she’s made with her team.

•Moving to Pendleton in October 2016, fire chief Mike Ciraulo said he and his wife, Gilda, were embraced by the community.

“We felt so welcome and blessed by the community,” he said.

As a result of the warmth, the Ciraulos wanted to give back to the community. Ciraulo said they decided to go all out in decorating their Northwest Ellis Avenue home. Ciraulo views the two-month long project as a gift to the community and as a way to say thanks.

“Everyone is super excited — it just warms out hearts,” he said.

•Rep. Greg Smith of Heppner shared about a recent Christmas blessing that his son and daughter-in-law received. Grant, who is studying law, and Vivian, who is in nursing school, slid on an icy road and slammed into an ornamental mailbox attached to the gated home of a 10,000-square-foot mansion in Eugene. Although they were unharmed, the crash destroyed the ornamental mailbox. And their vehicle, Smith said, which they only carry liability insurance on, was undriveable.

Panicked, with thoughts of being sued, they didn’t know how they would pay for the property damage, including to their only mode of transportation.

Hearing the commotion, the homeowner’s groundskeeper came out. His biggest concerns were if they were injured and that they needed to get to school.

What happened next, Smith said, is amazing. The guy took them to school, came back later to pick them up and then took them back to meet the elderly woman.

She quickly helped in settling their nerves. Not only did she appear unfazed, she told them not to worry about the mailbox. And then told them, “I’m going to have my groundskeeper take your car to get fixed as my Christmas gift to you.”