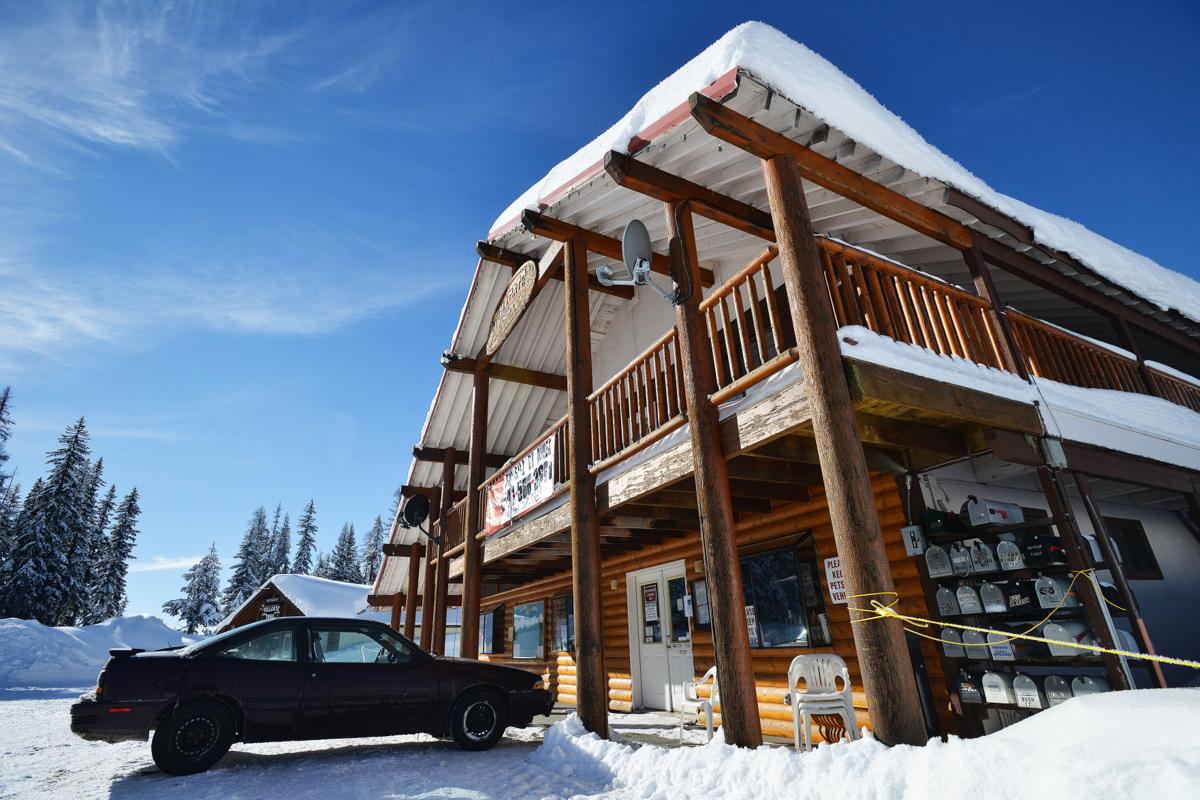 Staff photo by E.J. HarrisThe Tollgate Store marks the halfway point between the towns of Weston and Elgin on Highway 204 and is the areas only restaurant. 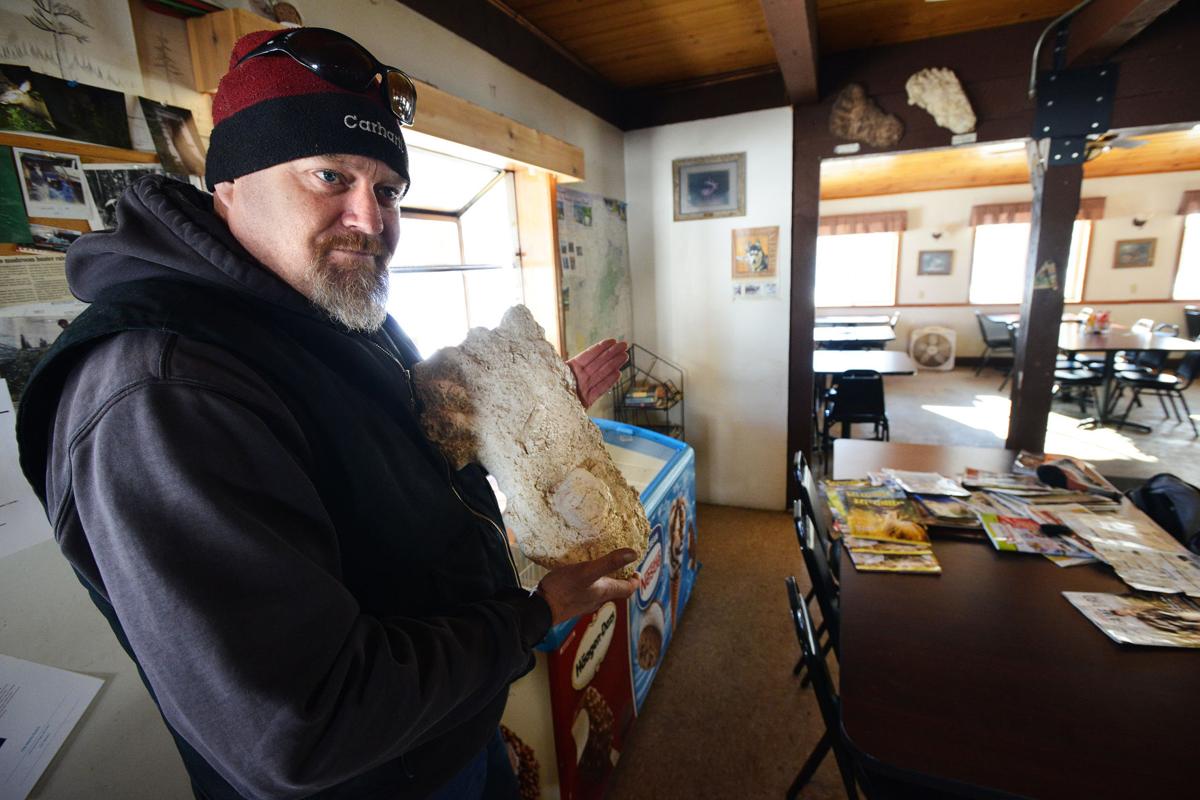 Staff photo by E.J. HarrisTollgate Store proprietor Jeff Pinsker holds a copy of a Bigfoot cast that was given to him by Clifford Barackman, star of the Animal Planet show “Finding Bigfoot”, at his store in Tollgate.

Staff photo by E.J. HarrisThe Tollgate Store marks the halfway point between the towns of Weston and Elgin on Highway 204 and is the areas only restaurant.

Staff photo by E.J. HarrisTollgate Store proprietor Jeff Pinsker holds a copy of a Bigfoot cast that was given to him by Clifford Barackman, star of the Animal Planet show “Finding Bigfoot”, at his store in Tollgate.

Cecil Berry poked inside the Tollgate Store & Restaurant on a bluebird Friday morning, snow piled high after a barrage of recent storms, looking for someone to ride the freshly groomed snowmobile trails.

“I’m here every day at 9 a.m.,” said Berry, who lives in the small mountain community. “If there’s someone to go snowmobiling with, I talk them into it.”

Perched atop the Blue Mountains halfway between Weston and Elgin along Highway 204, Tollgate is a hub of year-round outdoor recreation. There is snowmobiling and skiing during winter, mushroom hunting in the spring, camping and lake fishing over summer and big game hunting later in the fall.

For hunters, anglers and powder hounds alike, the Tollgate Store is the only place to meet and grab a bite to eat before heading out into the woods.

“This is the last resort on the mountain,” Berry said. “If it goes, there won’t even by anyplace to stop.”

After 10 years, store owner Jeff Pinsker said he is burned out and looking to sell the two-acre property, which includes the main store and restaurant, a two-bedroom home upstairs, shop next door and four rental units in the back. It is listed for sale by owner, with an asking price of $450,000.

Pinsker, 50, moved to Tollgate from California after buying the store in 2006 with his business partner, Dylan Van Dyke. While Van Dyke remains in California, Pinsker has been running the place by himself, doing everything from making coffee and flipping burgers to stocking shelves and plowing snow from the parking lot.

Though customers tend to come and go based on the weather, Pinsker said operating the store is too much for one guy.

“I’m responsible for every single thing,” he said. “It’s too much pressure, too much stress.”

Pinsker keeps the store open five days a week, closing on Monday to do banking and Thursday to shop for inventory. The store shelves are stocked with basics like chips, candy, soda, crackers and hot cocoa mix. Behind the counter, Pinsker also sells Sno-Park and firewood permits, depending on the season.

With the recent decision by neighboring Spout Springs Ski Area to close for the season, the Tollgate Store is now the only business around for food and services — primarily burgers and pizza in the restaurant. The store hasn’t sold gas for at least three or four years, after Pinsker said he was unable to break even.

“It all comes down to money,” he said. “We cannot handle that financial responsibility. Right now, my money goes to food.”

Tollgate has had a general store since the 1970s when it was a little one-room shack, Pinsker said. The current store was built in 1984, according to Umatilla County Records. The restaurant is decorated with antler mounts on the walls, and photos of local wildlife including deer, elk, bears and cougars captured on game cameras.

Another wall is adorned with a line of original Bigfoot casts, the oldest dated 1986. In fact, the Animal Planet television series “Finding Bigfoot” visited the store while filming a 2014 episode, though Pinsker said none of their footage made the final cut.

Pinsker said he will not close the store before he is able to sell.

Ron Briggs, who works in Hermiston but has lived at Tollgate full time since 1995, said he feels there is potential for the store, as the area pulls in not only sportsmen but also families from neighboring cities.

“It’s just a good place to congregate,” Briggs said. “I foresee this getting better.”

Dottie Carrell, who serves as secretary for the Tollgate Trail Finders Snowmobile Club, said she could “just about guarantee business” for the store from club members. One thing both she and Berry agreed they would like to see, however, is gasoline brought back so they can gas up their snowmobiles without having to drive into town.

Pinsker said he will continue to live in Tollgate even after the store is sold.

“I’m doing as well as one person can do. It’s time for somebody else to grab it and run with it.”