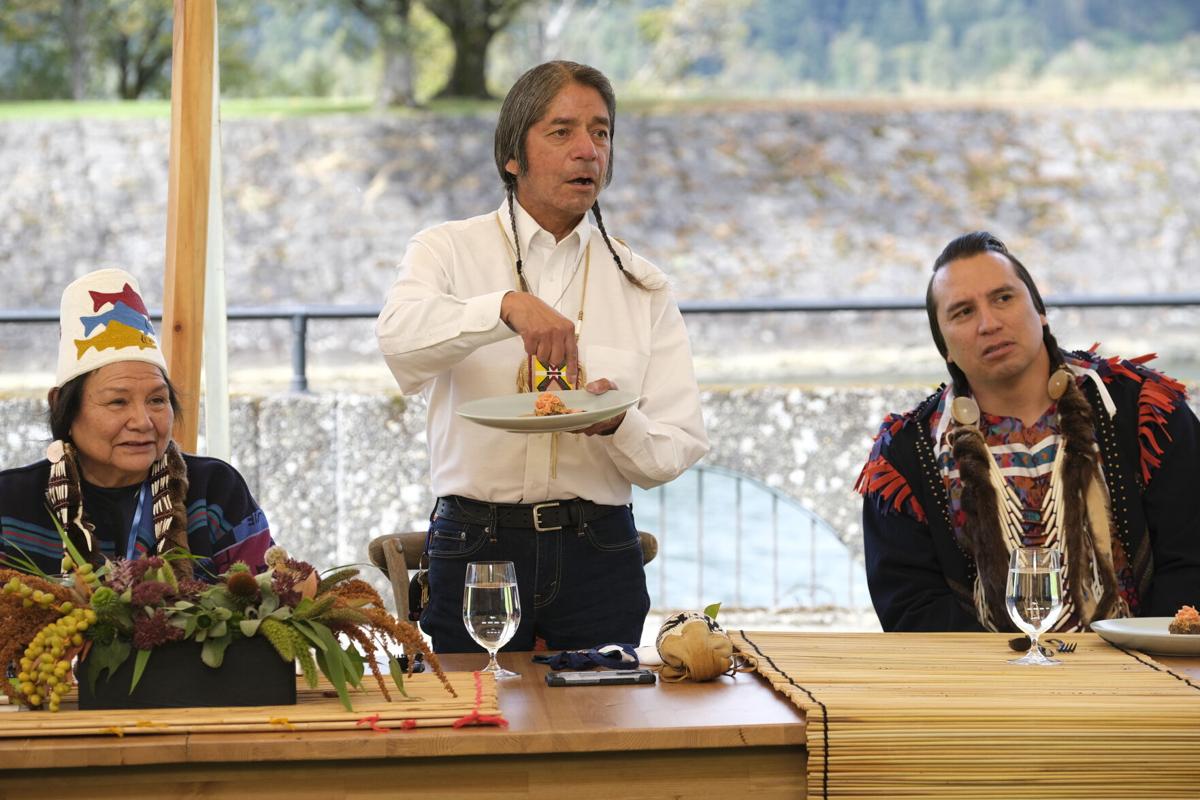 CTUIR Board of Trustees member Armand Minthorn, center, holds a plate during filming of an episode of “Top Chef” in Cascade Locks last year. Also pictured are Board of Trustees Chair Kat Brigham, left, and Vice Chair Jeremy Wolf. 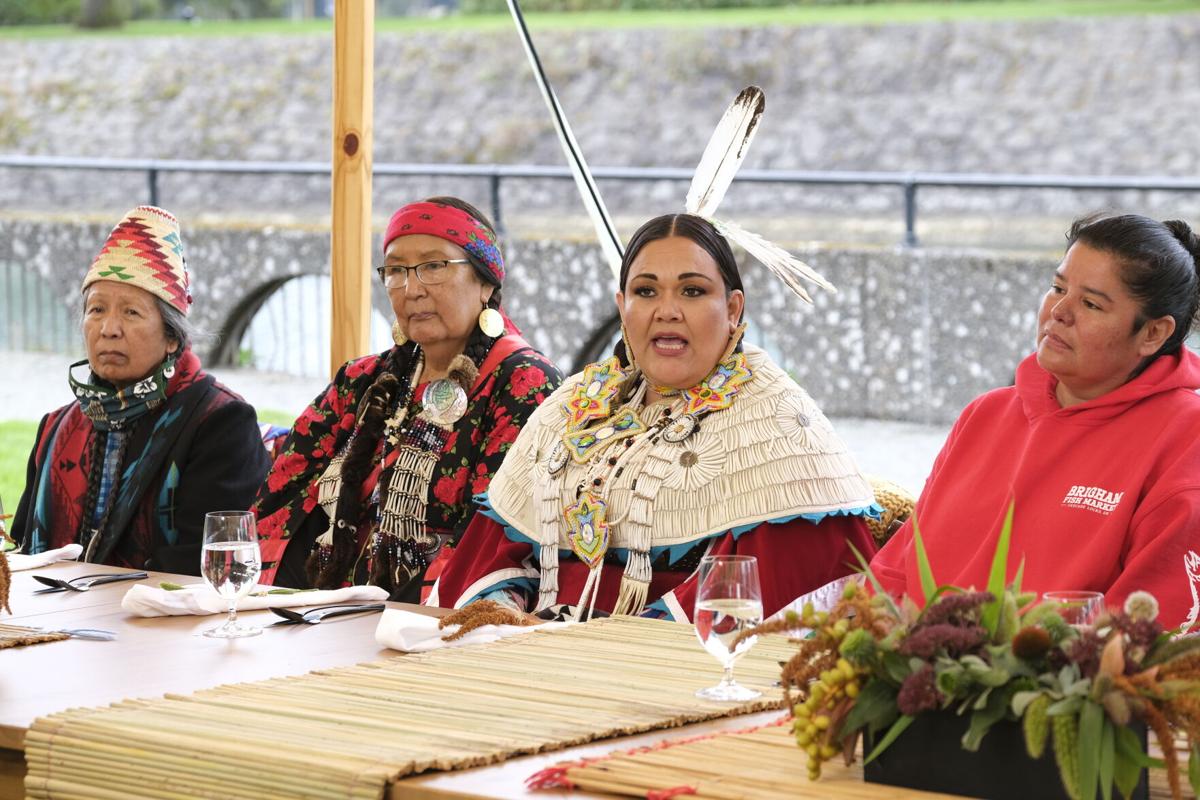 From left to right: Linda Jones, a member of the CTUIR; Roberta Kirk, a Warm Springs member; Wenix Red Elk, a CTUIR member and CTUIR Department of Natural Resources public outreach and education specialist; and Terrie Brigham, a CTUIR member, and owner of Brigham Fish Market in Cascade Locks participate in filming of an episode of “Top Chef” in Cascade Locks last year. 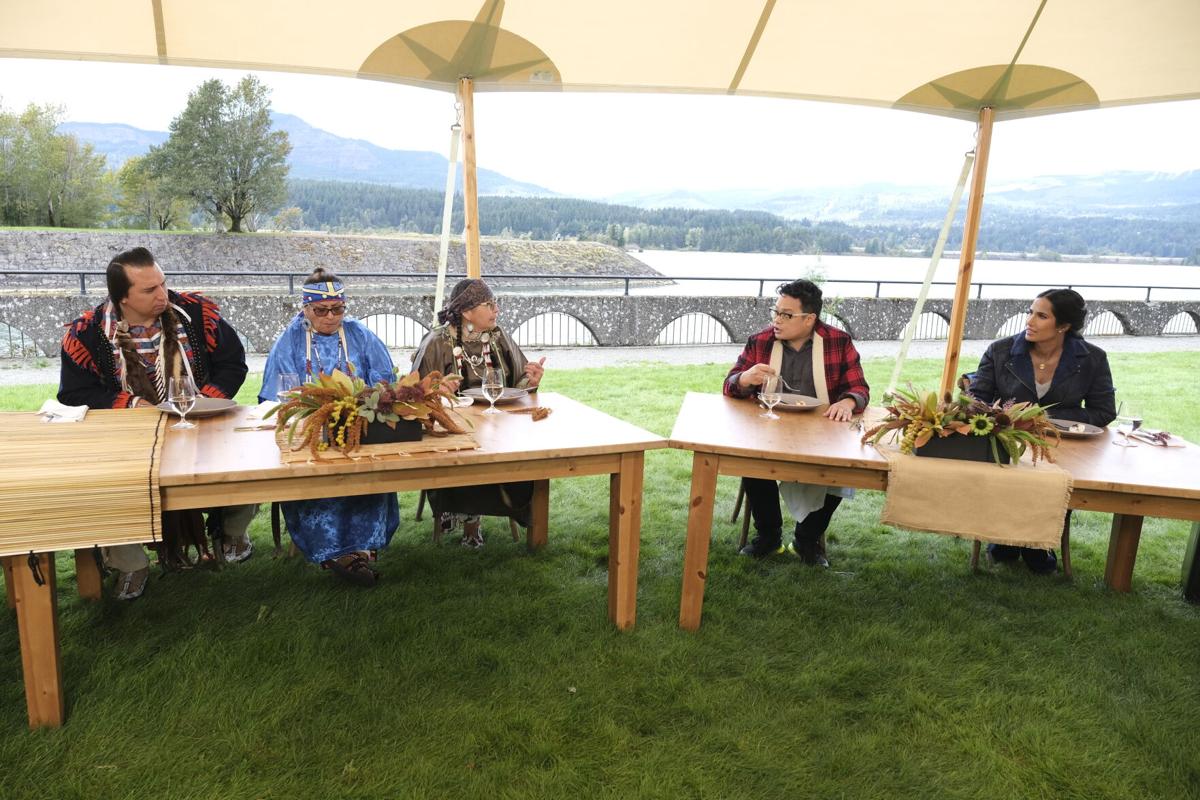 CTUIR Board of Trustees member Armand Minthorn, center, holds a plate during filming of an episode of “Top Chef” in Cascade Locks last year. Also pictured are Board of Trustees Chair Kat Brigham, left, and Vice Chair Jeremy Wolf.

From left to right: Linda Jones, a member of the CTUIR; Roberta Kirk, a Warm Springs member; Wenix Red Elk, a CTUIR member and CTUIR Department of Natural Resources public outreach and education specialist; and Terrie Brigham, a CTUIR member, and owner of Brigham Fish Market in Cascade Locks participate in filming of an episode of “Top Chef” in Cascade Locks last year.

CASCADE LOCKS — For its 18th season, “Top Chef” tried to make the most of its Oregon location.

Throughout the reality cooking show competition, chefs from around the country were asked to cook with craft beer from Portland, fruit from Hood River and wine from the Willamette Valley.

But for the season’s sixth episode, which premiered on Thursday, May 6, the production ventured from Portland to Cascade Locks, where contestants were challenged to work with ingredients that predate Oregon’s status as an American territory, much less a state — the Confederated Tribes of the Umatilla Indian Reservation’s First Foods.

The First Foods — water, fish, wild game, roots and berries — are not only cuisine, but a fundamental aspect of life for the Umatilla, Walla Walla and Cayuse peoples since “time immemorial,” a collection of foods that inform the Tribes’ yearly activities and rituals and a motivating factor in the CTUIR’s environmental protection efforts.

Behind the scenes with the CTUIR

During the first half of the episode, the chefs blindly selected a knife labeled with a fish or meat, and then were ordered to pair with another contestant to make a surf and turf dish revolving around the theme of First Foods.

Several chefs remarked about the pressure they felt, not only to please the judges and advance to the next round of the competition, but also to honor the Brighams and the CTUIR’s culture and heritage.

“At the end of the day, we have to cook for the judges, but I need to pay homage to these people,” Maria Mazon, a chef from Tucson, Arizona, said during the show. “I feel blessed.”

The contest opened and closed with Armand Minthorn, a member of the CTUIR Board of Trustees and a tribal elder, who delivered a Washat prayer to begin proceedings, and then made some remarks as it drew to a close.

“When those Indian foods began to grow, they prepared themselves for today,” he said. “And because you cooked our food, our food knows who you are now. You’ve honored us today.”

Two days worth of events at Cascade Locks were edited down to 45 minutes, but the slickly edited package belied the months of preparation and coordination between Magical Elves, the production studio behind “Top Chef,” and the CTUIR.

Doneen Arquines, a producer with Magical Elves, said the process started when “Top Chef” began scouting locations after committing to basing their 18th season in Portland.

“Top Chef” soon connected with Brigham Fish Market, a Cascade Locks business run by sisters Terrie Brigham and Kim Brigham Campbell, who are both enrolled members of the CTUIR.

As the producers learned more about the sisters and the Tribes, they decided to expand their focus to encompass the Tribes and the First Foods.

Magical Elves reached out to the CTUIR in early 2020 and eventually connected with Wenix Red Elk, a public outreach and education specialist for the CTUIR Department of Natural Resources.

Red Elk said she and a group of tribal members went out and gathered roots and berries for the production, eventually providing “Top Chef” with First Foods like duck potato, elderberries, huckleberries and chokecherries.

Red Elk said she requested Pacific lamprey be included as one of the ingredients, but with fresh lamprey unavailable in September when the episode was shooting, the show decided to substitute catfish for lamprey.

The production crew also wanted fish from Brigham Fish Market and to film a fishing session with the sisters. But with filming coming relatively late in the season, Terrie Brigham said they couldn’t provide whole fish that time of year and opted to do a fishing demonstration instead.

The CTUIR sent a contingent of tribal leaders to Cascade Locks for the filming of the episode, providing the contestants and the television audience with an introduction to First Foods, and then tasting the completed meals along with the judges the following day.

Filming in the midst of the COVID-19 pandemic, “Top Chef” had strict protocols for its Portland season. All contestants stayed in a bubble at their hotel when not on location, and all guests, including the CTUIR members, had to test negative multiple times and self-quarantine before arriving.

The production also had to deal with the temperamental weather of the Columbia River Gorge.

Cascade Locks experienced heavy rain on the first day of filming. Arquines said they had to scrap plans to film on nearby Thunder Island and instead relocated most proceedings to a riverside tent.

“Top Chef” got some karmic balance when the second day of filming included sunny skies and a rainbow, but Terrie Brigham was caught off guard in a different way.

Brigham said she arrived on set unaware that she would be on camera with the rest of the CTUIR group. She hadn’t dressed in tribal regalia like the rest of the members present, but she decided to go with the flow.

“There I sat, in my sweatshirt and my hair pulled back,” she said, laughing.

Kat Brigham, the chair of the CTUIR Board of Trustees and Terrie’s mother, said the food was delicious but prepared very differently than what the tribal members are used to.

The winning dish was a smelt-crusted rabbit loin, while other cooking teams paired their dishes with molé, a Mexican marinade and sauce.

The episode ended with two chefs eliminated from the competition, but Arquines hoped the viewers took away something deeper.

For the Tribes, they got the chance to share with a potential audience of millions the importance of First Foods and the tribes that they feed.

“We learned a little bit more about how ‘Top Chef’ operates and all the processes that they go through,” she said. “But they also learned from us about our tradition, our first foods. I think it was a good day for all of us.”

Red Elk remembered when Mariah Watchman, an enrolled member, competed on American’s Next Top Model in 2012, and the Tribes organized watch parties. The pandemic meant there will be no watch parties, but Red Elk was still excited to see the result.

“It’s really exciting to watch it,” she said in an interview before the episode aired. “We’re going to tell a little bit about where our foods are coming from and highlight the Tribes.”