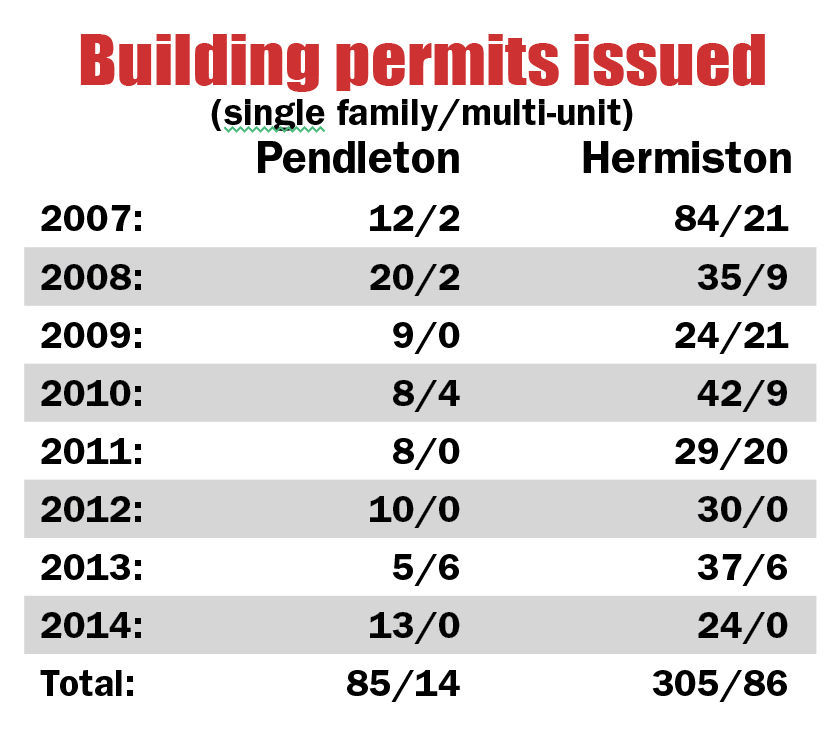 As Hermistons population shot up in the last decade, its housing market has followed a more gentle incline.

Angelica Garcia, a broker at American West Properties, said Hermistons housing market wasnt hit nearly as hard by the recession as other areas. Instead, prices stayed relatively stable and Hermiston continued to build new homes when construction in other cities plummeted.

She said right now Hermiston is a sellers market overall, but American West Properties still has some inventory in each price range.

Garcia said buying a home in Hermiston is in some cases easier than renting. A renter has to have the cash for a deposit and first and last months rent. But Hermiston qualifies for the USDAs rural housing loan program, which covers the entire cost of a house.

They can get 100 percent financing, they dont have to come in with a down payment and closing costs can be negotiated so that the seller pays for them, Garcia said.

Donn Walls, owner of Hermiston Realty, also emphasized that some people are better off buying than renting in Hermiston. Walls sells homes but also does property management, and he said right now in Hermiston its difficult to find a house or apartment to rent.

The rental market is really tight right now, he said. If its empty today, its going to be full tomorrow.

He said right now the housing market in Hermiston is very good thanks to the citys growth and economic development. Prices have risen to pre-recession levels and Walls estimated a $180,000 home 10 years ago would be worth about $210,000 today.

In the past seven years, Hermistons building department has issued permits for 305 new houses and 60 apartment units. Meanwhile the citys population has increased by just over 1,800. The result: One housing unit built for every five new residents.

Even Hermiston School District is getting in on the action. The district is starting an 11-home housing development next to Armand Larive Middle School next year. The plan is for students in the homebuilding program to construct one house every year.

Building a housing development in Hermiston is no slam dunk, however. In 2004 the Hermiston City Council voted to extend the citys urban growth boundary to include some 400 acres north of Feedville Road near Highway 207. The land was meant for a golf course and new housing development but both have yet to materialize.

The property, known as Desert Falls Estates, is being marketed online for $3.25 million after the previous owner lost it to foreclosure in 2010. The listing says it is fully graded and sculpted for 250 homes, an assisted living facility, a hotel and golf course.

On the low income side, Hermiston has plenty to offer. The majority of the properties listed by the Umatilla County Housing Development, which administers federal housing programs in the county for HUD, are in Hermiston. The complexes listed represent 246 units with income restrictions.