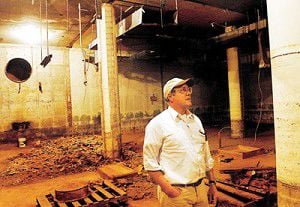 Ufologist Peter Davenport stands in the control room of a former nuclear missile base that is now home to the National UFO Reporting Center's files just outside Harrington, Wash., October 9, 2007. <i>Associated Press</i> 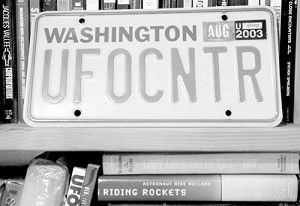 Ufologist Peter Davenport stands in the control room of a former nuclear missile base that is now home to the National UFO Reporting Center's files just outside Harrington, Wash., October 9, 2007. <i>Associated Press</i>

To find the new home of The National UFO Reporting Center, you must go several yards underground at a former nuclear missile site in Eastern Washington.

The National UFO Reporting Center, which moved to this sparsely populated farm country from Seattle last year, is basically a telephone, tape recorder and desktop computer run in an underground bunker by one man who collects and publishes UFO reports from across the country.

Director Peter B. Davenport took over the UFO center's work from founder Robert J. Gribble in 1994. It had been located for years in Seattle's University District, until Davenport decided he wanted a change and paid $100,000 for the former Atlas missile site located about 50 miles west of Spokane.

"There was the allure of owning my own missile site," Davenport said.

"Longview, WA. February 25, 1999 1158 hrs. (Pacific) Description: Fourteen forestry workers witness a horseshoe shaped object lift an adult elk out of the forest and fly off with the apparently dead, or unconscious, animal."

The missile site covers 22 acres, and the massive concrete buildings are underground. The old Atlas E missiles rested flat, not upright in silos, in what were called "coffin launchers." In the event of war, a concrete lid would slid open, the missile would be hoisted upright and the engine fired.

The UFO files, along with some office furniture, are stacked in a dark, dank room the size of a basketball court, where the yellow missile hoist remains in place. A few bare bulbs provide lights.

Davenport is still cleaning out the missile site, which is pretty decrepit, and is living in an apartment in nearby Harrington while he works to make it habitable.

Davenport doesn't spend much time scanning the skies, or traveling to UFO locations. Most of his work is transcribing numerous calls or e-mails each day from people who think they have seen UFOs. He places those reports on the Web site for all to see.

Davenport also gives lectures and appears often on radio talk shows tied to UFOs. He considers himself among the most skeptical of ufologists, and estimates that 90 percent of the calls he receives can be quickly disproved, and many of the rest likely have a rationale explanation.

But that still leaves a lot of reports for which no terrestrial explanation is available, Davenport said.

Washington has a long history of UFO reports, including the famous Mount Rainier sighting in 1947 that led to the coining of the term "flying saucers." In that incident, pilot Kenneth Arnold reported seeing nine silver vehicles flying in formation at high speed and moving "like a saucer if you skip it across water."

Whether UFOs exist has been hotly debated for decades. Believers point to loads of evidence, including photos and eyewitness accounts. They contend there must be other inhabited planets, and some with more advanced civilizations may be visiting us.

Like many ufologists, Davenport also believes the world's governments and press are hushing up the existence of UFOs to avoid panic.

"There is nothing more bizarre in the galaxy than human behavior toward UFOs," he said.

Despite decades of official denials, UFOs abound in movies, television, books and advertising, he said. They even show up in religion, where some reports of visions have all the earmarks of a UFO sighting, Davenport said.

UFO skeptic Jim Oberg said Davenport performs a valuable service by recording all the strange things people see in the sky. The problem is that he and other ufologists are too quick to label them extraterrestrial, Oberg said.

That doesn't necessarily mean that aliens are not visiting Earth, Oberg said.

"But the evidence does not rise to the level of an unavoidable conclusion that there is no other explanation," Oberg said, acknowledging that the debate won't end anytime soon.

This month, actress Shirley MacLaine revealed that Democratic presidential candidate Dennis Kucinich saw a UFO at home in Graham, Wash. Representatives of Kucinich's presi- dential campaign and congressional office have not responded to requests for comments on MacLaine's recollection.

Last fall, numerous employees of O'Hare Airport in Chicago reported seeing a mysterious, saucer-shaped craft hovering over the airport. The workers said the object hovered over a terminal before shooting up through the clouds, according to the Chicago Tribune.

The Federal Aviation Administration said nothing showed up on radar, and that the sighting was likely a "weather phenomenon," the newspaper reported.