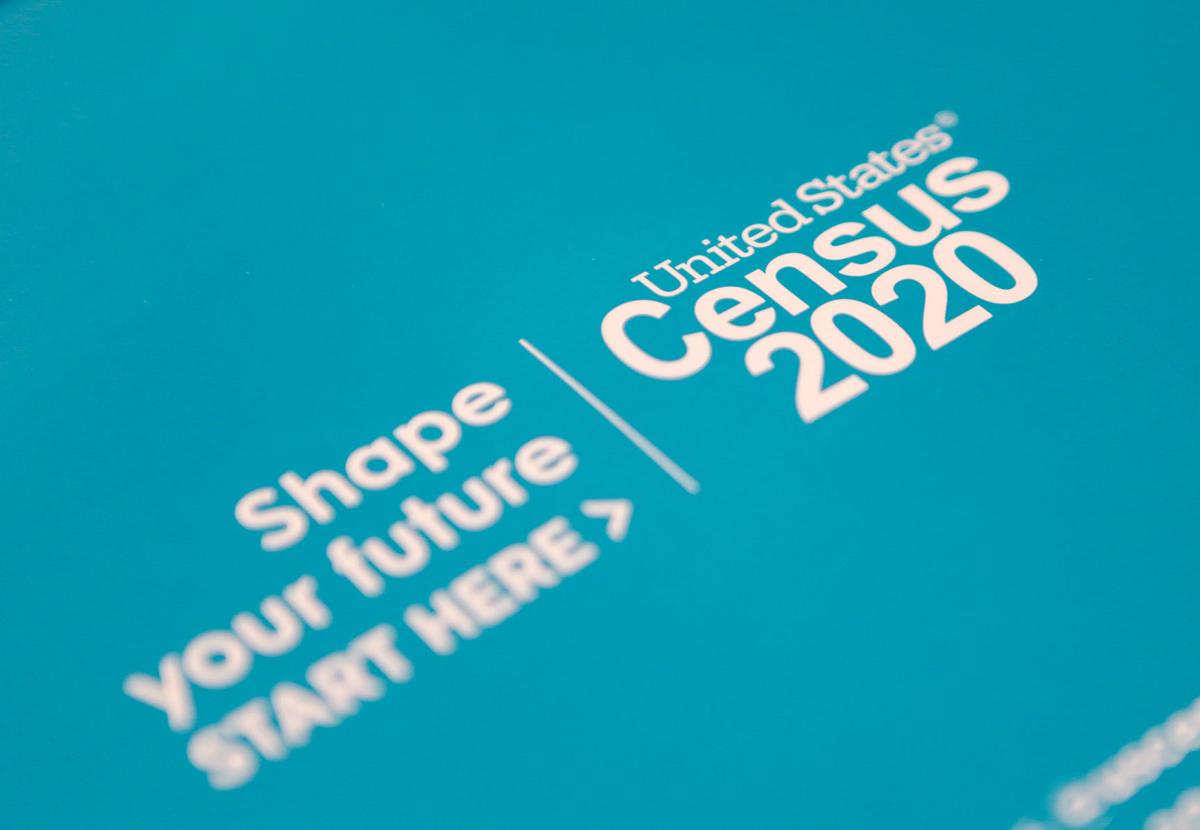 Census materials rest on a display table during a meeting of the Umatilla County Complete Count Committee at the Pendleton Convention Center in October 2019. 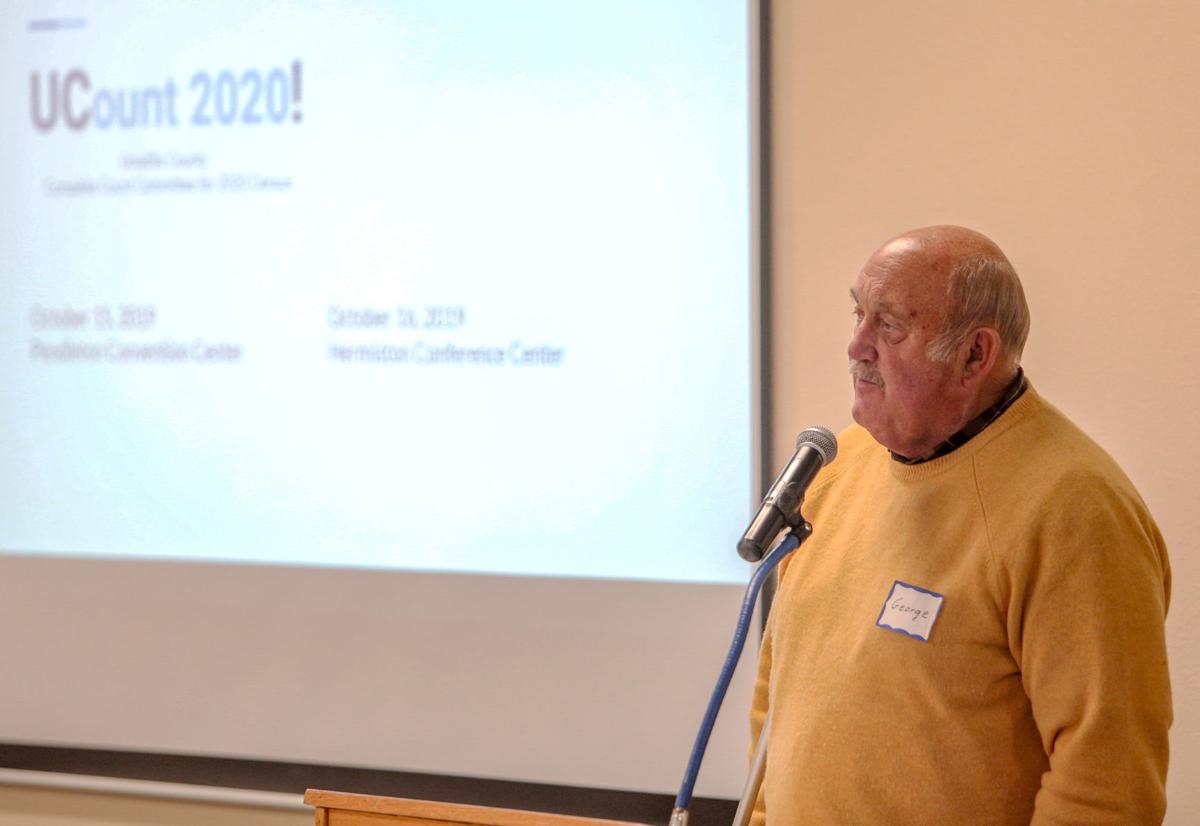 Census materials rest on a display table during a meeting of the Umatilla County Complete Count Committee at the Pendleton Convention Center in October 2019.

UMATILLA COUNTY — Portland State University’s 2019 population estimates identified an increase of 395 people in Umatilla County from 2018. But officials working to pin down a complete population count don’t think growth will end there.

“I’m optimistic,” said Umatilla County Commissioner George Murdock. “If we do our due diligence, I think we’ll find there are more people here than we think there are.”

Since 2018, dozens of local leaders have been brainstorming ways to get the word out about the 2020 U.S. Census through the Umatilla County 2020 Complete Count Committee — one of the first committees of its kind in the nation, according to Murdock.

Come April, census takers will hit the ground to track down those who have yet to respond to census correspondence via phone, mail or email.

Aside from yielding data that will impact where millions of federal dollars will go, it’s predicted that Oregon could gain a sixth seat in the U.S. House of Representatives due to an increase in population since 2010.

“That won’t really have much impact on us out here, but will I think it might help the state as a whole,” Murdock said.

According to Murdock, each person counted in the census across the county carries a price tag of $4,000 in program funding for public programs revolving around human services, health and housing.

It’s estimated, Murdock said, that about 70% of people will willingly fill out the census this year. The remaining 30% are considered members of different “hard-to-count” populations.

“It’s the young preschoolers, different ethnic groups and people that for one reason or another are anxious to be found,” he said.

In a county with an estimated population of 81,160, according to Portland State’s most recent figures, that means over 24,000 could remain in the shadows.

Murdock said through county-run programs, like post-prison supervision and public health services, about 2,500 of people who considered hard-to-count will likely be identified and given more access to the census form.

He added the county will also send information about the census to post office boxes across the county. Nationwide, he said mailers only go to home addresses.

“In terms of local flavor, there are whole communities who utilize the post office in Umatilla County,” Murdock said. “We’re trying to put a local face on the census.”

That also means hiring local people from a variety of backgrounds as census takers, he added.

Community Action Program of East Central Oregon, known commonly as CAPECO, is joining that complete count effort, and they’re bringing thousands of dollars to the table.

Paula Hall, chief executive officer of the organization, said CAPECO was recently approved for a $65,000 grant from the United Way of the Columbia-Willamette.

CAPECO estimates with the help of that funding, the organization could reach up to 7,000 people who otherwise may remain uncounted across Umatilla, Morrow, Gilliam and Wheeler counties.

“I’ve been with the organization almost 30 years and we’ve always understood the importance of it, we weren’t necessarily putting ourselves on the forefront,” Hall said.

But this year’s different.

“We plan on being quite mobile, we’re not going to be sitting in our office looking for folks,” Hall said. “It’s important now more than ever to get a complete count.”

CAPECO has identified three core groups that make up the hard-to-count population across its service area: people who don’t speak English, homeless people, and those who are home-bound.

“We already have dedicated staff tied to these communities,” Hall said.

She said people in these categories often rely on the services that CAPECO can provide, including energy and food assistance.

Staff already in contact with these communities will be utilized to get the word out through home visits, pop-up census stations across the four counties and drop-in locations in Umatilla and Morrow counties.

Hall said that CAPECO is well aware that some people may be weary of filling out their census forms.

There will be no question about citizenship on the census form, but in late December, the Department of Homeland Security stated that immigration agencies will share data with the U.S. Census Bureau, which will be used to create a statistical model to make estimates of how many U.S. citizens and noncitizens live in the U.S per President Donald Trump’s executive order.

The gumption to get a complete count isn’t so forthcoming in some areas. Just east of Umatilla County lines, Union County has yet to create a census committee. Union County Administrative Officer Shelley Burgess told the La Grande Observer recently that the county had no obligation to help the U.S. government conduct the census, and that staffing levels wouldn’t allow it anyway.

But head west, and it’s a different story.

According to PSU’s population estimates, the largest proportional jump in population between 2018 and 2019 statewide happened in Morrow County, which reportedly added 795 more people to its ranks.

It’s a level of increase that Morrow County Commissioner and Chair Melissa Lindsay said the county’s been waiting to see represented for a long time.

The county hopes to see the climb continue during 2020 census efforts. Lindsay said the county did form a census committee and is working with the Port of Morrow, utility companies and other industry partners to get the word out.

“We got a late start and are getting going,” she said. “I think our city and county leadership is passionate about getting an accurate count.”