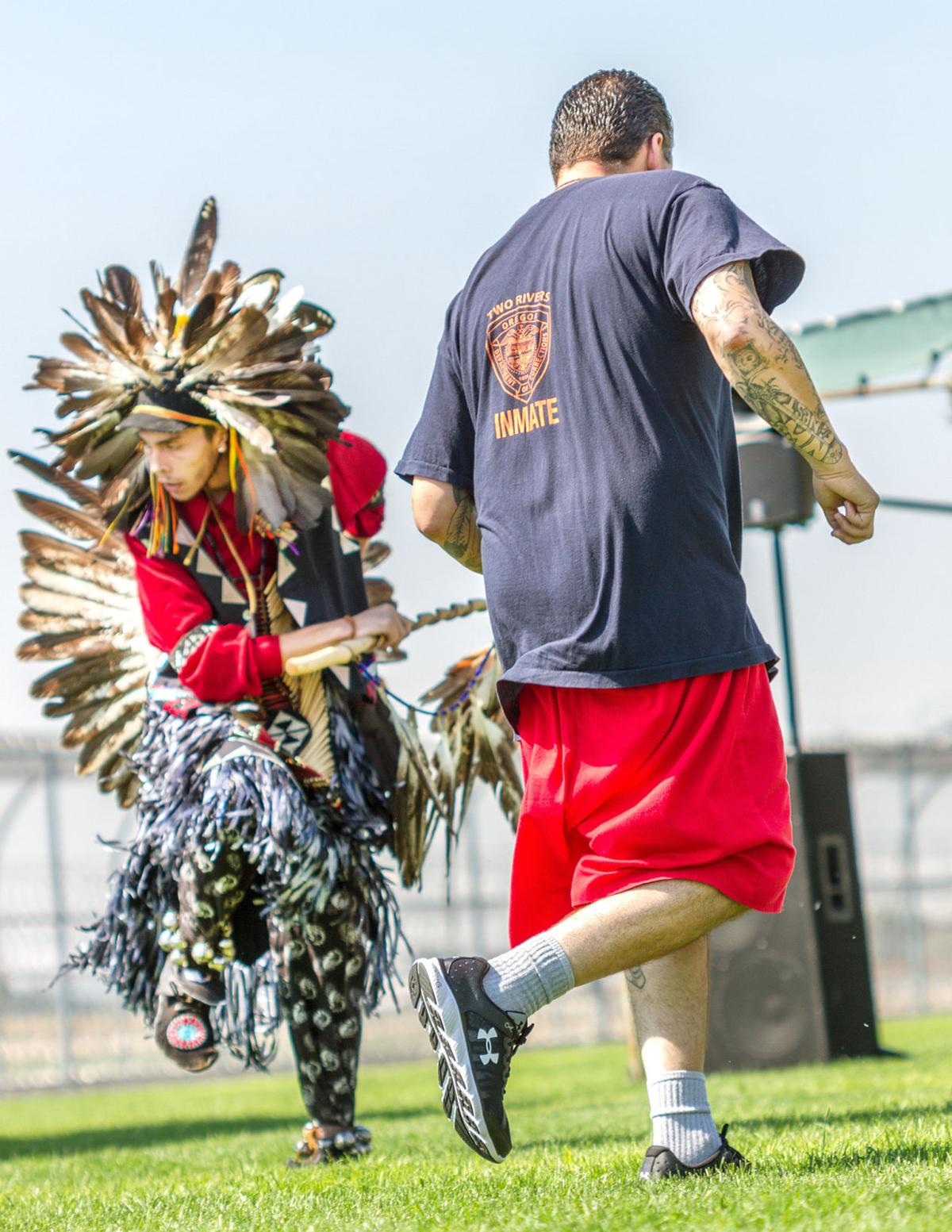 TRCI inmate Eagle Eye Leonard, a Cherokee Tribe member, dances with a visiting dancer during Saturday's powwow at the prison in Umatilla. 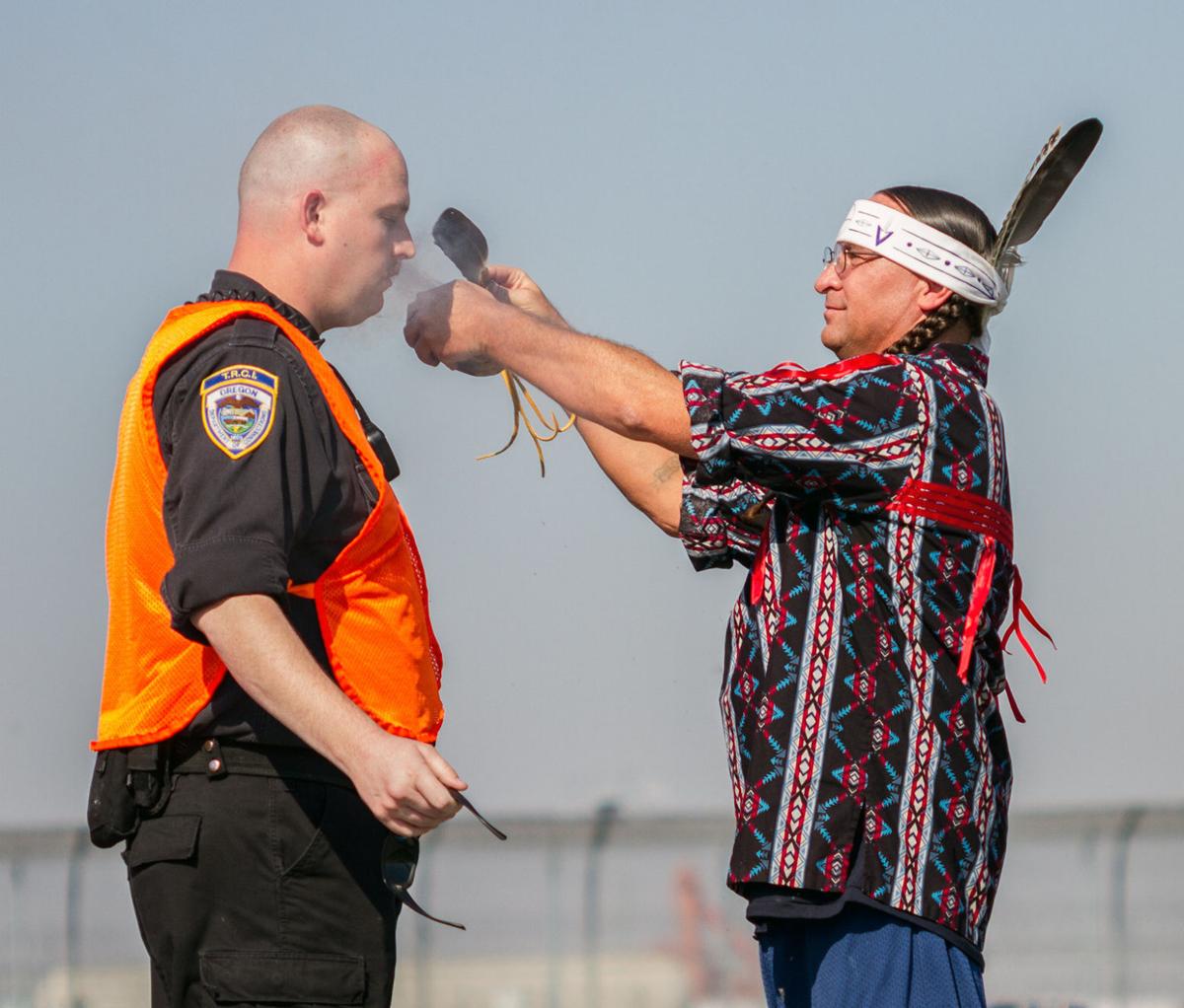 TRCI inmate Rick “White Eagle” Weaver uses a feather to waft the smoke of burning sage and sweetgrass into the face of Corrections Officer Key on Saturday before a powwow at the prison. The smudging ceremony uses burning herbs to purify and drive away negative energy. 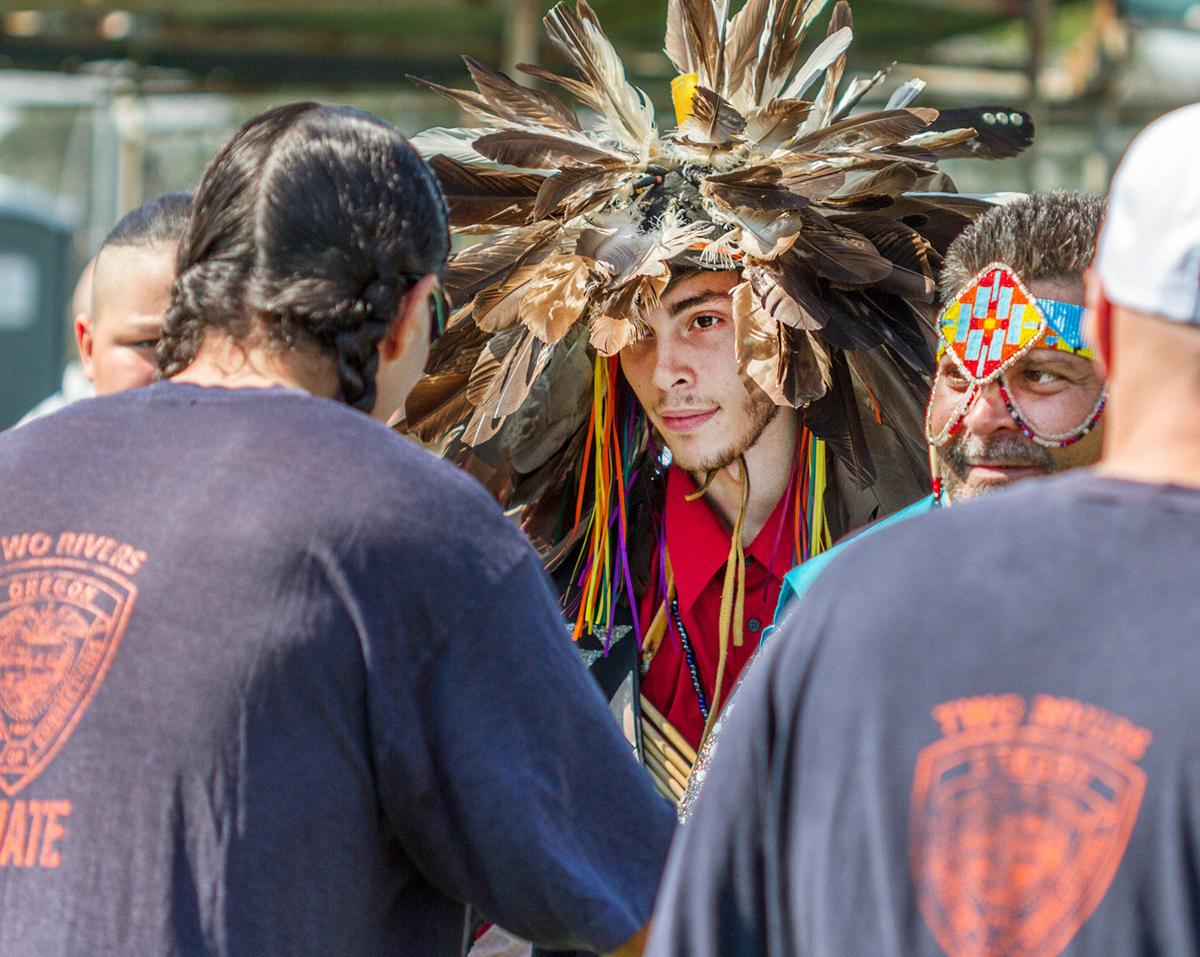 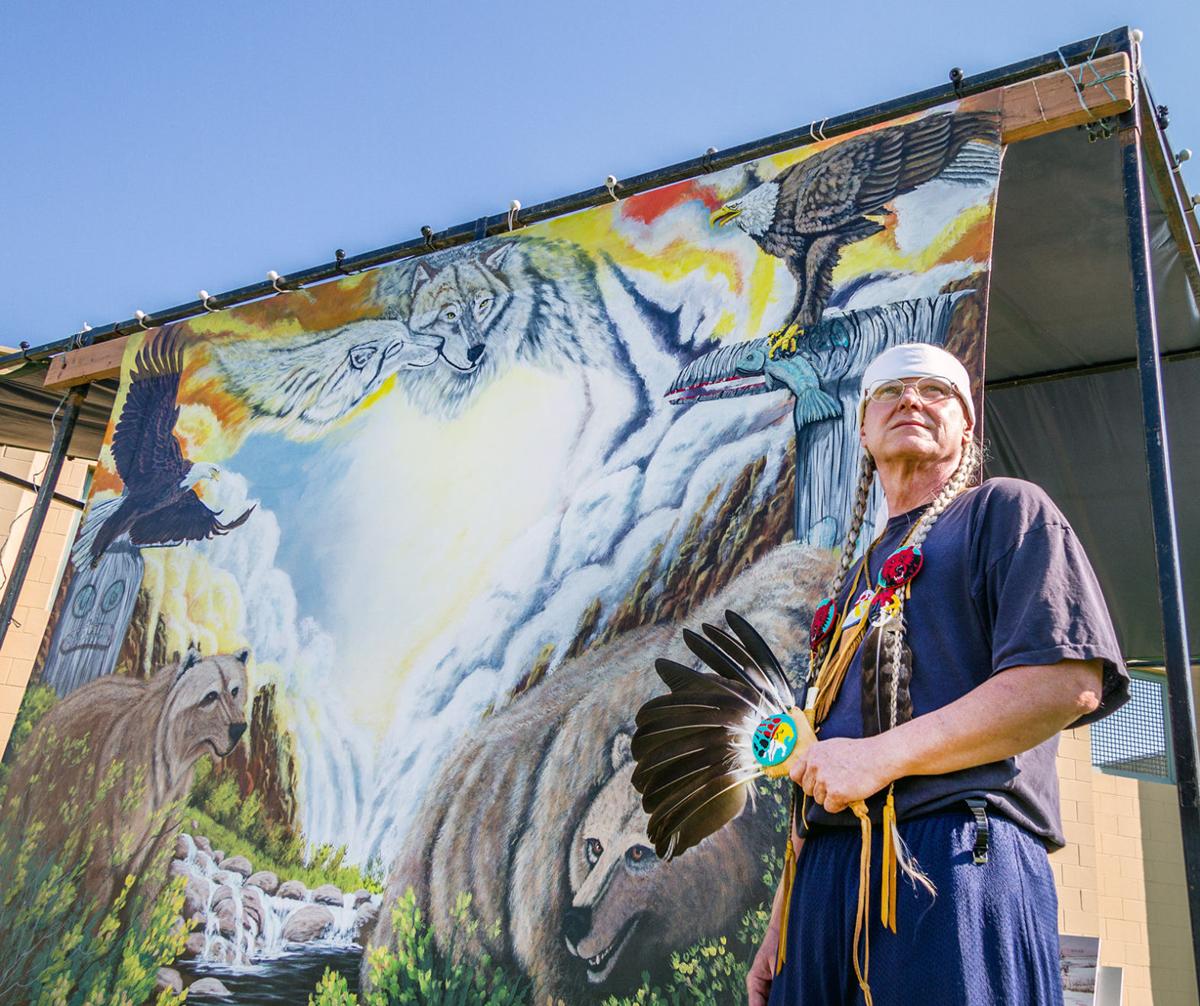 TRCI inmate Darren “Two Bears” OneAll stands near his painting, displayed in an art show at Saturday's powwow at the Umatilla prison.

TRCI inmate Eagle Eye Leonard, a Cherokee Tribe member, dances with a visiting dancer during Saturday's powwow at the prison in Umatilla.

TRCI inmate Rick “White Eagle” Weaver uses a feather to waft the smoke of burning sage and sweetgrass into the face of Corrections Officer Key on Saturday before a powwow at the prison. The smudging ceremony uses burning herbs to purify and drive away negative energy.

TRCI inmate Darren “Two Bears” OneAll stands near his painting, displayed in an art show at Saturday's powwow at the Umatilla prison.

Inmate Rick Weaver welcomed visitors to the second annual powwow at Two Rivers Correctional Institution by bathing them in a balmy, fragrant smoke made by burning dried sage and sweet grass in a small shell bowl.

The ceremony, known as smudging, is a custom of American Indian culture, done to purify the body and remove negative energy and spirits. Weaver, who is affiliated with both the Cherokee Nation and Lakota people, used a single eagle feather to waft the smoke over each individual, from head to toe.

More than 70 inmates and 65 guests attended Saturday’s powwow, with traditional drumming, dancing, food and gifts. The event was organized in large part by Red Lodge Transition Services, a nonprofit organization based in Oregon City that helps American Indians successfully reintegrate into society after leaving prison.

Weaver, who also goes by the name White Eagle, is serving 25 years at TRCI on two counts of robbery and attempted aggravated murder. His earliest release date will be in 2035.

Meanwhile, Weaver said he is trying to reform his life and be a positive influence within the American Indian population at TRCI. The powwow is one way inmates like himself can heal, he said.

“Having a powwow every year is special, to bring us all together,” he said. “It helps with our rehabilitation, completely.”

During the grand entry, inmates lined up and stepped in rhythm to the sound of the pulsing drum. Some dressed in full regalia while others remained in their blue TRCI-issued T-shirts and shorts.

Trish Jordan, a member of the Creek Tribe from Oklahoma, serves as director of Red Lodge Transition Services and has spent 17 years as a religious services volunteer for the Oregon Department of Corrections. She and fellow volunteers were hard at work Saturday morning preparing lunch, which included fry bread and traditional First Foods such as salmon, venison and huckleberries.

The powwow is a celebration of life, Jordan said, and offers a chance for American Indian prisoners to reunite with their families and reconnect with their culture.

“It’s important for these men to have that identity of who they are,” Jordan said. “They can hopefully carry that on outside this institution.”

American Indians make up an estimated 1.8 percent of Oregon’s population, yet account for approximately 6 percent of the state’s prison inmates, Jordan said.

“The disparity numbers are huge for Native Americans. It’s hard to find a native family that hasn’t gone through this,” she said. “We recognize the potential in people. We want to give them hope, that their life can be different.”

This year’s TRCI powwow also received a $1,500 grant from the Confederated Tribes of Siletz Indians, which went toward supplies for making homemade gifts and art, such as paintings, beadwork and dream catchers.

One large backdrop featuring bears, wolves and eagles was made by inmate Darren OneAll, affiliated with the Oglala Sioux Tribe of South Dakota. He wore a red ribbon shirt Saturday, which was provided by Red Lodge Transition Services, along with golden eagle feathers at the ends of his braids.

OneAll is serving at least 25 years at TRCI for charges stemming from a kidnapping and sexual assault case. His earliest release date has tentatively been set for 2033.

Hosting a powwow at the prison allows the inmates to be who they really are, OneAll said.

“You can’t even imagine how some of these guys feel out here today,” OneAll said. “You touch the ground, in a reverent way. You breathe the air, in a reverent way ... This is a fulfillment of who our ancestors were.”

Rick Emerick, TRCI recreation specialist, said the prison had been trying to get a powwow for 16 years prior to last year’s inaugural event. In order to attend, he said inmates have to be actively involved in American Indian culture.

Participation has been strong over two years, Emerick said, and they intend to carry on the powwow as an annual gathering.

“It’s not just an activity. It’s them getting back to their religion,” Emerick said. “I think, all in all, it’s gone very well.”