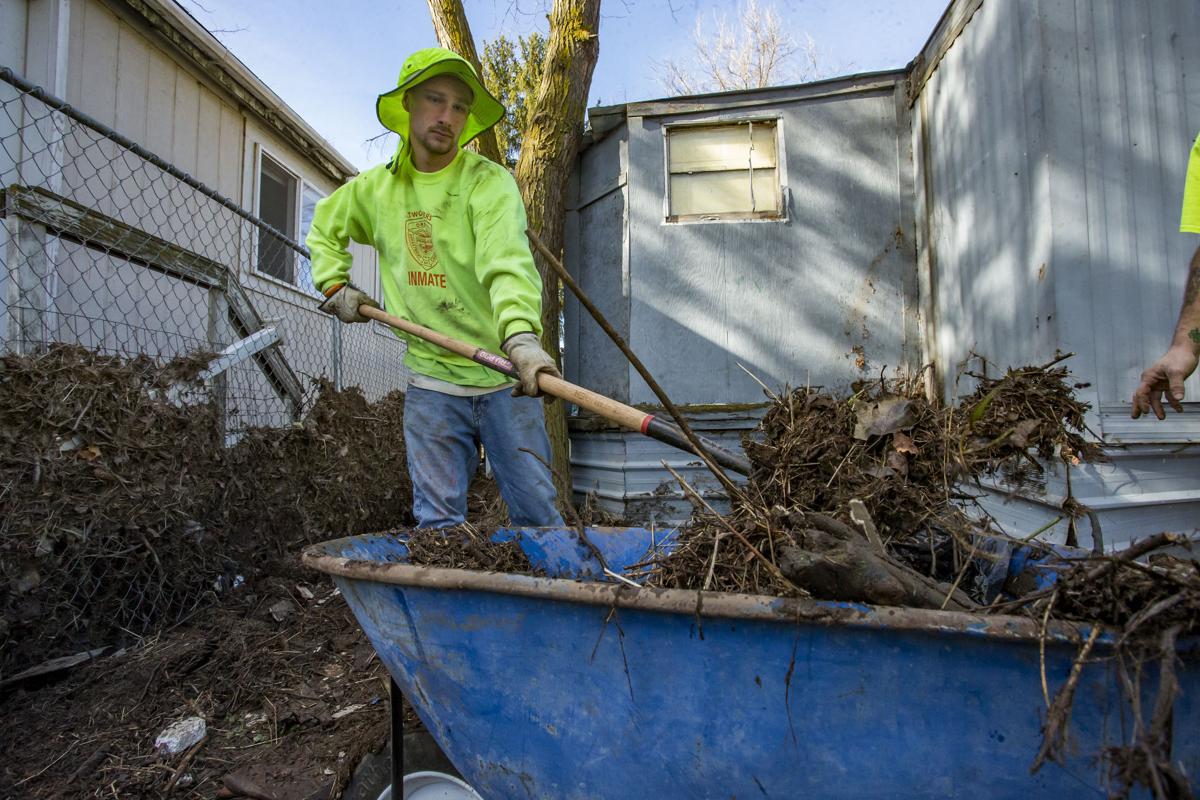 Jacob Barthel uses a pitchfork to load flood debris into a wheelbarrow at Riverview Mobile Home Estates in Pendleton on Wednesday. Bartho was one of 20 people on a Two Rivers Correctional Institution inmate work crew that traveled to the park to help with flood relief. 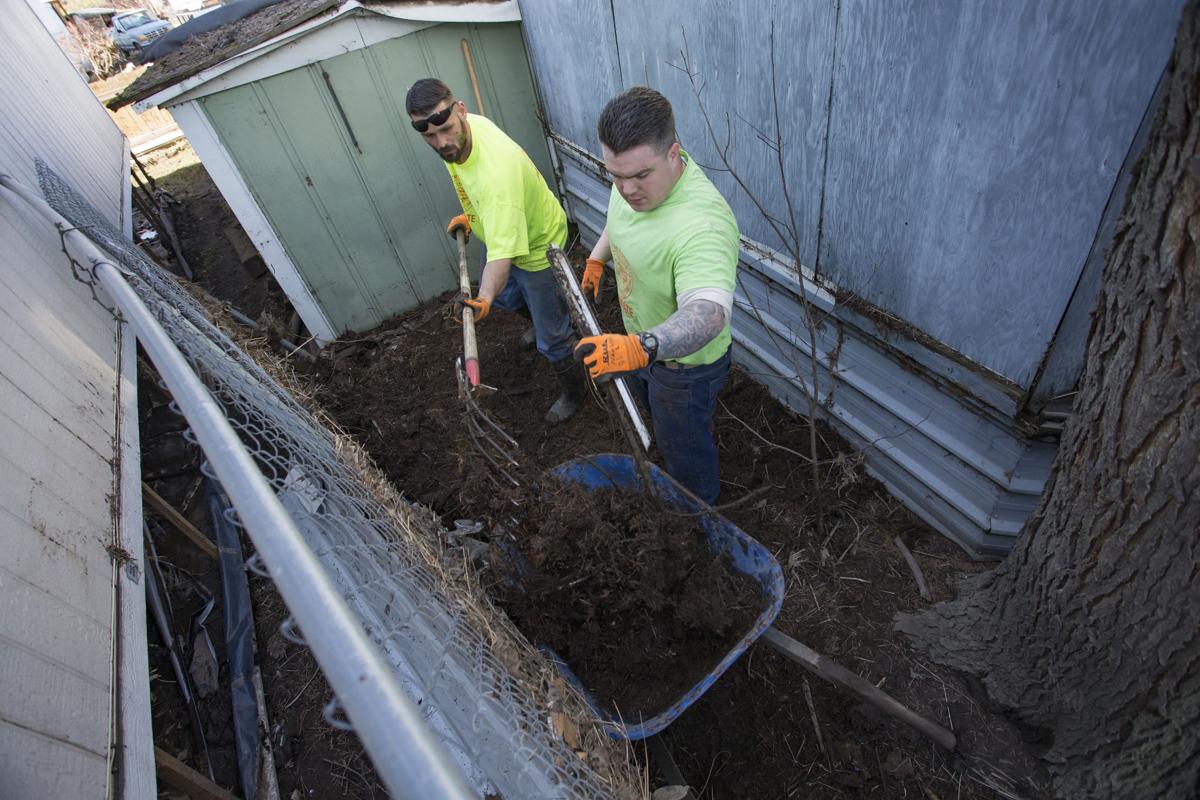 Zach Whitt, left, and Michael Moore clear flood debris from between homes in the Riverview Mobile Home Estates as part of a work crew from Two Rivers Correctional Institution on Wednesday in Pendleton. 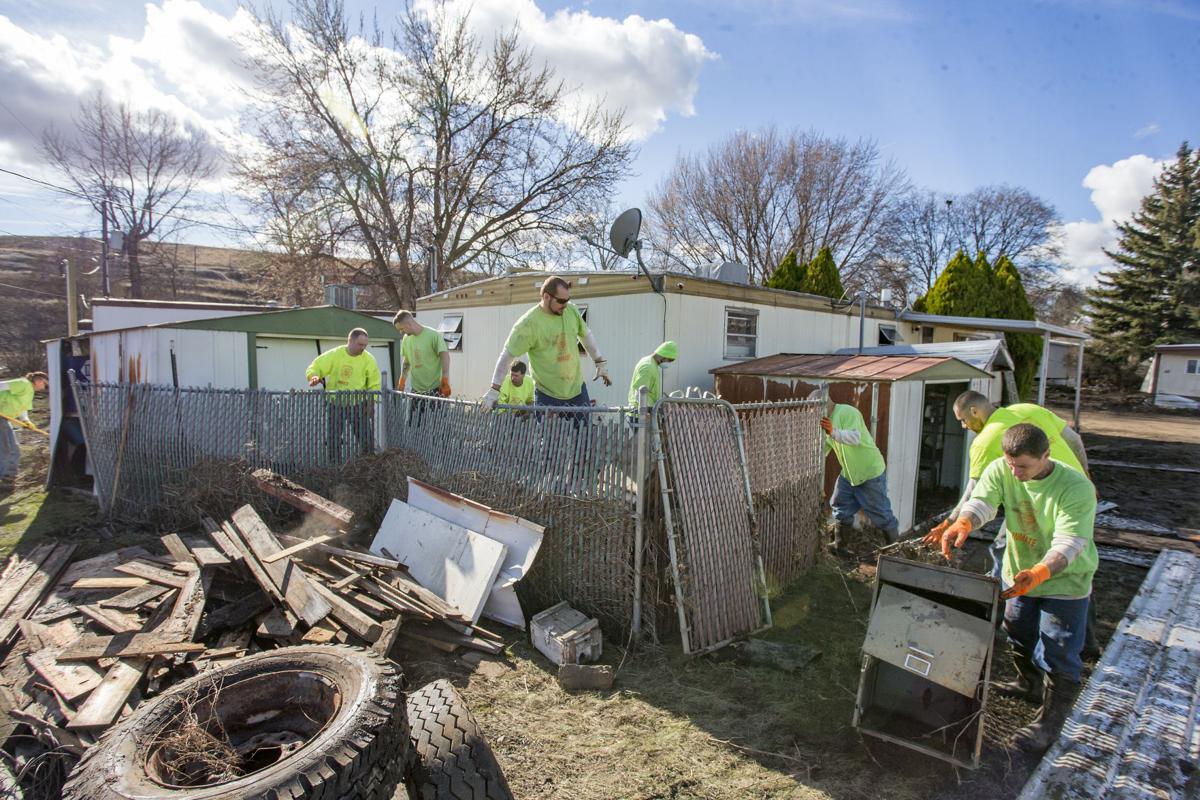 Members of a Two Rivers Correctional Institution work crew help clear flood-damaged material from a home at the Riverview Mobile Home Estates in Pendleton on Wednesday.

Jacob Barthel uses a pitchfork to load flood debris into a wheelbarrow at Riverview Mobile Home Estates in Pendleton on Wednesday. Bartho was one of 20 people on a Two Rivers Correctional Institution inmate work crew that traveled to the park to help with flood relief.

Zach Whitt, left, and Michael Moore clear flood debris from between homes in the Riverview Mobile Home Estates as part of a work crew from Two Rivers Correctional Institution on Wednesday in Pendleton.

Members of a Two Rivers Correctional Institution work crew help clear flood-damaged material from a home at the Riverview Mobile Home Estates in Pendleton on Wednesday.

“They were just appalled by the devastation,” Robertson said.

For the the rest of the week, two work crews consisting of 10 inmates each from TRCI are traveling from Umatilla to take part in cleanup efforts to recover from the devastation last week’s floods dealt to the Pendleton trailer park.

A heavy snowstorm in the Blue Mountains last week, followed by two days of rain and warming temperatures, created the worst flooding in at least 30 years in the city of Pendleton and other smaller communities in the area. The Umatilla River crested at more than 19 feet on the night of Feb. 6 — nearly four times the average height for that date — during the worst of the flooding, and multiple rivers in the area set records for their water level.

Oregon Gov. Kate Brown declared a state of emergency on Feb. 7 for Umatilla, Union, and Wallowa counties, which meant the Oregon National Guard could respond.

On Wednesday, the crews started on opposite ends of the park and began working alongside city employees, other volunteers and residents in pulling and shoveling out mud, garbage and debris from the previously flooded homes.

“There weren’t a lot of questions asked,” Robertson said. “They just got right to work.”

While the Oregon Department of Corrections typically contracts its TRCI work crews out to government agencies and other community service projects in the region, the flood cleanup crews were donated to aid in the community’s recovery efforts.

Dusti Hunter, the prison’s institution work program coordinator, said the initial idea came from a prison staff member. After getting the green light from the state, Hunter came down to Pendleton on Tuesday to meet with Pendleton Parks and Recreation staff and get a look at the trailer park in order to get a plan in place.

As they normally do for their labor on work crews, Hunter said the inmates will still receive minimal compensation in the form of credits that can be used for phone calls and items in the prison’s commissary.

Work crew programs generally are designed to provide inmates with learning opportunities and experience that they can use when they’ve been released, Hunter said, and this week’s cleanup crews are no different.

“They’re getting familiar with how to coordinate an activity and work as a group to reach an outcome that looks like what they intended it to be,” she said.

In this instance, Hunter highlighted that the work crews will also benefit from seeing their hard work helping those who badly need it.

“They know that the state is doing it for the community, and that makes them feel good,” Hunter said of the work crews. “Knowing that they’re providing some help that allows them to say, ‘I did that. I helped them.’”

“It’s a blessing just to be out here and able to help these people,” said TRCI inmate Michael Moore.

The devastation witnessed at Riverview was personal to some, too.

Prior to being incarcerated, Moore lived in Pendleton and said he had a friend who had been living in the trailer park. Moore’s mother told him earlier this week that the friend’s home had been damaged in the floods.

Homeowners in Riverview were happy for the help. Both Robertson, who supervised one crew, and Corrections Officer Sandra Post, who supervised the other, said the residents were nothing but receptive to the help.

“We’ve heard nothing negative so far,” Post said. “People are telling us how happy they are to see us and to have us here.”

Mark Holmquist, who works with Pendleton Public Works, spent Wednesday at Riverview contributing to the cleanup efforts. He’s seen firsthand that many of the park’s residents are elderly, have disabilities or had homes that were so severely damaged they’ll need help in order to recover.

“Many of these people have no means or ways to do this themselves,” he said. “It’s just so good to have all these hands.”

The crews of inmates worked under the sun Wednesday, as they helped clear the trailer park of the flood’s wreckage. Hunter said the plan is for crews to be back out in Pendleton on Thursday and Friday, with a few days at the start of next week likely, too.

“It’s been really good so far, it’s just a slow process,” Holmquist said. “There’s a lot to do.”

PENDLETON — Team Rubicon, a national nonprofit organization aimed at using disaster response as a means to reintegrate American military veterans back into civilian life, is on the ground in the region to help with flooding recovery efforts.

According to the Umatilla Flood Joint Information Center, 40 volunteers are in Umatilla County with their priority being damage assessment. Once the assessment is complete more intense recovery work will begin.

The operation is expected to last 14 days.

Working in conjunction with state and local authorities, Team Rubicon volunteers will conduct site surveys and debris management in the homes in the communities affected by the recent flooding. Team Rubicon will help the county map the disaster, while also assisting with spontaneous volunteer management. Team Rubicon performs its services at no cost to those affected, thanks to the generosity of donors.

“Team Rubicon volunteers responded to Umatilla County in April 2019 due to flooding. We are eager to return and begin assisting these communities immediately as our teams are ready to put their skills to work,” said Stephanie Bishop, public information officer with Team Rubicon. “While volunteers are helping in Umatilla, there will also be additional volunteers in the Walla Walla, Washington, area doing recon to determine how to assist in their community.”