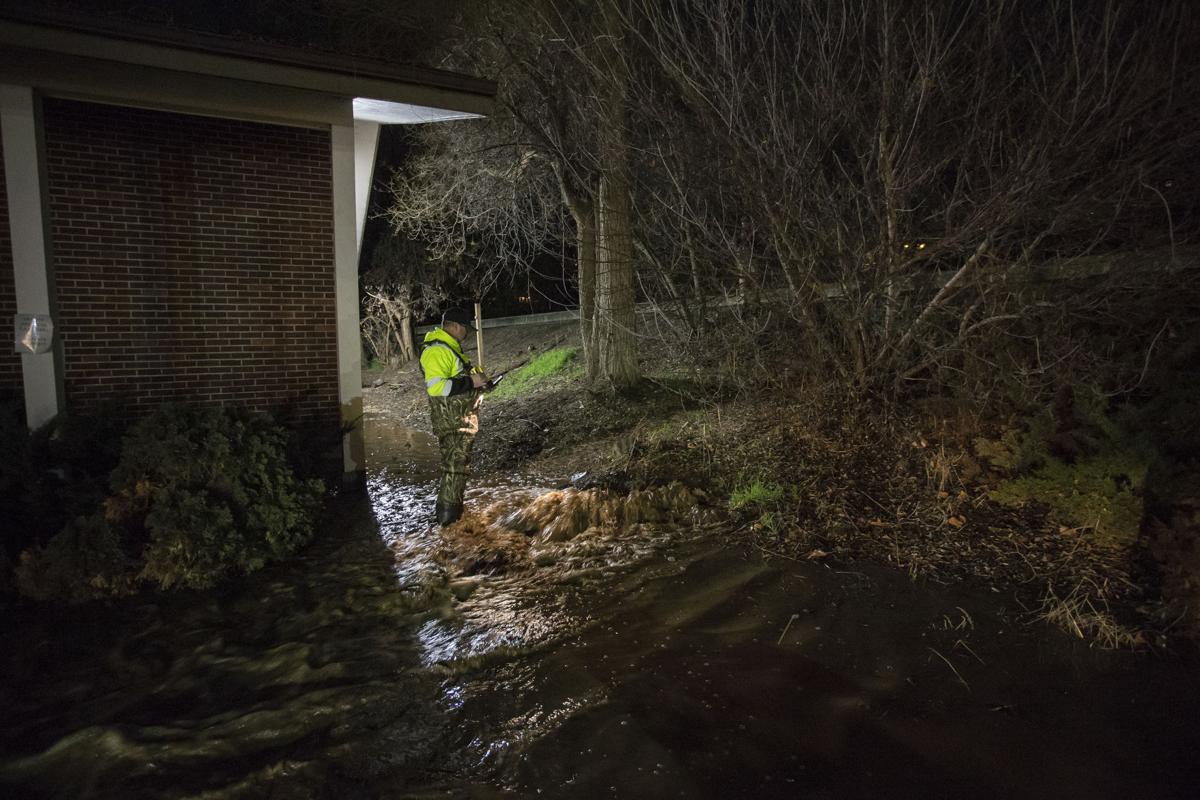 Pendleton Public Works crews respond to a break in the levee behind the East Oregonian offices in Pendleton on Friday night. 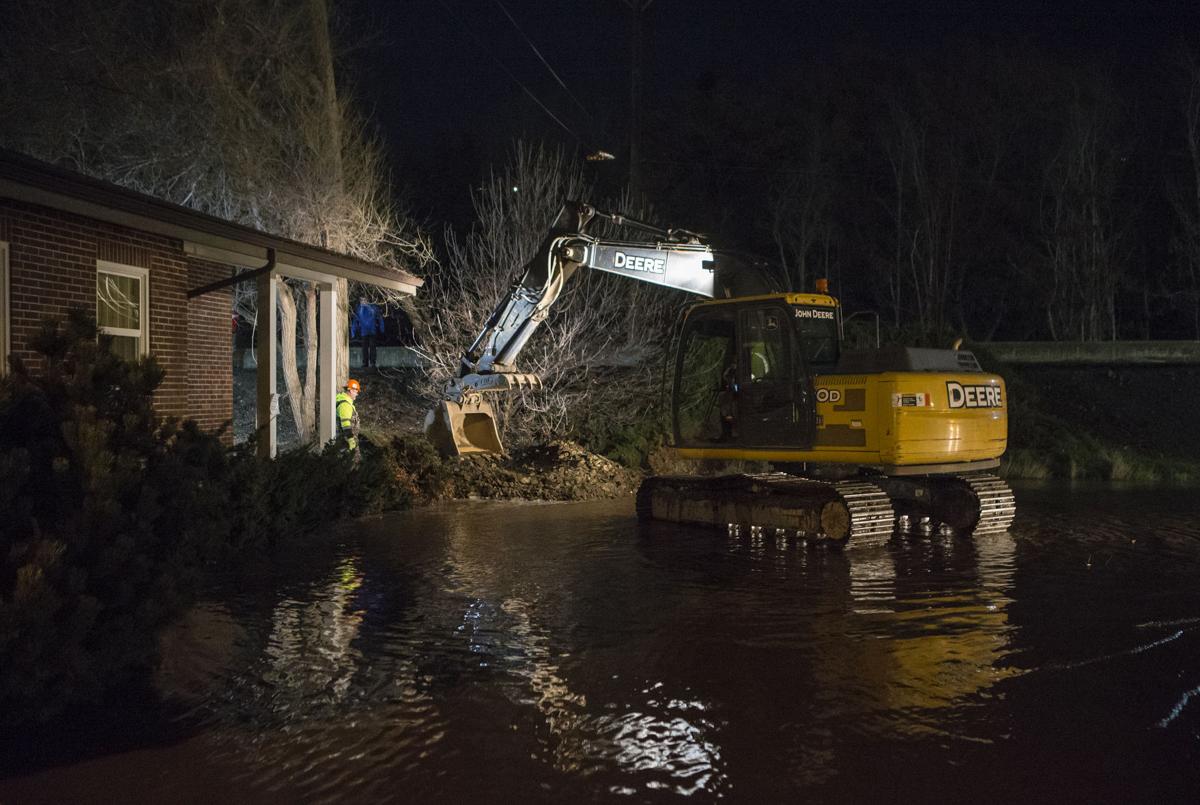 Pendleton Public Works crews use an excavator to pack gravel and rock into a hole in the levee behind the East Oregonian office in Pendleton.

Pendleton Public Works crews respond to a break in the levee behind the East Oregonian offices in Pendleton on Friday night.

Pendleton Public Works crews use an excavator to pack gravel and rock into a hole in the levee behind the East Oregonian office in Pendleton.

PENDLETON — The Pendleton City Council voted to declare an emergency on Friday morning, coming to terms with the fact that a significant portion of their city was underwater.

Pendleton city staff didn’t need to describe the extent of the flooding to the council, because it was all captured on video with the help of a drone — the swollen Umatilla River surrounding the trees that once marked its bank, the Riverside neighborhood partially submerged in water, the overturned travel trailers at the Keystone RV Co. facility.

Before the council unanimously approved the emergency declaration, City Manager Robb Corbett read from a prepared statement, his voice occasionally wavering as he delivered the facts and figures.

Corbett said this week’s flood was far more damaging to property than the McKay Creek flood in April.

“At the high water mark, which was 19.2 feet, the river was flowing at 20,300 (cubic feet per second),” he said. “Records show that the historical high flows were 13,000 cfs in 1965. The hardest hit areas are Riverside and the industrial area around Murrieta Road. I estimate there are 100 residents that have been displaced from their homes.”

Despite the flood’s disruption, Corbett said key city infrastructure held up, a factor Public Works Director Bob Patterson elaborated on in an interview later in the day.

Patterson said the floodwater did not breach the city’s levee, although there was seepage along several points.

The most notable seeping happened behind the East Oregonian’s Southeast Byers Avenue office on Thursday night.

EO Publisher Chris Rush said a mailroom employee first noticed some water in the parking lot around 8 p.m., but it wasn’t long before the whole back parking lot and the surrounding streets were covered in water.

As the water inched toward the building’s back entrances, Rush said he was prepared to shut down the facility, putting the newspaper’s production in jeopardy.

As they communicated with the city, East Oregonian staff were eventually able to flag down a police officer around 9 p.m., and public works staff were soon on the scene.

Patterson said the section of the levee behind the EO was built on top of an old race mill that channeled water toward the office once the flood began.

The waters began to recede as soon as public works staff tamped down the area with dirt.

The city’s bridges also withstood the river’s surging current and the debris, a combination that can destabilize and even break those kinds of structures.

Patterson said the bridges that cross the river at Eighth Street, Main Street, and 10th Street were fine, although the 10th Street Bridge was temporarily closed as the city dealt with a floating tree that got stuck and tangled its branches with overhead power lines.

The Bedford Bridge, a thin pedestrian bridge west of 10th Street, was hit hard by the flooding and remains closed as of 5 p.m. Friday.

Patterson said the sewer plant at the confluence of the Umatilla River and McKay Creek is inundated with water, but operational. He worried that the excess water may have washed out the “bugs,” the microscopic organisms that help treat the water.

In a bit of irony, the public works department had recently completed a set of repairs meant to fix damages caused by April’s McKay Creek flood.

“We’ll find out how well our repairs hold out,” Patterson said.

Throughout the day, city officials said the water from the municipal drinking water system remains safe to drink, although some odor and murkiness is to be expected and could last through Sunday.

At a press conference, Police Chief Stuart Roberts told the assembly that he hoped to let Riverside residents back into their homes on Saturday. He recalled how police helped most residents to safety before the waters rose too high, but the city was forced to put several in the bucket of a frontloader to get them out.

This is the second time in less than a year that Pendleton has been battered by floods, following last April’s McKay Creek overflow.

With a river running straight through the heart of the community, Pendleton is no stranger to floods.

Back in 1906, a flood washed away large portions of the city’s fledgling levee, blanketing about a third of the town in water.

In late 1964 and early 1965, a severe rainstorm destroyed bridges and washed out roads across the region.

At the press conference, Umatilla County Sheriff Terry Rowan said this is the worst flood he’s seen since 1996.

That year, low level snow packs released up to 10 inches of water in as little as 48 hours, leading to floods around the state. Riverview Mobile Home States was flooded that year as well.

Local officials seemed optimistic that declining water levels would allow them to reopen roads and neighborhoods over the weekend. But the next stage of work begins once the water recedes and people find out what the floods left behind.

[EDITOR'S NOTE: This story has been changed to reflect a correction. East Oregonian staff started noticing flooding in their parking lot around 8 p.m. and flagged down a police officer for assistance at 9 p.m.]

Our view | We’re all in this together