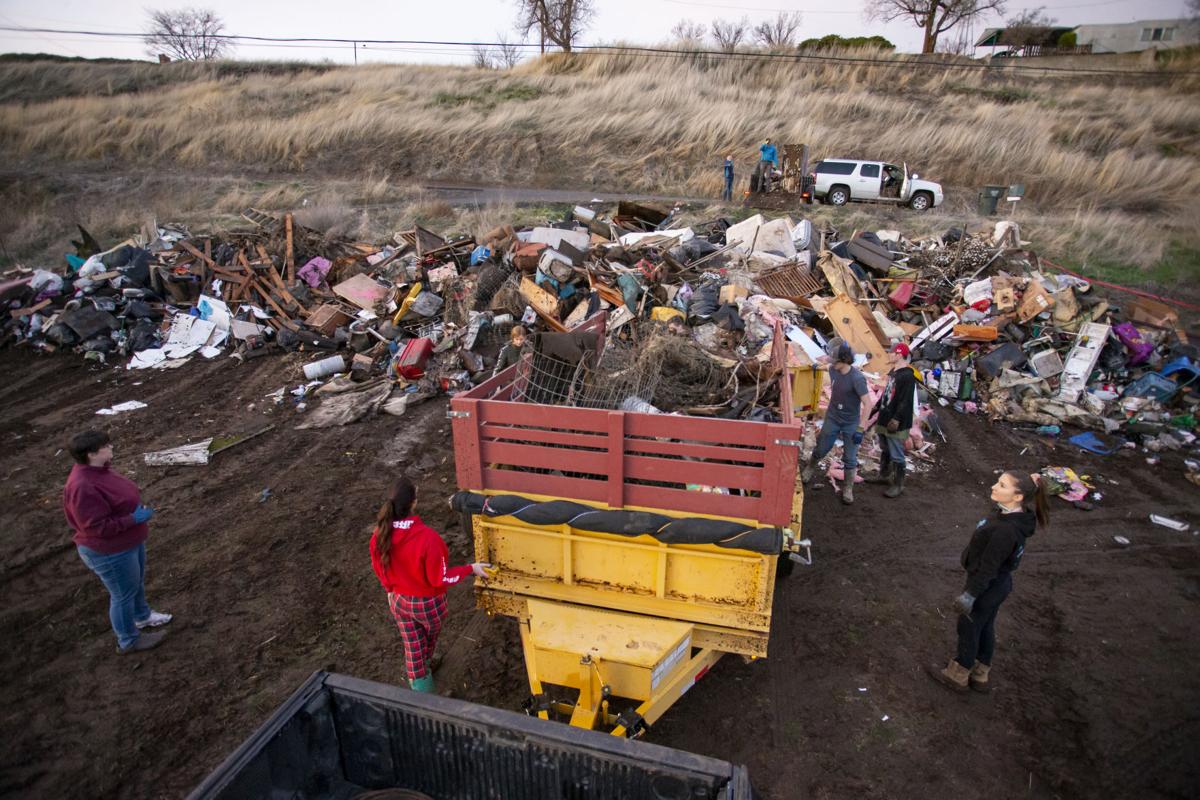 Volunteers dump a trailer at the temporary dump site in the Riverside neighborhood during cleanup efforts at the Riverview Mobile Home Estates in Pendleton on Sunday afternoon. 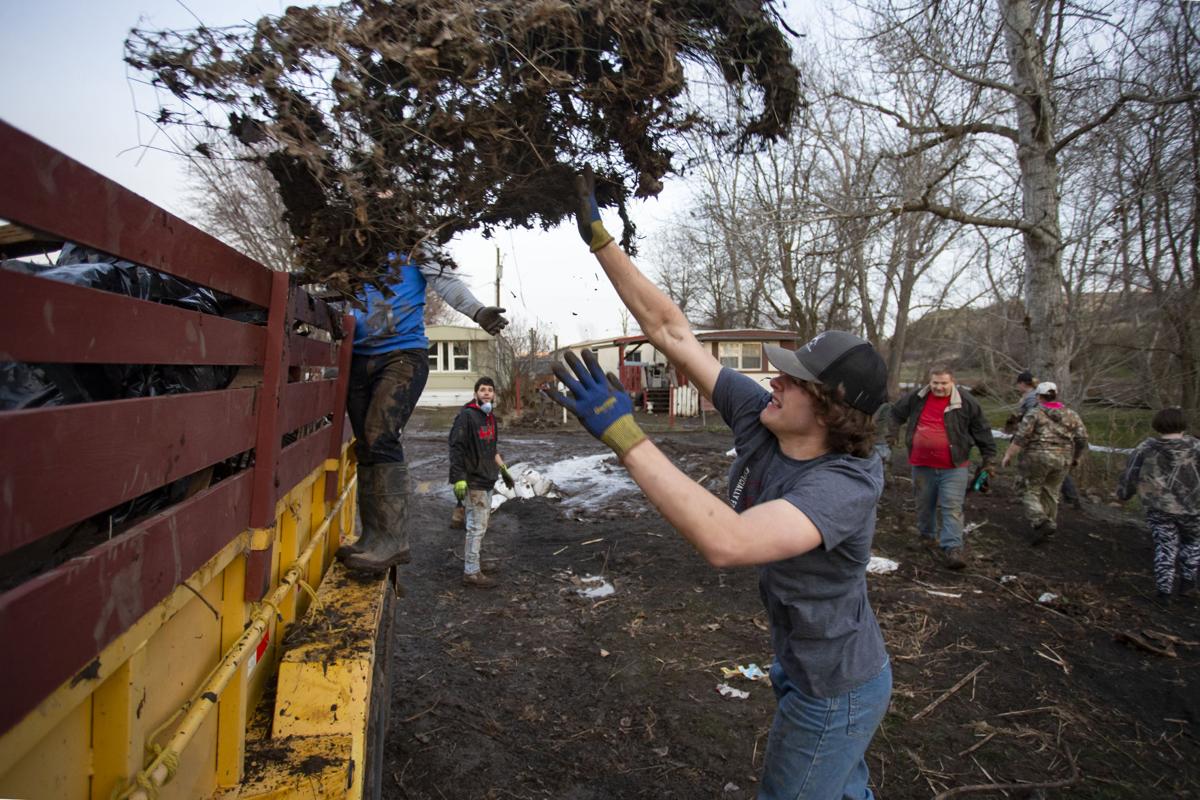 Pendleton High School student Sam Jennings throws debris into a trailer while helping to clean up the Riverview Mobile Home Estates in Pendleton on Sunday afternoon. 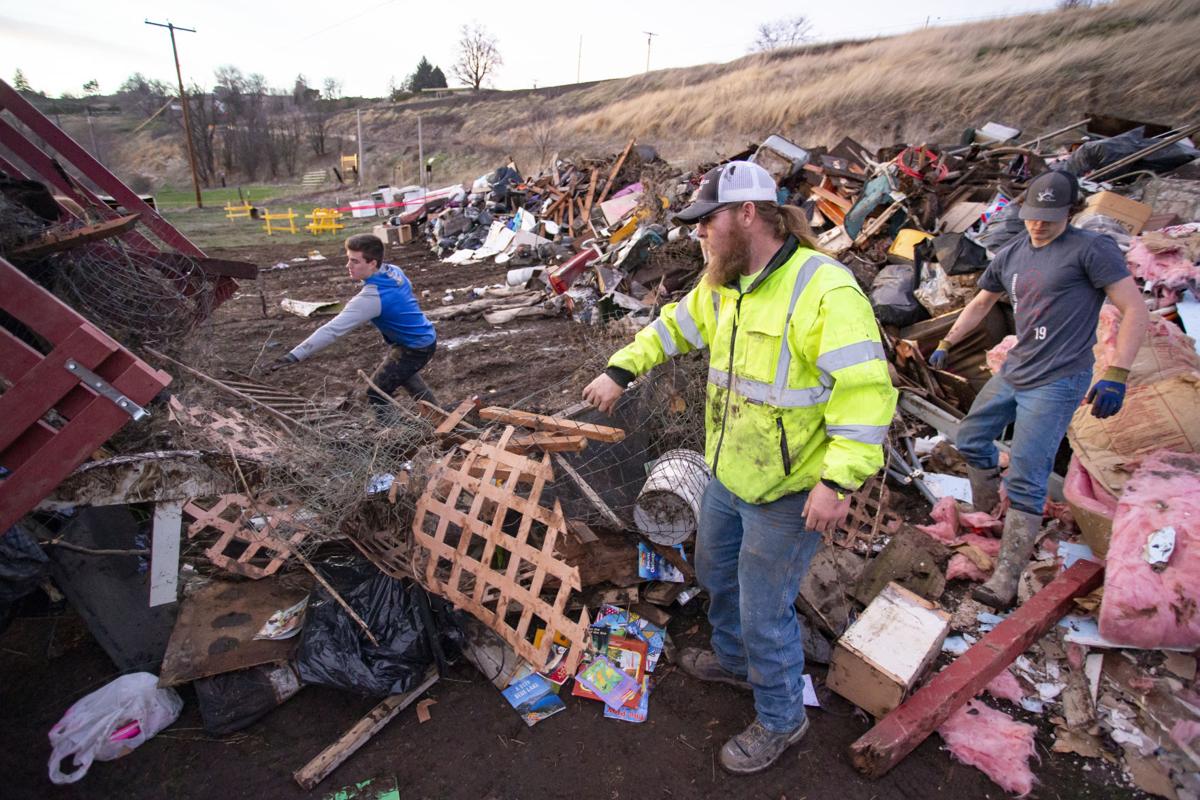 Volunteers dump a trailer at the temporary dump site in the Riverside neighborhood during cleanup efforts at the Riverview Mobile Home Estates in Pendleton on Sunday afternoon.

Pendleton High School student Sam Jennings throws debris into a trailer while helping to clean up the Riverview Mobile Home Estates in Pendleton on Sunday afternoon.

PENDLETON — More than 100 volunteers descended on the Riverside neighborhood on Sunday and Monday to assist residents in the cleanup of debris left behind by last week’s flood, according to a tally kept by the city of Pendleton.

Brooke Marshall rallied her family after church Sunday morning and headed out to the Riverside area with their pickup truck and a large trailer. In a matter of hours, she said, they had filled the trailer at least four times before having to stop when the dump site closed down at 5 p.m. Sunday.

“You hear about so much evil in the world,” Marshall said. “To see the community come together and support these people is just amazing.”

Marshall amassed more than a half a dozen volunteers to help load the truck and clear trash that residents had piled near the street for pickup. Sam Jennings, a Pendleton High School sophomore, was among those helping Marshall.

“It’s really cool to see everyone helping, but it’s hard because they’ve lost so much,” said Jennings. “One guy just told us to get rid of everything.”

Harley Hauck, who manages the Riverside Mobile Home Estates with his wife, Robin, said the help of the volunteers was key in starting to get the park put back together.

“The only reason this looks this good right now is how much everyone helped,” said Hauck. “There were so many people, it was chaos.”

Hauck said a group made up of city employees, volunteers and park residents helped clear debris and haul residents’ flood-damaged belongings to a dump site near Highway 11.

Despite extensive damage to his own home in the park, Hauck’s mind was on getting his residents back to their homes and the park back in order.

“My house can wait,” said Hauck. “My tenants come first, and then I’ll deal with my own place.”

In addition to removing water-damaged materials, crews dedicated time to clearing roads of mud and moving a shifted home that was blocking traffic within the park.

Pendleton Police Department Chief Stuart Roberts said volunteers were provided with color-coded maps in order to divvy up work accordingly and keep operations as organized as possible. Additionally, vehicles entering the Riverside neighborhood were monitored and residents’ trash piles were marked with pink paint to avoid confusion when removing debris.

“We didn’t want people posing as volunteers, searching for valuables and leaving with them,” he said.

Cleanup efforts were delayed Sunday afternoon when a piece of heavy machinery collided with a gas meter in the park, resulting in a gas leak that was quickly shut off, according to Roberts.

Ron Mayhorn, who has lived in the Riverview Mobile Home Estates for 27 years, said while he had never lived through a disaster like last week’s floods, it was impressive to see the community come together to help each other.

“I’ve always been a bit leery of having people in my home,” he said. “It’s strange having 20 strangers in my house helping, but we really needed the help.”

Mayhorn said he was amazed at the way that people came together to help clean up the Riverside neighborhood.

“It really brings people together,” he said.

While work parties were organized on Sunday and Monday at a tent along Highway 11, volunteers looking to aid in cleanup efforts throughout the week are asked to check in with the American Red Cross at the Pendleton Convention Center.

Despite the many hours of volunteer work over the weekend, Hauck said that it will likely be weeks before the park is fully cleaned up.

“I don’t think it’s hit a lot of people here yet,” said Hauck. “We’re just going to keep working out here until it’s done, though.”

PENDLETON — Patty Haid can pinpoint the exact moment her front deck washed away.