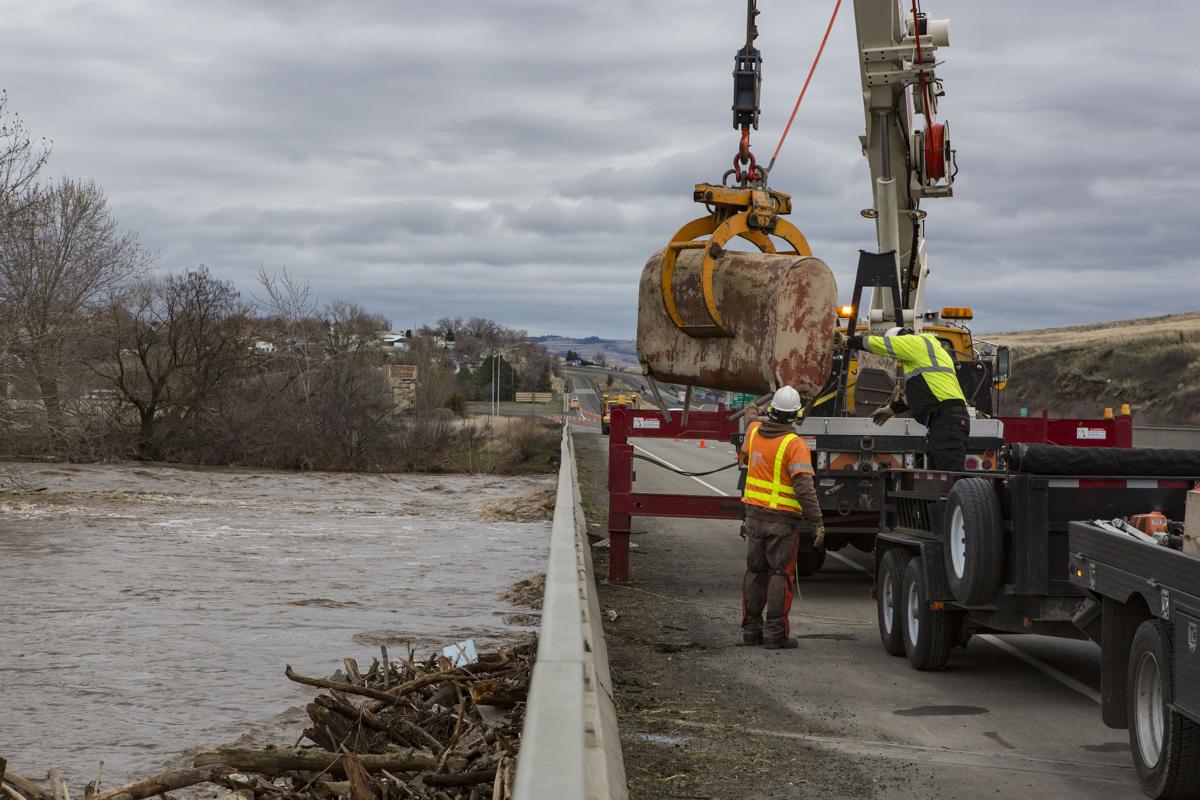 Oregon Department of Transportation work crews remove debris that washed against the I-84 bridge over the Umatilla River in Pendleton Friday evening. 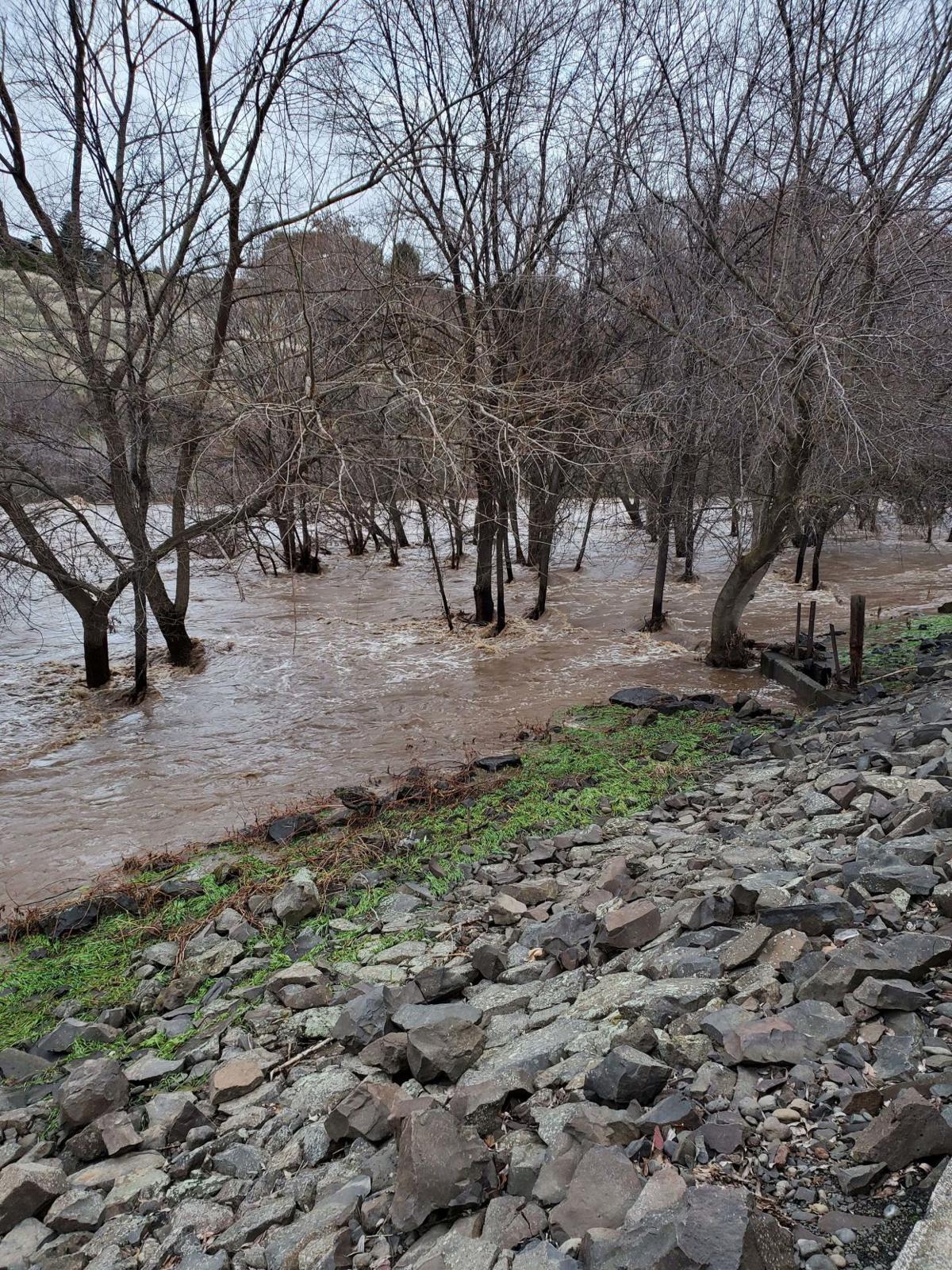 The Umatilla River continues to run high through Pendleton on Friday morning. Umatilla County Commissioner John Shafer said the county joined the Confederated Tribes of the Umatilla Indian Reservation and the city of Weston in declaring an emergency. Similar declarations are expected from Pendleton and Echo later today.

Oregon Department of Transportation work crews remove debris that washed against the I-84 bridge over the Umatilla River in Pendleton Friday evening.

The Umatilla River continues to run high through Pendleton on Friday morning. Umatilla County Commissioner John Shafer said the county joined the Confederated Tribes of the Umatilla Indian Reservation and the city of Weston in declaring an emergency. Similar declarations are expected from Pendleton and Echo later today.

PENDLETON — Flooding caused by rainfall in the Blue Mountains this week became a statewide issue, culminating with Gov. Kate Brown declaring a state of emergency for Umatilla, Union and Wallowa counties Friday afternoon at the urging of Eastern Oregon legislators.

“This is a historic flood for Umatilla County,” said Rep. Greg Smith, R-Heppner. “This is obviously a situation where mother nature is flexing.”

Smith said Friday that he, and other local lawmakers were “working diligently” at the current legislative session to appropriate general funds to aid in any needed flood repairs.

“We will continue to monitor the situation,” he stated. “My staff and I stand ready to help however we can during the recovery process.”

With the state’s help, emergency rescues and evacuations continued around Umatilla County into Friday evening, after the county, the Confederated Tribes of the Umatilla Indian Reservation, Pendleton, Weston, Echo, Stanfield and Milton-Freewater all declared states of emergency.

The Oregon Army National Guard confirmed that at least 10 people had been rescued between Thursday and Friday, including at least two emergency personnel in the Thorn Hollow area and others from roadways across the county. State of Oregon Search and Rescue Coordinator Scott Lucas was unsure of specific locations, but said as many as 30 soldiers were active throughout the county Friday.

“They’re standing by to assist,” he said.

By 5 p.m. Friday, Interstate 84 reopened after various closures, but a section between mileposts 182 and 188 remained closed. Other major roadways across the county and region also experienced closures, and Oregon Department of Transportation spokesman Tom Strandberg urged residents to check the department’s TripCheck.com website.

Although several communities declared an emergency on Friday, private property owners may still have to shoulder their own burden in the recovery effort.

Pendleton City Manager Rob Corbett told his city council that the declaration would allow the city ask for funds and assistance in cleaning up and repairing the aftermath of the flood. But organizations like the Federal Emergency Management Agency are unlikely to compensate property owners without flood insurance, he said.

Flood stages and precipitationThe Umatilla River crested at 19.8 feet Thursday night between 9-10 p.m in Pendleton, and by 5 p.m. Friday water had receded to about 16 feet, discharging at below 14,000 cubic feet per second, according to the Northwest River Forecast website.

“This is certainly a very rare event,” said Marc Austin, a NWS meteorologist in the Pendleton office.

At a press conference Friday afternoon, Austin said waters in Pendleton and Gibbon were anticipated to start receding Saturday morning, but that more precipitation could also slow that process.

“We may still see up to an inch of rainfall,” he said. “We do not expect it to cause anything like what happened (Thursday) night.”

In Gibbon, east of Pendleton, a secondary flood crest occurred Friday afternoon in the Umatilla River. By 5 p.m. Friday, river forecasts from the NWS showed water lowering to 11 feet and discharge occurring at about 8,600 cubic feet per second.

Along the Touchet River, close to Milton-Freewater, a secondary major flood crest also occurred and was projected Friday evening to decrease late into the weekend. At 5 p.m. Friday, water rose to about 20 feet, discharging at about 29,700 cfs and approached record observation, according to the Northwest River Forecast website. Water was projected to remain at about 20 feet through the weekend.

“It should be a downward trend,” he said. “(But) this is an extremely dangerous time.”

The Umatilla County Sheriff’s Office said Friday afternoon that families were stranded across the county, including in the Echo and Rieth areas.

East Umatilla Fire & Rescue Chief Davy Baty said Pine Creek, which runs through the middle of the city’s downtown, hit levels they hadn’t seen before and caused flooding to all the houses and businesses along the creek.

As of Friday evening, Baty said he was unaware of any people needing to evacuate their homes and that the city was coming together with up to 45 volunteers spending hours loading and delivering sandbags to those in need.

“We’re lucky to live in this place and around so many great people,” Baty said.

In a Facebook message from Sheila Riddle Jasperson, who works at Weston City Hall, she said a second load of sand and gravel arrived Friday afternoon and the city had stockpiled sandbags that people could grab for free at Memorial Hall behind the Post Office on 210 East Main St.

On the reservationNicole Carver and her family live on Mytinger Lane within the boundary of the Confederated Tribes of the Umatilla Indian Reservation. She said they all left their mobile home late Thursday night as floodwaters approached the home’s front steps.

“You could see the high-rising water down the road,” she said. “Within two hours, we were evacuating.”

She and her family will stay at her sister’s house for the weekend. She said her landlord was shocked by the amount of floodwater in the area, where she’d lived for 55 years.

The Confederated Umatilla Journal reported Friday evening that helicopters were spotted over the Nixyaawii Governance Center and rescues were being conducted, though the status of those missions was unknown.

As of 6 p.m. Friday, CUJ reported there were no injuries or fatalities on the Reservation and the tribes had appropriated $100,000 for those impacted by the flooding to get room rentals, food, equipment and more.

Power outages and water useBoth Umatilla Electric Cooperative and Pacific Power stated Friday afternoon that power outages occurred in eastern parts of Umatilla County, leaving a total of 258 customers between the two utilities without power as of 7 p.m. Friday. They did not offer an estimate for when power would be restored.

At a press conference Friday, County Public Health Director Joe Fiumara said residents using well water in the county should boil it for one minute before use or rely on bottled water. He warned people relying on septic systems in the area.

“If they’re being flooded they’re not going to work well,” he said. “Conserve water as much as possible.”

Fiumara added that due to increased water in wastewater treatment plants, and flooding in manufacturers across affected areas, chemical and biological components were likely in floodwaters.

City of Pendleton cautions against going near flooded areas

PENDLETON — Officials with the city of Pendleton are cautioning citizens from going into flooded areas.

In a news release issued Friday morning, city officials say that while they are very appreciative of the assistance being offered by those who have reached out to help, they are encouraging people to stay out of flooded areas and away from rising water.

“We will post to our social media and City Web page when the cleanup begins, at which time we will be encouraging the community to come together to help those who have been affected by the flooding,” read the statement.

Where to get help

For those who have been forced to leave flooded homes, the need for food, clothing, shoes, a warm blanket is essential. There are local agencies and organizations prepared to lend a helping hand.

The city of Pendleton has set up a shelter at the Pendleton Convention Center for those displaced by flooding. The shelter is administered by the Red Cross.  At this time, officials are advising against food donations at the shelter.

“We are encouraging people to not donate food, as Red Cross is leading the efforts and their policy is they cannot accept donated food to give to those they serve,” read a statement issued by the city. “We will notify people via website/social media when there is a need.”

A shelter has been set up at the Pendleton Convention Center, 1601 Westgate, in Pendleton. Anyone in need of assistance can simply show up for help. Find out information on what to bring to a Red Cross shelter here: https://www.redcross.org/…/disast…/find-an-open-shelter.html

Those wishing to volunteer or donate should contact Julie Taylor with the Department of Children and Family Services at 541-969-8413.

The college has opened “The Den” food pantry to provide food to students in need. Also if students and their family need a shower, BMCC has opened its athletic locker rooms and shower facilities. Trailers and RVs can also be parked on campus lots.

Walla Walla: The Walla Walla County Fairgrounds has a shelter for those affected in the Milton-Freewater area.

PENDLETON — The Pendleton City Council voted to declare an emergency on Friday morning, coming to terms with the fact that a significant porti…