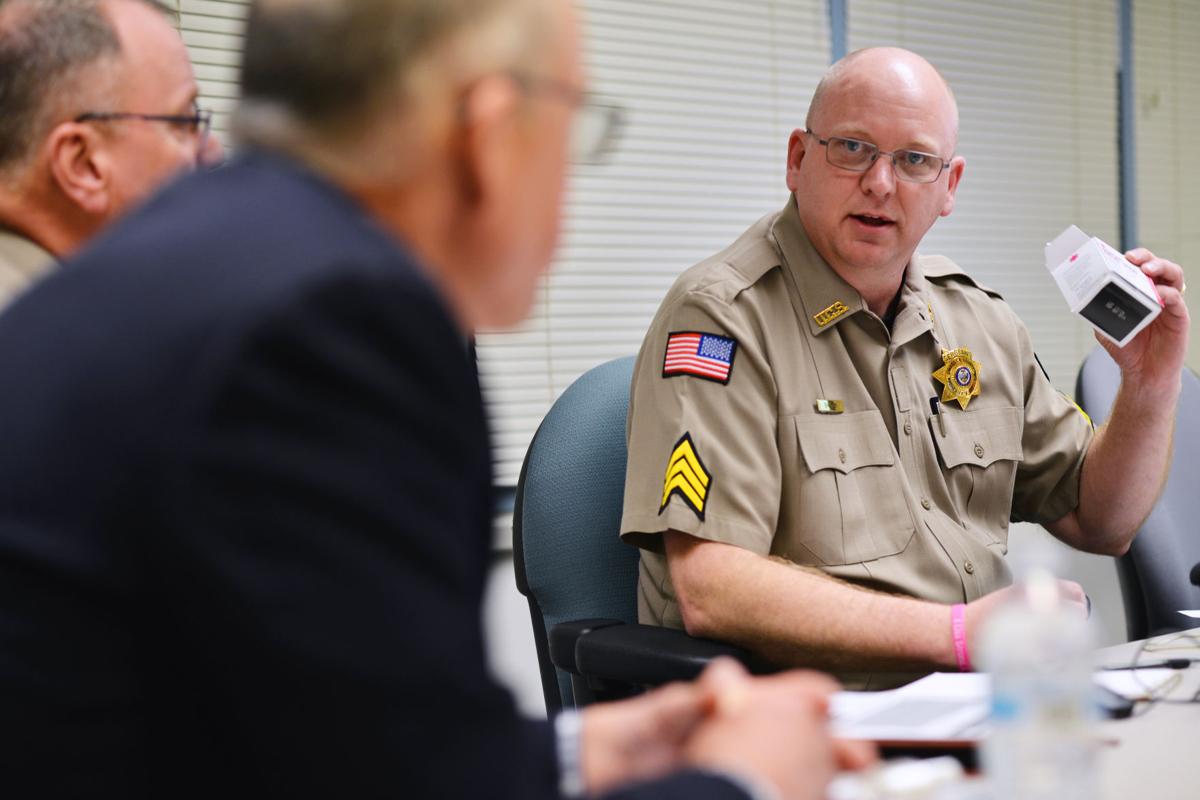 Staff photo by E.J. HarrisUmatilla County sheriff's Sgt. John Schafer holds up a box with a dose of the anti-opioid NARCAN while briefing U.S. Rep. Greg Walden during a round-table discussion on opioids Wednesday in Pendleton. 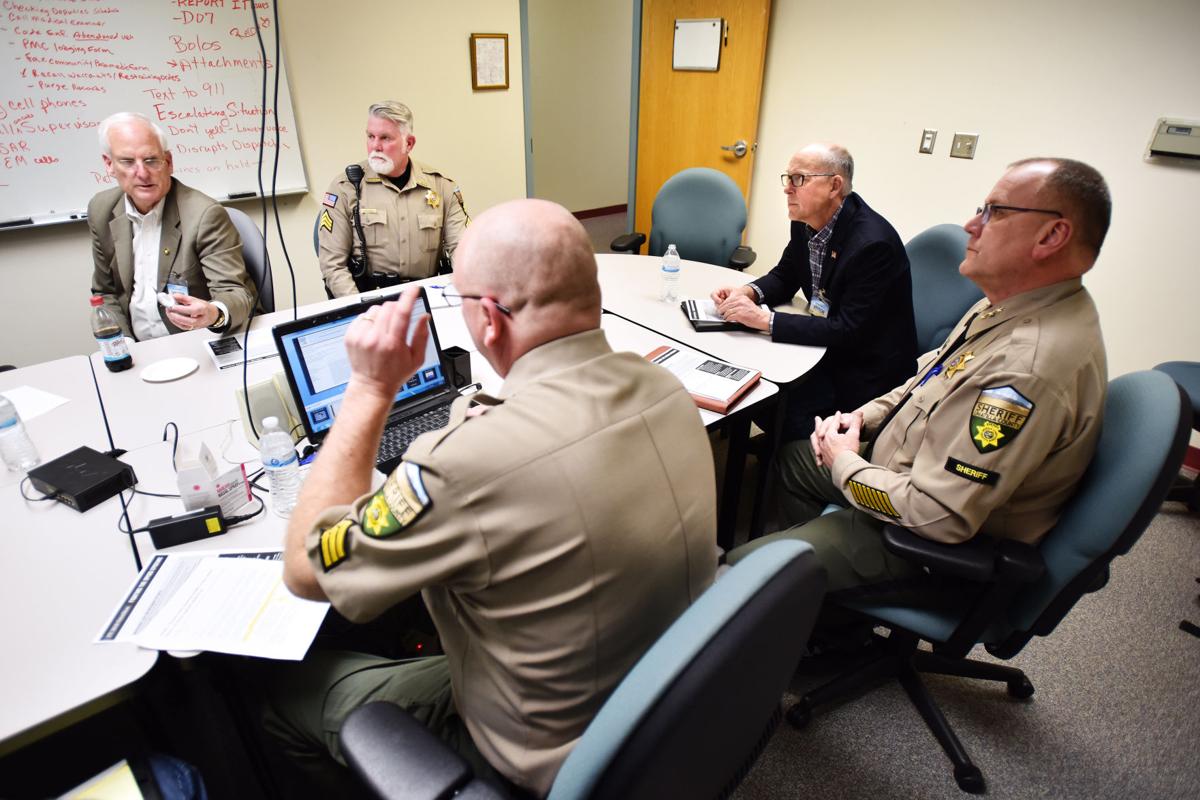 Staff photo by E.J. HarrisOregon Sen. Bill Hansell, left, inquires about the cost of a single dose of NARCAN nasal spray during a round-table discussion on opioids with U.S. Rep. Greg Walden, second from right, at the Umatilla County Sheriff's Department in Pendleton.

Staff photo by E.J. HarrisUmatilla County sheriff's Sgt. John Schafer holds up a box with a dose of the anti-opioid NARCAN while briefing U.S. Rep. Greg Walden during a round-table discussion on opioids Wednesday in Pendleton.

Staff photo by E.J. HarrisOregon Sen. Bill Hansell, left, inquires about the cost of a single dose of NARCAN nasal spray during a round-table discussion on opioids with U.S. Rep. Greg Walden, second from right, at the Umatilla County Sheriff's Department in Pendleton.

Rep. Greg Walden stared at a photo projected onto a large screen and shook his head slowly. The slide showed three vials, labeled with names of different opioid drugs. Each vial contained a dose lethal to humans.

The bottom of the heroin vial was covered with a white powder. Another vial, containing the powerful synthetic opioid called fentanyl, contained what appeared to be a pinch of the drug. The vial of carfentanil, a even-more-potent chemical cousin of fentanyl, held what looked like a grain of sand.

The Republican congressman from Oregon sat in a conference room Wednesday at the Umatilla County Sheriff’s Office with Sheriff Terry Rowan and other county law enforcement leaders, along with a couple of state legislators, Rep. Bill Hansell, R-Athena, and Greg Barreto, R-Cove. Informally, they chatted about what has become one of Walden’s favorite subjects of late — the opioid crisis. Walden encouraged the law enforcement leaders to talk about what they are seeing on the streets and how the epidemic affects police protocol.

“An officer from Ohio got some on his uniform and he brushed it off,” Shafer said. “It absorbed through his skin and he got sick. What saved him was Narcan.”

Narcan, the brand name of a drug called naloxone, is proving to be a invaluable tool for law enforcement. The medication reverses overdoses of opioid drugs such as prescription painkillers, heroin, morphine and fentanyl. County deputies recently began carrying Narcan on their duty belts.

The nasally administered Narcan is so safe that officers don’t need even to know for sure that someone is overdosing from opioids.

“When in doubt, you can go ahead and administer,” Rowan said. “There are no adverse effects.”

“How often in Umatilla County do you run into people who are overdosing on opioids?” Walden asked.

The epidemic seems to be creeping into every demographic from homeless person and soccer mom to rock star. Schafer waved his arm at the bottles glowing on the screen.

“Michael Jackson died of carfentanil,” he said, pointing to the bottle on the right. “Tom Petty and Prince both died of overdoses of fentanyl.”

The crisis rages in stars’ mansions, on the streets and in the house next door.

Walden, chairman of the House Energy and Commerce Committee, this month oversaw hearings on more than 20 bills designed to attack the opioid epidemic in a multifaceted way. He said the bills attack the problem on different fronts including education, treatment, regulation and research.

Walden lamented the shiftiness of those who dodge the laws as they manufacture potent opioids.

“They can change out a molecule and all of a sudden that’s not an illegal substance,” he said. “We’re trying to change the law so we can stay ahead of them instead of vice-versa. It’s a real challenge.”

The congressman cited other frustrations such as the discovery of massive shipments of painkillers that flooded into a West Virginia town of 2,900 people, enough for 5,624 pain pills for every man, woman and child there. He described a pill distribution point with lines so long, someone set up a hot dog stand. It’s an illustration of how crazy it has become.

Fighting such a scourge isn’t cheap. He said Oregon received $6.5 million from the Comprehensive Addiction and Recovery Act (CARA) that originated in the Energy and Commerce Committee. The recent budget deal will provide $6 billion nationally over two years. Those gathered with Walden will be interested to see if that is enough.

When Walden asked the open-ended question, “What do you need?” the sheriff responded.

“What it boils down to,” Rowan said, “is adequate funding.”