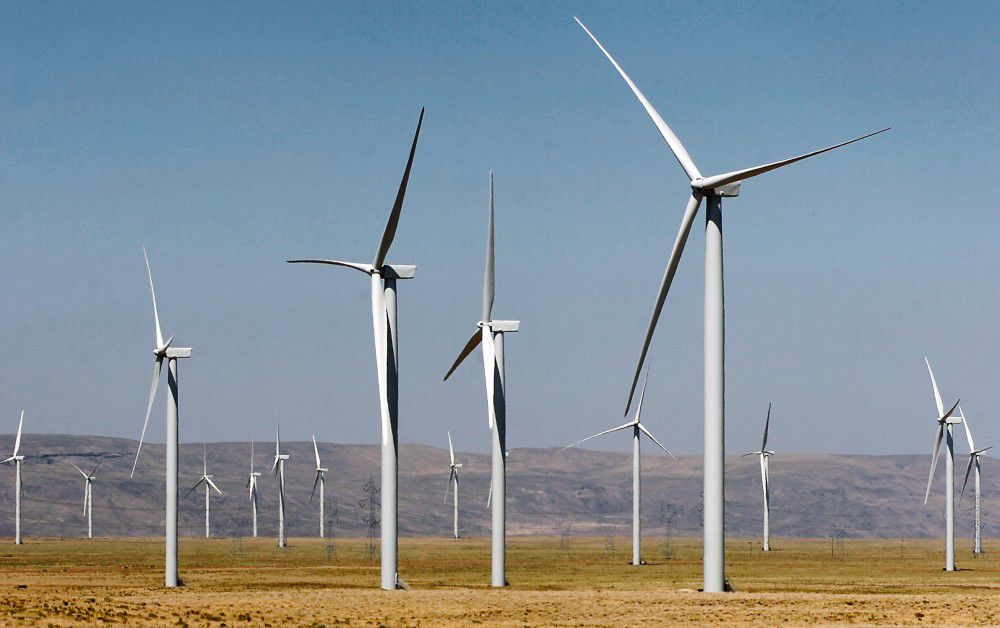 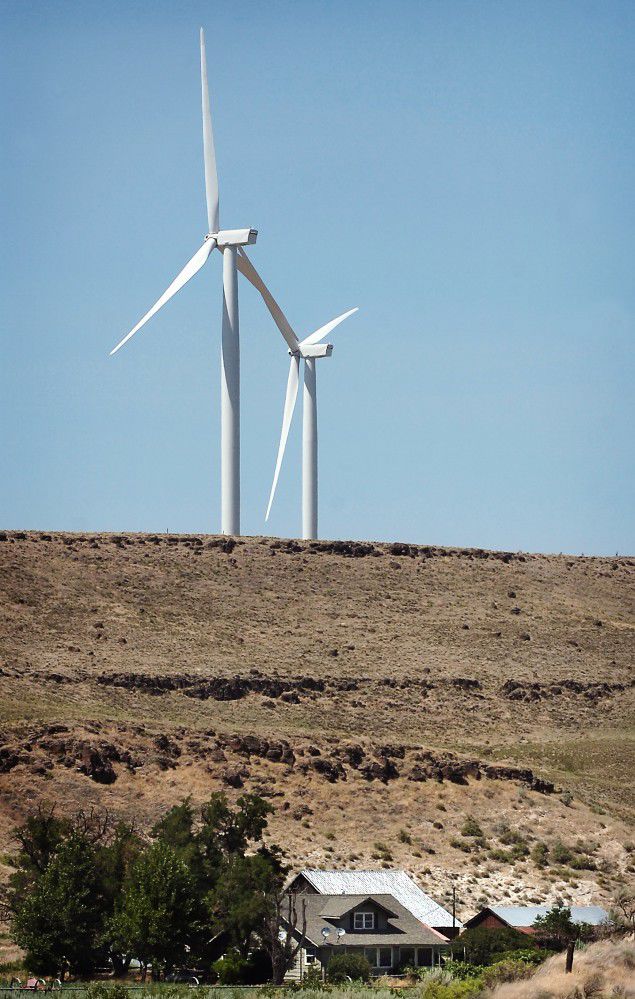 <p>Wind towers from Shepherd Flats wind farm rise up over a ridge behind a homestead along Willow Creek on Highway 74 near Ione.</p> 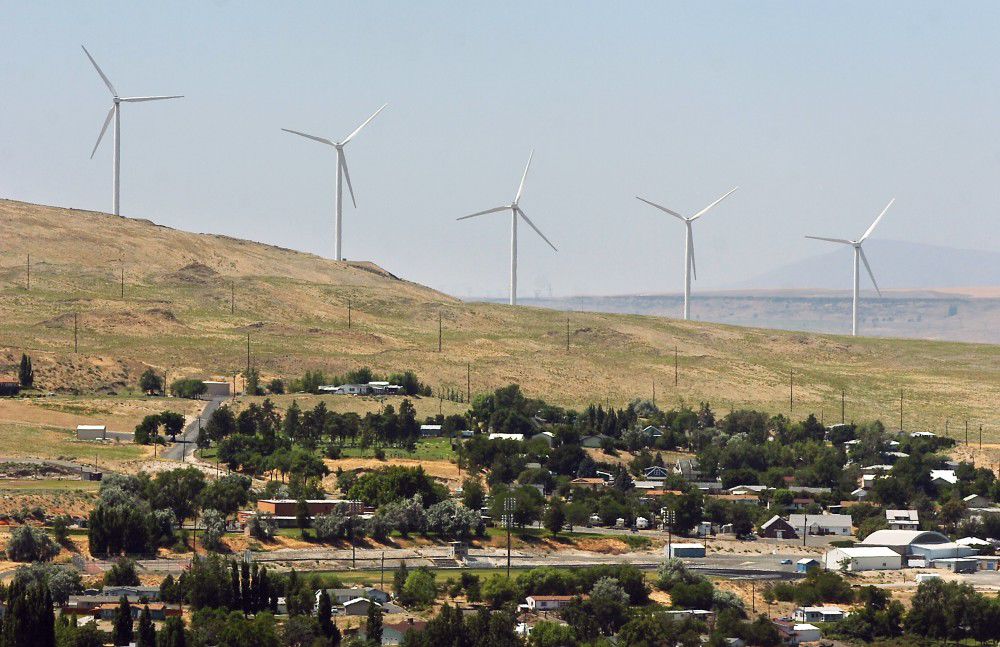 <p>Wind towers from the Rattlesnake Road wind farm sit atop the ridgeline overlooking the city of Arlington.</p> 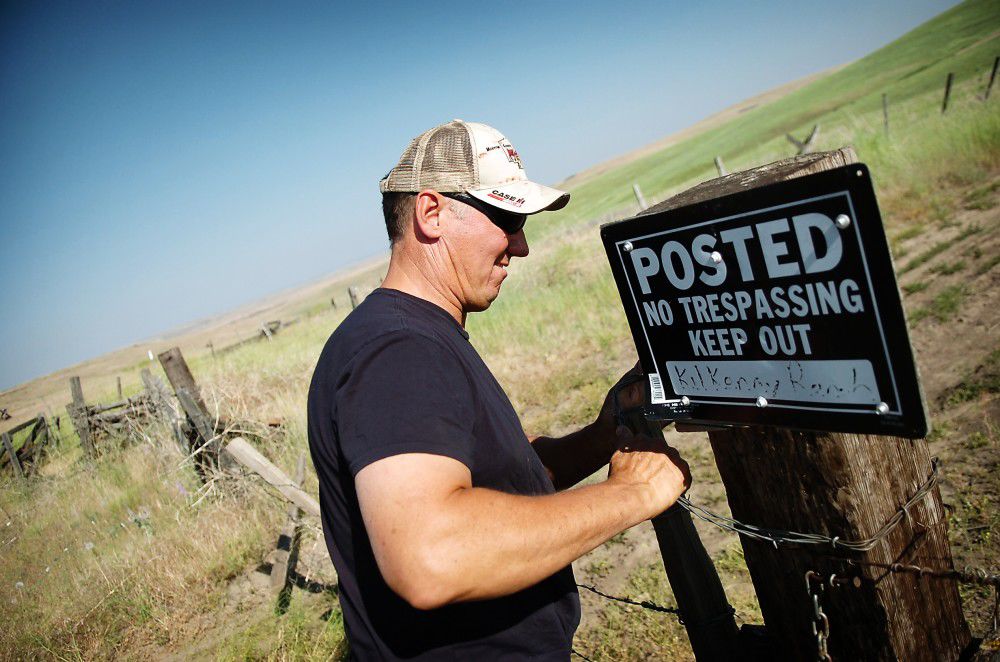 <p>Rancher John Kilkenny is looking to lease some of his land to wind developers on his ranch east of Heppner.</p> 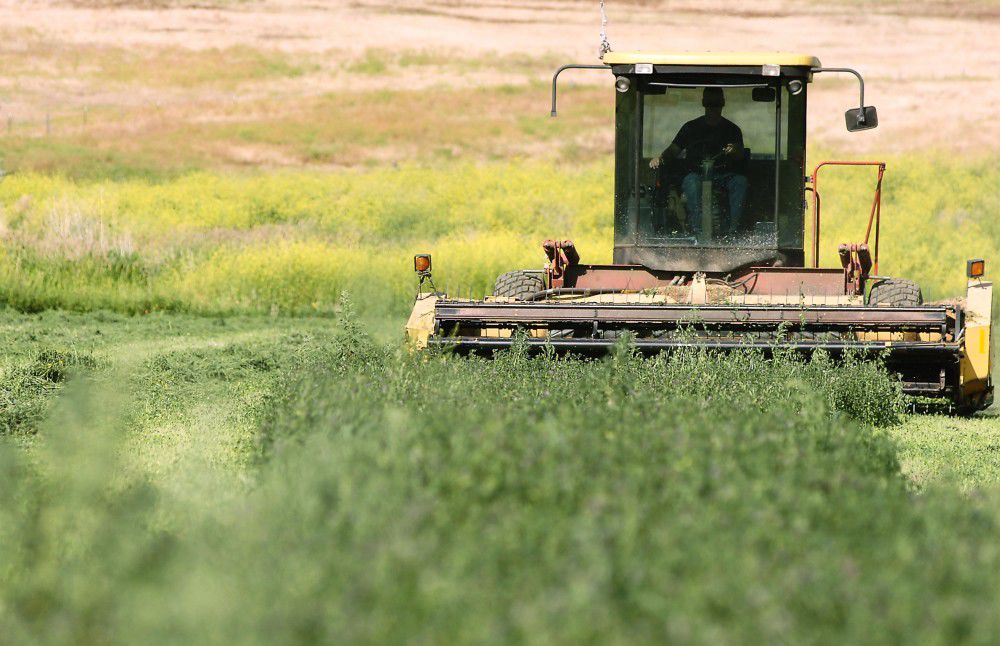 <p>Rancher John Kilkenny cuts alfalfa in a harvester Wednesday at his ranch outside of Heppner.</p> 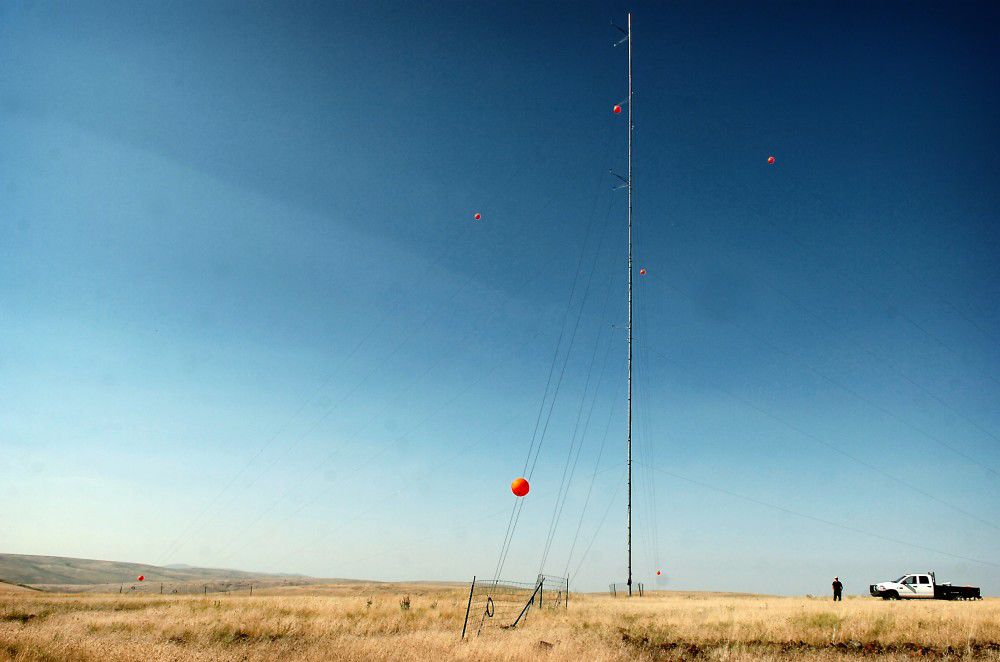 <p>Rancher John Kilkenny stands next to a testing tower for wind energy on his ranch east of Heppner.</p>

<p>Wind towers from Shepherd Flats wind farm rise up over a ridge behind a homestead along Willow Creek on Highway 74 near Ione.</p>

<p>Wind towers from the Rattlesnake Road wind farm sit atop the ridgeline overlooking the city of Arlington.</p>

<p>Rancher John Kilkenny is looking to lease some of his land to wind developers on his ranch east of Heppner.</p>

<p>Rancher John Kilkenny cuts alfalfa in a harvester Wednesday at his ranch outside of Heppner.</p>

<p>Rancher John Kilkenny stands next to a testing tower for wind energy on his ranch east of Heppner.</p>

The breeze is steady, growing stronger as the truck climbs closer to the top of the ridge.

I think they used to say 2,000 acres was all a guy needed to raise wheat and be a viable economic unit, but thats not the case anymore, said Kilkenny, owner of the Kilkenny Ranch, as he opened a barb wire fence  tumbleweeds caught in the wires.

He drives on, then stops at a tall, thin tower bristling with wind measuring instruments. A cloud of dust rises rises from behind the truck in slow motion, dissipating into the hot, mid-July heat.

We had interest in starting a wind farm, but nobody had been willing to come this far off the grid, Kilkenny said.

Kilkenny, Mark and Pam Wunderlich of the Double W Ranch and Running W Ranch and several other landowners in the area are hoping to do what many farmers and ranchers across Eastern Oregon have done in recent years. The landowners, who live east of Heppner near and around Hidden Creek, Willow Creek and Little Butter Creek, are planning to lease about 61,000 acres to Chicago-based Invenergy - a natural gas, solar and wind energy developer.

If completed, the project  still in the planning and permitting stages  could generate as much as 504 megawatts from up to 310 turbines that would supply clean, renewable energy to approximately 125,000 homes, an Invenergy spokesperson said in a previously released statement.

But finding a developer, completing the biological and cultural studies, getting through the siting process, and getting a wind farm built is a process nearly as complex as the technology that runs the turbines themselves.

Bent by the wind

For landowners, finding a developer capable of getting a project planned, sited, built and operating is a major challenge. The Wunderlichs have seen the whole range  from someone handing them a land lease through the window of a pickup to foreign companies with lotos of cash.

We were approached 10 years ago by a Japanese company, Pam Wunderlich said. They came out here in a helicopter and looked at a tree that we had up on the ridge that was bent by the wind.

Of all of the companies that have approached the Wunderlichs seeking rights to develop a wind farm over the past 10 years, about half were speculators. Pam said that speculators try and get the wind rights to the land for very cheap and then hold on to it without any intention of ever developing it.

Boomtown rats, Mark Wunderlich said. These guys are speculators. They can offer the moon to you and itll never happen.

Over the years, lease contracts came and went and landowners like the Kilkennys or the Wunderlichs never linked up with right developer.

Then about five years ago Kilkenny made contact with the company that wants to build the Heppner Wind Project. A team from Invenergy came to Kilkenny ranch in March 2008. They drove to the top of some of the ridges on the property and looked at the angle of the grass, Kilkenny said.

We were the original land owners that they contacted, Kilkenny said. Im friends with a lawyer thats done some work with Invenergy.

Soon after, Kilkenny and Invenergy began negotiating a contract  a process that took about three months. Throughout the process, other landowners in the area began to come involved with Invenergy as well. Other neighbors, including the Wunderlichs, came on board until the project had grown from its original 150 megawatts to 502 megawatts.

In order to make the economics of the thing work they had to expand it, Kilkenny said.

Due to nondisclosure agreements, neither the landowners or Invenergy would discuss the lease royalties that, should the project be built, Invenergy will pay the landowners. All the landowners interviewed for this story said that the income would offer a significant new revenue stream but wouldnt replace farming or ranching as their primary revenue generator.

In order to pay the costs of producing crops or livestock each year, most landowners take out agricultural loans at the season start, and pay back the loans at years end when the crops and stock are sold. That loan represents substantial overhead for farmers and ranchers, said Jeff Bailey, president and CEO of the Bank of Eastern Oregon. Our line of credit for ag operating loans probably runs from $25,000 to over $2.5 million, he said. I would say that the average line of credit is in the $250,000-$500,000 range. Its a very capita intensive operation.

Working the land is a thin proposition, the returns are weighed against the costs and those costs can fluctuate, whether the going price paid for commodities or the price of fuel.

Ranching and farming is so marginal, Pam Wunderlich said. Were working with a skeleton crew. We all work, but our ranch supports five families.

The long-term lease payments generated by wind farms give producers an edge against their changing costs and revenues,not to mention the ups and downs that mother nature gives them, he said.

Kent Madison, owner of Madison Farms, which is part of the Echo Wind Project, has had turbines running on his property since October 2008. Lease payments for larger model wind turbines amount to $5,000-$7,000 per machine per yer, he said.

Its a supply and demand industry. Madison explained. Society says that we want renewable energy. Its the same reason that a rancher wants to raise cows because somebody wants to cook a beef patty.

But the path from filing the first notice of intent and the first round of public meetings, just finished in the case of the Heppner Wind Project, to turbines blades turning can be time consuming.

According to Oregon law, counties may approve a proposed energy project that produces less than 105 megawatts. Larger projects are sited by the state Energy Facility Siting Council, a branch of the Oregon Department of Energy.

The state held two informational sessions on the Heppner Wind Project last week, one in Stanfield, the other in Heppner, where residents of Blake Ranch, a subdivision in the project shadow, turned out to express their displeasure. Within the next few months, the energy department may issue a project order.

"As far as the project order, the timing on that is dependent on the comments," said energy department spokesman Cliff Voliva. "If there are a lot of comments that point to some deficiencies, then its going to take longer than normal."

In its notice of intent, Invenergy said it plans to apply for the site certificate in March 2013. The application will consist of volumes of biological and cultural studies in the project area, as well as impact analysis of everything from electromagnetic fields caused by the transformers to seismic hazard mitigation strategies. The studies are payed for by the developer.

The application for site certificate is reviewed not only by the Oregon Department of Energy and its project consultant, but by other state and federal agencies, Native American tribes, and private interest groups such as Oregon Natural Desert Association, Sierra Club and National Audubon Society, Voliva said. Insufficient or improper work on these studies would not likely pass by these groups. Additional studies would cost the developer time and money.

After the application is submitted, the siting council begins a comprehensive analysis that can take a year or more. The council could request that the developer make changes to the application, add more information or address concerns raised by the public or the council.

Even if the project receives a site certificate, other questions remain. According to Invenergy, the Heppner project requires 39-46 miles of transmission lines to connect the wind farm to the grid at a point near Stanfield, a multi-million dollar investment.

Invenergy is in talks with the Bonneville Power Administration to build a substation near Stanfield but says the utility?hasnt decided where or when to build it.

Furthermore, Invenergy has yet to sell the power that the turbines would generate. A?wholesale producer, Invenergy sells to utilities only. Bids are due to Portland General Electric in November, but Invenergy project manager Thomas Metzger is cautious.

We dont win one of those contracts unless we give them the lowest power price, he said. If Portland General says they dont need power until 2016, we cant sell them power in 2013.

Back at the ranch, Pam Wunderlich is optimistic the turbines will rise. One thing she and Mark will do with the lease payments is hire three or four full-time employees.

Kilkenny has thought about the future of his ranch as well.

I dont expect my life to change as far as what were doing every day, he said. Ill sleep better.